Although humanity is destroying the planet quicker than Mother Nature can recover, fortunately, there are still natural wonders in this world that have survived for thousands of years.

All of the trees on this list are/were at least 3,500 years old — unfortunately, a few of these ancient giants were destroyed by human hands.

The rest of the surviving trees on this list are protected to prevent their destruction and one of the oldest individual trees even has a secret location not disclosed to the public. With continued conservation efforts, hopefully these trees will live for thousands of years more. 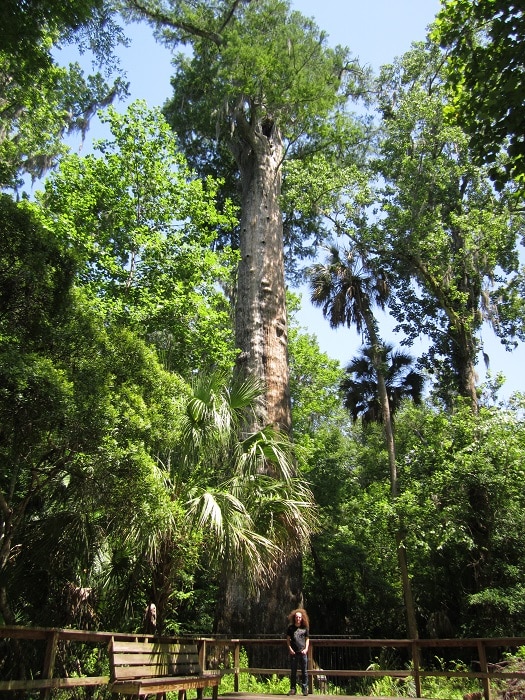 The Senator was one of the oldest and biggest bald cypress trees in the world with an estimated age of 3,500 years.

Unfortunately, the Senator was destroyed by a fire in 2012, which was started by Sarah Barnes and a friend who were smoking inside the tree; she left the fire burning which destroyed the tree from the inside out.

Did You Know?
In 2013, a group of artists were given permission by Seminole County to make vases, pens, flutes and sculptures from the charred remains of The Senator to pay respect to the fallen tree. 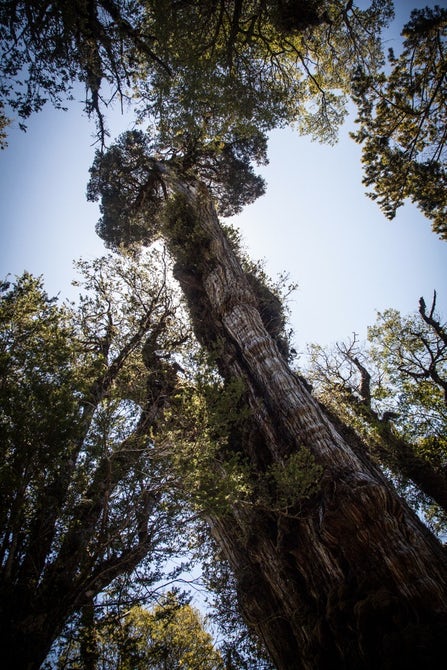 The Gran Abuelo (Spanish for “great grandfather”), which is located in the Alerce Costero National Park in Chile, is the oldest living tree in South America. The tree stands at more than 60 m tall (196 ft) with a diameter of 4 m (13 ft) and a perimeter of 11 m (36 ft).

Gran Abuelo’s age was determined in 1993 after researchers used a growth ring to verify its antiquity — they estimated that the tree was around 3,622 years old at the time.

Patagonian Cypresses are known as Alerce in Spanish and contain special resins that help the trees decompose slowly, even when buried or in water. This is why the Patagonian Cypress is endangered and why many of the Gran Abuelo’s fellow Alerces have been cut down and turned into building material. 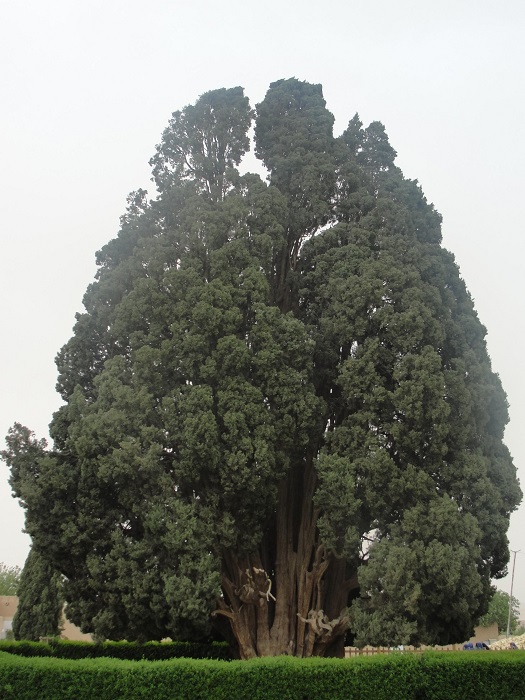 The Sarv-e Abarkuh (Abarkuh Cypress) is believed to be one of the oldest trees in the world as its age is estimated to be between 4,000 – 5,000 years. It is hard to place an exact age on the tree, but it has been cultivated for many years.

Legend says that the Sarv-e Abarkuh was planted by Zoroaster, an Iranian prophet, or Japheth, the third son of the Biblical figure Noah.

The Sarv-e Abarkuh is a national natural monument and is protected by the Cultural Heritage Organization of Iran. The tree’s large size and legendary history and age have made it one of the most popular attractions in the city of Abarkuh.

Did You Know?
In 2008, the Department of Environment of Yazd Province was working to ensure that the Sarv-e Abarkuh would be protected and nominated the tree to UNESCO’s World Heritage List. 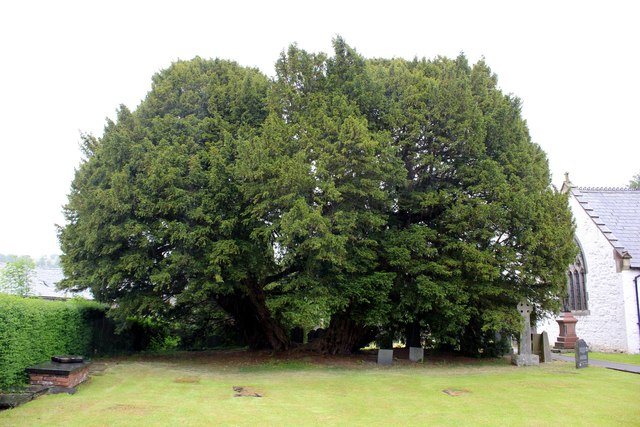 The Llangernyw Yew‘s age is estimated to be between 4,000 – 5,000 years old. Dating yew trees is often difficult as the core has been lost, with several large offshoots growing out of the tree’s central area.

The yew is located in the churchyard of St. Digain’s Church in the Llangernyw village and the church has a certificate signed by David Bellamy, English botanist, author, broadcaster, and environmental campaigner, saying the tree is 4,000 – 5,000 years old based on thousands of years of written records.

This ancient tree holds a special place in Welsh mythology as it is associated with the spirit Angelystor (the “Recording Angel”) who comes every Halloween to foretell which of the parishioners will die the following year.

In 2002, the Tree Council named the Llangernyw Yew one of the Fifty Great British Trees in celebration of the Golden Jubilee of Queen Elizabeth II. 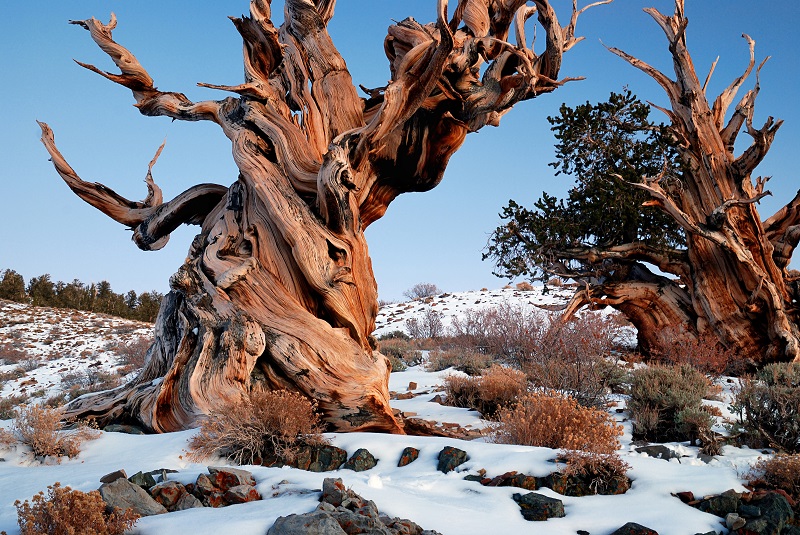 Until 2012, Methuselah was the oldest known tree in the world and its age (4,789 years at the time) was discovered in 1957 by Tom Harlan and Edmund Schulman.

The tree is named for the oldest Biblical figure, Methuselah, who lived to be 969 years old.

This ancient tree grows in Methuselah Grove in the White Mountains of Inyo County, California, where it is surrounded by other ancient trees, and its exact location is unknown to the public to keep the tree safe from vandalism.

Based on the tree’s age, it is estimated that Methuselah germinated around 2832 BCE, making it older than the famous Egyptian pyramids.

In 2003, a tree farmer named Jared Milarch received permission to take cuttings from Methuselah and was successful in cloning the old tree. 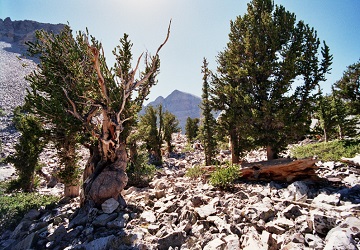 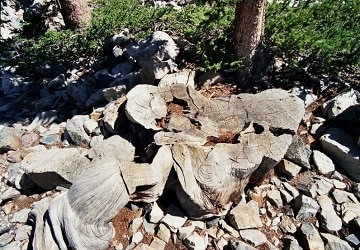 Prior to its demise in 1964, Prometheus was one of the oldest trees in the world and at the time, it was even older than Methuselah. The tree was located in a grove of several old trees in Wheeler Park, Nevada.

In 1964, geographer Donald R. Currey was given permission from the Forest Service to take a core sample of the tree to determine its age, which he suspected was over 4,000 years.

Unfortunately, Currey’s extraction went awry and the entire tree was cut down.

Researchers counted 4,862 growth rings on the core sample, but estimate that the tree may have been at least 4,900 years old as it likely did not grow a ring every year due to the area’s harsh conditions.

A slab of Prometheus is on display at the Great Basin Visitor Center, where the public is welcome to count the tree’s rings. 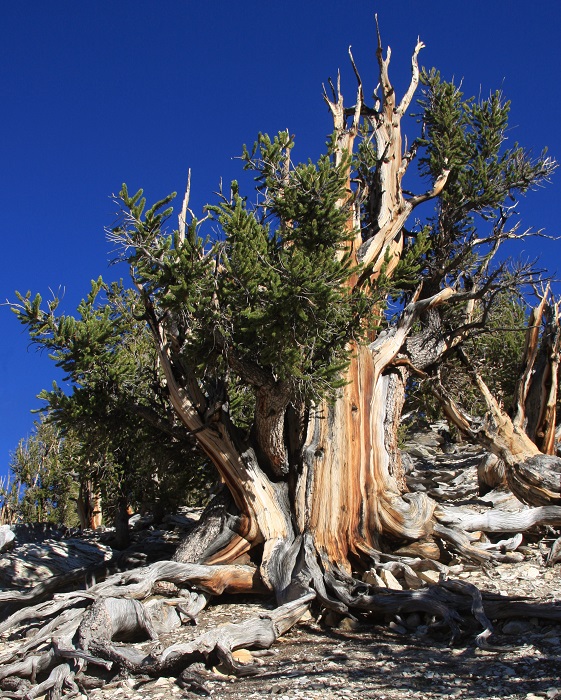 The tree was cored by Edmund Schulman in the late 1950s, but he did not have a chance to date his sample before he passed away in 1958.

The tree’s age was later determined by Tom Harlan in 2010, who was working on the samples Schulman collected before he also died. Before his death, Harlan reported that the tree was still alive and that it was 5,062 years old.

The unnamed Great Basin Bristlecone Pine recently had its confirmed status revoked in 2017 after researchers said that Tom Harlan’s core could not be located at the Laboratory of Tree-Ring Research so the tree’s current age cannot be confirmed.

Other Older Trees Worth Mentioning

The following trees didn’t make the cut for the main list because they’re all clonal colonies or clones. This means that the trees are self-replicating clones. The new growth in the trees produces a trees that are genetically identical to the original tree. Because of this, their root systems are tens of thousands years old. So, depending on how you look at it, the following trees are some of the oldest in the world and definitely worth a mention. 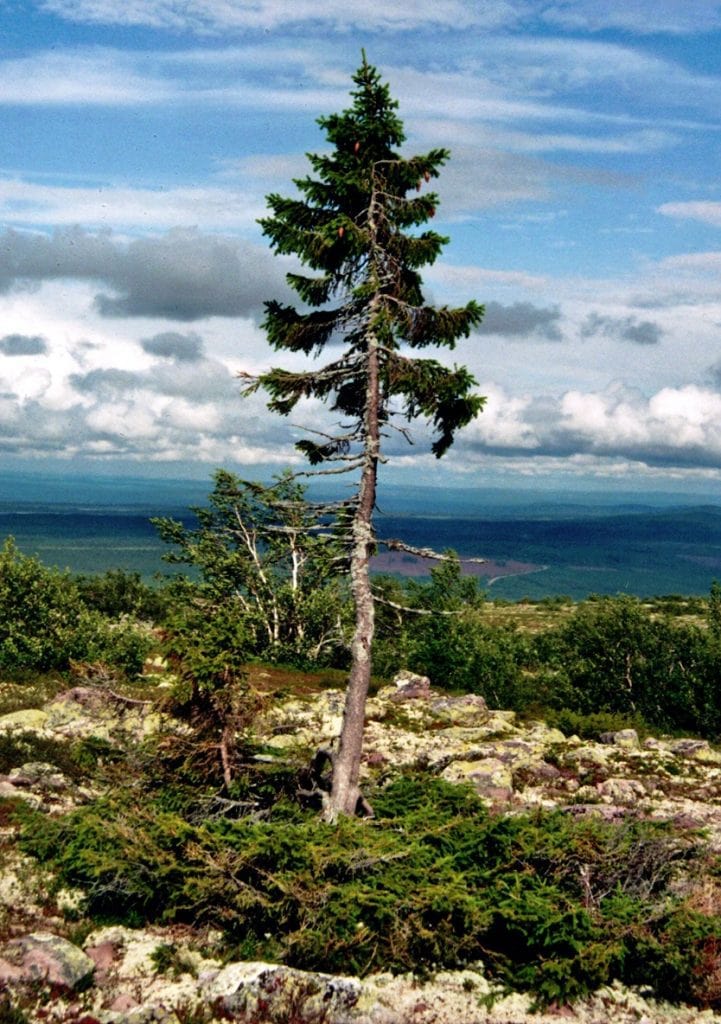 Like both of those older trees, Old Tjikko is also a clone, but it isn’t a colony like Pando and the Jurupa Oak — instead, Old Tjikko regenerates new trunks, branches, and roots in the same spot.

The root system of Old Tjikko is about 10,000 years old, while its trunks usually only survive for about 600 years before a new clone tree resprouts in its place.

Did You Know?
Old Tjikko’s age shows that the climate in Sweden had probably warmed much earlier than scientists previously estimated and that the tree was most likely brought to the area by migrating humans. 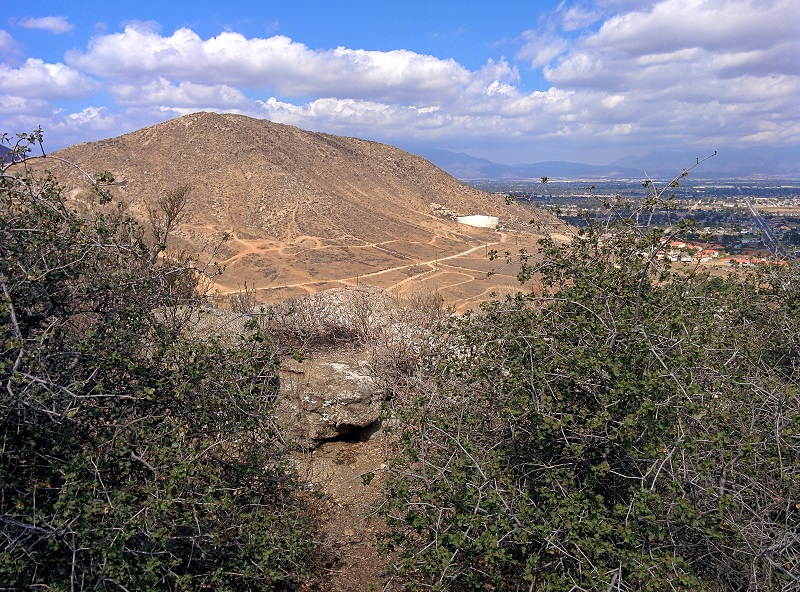 The Jurupa Oak (the tree’s name; it is a Palmer’s Oak) is another clonal colony tree that has survived for thousands of years by cloning itself. Only discovered within the past decade, the Jurupa Oak is over 13,000 years old. It is now the oldest oak tree ever and one of the oldest trees in California.

Its age was estimated by researchers based on the size of the colony and the growth of individual stems.

Another unique thing about the Jurupa Oak is that it is the only Palmer’s Oak in the area because the species typically prefers to live in wetter and more mountainous areas — the Jurupa Mountains are arid and at a lower altitude.

Did You Know?
Although the Jurupa Oak was observed to be covered with flowers, which are the sexual organs of plants, it has not been sexually reproducing at all and only continues to make clones. 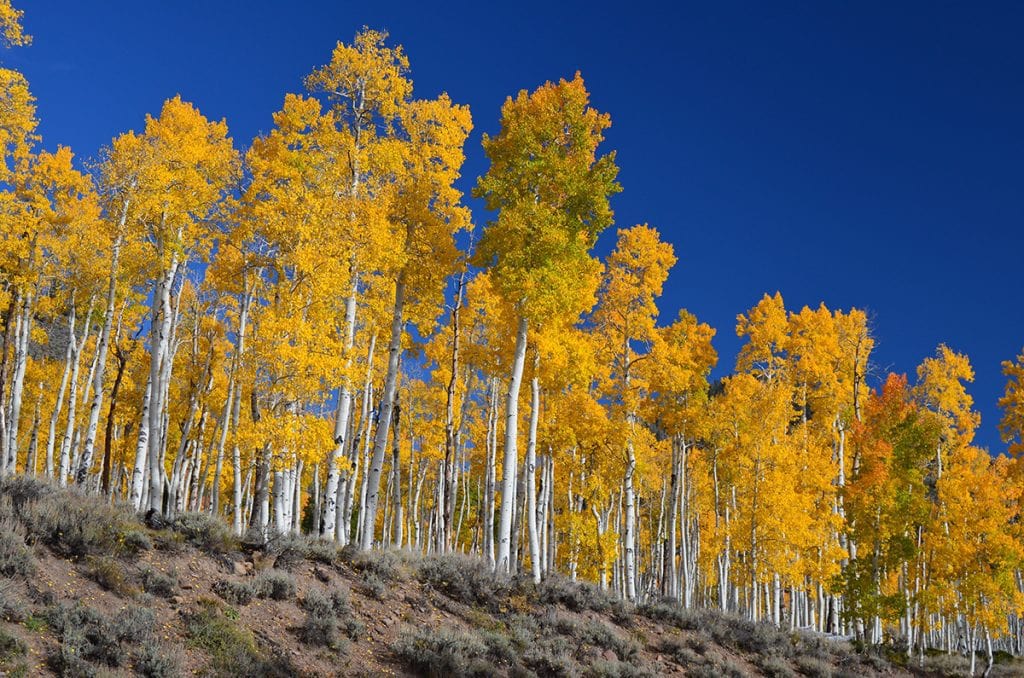 With an estimated age of over 80,000 years, Pando is technically one of the oldest trees in the world as well as one of the oldest living organisms. While most of the other trees on this list are individuals, Pando is a clonal colony that shares one underground root systems.

Above ground, Pando may look like a grove of individual trees, but they are all genetically identical clones.

Did you know?
Pando has survived for so long because it has been able to continuously clone itself. However, researchers have recently said that Pando may be dying.

Studies of Pando show that the tree has been declining for decades in size and has slowed down with producing replacement trees. Human development in the area as well as overgrazing of young trees by local animals have contributed to Pando’s possible death. 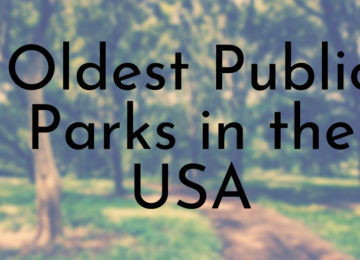 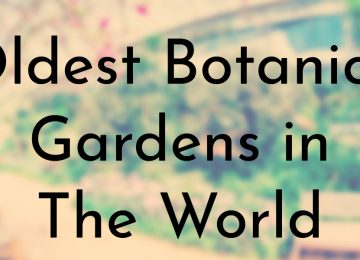 9 Oldest Botanical Gardens in The World

Posted by Lauren Johnson 0
The development of botanical gardens, which are primarily used for scientific research, is linked to the emergence of botany during…