California is home to some of the largest and most famous trees in the world, the Giant Sequoias of the Sierra Nevada. Not only are these trees some of the largest in the world, they are also some of the oldest. Nearly all of the trees on this list are Giant Sequoias, but the two oldest are a Palmer’s oak and Great Basin Bristlecone Pine. All of these trees have survived for thousands of years and fortunately most are still alive.

In the past, General Sherman was also known as the Pin Cushion Tree because visitors competed to see who could pin a dart (with their name attached) highest on the tree.

9. Mother of the Forest 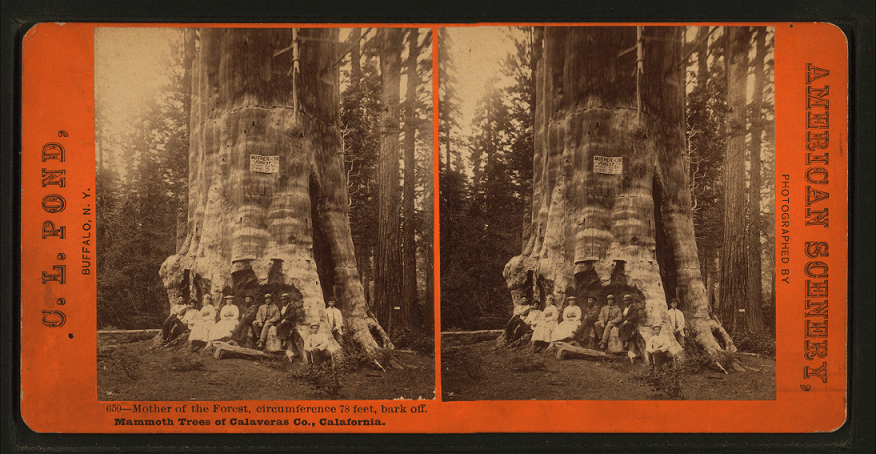 While a few of the other trees on this list have been in tough situations that have irreparably damaged them, none have faced as tragic of a demise as the Mother of the Forest. This beautiful and ancient tree’s massive size – said to have been 328 feet (100 meters) tall and 93 feet (28 meters) in girth – was both a blessing and a curse.

The only good thing to come out of the destruction of Mother of the Forest and other big trees in the area was a move toward conservation efforts, which eventually became the Yosemite Grant that protects the Giant Sequoias of California. 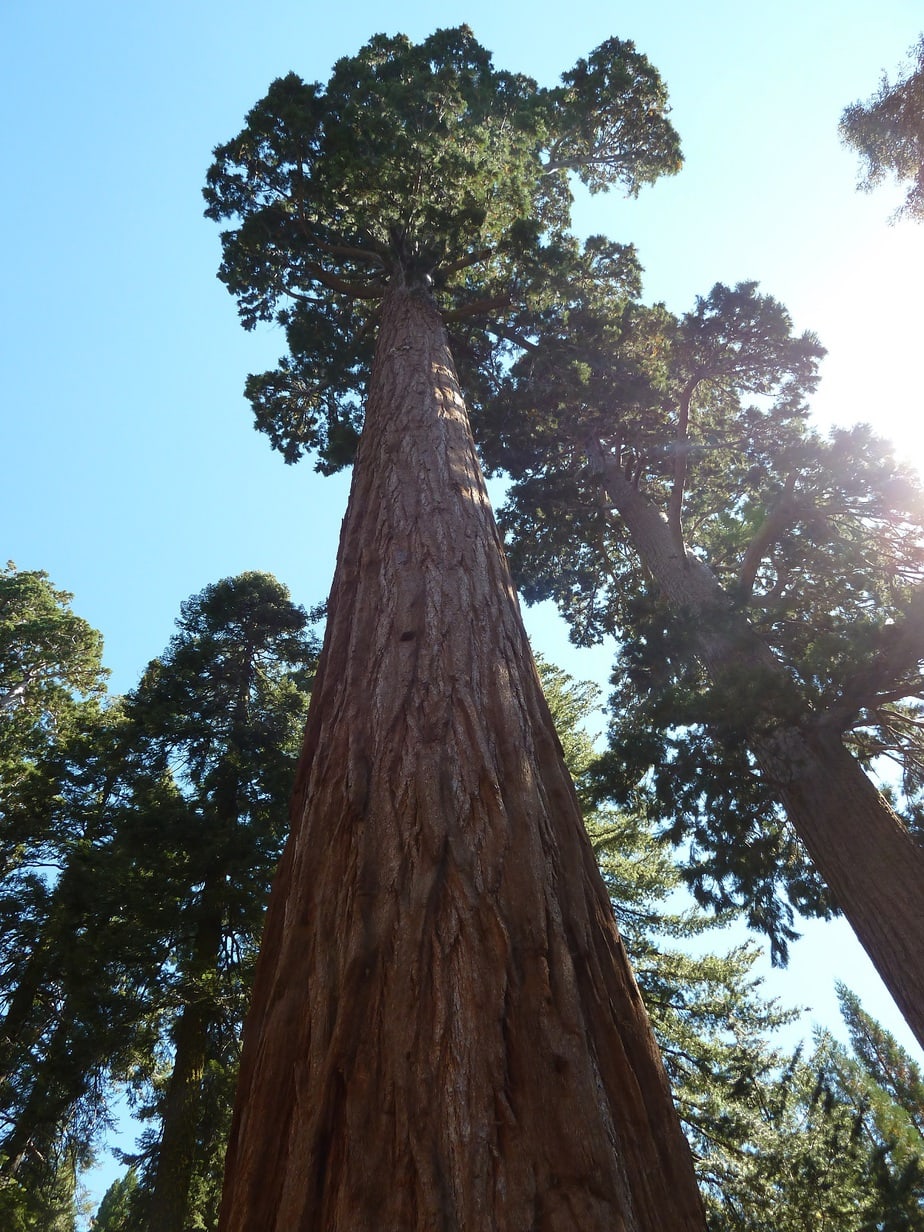 The Robert E. Lee tree, not to be confused with the General Lee in the nearby Giant Forest of Sequoia National Park, is the second largest tree in General Grant Grove and all of Kings Canyon National Park. This giant sequoia stands at 254.7 feet (77.7 meters) and is overall one of the largest/tallest trees in the world. The Robert E. Lee is currently over 2,600 years old. 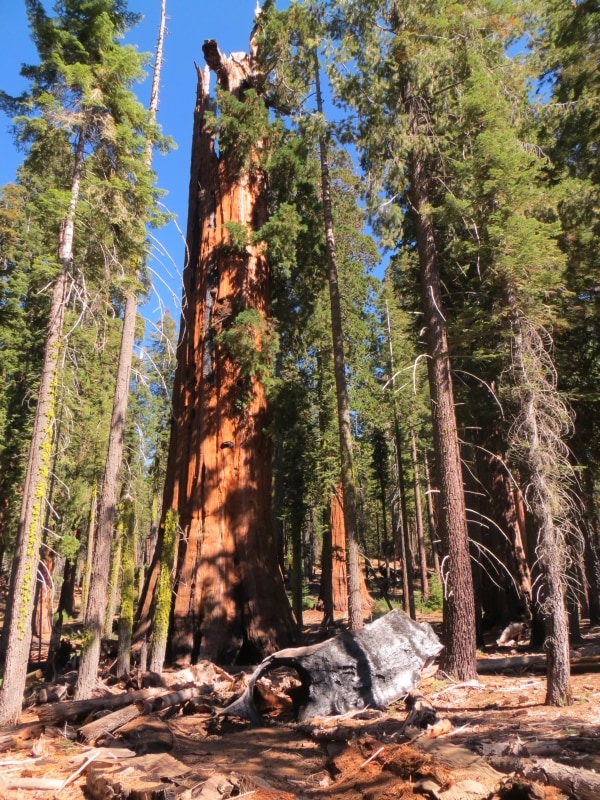 Before part of its crown was lost in a fire in 2003, Washington was the world’s second tallest tree, after General Sherman, at 254 feet (77.4 meters). Washington was reduced to 229 feet (69.8 meters) and still one of the tallest trees. Unfortunately, in 2005, Washington was severely damaged again following winter storms. Since then, Washington is only about 115 feet (35 meters) tall. While it may not be that tall anymore, Washington is still quite old and is estimated to be about 2,850 years old.

The Washington still has about a half dozen significant branches of foliage, so technically the tree is still alive and scientists don’t know if it will die soon or live for many more centuries. 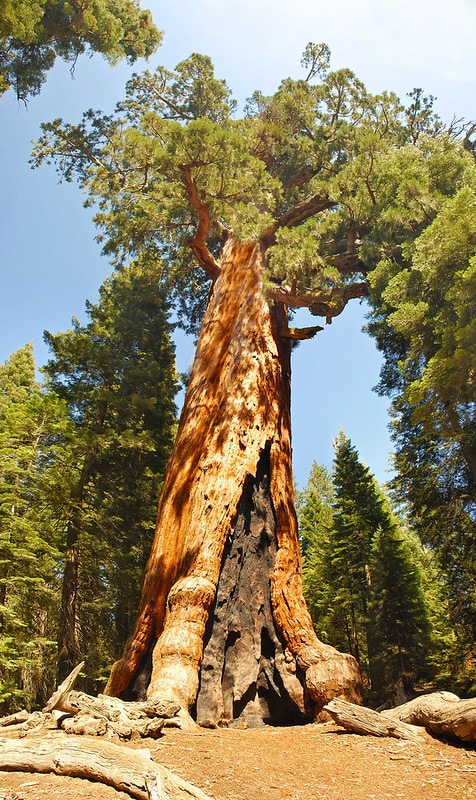 Grizzly Giant has a volume of about of 34,005 cubic feet (962.9 m3). While this might seem like a lot, Grizzly Giant is only the 25th largest tree in the world by volume. 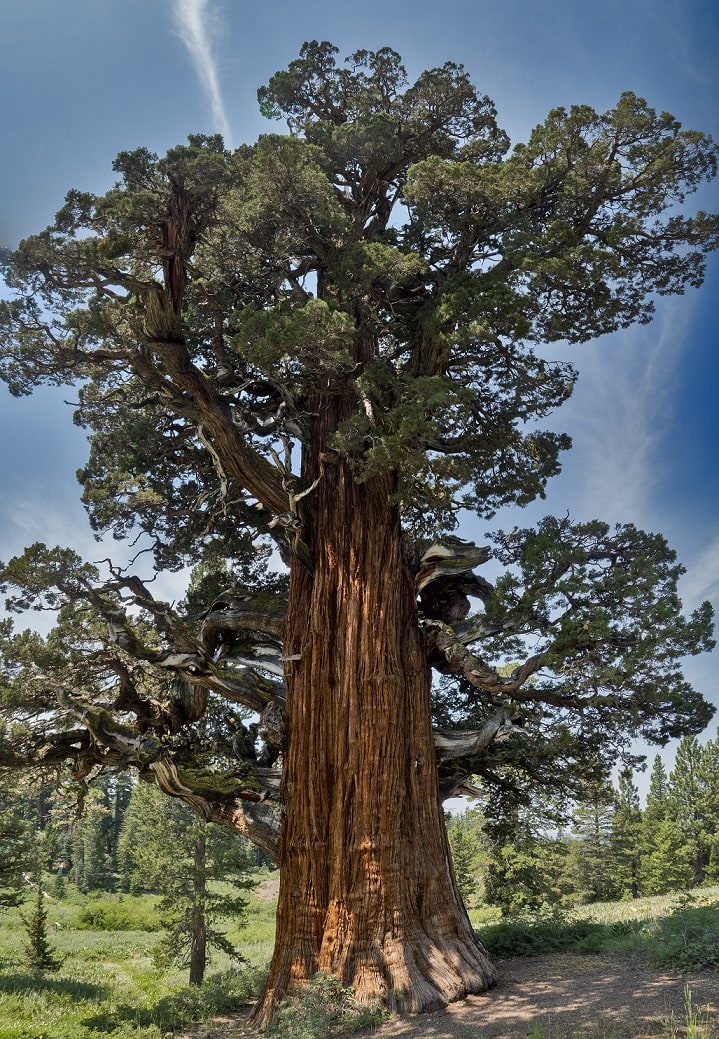 Like many of the other old trees on this list, the Bennett Juniper is not only old, but it is also impressively tall. The Bennett Juniper stands at over 86 feet (26.2 meters) and is the largest juniper in America. 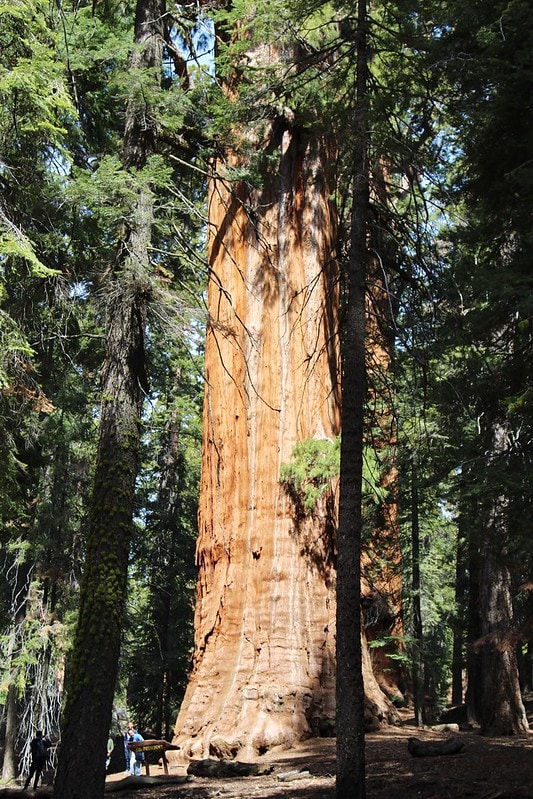 Despite its advanced age, The President is still growing rapidly and its yearly output of wood is greater than that of younger trees. 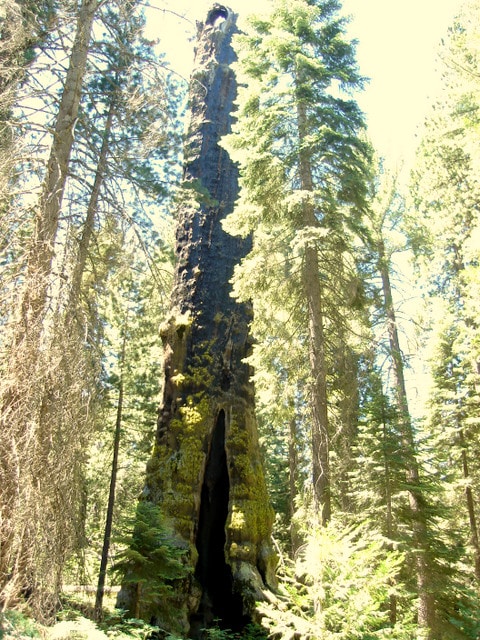 The Muir Snag, discovered by and named for famous environmentalist and naturalist John Muir, is the oldest Giant Sequoia or redwood tree ever found. The unfortunately dead tree is estimated to have been over 3,500 years old at the time of its death.

John Muir was able to determine the Muir Snag’s age by counting the tree’s rings visible through a giant fire scar. Muir initially counted 4,000 rings, but subsequent counts have lowered the trees age by a few hundred years. 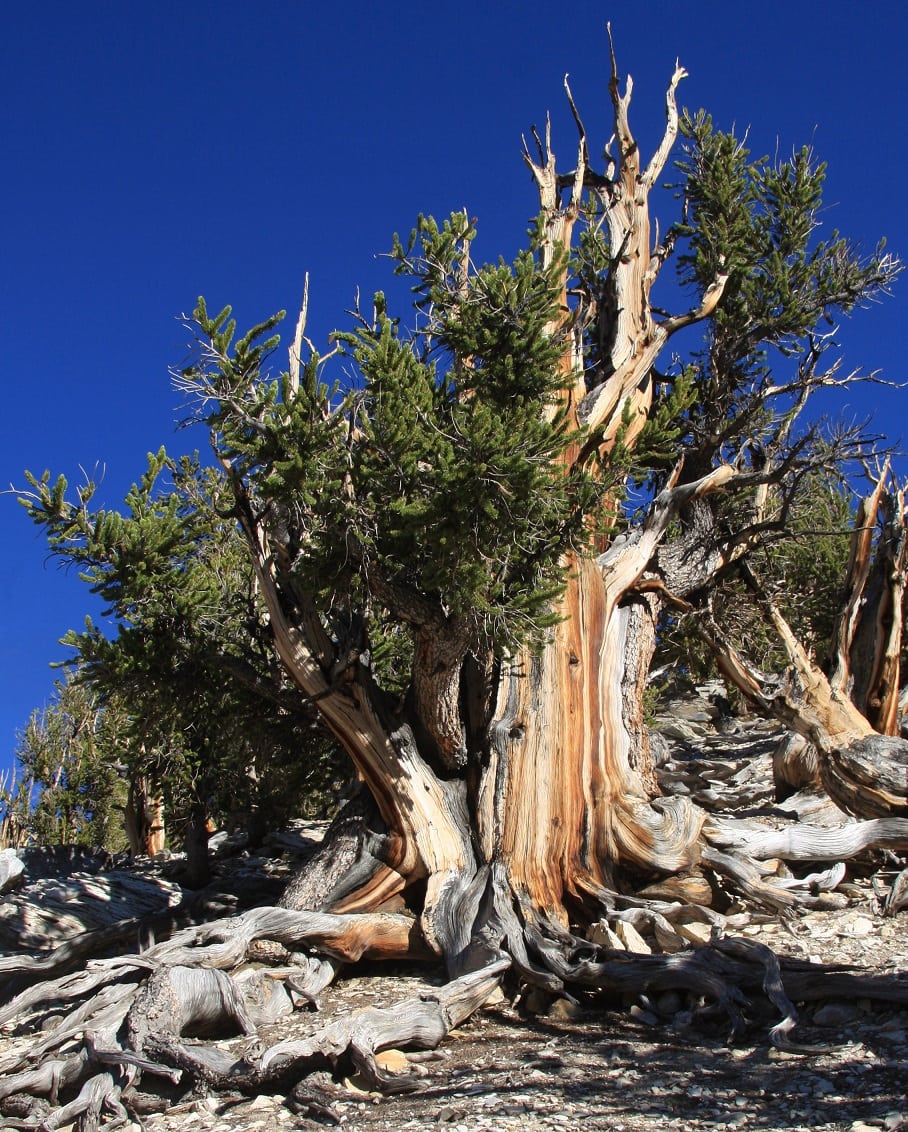 Since the Jurupa Oak is technically several cloned trees, Methuselah is often cited as the oldest individual tree (or non-clonal organism) in the world. Methuselah is a Great Basin bristlecone pine in California’s White Mountains that germinated sometime around 2833 BCE!

Methuselah’s current age is based on core samples taken in 1957 by by Edmund Schulman and Tom Harlan. The core samples showed that Methuselah was about 4,789 years old at the time and surprisingly the tree is still alive.

Numerous people have probably walked by or even taken a photograph of Methuselah without knowing since its exact location is a closely guarded secret. The tree is located somewhere in the Methuselah Grove of the Ancient Bristlecone Pine Forest. 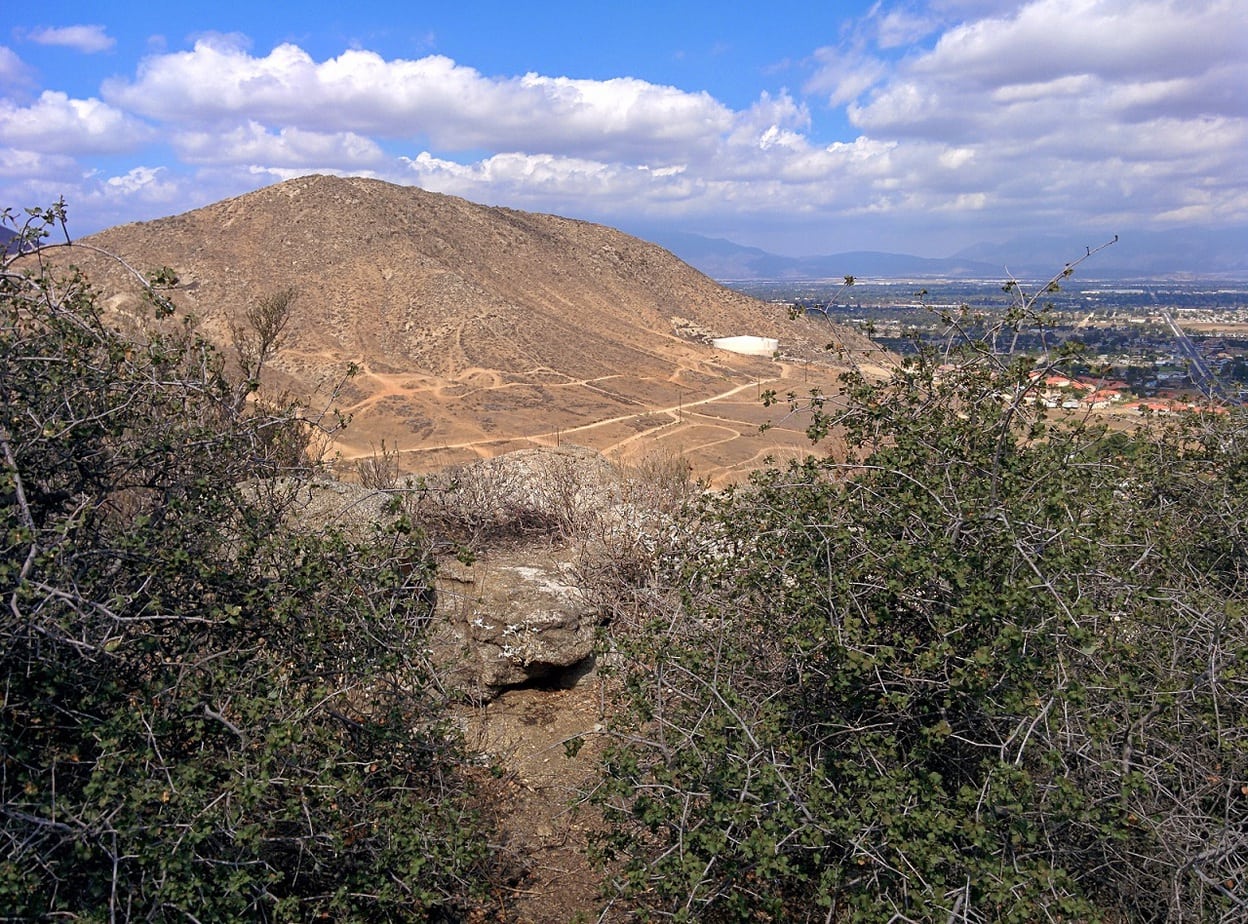 The Jurupa Oak, located in the Jurupa Mountains of California, is a colonal colony of Palmer’s oak estimated to be over 13,000 years old – this makes the Jurupa Oak the oldest tree in California. Palmer’s oak do not look like typical oaks and instead resemble small trees or shrubs. The Jurupa Oak has managed to survive so long by continuously cloning itself from time to time. Another unique thing about the Jurupa Oak is that it’s the only Palmer’s oak in the area as plant tends to grow in more temperate conditions.

The Jurupa Oak only reproduces (clones itself) after a fire. New shoots grow on the scorched branches.