The oldest cookbooks in the world predate modern food preparation, the usual concept of recipes, and even paper books in general. They are portals to the past. The cultures that made them may be lost, but in their cookbooks, we can easily find clues to their behavior, their history, and their literal tastes.

Here are the 8 oldest cookbooks in the world.

8. The Forme of Cury 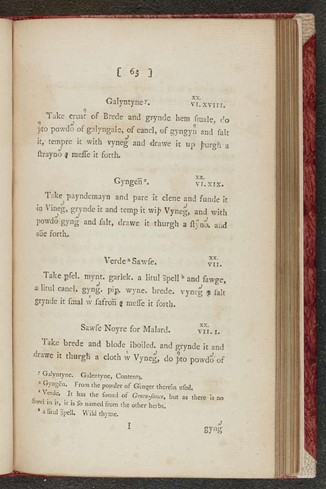 This Latin manuscript from 1390 A.D. represents medieval English recipes at their finest. The original text is gone. However, a copy spread out over nine manuscripts survived under the title given here, which translates to “The Method of Cooking.”

The translator Samuel Pegge could not pinpoint the exact authors of the text. However, the surviving manuscript begins as a scroll with a citation that reads, “the chief Master Cooks of King Richard II.” Based on that, The Forme of Cury is not accurately described as a single cookbook but a series of manuscripts with a famous family of recipes in common, passed down by scribes.

Old cookbooks can indirectly tell us more than just food preparation – they can be used to track people’s migrations and even the results of political and social change. For example, The Forme of Cury is one of the oldest English cookbooks that mentions olive oil and cloves. This gives us possible clues not only into recipes but trade and travel as well. 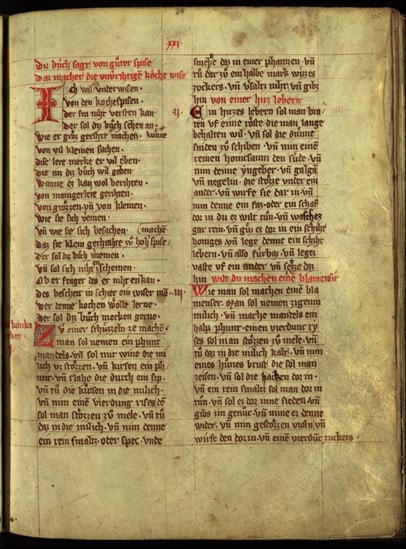 Daz buch von guter spise in English translates literally to “The book of good food.” It is a German text written around 1350, part of a house book published by a protonotary named Michael Jude. The collected work is called Michael de Leone’s house book (de Leone was his pen name). The cookbook portion is on pages 156-165.

Though only a few sheets and fragments of the first volume are still around, we have the table of contents to make logical assumptions about the rest. The book parallels several other 14th – 15th century cooking texts made in the same tradition, including those housed at the Austrian National Library (called Mondseer Kochbuch) and the Wiener Kochbuch. This was a book of 286 recipes written with the Daz buch von guter spise as one of its primary sources, so some of the recipes overlap.

The 101 recipes in the Daz buch von guter spise contain not only rhyming sections and closing remarks from the author but also several joke recipes. It begins with the promise that the following content “makes the ignorant cook wise.” 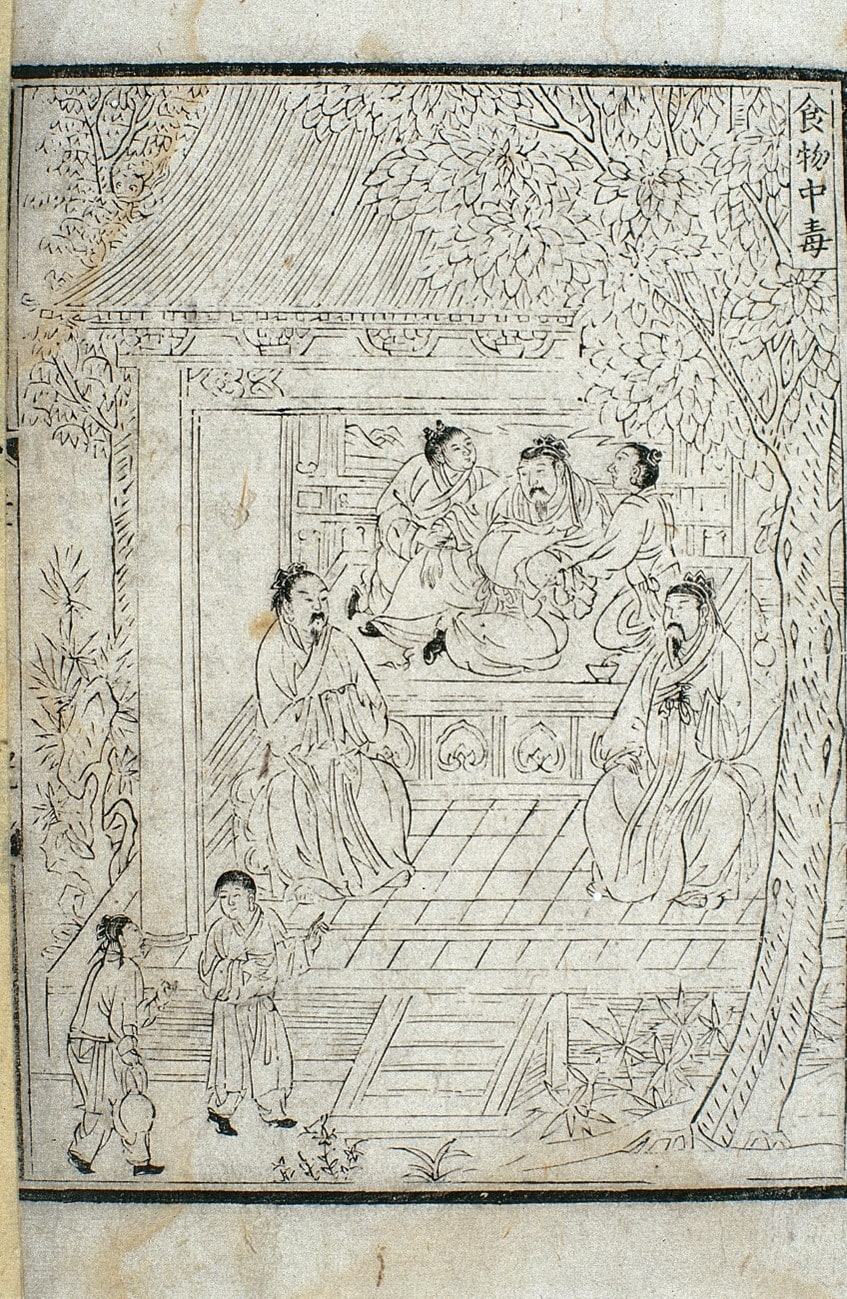 The Yinshan Zhengyao is a book of “Dietary Principles,” as the title translates, which threads the line between a work of culinary arts and a work of medicine. Historically, the book is significant as being the first to identify and describe deficiency diseases, such as those that result from being malnourished.

Though of unknown ethnicity, the author, Hu Sihui, is a well-known author possibly of Turkish-Chinese origin and a physician. He may even be considered a dietician, before such a thing existed. His vegetable soup recipe is well-known for its analgesic or pain-relieving properties.

The Aristotelian principle of “moderation” was one of Hu Sihui’s major tenets. He also combined his medical and culinary knowledge to create what may be the first standards of food hygiene, food storage, and even pregnancy diets. 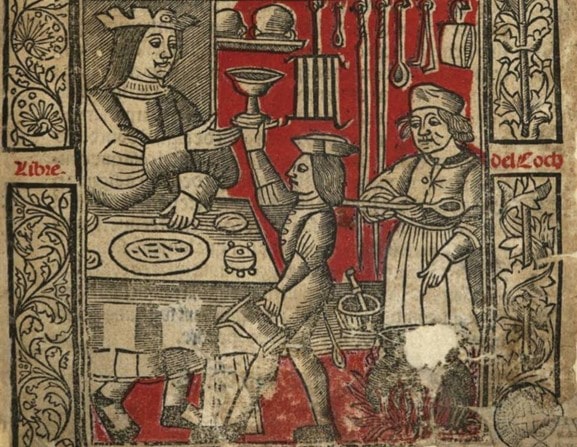 The Book of Sent Sovín was written in Valencian in the early 1300s by an unknown author. It’s full of medieval recipes, certainly some of the oldest in Europe, and gives us amazing insight into medieval culture. As cookbooks written in Latin (and its derivatives) go, this is as old as it gets!

The cookbook had a huge influence on other authors, being copied and resold in the 1400s many times as the now-famous collections, Libro di arte cotilas and Platina de honesta voluptate et valetudine. Combined, the recipes collected from the Book of Sent Sovín number more than 200.

The book’s actual title is Llibre de totes maneres de potatges de menjar, a name in its native Valencian language or Catalan, spoken in the Valencian Community in old Spain. 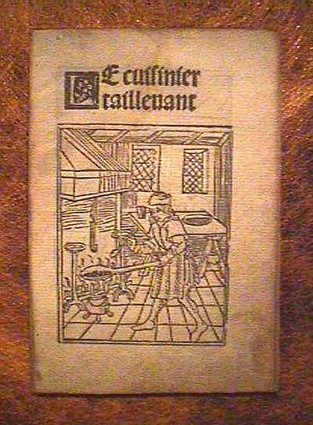 Le Viandier refers to any of four manuscripts, written as early as 1300 A.D., by the cook Guillaume Tirel. A cook in the court of France during the Hundred Years’ War, Tirel wrote under the name Taillevent, meaning “idle swaggerer.”

But here’s a conundrum. Guillaume Tirel was born in 1310. So how is he credited with a cookbook from 1300?

The answer is simple. Medieval texts such as this one were often copied, plagiarized, and rereleased under new names, presented as the work of the new author. For this reason, unfortunately for the unknown original author, the oldest version of the cookbook Le Viandier is one that was not written by its original author.

Le Viandier is one of the first examples of haute cuisine written down. This means that not only does the book demonstrate the ingredients of the food but the preparation and presentation as well. This may be due to Tirel’s experience in French noble courts and may not have been in the original text. 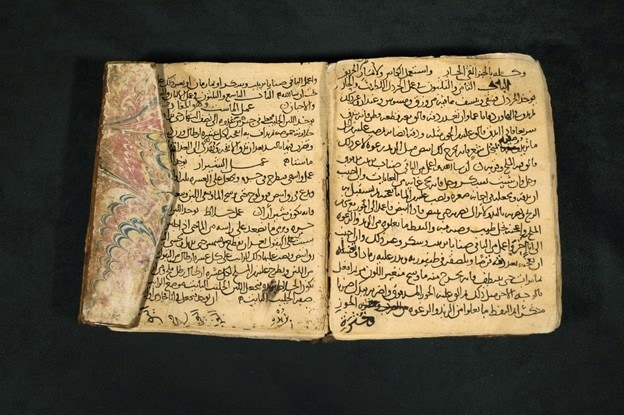 Abu Muhammad al-Muthaffar ibn Nasr ibn Sayyār al-Warrāq compiled recipes from the 8th and 9th centuries to create the Kitab al-Ṭabīḫ, the oldest known Arab cookbook. Historians believe that the text was written for a prince named Sayf al-Dawla with the goal of raising the bar for refinement and culture in his court.

Cuisine from diverse areas ranging from the Arabian Peninsula to Persia populates the book, including porridge sweetened with dates (called asida – a relatively simple dish) to the stews of the Nabataeans of Iraq.

It’s worth mentioning that another Arab cookbook by the same name was written in 1226, making it also one of the oldest in the world, though not worthy of a separate mention. It was written by al-Baghdadi and contained 160 recipes (later expanded to 420).

2. On the Subject of Cooking 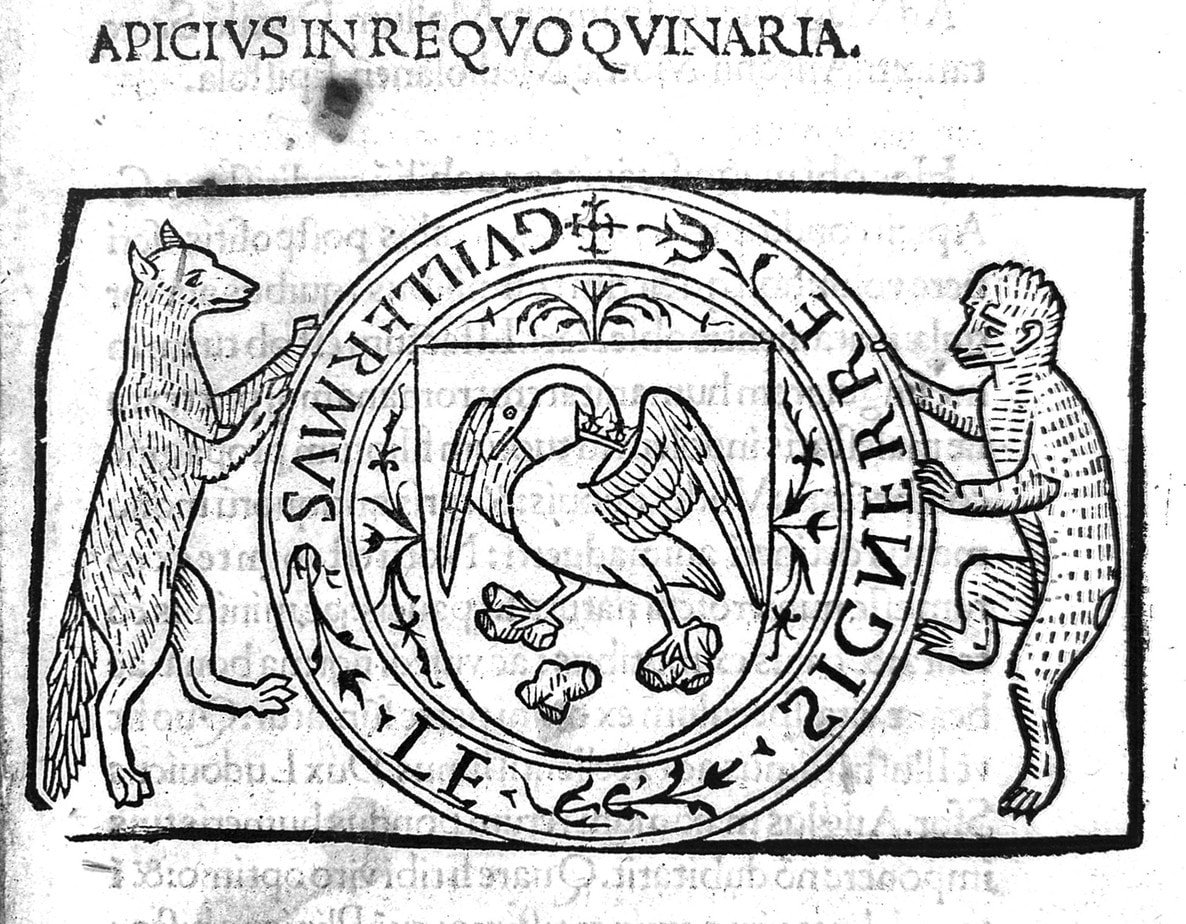 In the first millennium, Apicius wrote what is now considered to be the oldest surviving cookbook that is still a “book” with paper pages. De Re Coquinaria or On the Subject of Cooking contain almost 500 recipes of the Roman household. It’s actually 10 separate books combined and ordered based on the type of food, a format still used today to divide cookbooks into chapters (Meat, Fish, Soup, etc.).

The 9th century editions, the oldest in the world, are currently housed in the Vatican in Rome. One point of special note is that On the Subject of Cooking compiles what may be the first international cuisine, due to the Romans’ natural proclivity towards trying new things and integrating the customs of other cultures with their own.

Rome may be known for decadence, but the average Roman was actually very frugal. In fact, frugality or thriftiness was a high virtue for the average Roman citizen. As a result, Roman breakfasts and lunches were often simple preparations involving sliced fruit, breads and cheeses. Apicius’ text for which he has become known as the “patron saint of culinary” is focused on dinner, the meal where the Romans let loose and made food that was more elaborate. 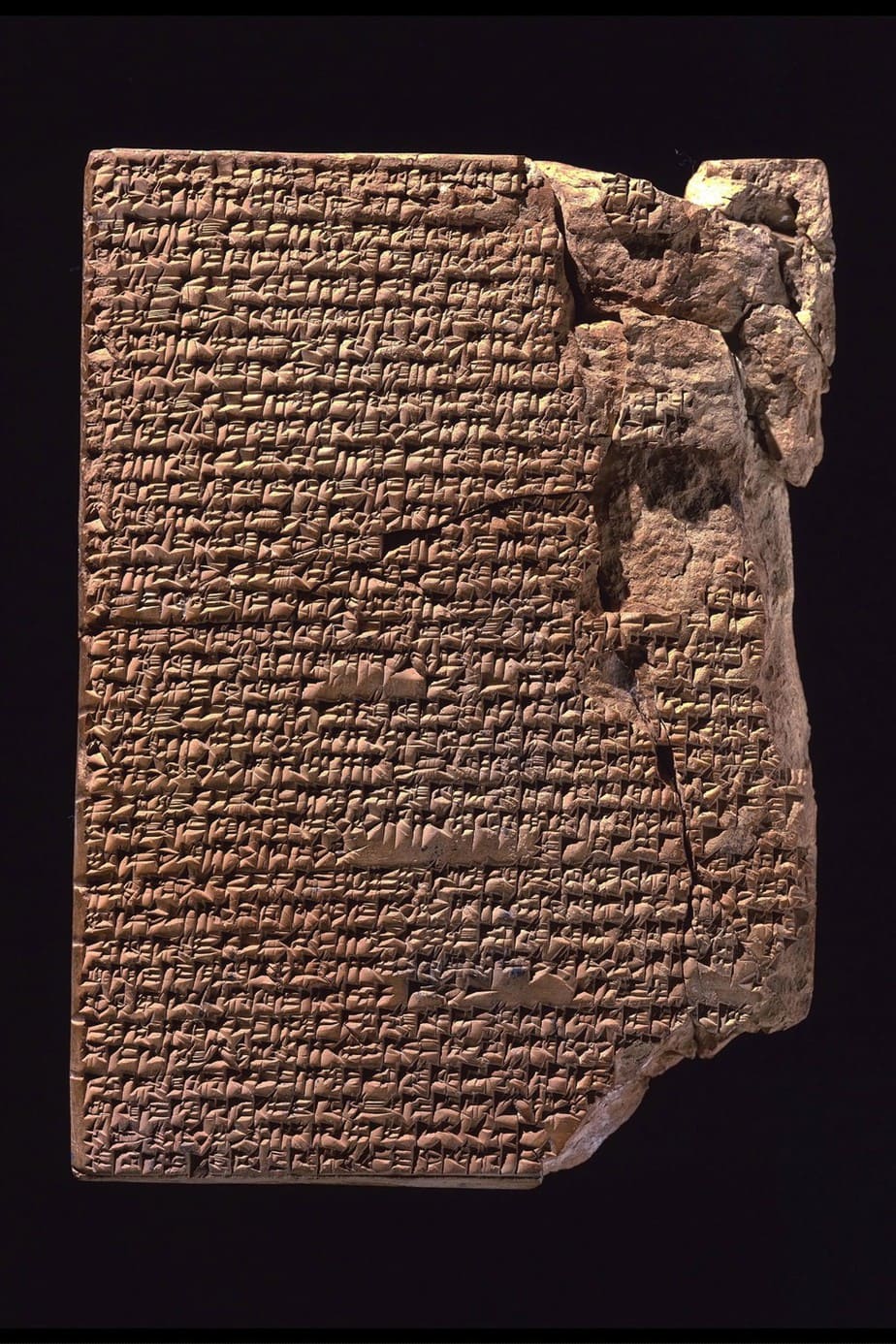 The oldest cookbook in the world is the Yale Culinary Tablets. These three stone slabs dating back to Mesopotamia circa 1700 B.C. represent the oldest known recipe-making in world history. They show in detail how these ancient people ate bread, soups, roasts, and even cake.

Of course, this was unlikely to be the diet of normal people. More likely, the Yale Culinary Tablets represent a list of preparations made for Mesopotamian royalty.

There was no such thing as serving and preparation standards in Mesopotamia, at least not by modern understanding. “Dinner” and “dessert” were not separated, and food seems to have been served continuously as it finished cooking. However, interestingly, the Yale Culinary Tablets do show an appreciation for food presentation, using complex molds and utensils to display the food creatively.

The oldest cookbooks may not be refined in many cases, but they present the culinary arts at their most basic and true – representations of the people and time in which they were written. From the most decadent French preparations to the hearty, sustainable foods of the Mesopotamians, these recipes provide researchers with fascinating, if indirect, ways of studying the past. And some of them are still delicious.

Posted by Lauren Johnson 0
Spread the loveHumans have been eating grains for as long as anyone can remember, but the first true cereals, didn’t…

Posted by Lauren Johnson 0
Spread the loveThe history of sourdough is an ancient one. For all we know, we have yet to discover the… 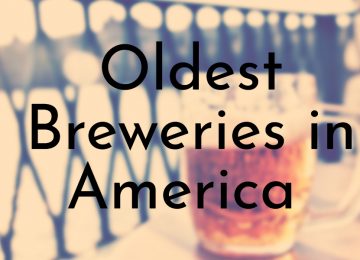