Although New Orleans is known for Mardi Gras, it is also one of the greatest food cities in the United States. Countless tourists visit New Orleans just to try its unique dishes, which are a blend of French, Cajun, and Creole cuisines. Nearly all of the oldest restaurants in the New Orleans were started by French and other European immigrants. All of these restaurants are still in operation and continue to serve the same foods that they did when they were first opened. 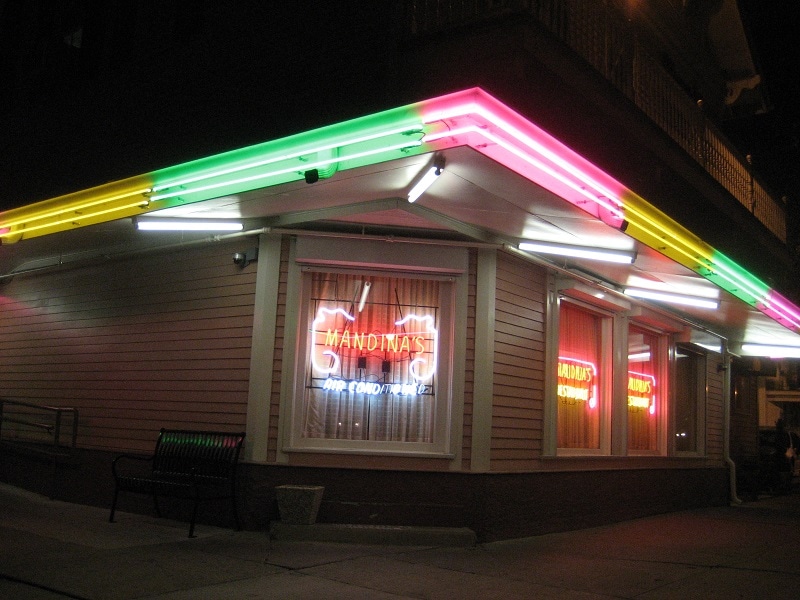 Mandina’s Restaurant started out as a grocery store built in 1898 by Italian immigrant Sebastian Mandina. The grocery store became a favorite of the other Italian immigrants in the area and it eventually became a pool hall that served sandwiches. Mandina’s sons, Anthony and Frank, turned the pool hall into a restaurant in 1932. The Mandina family still operates Mandina’s Restaurant today.

Prior to Hurricane Katrina in 2005, Mid-City was positioned as an up and coming neighborhood and Mandina’s success was rising. Unfortunately, Mandina’s was severely damaged by the hurricane and there were concerns that the restaurant would not reopen. 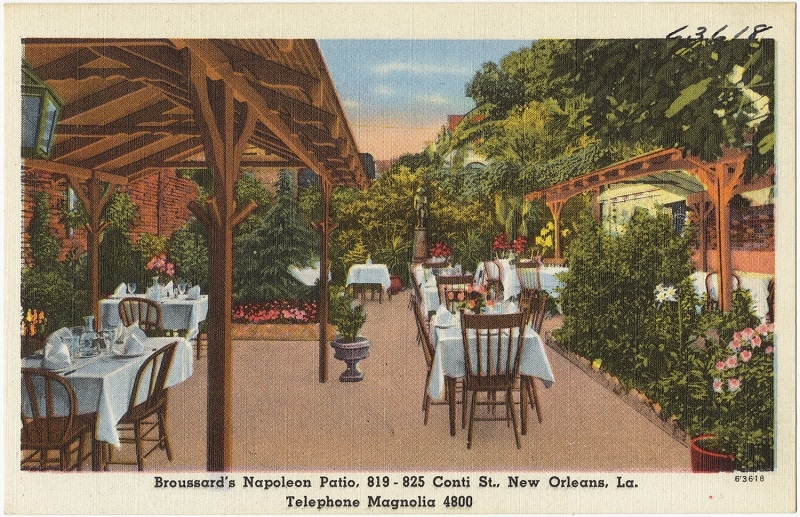 Broussard’s was started in 1920 after chef Joseph Broussard married Rosalie Bornello, of the prominent Bornello family. They moved into the Bornello mansion and Broussard opened a restaurant to serve Creole cuisine and dishes inspired by his Parisian training. Broussard’s is so famous that it has hosted Hollywood celebrities, politicians, and literary figures such as Tennessee Williams and William Faulkner.

The Broussard family maintained the restaurant until Joseph and Rosalie both died, one month apart, in 1966. Joseph Segretto took over Broussard’s and renovated the building in the 1970s. The current owners, the Ammari Family, are dedicated to maintaining Broussard’s heritage and have also carefully renovated the property as it approaches its 100th anniversary. 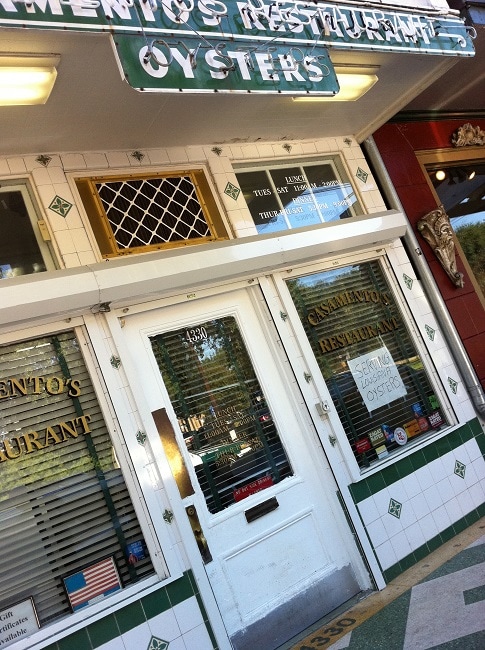 Casamento’s Restaurant, which is known for its seafood (especially oysters), was established in 1919 by Joe Casamento, an Italian immigrant. Casamento wanted his new restaurant to have tiled surfaces, inside and out, just like the traditional buildings of his native homeland. He needed so many tiles, that it took four different tile companies to fill the order

While Casamento’s serves a variety of fresh seafood dishes, its oysters loaves are the most popular and famous menu item. The restaurant uses a proprietary “pan bread” rather than the french bread that most New Orleans seafood restaurants use. Today, the restaurant is still run by members of the Casamento family. 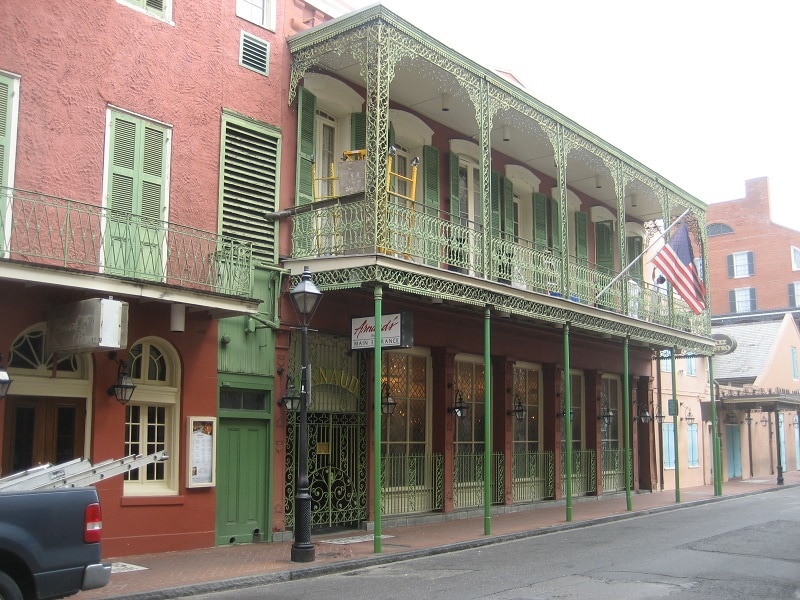 Arnaud’s Restaurant was opened in 1918 by a French wine salesman named Arnaud Cazenave, who wanted his restaurant to specialize in serving quality Creole cuisine. Cazenave’s focus on serving high quality food paid off and Arnaud’s became a very profitable restaurant.

The Cazenave family continued to run Arnaud’s until it was sold in 1978 to Archie and Jane Casbarian, whose descendants still operate the restaurant today. Archie Casbarian had loved Arnaud’s and was dedicated to restoring the restaurant to its former glory — most of the restaurant had fallen into disrepair and many of its dining rooms were shut down. Casbarian kept as much of the original interior as possible and has turned Arnaud’s back into a popular New Orleans restaurant. 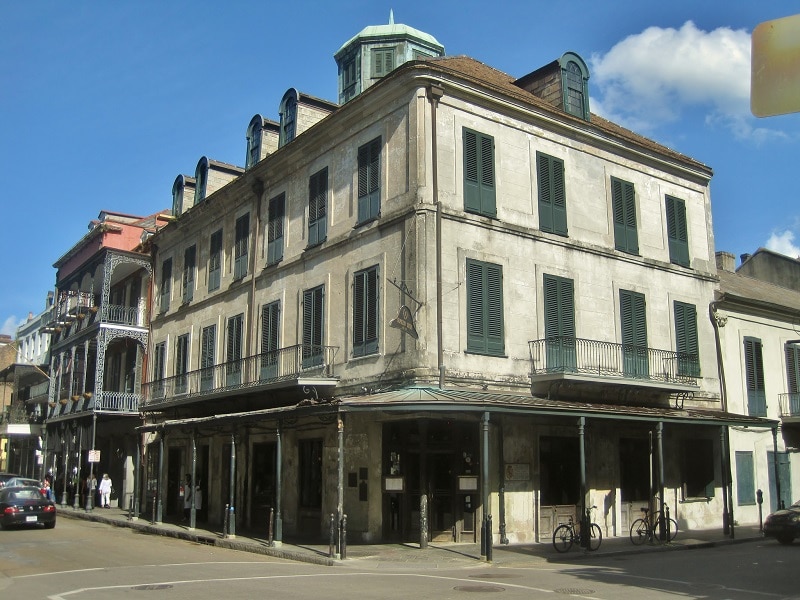 While Napoleon House is a famous New Orleans restaurant and historical landmark today, it started out as a lavish private residence built in the French Quarter in the late 18th century. The building’s first occupant was Nicholas Girod, mayor of New Orleans from 1812 – 1815.

The restaurant is named after Napoleon Bonaparte, who was supposed to take refuge at Girod’s house following his exile — the building is also called the Nicholaus Girod House.

The Impastato family turned Napoleon House into a restaurant in 1914 and it has been in continuous operation since then. In 2015, the Impastatos sold Napoleon House to Ralph Brennan, whose relatives own the famous Commander’s Palace. Napleon House serves traditional New Orleans cuisine and drinks including the Pimm’s Cup and the muffuleta sandwich. 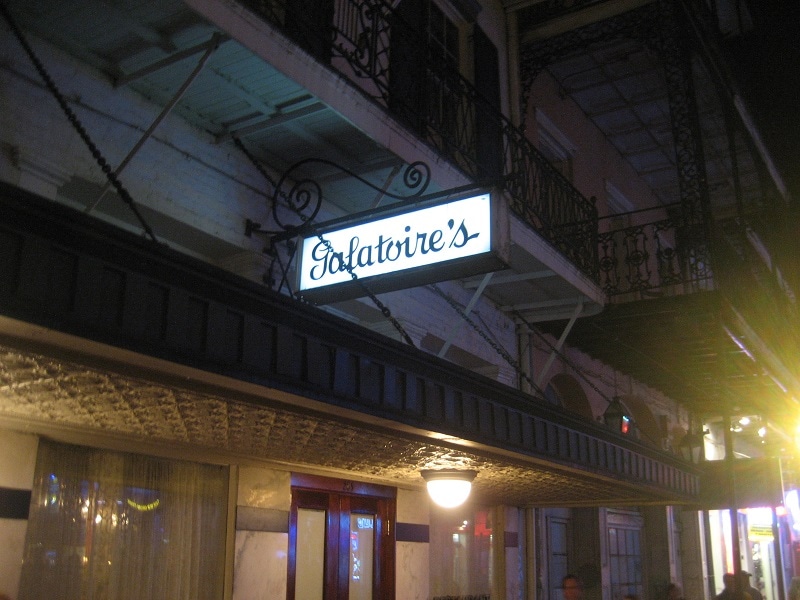 Galatoire’s specializing in serving French Creole cuisine and some of its specialty dishes include Trout Marguery, Crabmeat Ravigote, and Oysters en Brochette. The restaurant has also been frequented by celebrities such as Tennessee Williams, Harpo Marx, Mick Jagger, and a few U.S. presidents. 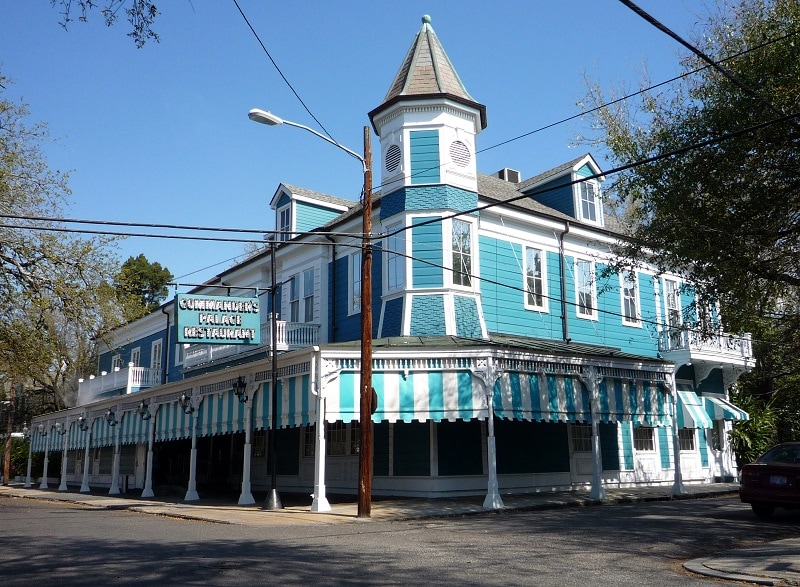 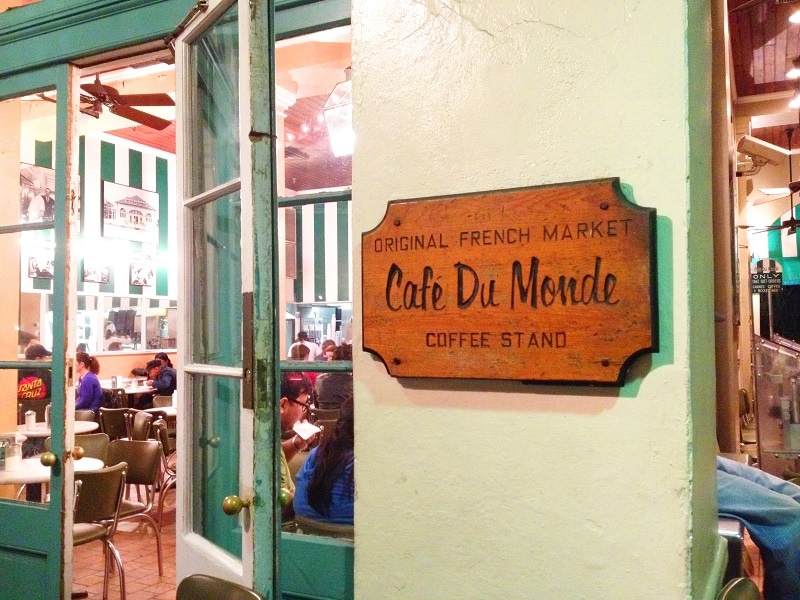 While Café Du Monde has several locations around Louisiana today, the original restaurant in New Orleans started as a coffee stand in 1862. The building that houses Café Du Monde was built in 1813 and is the same spot as the very first French Market building. Before becoming Café Du Monde, the building was known as The Butcher’s Hall.

Café Du Monde has been owned and operated by the Fernandez family since 1942, when their patriarch Hubert Fernandez purchased the coffee stand from Fred Koeniger. Today, Café Du Monde is known around the world for its beignets, French -style doughnuts covered in powdered sugar, and its dark roasted coffee and chicory. The original Café Du Monde is a must-visit tourist destination. 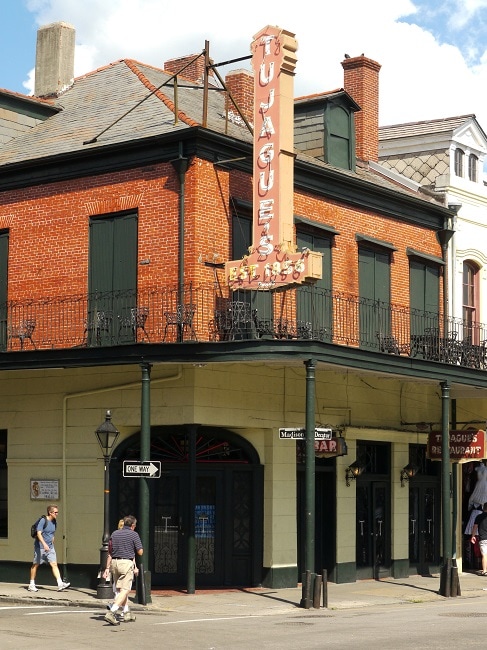 Tujague’s Restaurant proudly calls itself New Orleans’ second oldest restaurant. The restaurant opened its doors in 1856 when French immigrant Guillaume Tujague decided to start selling his own food after  working as a butcher in the French Quarter for three years. Guillaume and his wife Marie Abadie Tujague started out selling breakfast and lunch to the dock workers, market laborers and seamen who crowded that part of New Orleans’ riverfront.

According to local tradition, Tujague’s became popular because of two dishes, the boiled brisket with vegetables and shrimp remoulade. Prior to his death in 1912, Guillaume sold Tujague’s to Phlibert Guichet. The Guichet family continued to own and operate Tujague’s until 1982, when the restaurant was sold to Steven Latter. After researching Tujague’s history, Latter completely restored the restaurant and covered the walls with memorabilia honoring Tujague’s past. 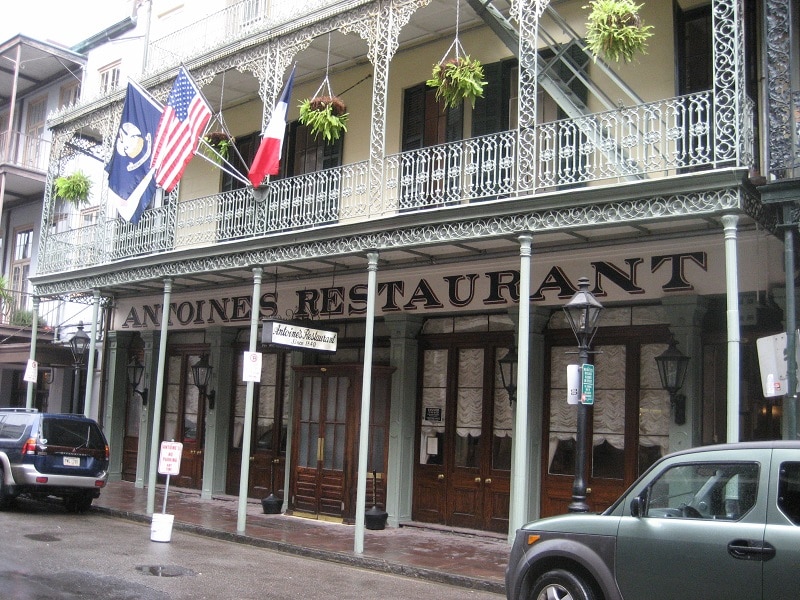 Antoine’s Restaurant, which was founded in 1840 by French immigrant Antoine Alciatore, is the oldest restaurant in New Orleans. Alciatore originally opened the restaurant in a small building a block away from the building’s current location. Antoine’s started out as a boarding house and restaurant, but focused shifted to serving food after Alciatore’s married his fiance.

Eventually, Antoine’s became so popular that Alciatore had to move to a bigger spot in 1868, where the restaurant remains today. Alciatore died in 1875 and left the restaurant in his wife’s hand, who then passed Antoine’s down to their son Jules — he is credited with creating Oysters Rockefeller.

Descendants of Antoine Alciatore are still operating the restaurant today and have helped to cement Antoine’s Restaurant as a New Orleans landmark.