While other countries and civilizations have had “fast food” (foods that can be eaten on the go) for centuries, the concept of fast food as we know it today originated in the United States in the early 20th century. These early pioneers of the fast food industry were some of the first to demand consistency across all of their locations to ensure that their customers had the same experience at every restaurant with their name. Many of these fast food chains invented industry staples, such as the two-way intercom ordering system.

All of these fast food chains are still around today and have grown into global powerhouses. 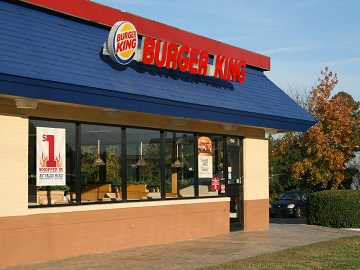 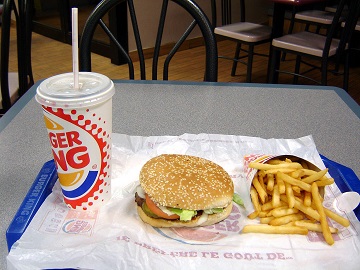 Insta-Burger King grew rapidly within two years, but began facing financial troubles despite the success. As the company continued to struggle, Miami-based franchisees David Edgerton and James McLamore purchased the company and renamed it Burger King in 1959.

Today, Burger King is one of the largest fast food burger chains in the world and has over 15,000 locations around the world. 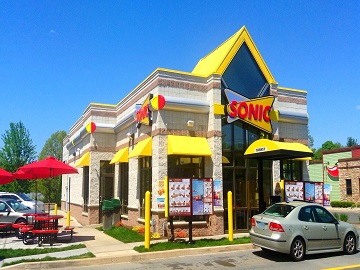 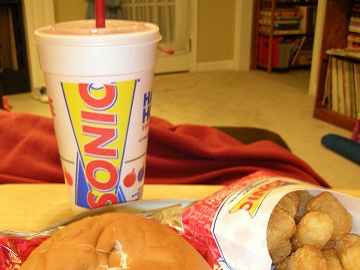 Sonic was founded in 1953 as Troy Smith was trying to return to his life in Seminole, Oklahoma after serving in the U.S. Army during World War II. Smith spent some time working as a milk and bread deliveryman before purchasing a small diner.

Not long after, Smith sold the diner so he could start a fast food restaurant called Troy’s Pan Full of Chicken. In 1953, Smith once again shifted gears and took over a walk up root beer stand called the Top Hat, the original name of Sonic.

Initially, customers had to walk up to the Top Hat stand to place their orders, but Smith installed drive-in speakers after seeing them in Louisiana. Smith then hired carhops to deliver the food, thus creating the Sonic of today.

In 1956, Smith began franchising the Top Hat after he met Charles Woodrow Pappe, an entrepreneur, who was impressed with Smith’s drive-in restaurant. After learning that Top Hat was already trademarked, Smith and Pappe changed the chain’s name to Sonic in 1959.

Instead of having a traditional franchise fee, Troy Smith and Charles Pappe charged two cents per hamburger, which amounted to a penny profit per bag stamped with Sonic’s logo. 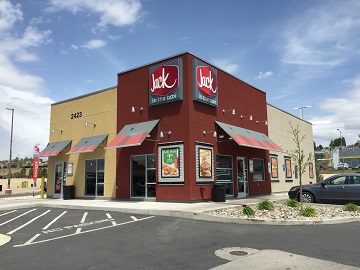 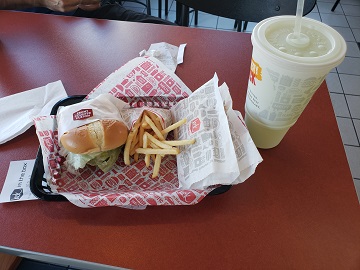 Jack in the Box was founded in 1951 by Robert O. Peterson in San Diego. Peterson already owned a small chain of restaurants called Topsy’s Drive-In. By the end of the 1940s, Peterson’s restaurants had a circus décor, which he carried over when he opened the first Jack in the Box.

Today, Jack in the Box is owned by Apollo Global Management and has come to be known for its quirky mascot and wide variety of items meant to satisfy any craving.

Although Jack had always been a staple of Jack in the Box (as the clown on the top of store’s roof and atop the drive-thru intercom), he made his debut as we known him today — the company’s fictional founder, CEO, and ad pitchman — in 1995. 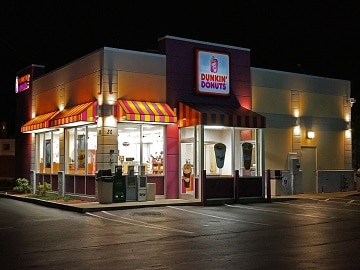 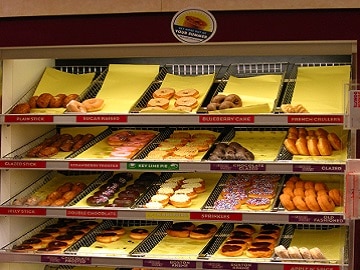 Dunkin’ Donuts dates back to 1948 when William Rosenberg opened a donut and coffee restaurant in Qunicy, Massachusetts called Open Kettle. Two years later, after brainstorming with company executives, Rosenberg decided to rename the restaurant Dunkin’ Donuts. It is the oldest fast food donut chain in the world.

Rosenberg’s goal was to “make and serve the freshest, most delicious coffee and donuts quickly and courteously in modern, well merchandised stores.” Dunkin’ Donuts was an immediate success and in 1955, Rosenberg began opening franchised locations. Within 10 years, Dunkin’ Donuts grew to 100 locations and has not slowed down since.

Over time, Dunkin’ Donuts began selling other food, such as breakfast sandwiches. To reflect its expanded menu, Dunkin’ Donuts is currently rebranding itself as just Dunkin’.

Today, there are over 12,400 Dunkin’ Donuts restaurants across 46 countries. 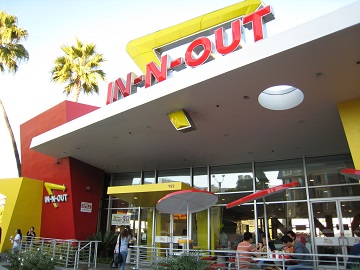 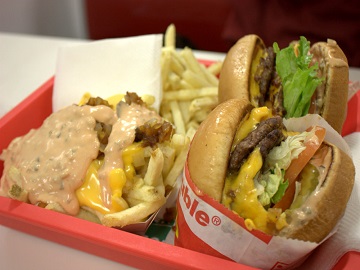 Of all the fast food chains on this list, none have a bigger cult following than In-N-Out Burger. The chain’s popularity is due to its regional availability — In-N-Out does not franchise and never opens locations outside of the Western half of the United States (California, Arizona, Nevada, Utah, Texas, and Oregon).

The West Coast chain also touts family values and serves simple yet high quality food that is beloved by nearly everyone that’s tried it.

In-N-Out was founded in 1948 by Harry and Esther Snyder in Baldwin Park, California. The Snyders established In-N-Out as a drive-thru hamburger stand, which was the first of its kind in California. For much of its history, In-N-Out has been family owned.

For a few years, following the death of Esther Snyder in 2006, In-N-Out had its first non-family member as the company’s president. However, In-N-Out is once again controlled by a Snyder, Lynsi Martinez, Ester and Harry’s granddaughter.

In-N-Out’s packaging features Bible citations, such as John 3:16, as a reflection of the Snyder family’s Christian beliefs. This was started by Rich Snyder, Harry and Esther’s son, in the 1980s when he took over the company. 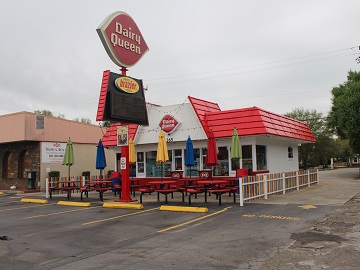 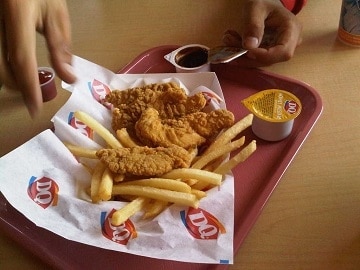 Dairy Queen is probably better known for its frozen treats, especially its signature Blizzard, but the chain also sells hot foods, including chicken strips, fries, and burgers. However, Dairy Queen did originally only sell soft-serve ice cream, which was invented in 1938 by Dairy Queen’s founder, John Fremont McCullough and his son Alex.

Initially, McCullough sold his product from his friend’s, Sherb Noble, ice cream shop. In 1940 the McCulloughs and Noble opened the first Dairy Queen in Joliet, Illinois. Throughout the 1950s, Dairy Queen introduced many of its iconic menu items, including the Dilly Bar. Today, Dairy Queen has thousands of locations around the world.

The little curl on the top of Dairy Queen’s soft-serve ice cream cones is trademarked by the company. 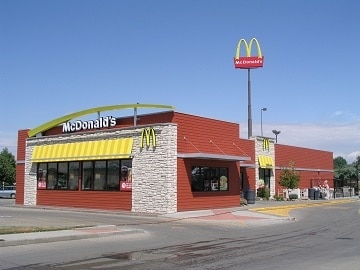 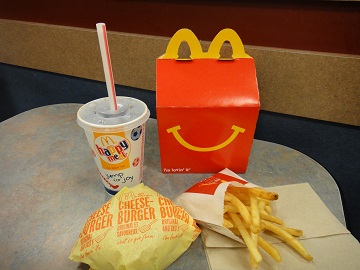 While McDonald’s official stance is that Ray Kroc invented the company in 1955 by himself, this couldn’t be further from the truth and erases the real founders and the chain’s namesakes, Richard and Maurice McDonald.

The McDonald brothers opened their first drive-in restaurant in 1940 in San Bernadino, California.

Although McDonald’s is famous for its burgers today, the brothers actually originally sold slow-cooked barbecue sandwiches. Eventually, they started selling burgers and in 1947 they realized that most of their profits came from their hamburgers.

The McDonalds ended up closing their drive-in restaurant to open a new restaurant with a streamlined system that only hamburgers, cheeseburgers, potato chips, coffee, soft drinks, and apple pie. The chips and pies were swapped out for french fries and milkshakes the following year. Their concept was a success and by the early 1950s, there were several McDonald’s restaurants in southern California.

Ray Kroc became a McDonald’s franchisee in 1955 and eventually pushed the McDonald brothers out of the company and the restaurant industry completely. So, while Kroc may not have been McDonald’s real founder, he is responsible for turning it into the global powerhouse it is today.

McDonald’s iconic Golden Arches were designed by architect Stanley Clark Meston and his assistant Charles Fish and the first McDonald’s location featuring the new logo opened in 1953 in Phoenix, Arizona. 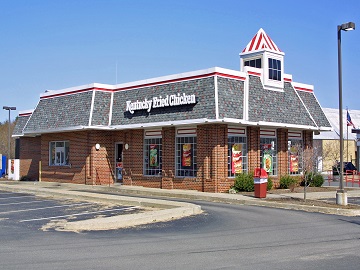 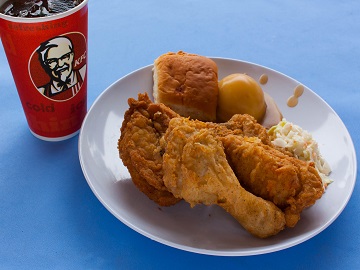 KFC is the world’s first fast food chicken chain restaurant and began in 1930 when Harland Sanders began selling food to hungry travelers out of the gas station that he owned at the time. As business increased, Sanders decided to purchase the gas station across the street because it had more visibility.

With the second station converted into a restaurant, Sanders started selling fried chicken and the rest is history.

Since fried chicken took too long to cook, Sanders began looking for a way to prepare the chicken faster. In 1939, the first commercial pressure cookers were released to the market and Sanders bought one and converted it into a pressure fryer.

Sanders revolutionized the cooking method for fried chicken and he was able to produce larger quantities of chicken that were cooked through, remained juicy, and were crisp on the outside. The following year, Sanders perfected his famous Original Recipe of 11 herbs and spices.

Today, KFC is the second largest fast food chain in the world (by sales) after McDonald’s.

Colonel Sanders is not technically a real military colonel, but in 1939 Governor Rudy Laffoon made him an honorary Kentucky Colonel for his contributions to the state’s cuisine. 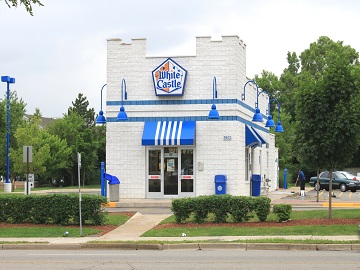 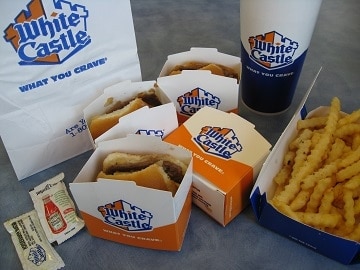 Since A&W started out as a root beer stand, many people consider White Castle to be the world’s first true fast food restaurant. White Castle was founded in 1921 by Billy Ingram and Walter Anderson in Wichita, Kansas. From the start White Castle sold burgers, so it is definitely the oldest fast food burger chain in the world.

Although Anderson already had experience operating burger stands, when he and Ingram decided to start White Castle, Americans weren’t obsessed with hamburgers like they are today. In fact, many people saw burgers as unsafe and undesirable. To help change public perception, Anderson and Ingram made sure their first White Castle restaurant was clean and spotless. They also made sure their employees were well-groomed.

Another innovative touch that Anderson and Ingram added was to grind the beef in full view of customers. All of their ideas worked and White Castle began expanding in the area within a few years.

White Castle remains relatively small compared to some of the other chains on this list because it has never franchised and all locations remain company-owned. 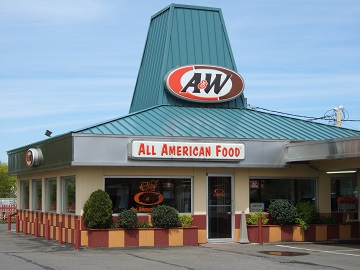 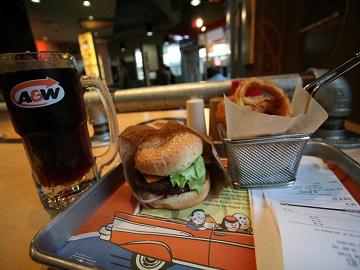 A&W traces its roots to June 20, 1919 when Roy W. Allen opened a root beer stand in Lodi, California. Allen had purchased his root beer recipe from a pharmacist and decided to start selling the drink on a hot summer day that happened to coincide with a city-wide party celebrating the homecoming of local World War I heroes.

Allen’s root beer was a hit and two years later, he partnered with former employee Frank Wright to open additional root beer stands in the area. Around this time, Allen and Wright coined the name A&W, which uses the first letter of both of their last names.

As their success continued, Allen and Wright decided to sell A&W franchises in 1925. This makes A&W the oldest fast-food chain in the world.

Over time A&W expanded its menu and added food such as burgers, hot dogs, cheese curds, and other typical fast food fare.

A&W opened its first international location in Canada in Winnipeg, Manitoba in 1956. The restaurant chain now has locations around the world.