Although modern society is moving away from using physical currency, coinage has been used by people for thousands of years. The first coins were developed around the 7th century in Iron Age Anatolia (specifically Lydia), China, India, and Ancient Greece.

Several examples of these early coins have survived and belong to private collectors or various museums around the world. They were often made of silver, gold, or other precious metals and were stamped with a distinctive design such as a lion’s head or sea turtle. The use of coinage as currency spread as these early cultures traded with one another. 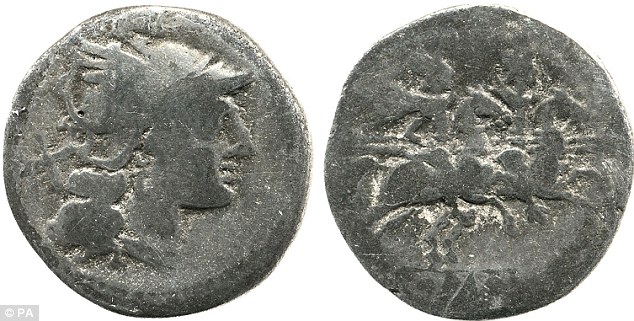 In 2000, Ken Wallace, a volunteer from the Hallaton Fieldwork Group, discovered about 130 silver coins. After this initial discovery, a group of local archaeologists excavated what is now known as the Hallaton Treasure, the largest hoard of British Iron Age coins ever discovered. The team uncovered over 5,000 silver and gold coins, jewelry, a silver-gilt Roman parade helmet, and other artifacts.

Among the hoard, was a silver Roman coin dating back to about 211 BCE – it is the oldest Roman coin ever found in Britain. One side of the coin is stamped with the Goddess Roma and the other side depicts mythical twins Castor and Pollux riding a horse. Some archaeologists say that the coin is evidence that Britain traded with Rome prior to the Roman conquest in 43 CE. 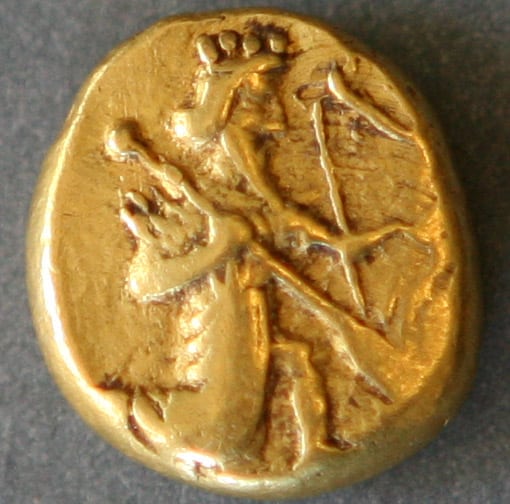 Daric were very high quality and had a gold purity of about 95.83%. After Alexander the Great successfully invaded Persia in 330 BCE, the coins were melted down and remade into coins of Alexander. This is most likely the reason why daric are extremely rare despite being widely used. 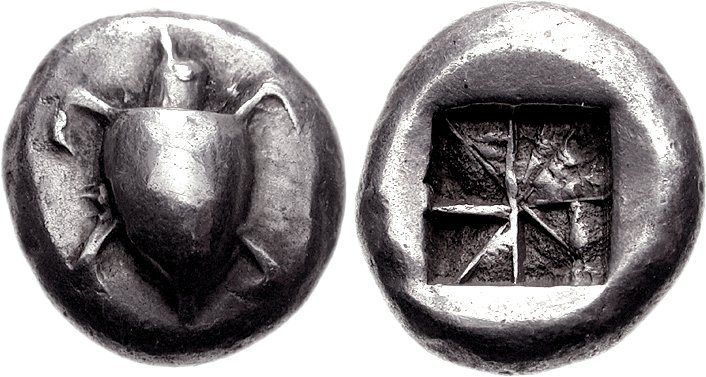 The people of ancient Aegina traveled extensively and traded with Ionia and Lydia. They saw the emergence of the first coins and realized that they could be used to store wealth and optimize trade through a global currency. Around the mid-6th century BCE, Aegina became the first Greek city-state to issue coinage.

The Aegina coins were the first coins used as international trade currency and were easily recognizable by their consistent designs. Their coins were heavier and thicker and often featured a sea turtle engraved in high relief on one side and a punched square pattern on the back. Eventually, the Aegina coins spread throughout the known world at the time.

While historians are divided over the origins coinage in India, it is commonly believed that the first coins in India were minted around the 6th century BCE. These early coins were created by the Mahajanapadas of the Indo-Gangetic Plain, who learned the practice from West Asia. The coins were punch-marked and called Karshpanas, Puranas, or Pana.

Unlike the coins of West Asia, early Indian coinage was not circular. They were stamped bars of metal with varied designs. Some coins featured a single symbol, while others were punched several times (often five). To create the coins, silver plates were cut into appropriate sizes and typically had at least one of its corners cut off. 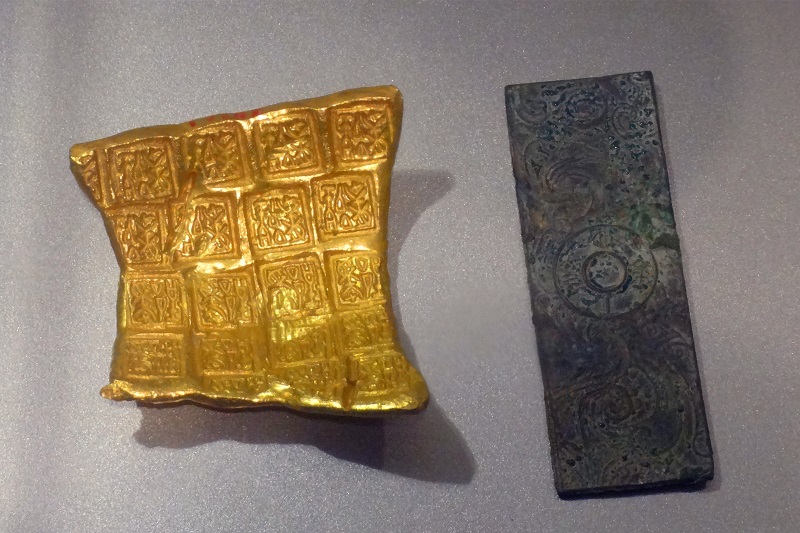 Ancient Chinese coinage was created around the same time as the first Western coins. It is believed that Chinese coinage probably developed independently from Western-style coinage, which influenced nearly all of the world’s early coins. The Chinese may have started using coinage as early as 700 BCE through the exchange of cowrie shells.

The first gold coins of this time period were issued by the State of Chu during the Warring States period. These coins are called Ying Yuan and the earliest examples date back to around 600 or 500 BCE. They were made out of rough squares of gold, stamped with inscriptions indicating the coins monetary unit or weight, which is read as yuan. 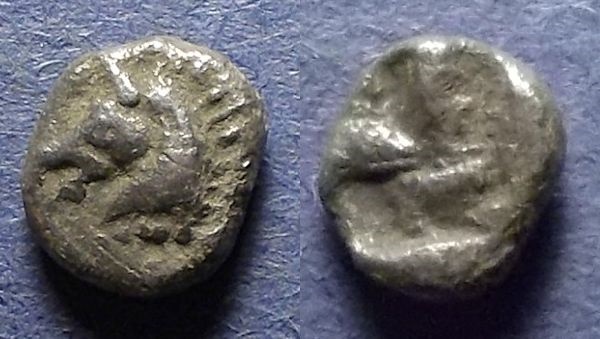 Cyme was city in ancient Ionia (modern-day central coast of Turkey), which was geographically near Lydia (the birthplace of coins). The two cities were also politically close and Cyme was inspired to start making their own coinage for their citizens by the Lydian’s “nobleman’s tax tokens”.

The first coins from Cyme were called Hemiobols and were stamped with a horse’s head and made from a fraction of silver. These coins are believed to be the second oldest in the world and were first circulated around 600 – 500 BCE. The Ionian Greeks were the first to use coinage (the Hemiobols) for large-scale retailing and eventually spread the idea of Market Economics to the rest of the world. 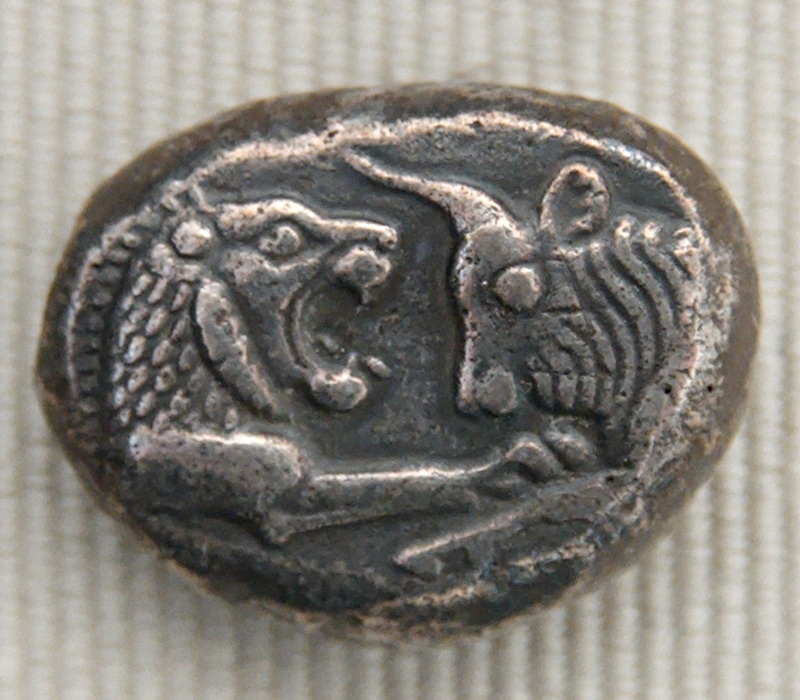 The Lydian Lion is widely considered the oldest coin in the world. These coins predate ancient Greek coinage and were created in the ancient Kingdom of Lydia, which was located in modern-day western Turkey. While the dates of these coins are debated – with some dates going as far back as 700 BCE – it is most commonly believed that they emerged under the reign of King Alyattes, who ruled Lydia c. 610 – 550 BCE.

To back up the claim that coinage was invented by the Lydians, people often cite writings from Herodotus, a Greek historian. He said the Lydians were the first people to use silver and gold coins and the first to establish retail shops in permanent locations. 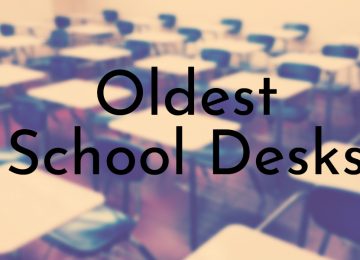 Posted by Lauren Johnson 0
Spread the loveThe school desk is an object almost everyone has faced throughout their childhoods and adolescence. As we grow…

Posted by Victor Eaton 0
Spread the loveAround the early 1800s, a few colleges and universities began admitting women to study and earn degrees. As…