Most of us grew up with nursery rhymes; for many of us, they were among the first things we learned to read. Their enduring appeal is hardly surprising: the rhymes and meters make them easy to remember, and the fanciful imagery has lent itself to creative illustration by generations of artists.

Prior to the 18th century, books for children were primarily educational, and few people thought to write down the rhymes and songs that they enjoyed. Many nursery rhymes that were first printed in the mid-1700s are actually much older, and their origins can often be traced to more adult fare such as drinking songs and political satire.

But just because many of the most famous nursery rhymes weren’t created for children doesn’t mean that children haven’t enjoyed them, in some cases, for centuries. Following is a list of some of the oldest recorded nursery rhymes in the English language.

10. Ring around the Rosie 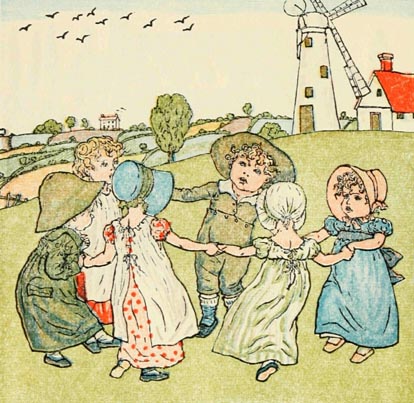 For at least two centuries, children in Europe and the United States have joined hands and turned in a circle while chanting this little song.

It is often said to have dark origins as a rhyme about the Black Death, with “posies” being the herbs that were said to prevent the illness, “ashes” the remains of the dead, and “we all fall down” as death itself. As colorful as this theory is, there is no evidence that the song has anything to do with the plague.

An alternate explanation for its popularity was that it provided a way for adults and children alike to get around religious prohibitions on dancing, essentially being able to dance without the accompaniment of instruments.

9. Hey Diddle Diddle, The Cat and the Fiddle 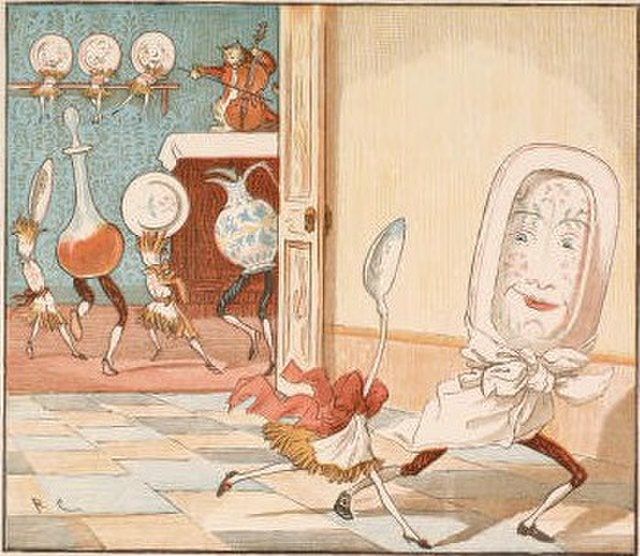 Like several other rhymes in this list, Hey Diddle Diddle was first published in its modern form in 1765 in Mother Goose’s Melody. However, its origins are older, possibly dating back to the Middle Ages, when images of cats playing the fiddle appeared in several illuminated manuscripts.

While there are numerous theories about the origins of this delightful rhyme, historians agree that there is little to support most of them. Most likely, it simply grew out of other, earlier rhymes into a fanciful piece of doggerel.

In the 16th century, “The Cat and the Fiddle” was a popular name for inns. 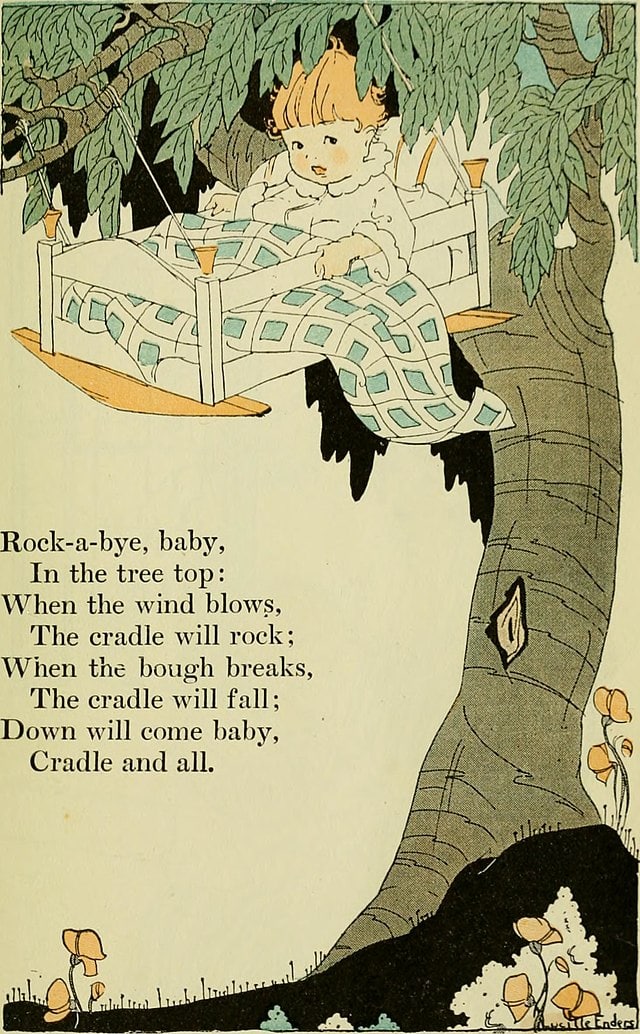 While not the oldest rhyme on our list, “Rock-a-bye Baby” might be the oldest American nursey rhyme. The Oxford Dictionary of Nursery Rhymes credits it with being the first English-language nursery rhyme written in the New World and dates it as early as the mid-1600s. Its first appearance in print, however, was in England in 1765 in Mother Goose’s Melody, a collection of rhymes for children,.

Theories about its origins abound: that it was a reference to Native American women who suspended their babies in cradles from trees to rock them to sleep; that it grew out of a legend about a British family that lived in an enormous yew tree; or that it evokes Britain’s “Glorious Revolution,” in which King James II was deposed by the “Protestant Wind” in the form of William of Orange.

Regardless of its origins, it remains one of the most enduring and popular rhymes.

When first published, the rhyme was given the following footnote: “This may serve as a warning to the proud and ambition, who climb so high that they generally fall at last.” Perhaps it is best understood as a cautionary tale. 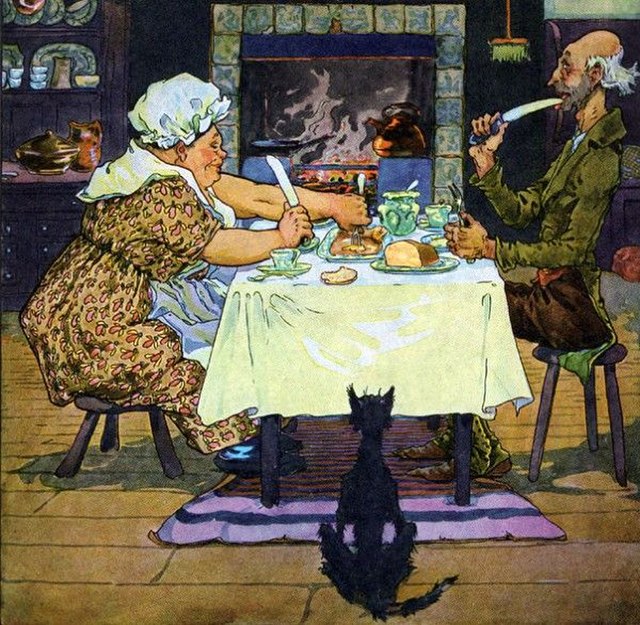 A version of Jack Sprat and his wife (in this case, Jack and “Jull”) appears in a collection of sayings published by John Clarke in 1639. It was included in Mother Goose’s Melody in 1765, but was probably in use as a children’s rhyme well before that.

It has been suggested that Jack Sprat had its origins in political satire, possibly as a reference to King Charles 1, whose coffers were “lean” after parliament denied him taxes. Another theory is that it dates back as far as the legend of Robin Hood and refers to the evil King John and his greedy queen.

In the 16th century, the term “Jack Sprat” was used for unusually small people. 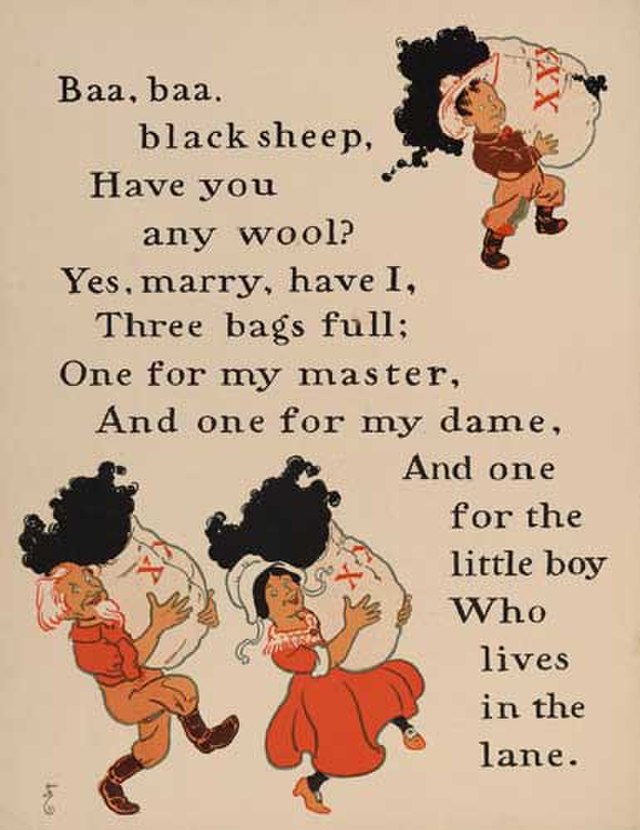 This simple little rhyme has changed very little since it was first published in a collection of nursery rhymes in 1744. Some historians, however, think that it dates back much further to the Great Custom, a tax on wool imposed by Edward I in 1275, who needed more money to pursue his wars in the Middle East. One third of the wool went to the “master” (the king), one-third to the “dame” (the Church), and one third to the farmer (“the little boy who lives down the lane”).

More recently, the rhyme has come under fire as a possible reference to slavery. Critic cite the “black” sheep and the use of the word “master,” but there is no solid evidence that it refers to slaves or the slave trade.

This rhyme is usually sung to the same tune as Twinkle Twinkle Little Star and the Alphabet song.

5. London Bridge is Falling Down 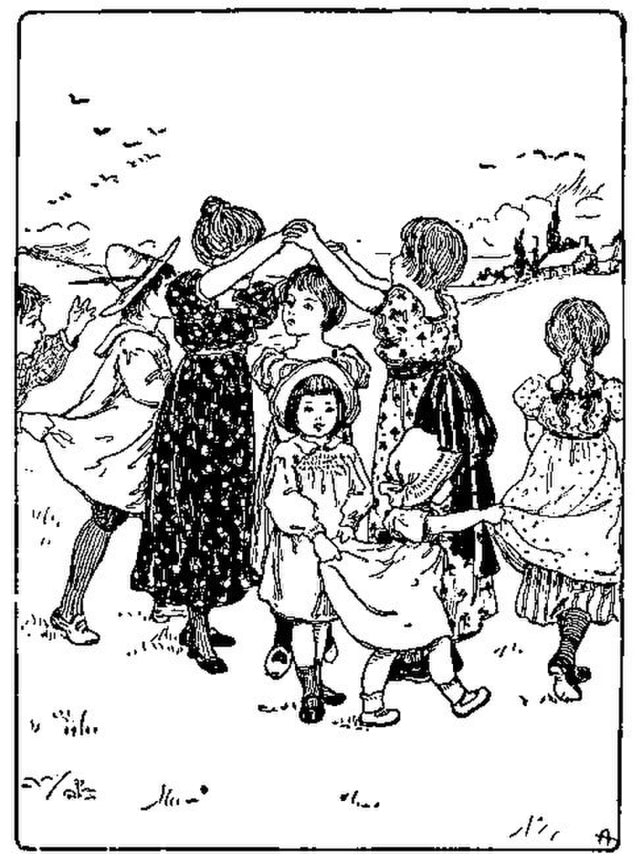 Like Ring around the Rosie, London Bridge is Falling Down is both song and game. For generations, children have chanted it while hoping not to be “caught” when the bridge falls down. This little rhyme was mentioned in a 1657 English play, but was not printed in full until it was published in Tommy Thumb’s Pretty Song Book in 1744.

It is possible, however, that its origins are much older. In a book of Norse poems written in 1230, mention is made of an attack by Vikings on London in 1014 that, according to legend, resulted in the destruction of the bridge. One verse translates as, “London Bridge is broken down. Gold is won, and bright renown.”

While the first two verses are well known, there are actually eleven verses in total.

The original London Bridge did not fall down but was pulled down deliberately in 1831 to make way for a newer, wider bridge. 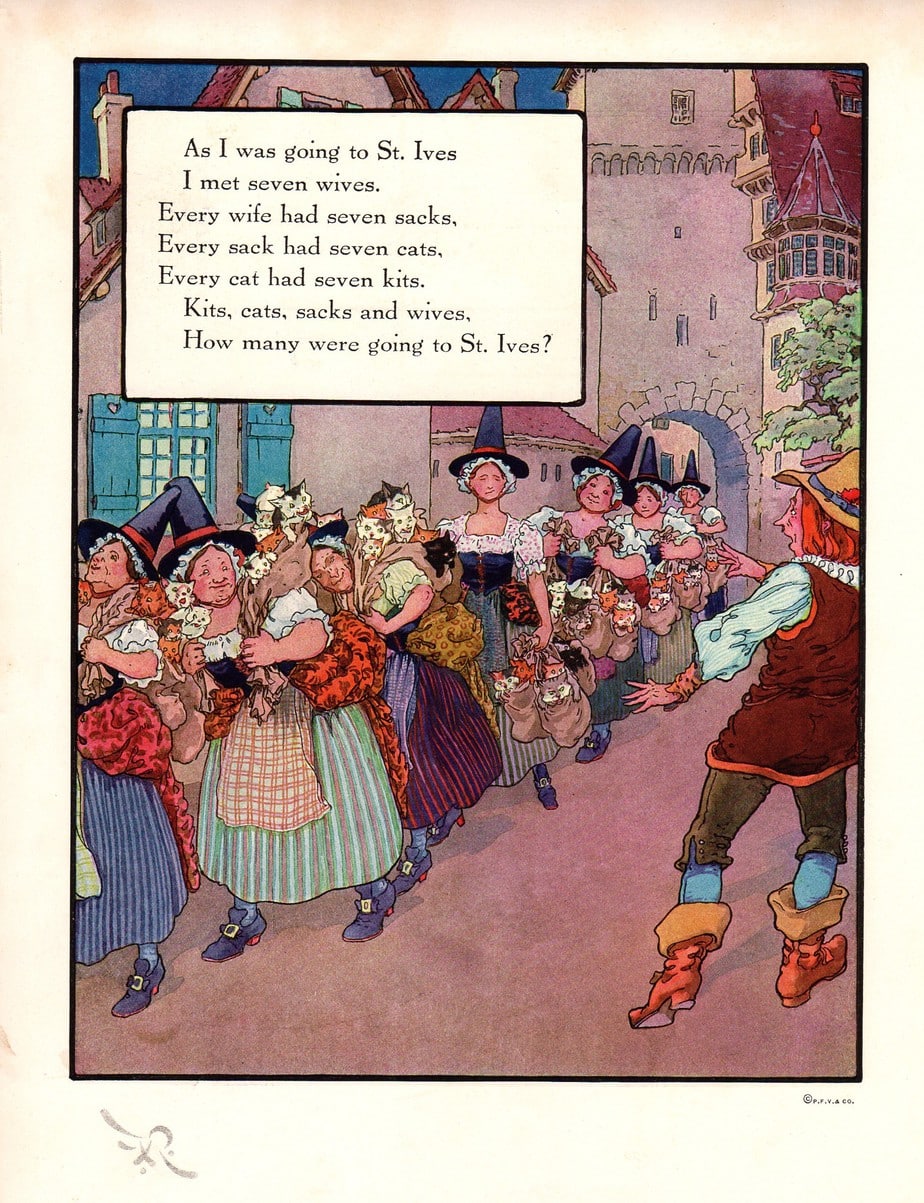 Did you ever try to multiply 7 x 7 x 7 x 7 only to find out that the answer is one? You’re not alone; this charming riddle dates back to a manuscript from 1730, with a version involving nine wives, sacks, cats and kittens. The modern version, with seven wives, etc. first made its appearance in 1825.

Interestingly, the earliest versions of this nursery rhyme say, “I met nine [or seven] wives”; it’s only later that “I met a man with seven wives.” As  polygamy would have been unusual for a 17th century Cornish village it’s more likely that the word “wife” was used at the time to mean “woman.”

“As I was going to St. Ives” is referenced in both Sesame Street and Die Hard 3. 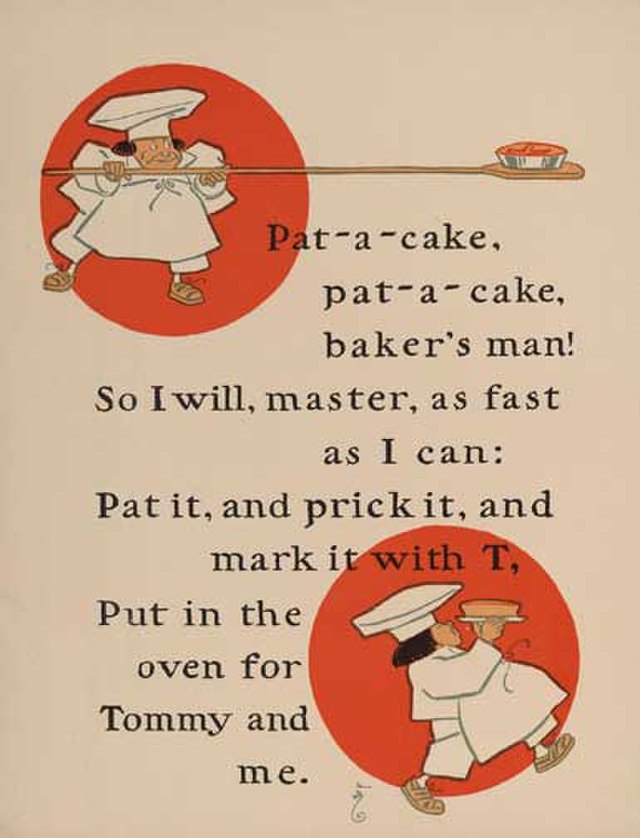 It appears again, much closer to its current form, in Mother Goose’s Melody in 1765, but had probably caught on as a children’s rhyme well before that.

Centuries ago, few people had ovens in their homes and would mark their uncooked pastries with a symbol or letter before taking them to be baked at communal ovens. The Pat-a-Cake rhyme is apparently reference this old custom.

2. To Market to Market 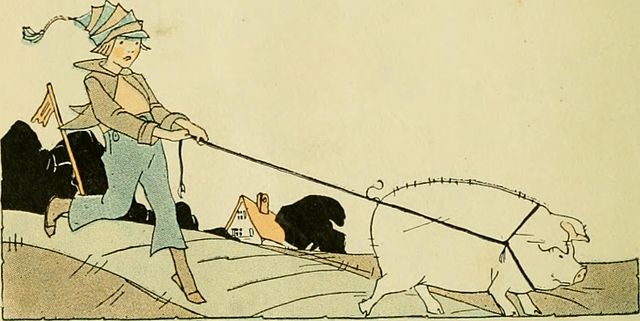 This “knee-bouncing rhyme” is often thought to have originated in 1805, when it was published in Songs for the Nursery. However, it was first recorded in 1598 in A Worlde of Wordes, or Most Copious, and exact Dictionarie in Italian and English, published by John Florio. It appeared again in the 1611 edition of that book.

There have been many variations on this rhyme: going to market to buy a hen, a penny bun or a plum cake, for example. 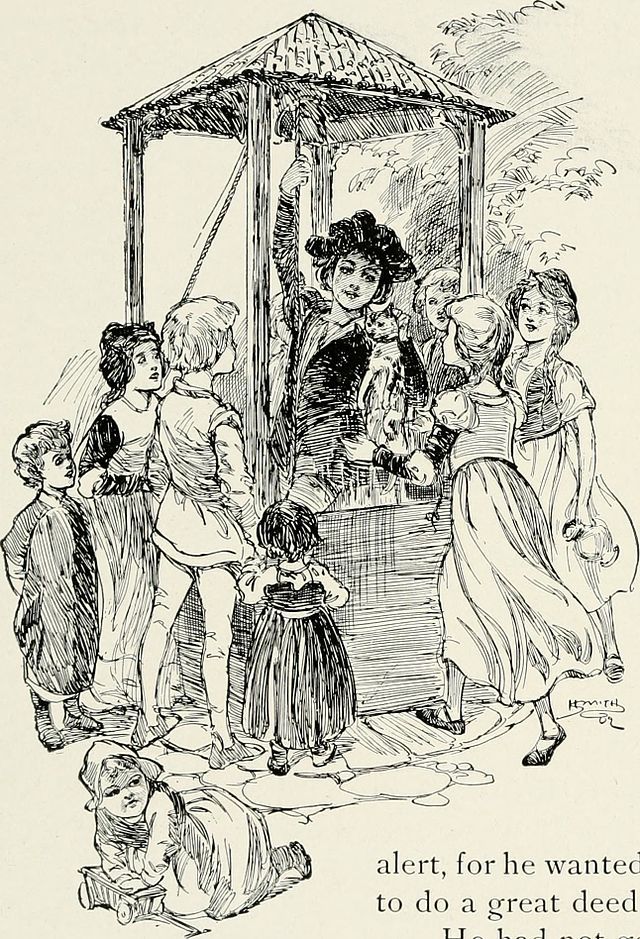 Ding Dong Bell is the oldest recorded nursery rhyme in the English language. In the earliest version of this rhyme, recorded in 1580 by John Lange, the organist of Winchester Cathedral, the unfortunate cat does not make it out of the well, and the bells are a death knell.

Later versions, however, turn the little ditty into a morality tale; while the naughty Johnny Green throws the cat in the well, the good Tommy Stout pulls her out, and the rhyme is clearly meant to teach children not to be cruel to a harmless animal.

Posted by Victor Eaton 0
Spread the loveOld school hip hop is responsible for some of the most beloved songs in pop culture. From the… 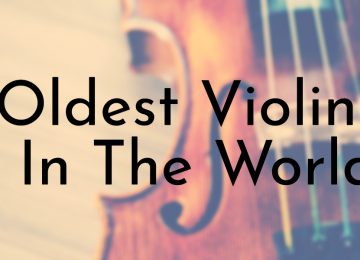 Posted by Lauren Johnson 0
Spread the loveLike music itself, the violin has a long, storied history crossing many generations and countries. The violin’s design…