There’s probably no single film franchise that has captured the world’s attention and imagination like Star Wars. And while there have been dozens, if not hundreds, of spin-off products, from comic books to theme park rides, few have been as long-lived and as well-loved as the LEGO Star Wars sets.

The LEGO Group partnered with Lucasfilm in 1999. It was Lego’s first licensing arrangement and it proved so successful that Lego quickly partnered with several other franchises, including Harry Potter and Marvel.

Originally, the agreement with Lucasfilm ran until 2008, but the sets were so popular that the license was extended three more, first until 2011, then 2016, and finally again until 2022.

To date, the Lego Group has released 796 Star Wars-themed sets and has also has spun off into Star Wars video games and short movies. 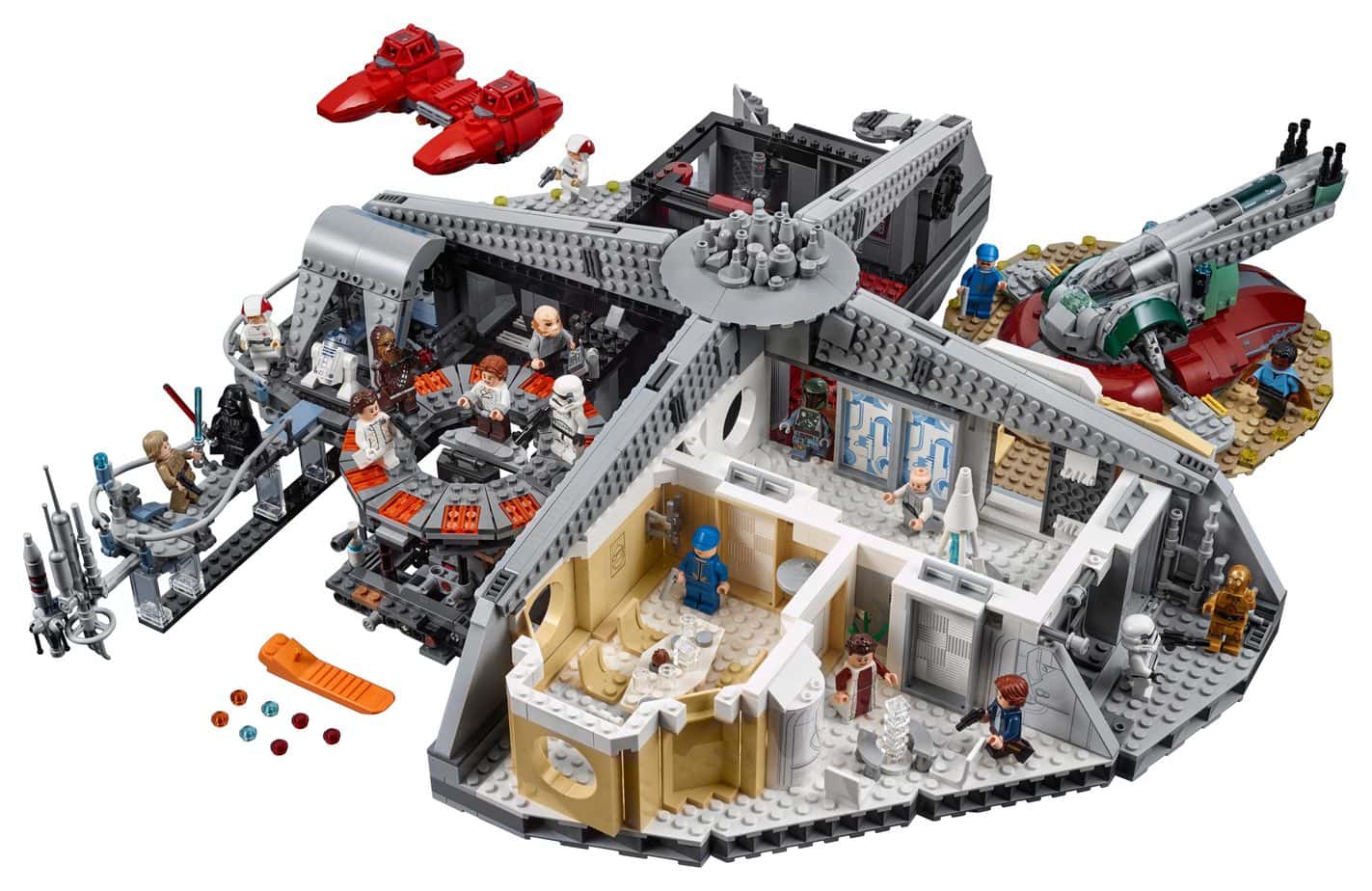 While not particularly old relative to other sets, Betrayal at Cloud City was the first of the Master Builder Series (MBS). Although they have hundreds of pieces, the MBS sets are designed to be played with, as opposed to the Ultimate Collector Series (UCS) sets, which were designed for display.

Cloud City, from The Empire Strikes Back, is an incredibly detailed set, complete with carbon freeze chamber, interrogation room, Boba Fett’s Slave I ship, a garbage processing room with incinerator, the sensor balcony  where Luke and Darth Vader fought their climactic duel, and much more. There are also 18 minifigures and two droids.

The instruction manual for Cloud City includes an interview with the set designer, Hans Burkhard Schlömer, as well as Madison O’Neil, who created the graphics. 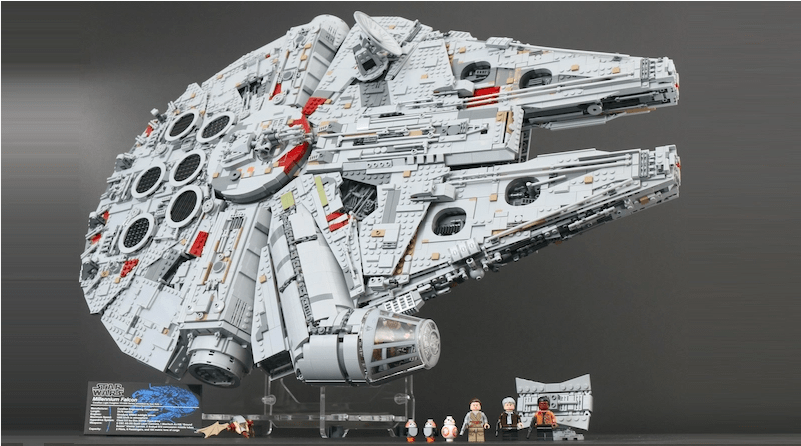 With 7,541 pieces, the 2017 Ultimate Collectors Series (USC) version of the Millennium Falcon has the most bricks in any Star Wars Lego set ever released, and the second-most of any commercially released Lego collection.

Like other sets in the UCS, it was designed for display, rather than for playing. Even so, it includes removable hull panels, a lowering boarding ramp, concealed blaster cannon, and interchangeable sensor dishes. It includes four minifigures from Star Wars: A New Hope—Han Solo, Chewbacca, Princess Leia and C-3PO—as well as three minifigures from Star Wars: The Last Jedi—Older Han Solo, Rey, and Finn.

This set also holds the record for most expensive set in the Star Wars collection. 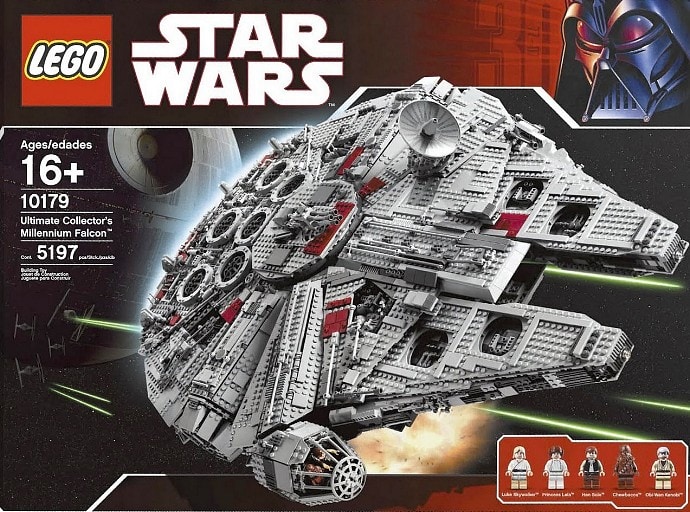 Not to be confused with the Millennium Falcon 75192 (above), The Ultimate Collector’s Millennium Falcon was on the market for less than 3 years and now stands out as the rarest of the Star Wars Lego sets. This replica of Han Solo’s ship includes minifigures of Han Solo himself, Luke Skywalker, Chewbacca, Leia Organa, and Obi-Wan Kenobi.

Although a mint condition, unopened set sold at auction for $15,000, the average cost for one is currently about $3,500.

The instruction manual for this set is 311 pages long! 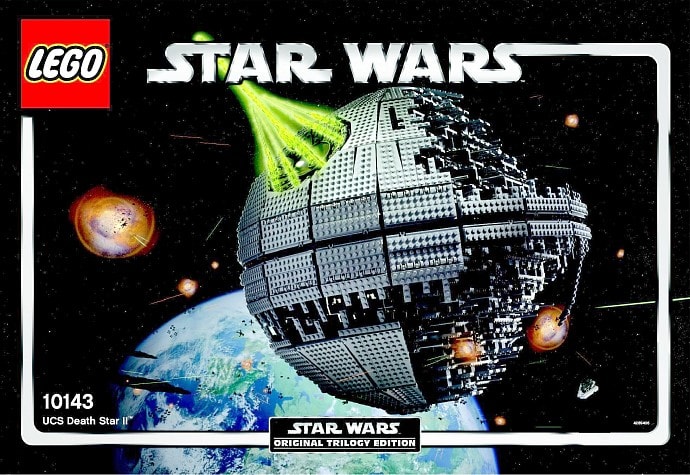 There have been several Lego Death Stars, but interestingly, the oldest is not of the original Death Star, but the Death Star II from Star Wars: Episode Vl: Return of the Jedi.

Another Ultimate Collectors Series set, it was aimed at people aged 16 and up. At the time of its release, it had the most number of pieces ever. Like most UCS sets, however, there were no minifigures included in the set.

There have been a total of three Lego Death Star sets. 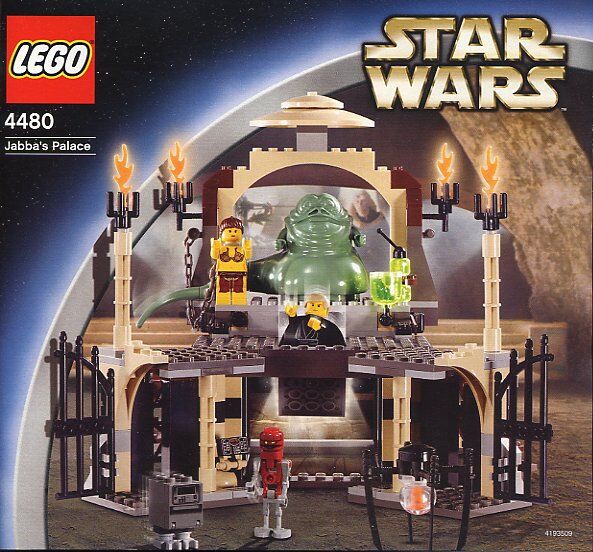 It may not come as much surprise that this set’s Jabba the Hut was the largest minifigure created to date.

Along with Jabba, there were four other new minifigures: Princess Leia (Slave),  B’omarr Monk, EV-9D9, and a Power Droid. Only the Luke minifigure had been seen in earlier sets.

The palace is complete with a trapdoor in the floor for Jabba’s unfortunate victims to fall through. 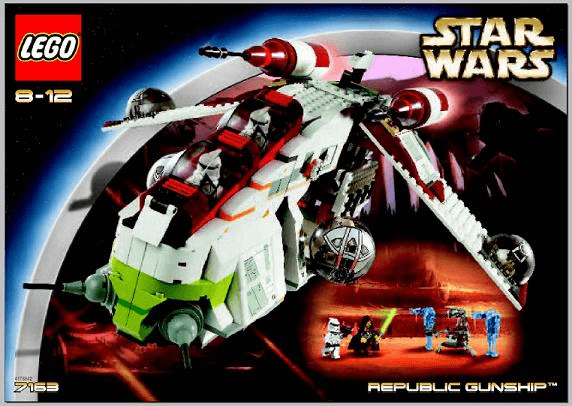 Notable among them was the Republic Gunship, the only set that includes blue Super Battle Droids. It included 8 minifigures.

“Jedi Bob,” an unnamed Lego character nicknamed Bob by fans, makes his one and only appearance in this set. 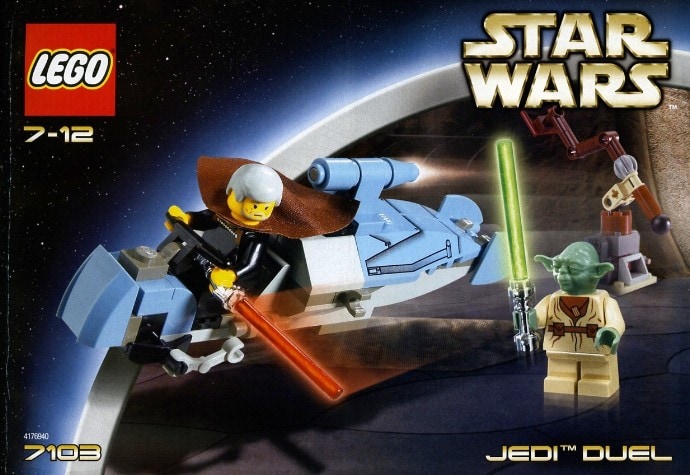 Also released in 2002 was this relatively simple set, aimed at children ages 7-12. It is notable for being the first time that Yoda, one of the franchise’s most beloved characters, appears as a minifigure. It also includes Count Dooku, allowing players to recreate the epic battle scene in Attack of the Clones between Yoda and Dooku.

Although this set depicts a scene from Episode II: Attack of the Clones, Yoda’s necklace and clothing are from Episode V: The Empire Strikes Back. 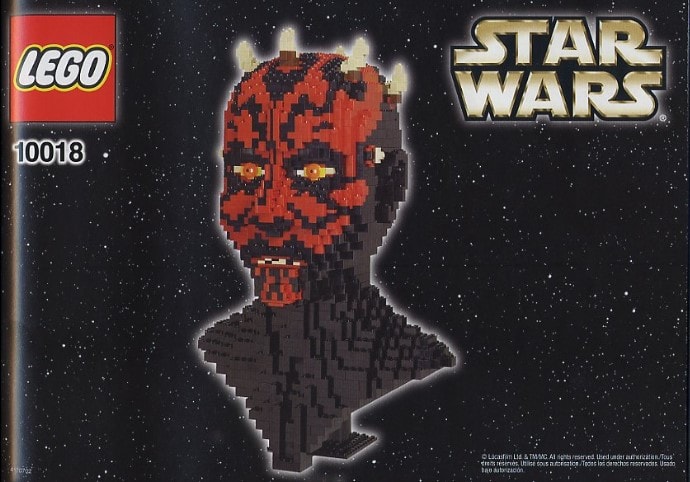 Only 10 Star Wars Lego sets were released in 2001, the most unusual possibly being this bust of Darth Maul. At the time, it was the largest set ever released and to date, it’s the only Lego Star Wars bust ever released.

As part of the UCS, the Darth Maul Bust is meant for display, not play, and has no moving parts. 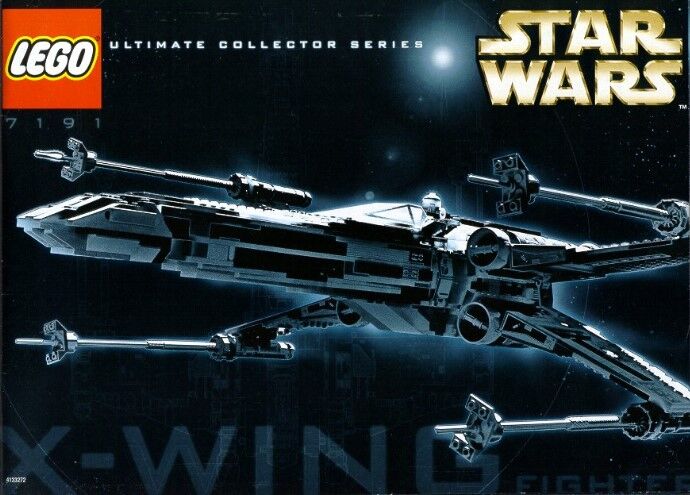 In 2000, Lego launched the Ultimate Collector Series. More expensive and vastly more detailed than regular sets, they were designed to appeal to older children and adults. They focused not on specific scenes or characters but on the most iconic spaceships of the Star Wars universe.

The oldest of the UCS sets, this X-Wing Fighter comes with a display stand and a detailed spec plate. It includes an R2-D2 minifigure that can sit in the cockpit..

Built to scale, the X-Wing Fighter has a wingspan of 20″. 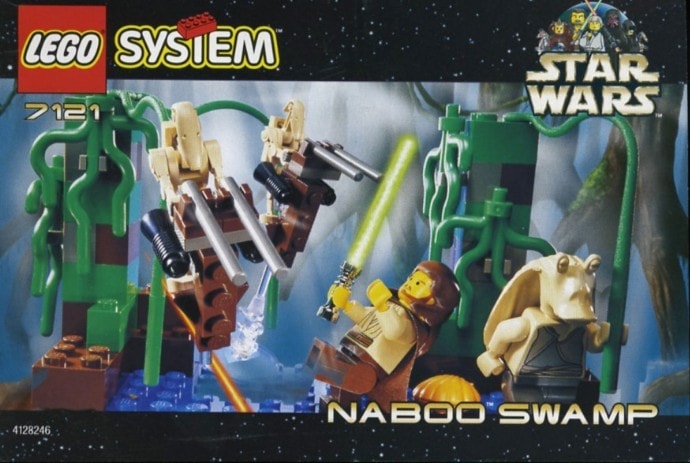 Along with Lightsaber Duel (below), Naboo Swamp was one of eight sets released in May of 1999 to coincide with the release of Star Wars: The Phantom Menace. It contains the first Single Trooper Aerial Platforms to appear in a set. 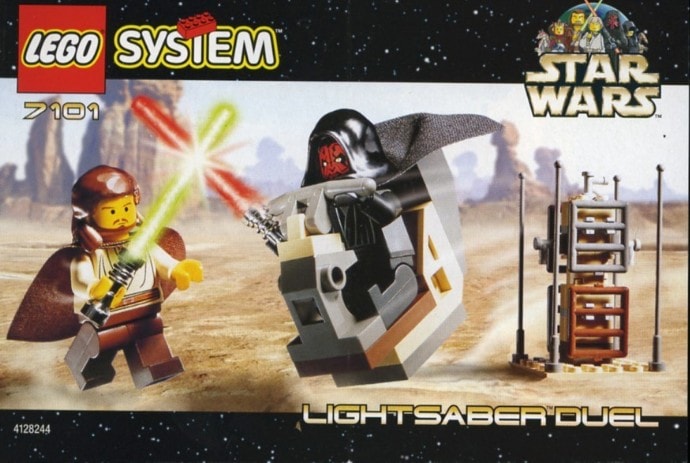 With its low retail price and small number of bricks, this simple set was aimed squarely at the children’s market. It included a Darth Maul minifigure with a red light saber and a Qui-Gon Jinn minifigure with a green one.

This set includes a moisture vaporator even though there was no such item in the movie itself. 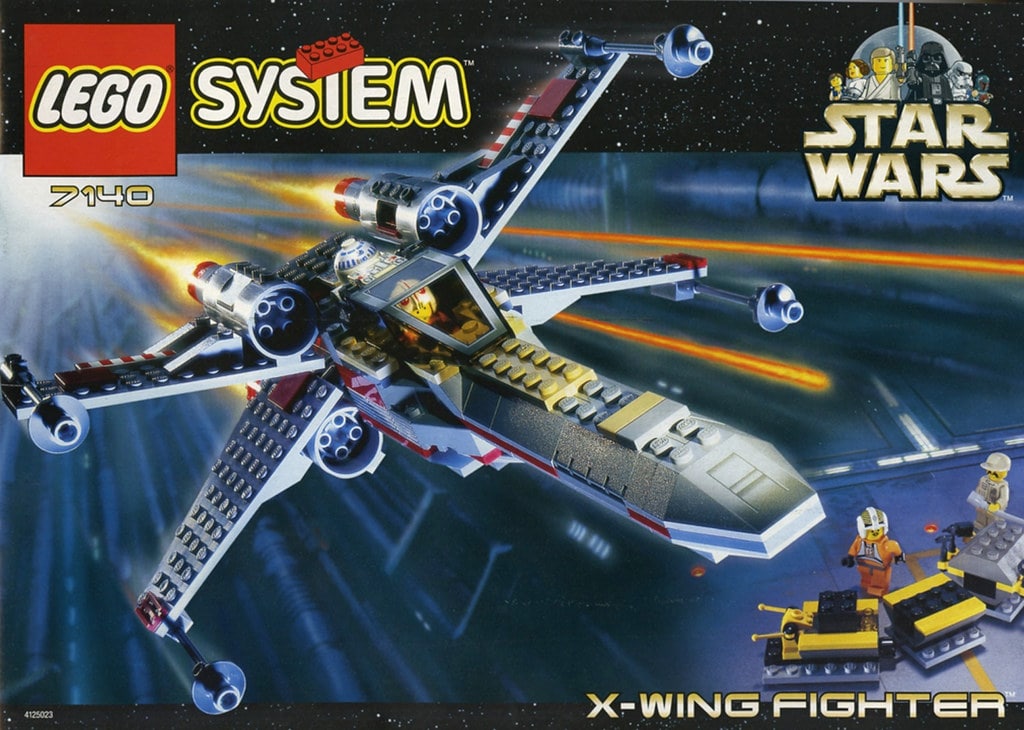 7140 X-Wing Starfighter is the oldest Star Wars LEGO set. It was one of five sets released in early 1999 in anticipation of Phantom Menace’s release later that spring, but all five sets referred back to the original trilogy.

Luke Skywalker makes the most appearances in the Star Wars Lego sets of any minifigure.