For thousands of years, the iconic plaid-patterned tartans associated with the Scottish highlanders have captivated their friends and foes. The origin of the word and concept is complicated and ancient, though only rumors of tartans older than the 19th century existed until American archeologists led by Elizabeth Barber began fascinating studies that uncovered millennia of Scottish textile history.

Those interested should check out her book, The Mummies of Ürümchi.” This article should provide a guide to the whole history of tartans, now enlightened by research and revealed as the staple of antiquity it rightly should be. Here are the 8 oldest tartans, according to the latest information uncovered by researchers. 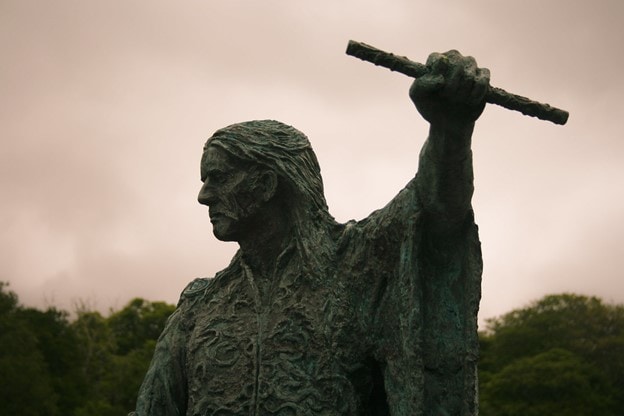 Red Hugh O’Donnell escaped imprisonment in Dublin Castle at the hands of the English to win a succession war and become the king of Tyrconnell in 1593. This was the name of one of the kingdoms of Gaelic Ireland. In a struggle against Queen Elizabeth I, O’Donnell recruited auxiliaries from Scotland, who provided an early demonstration of tartans in action.

Described as “mottled garment[s] with numerous colors hanging in folds,” the tartans announced a tradition that, little known to O’Donnell, stretched back thousands of years.

These soldiers were Hebrideans, auxiliaries recruited from the Hebrides, islands off the Northwest coast of Scotland. The Irish soldiers recognized the distinct tartan patterns and the Scots language, with other accounts mentioning the wide array of colors. 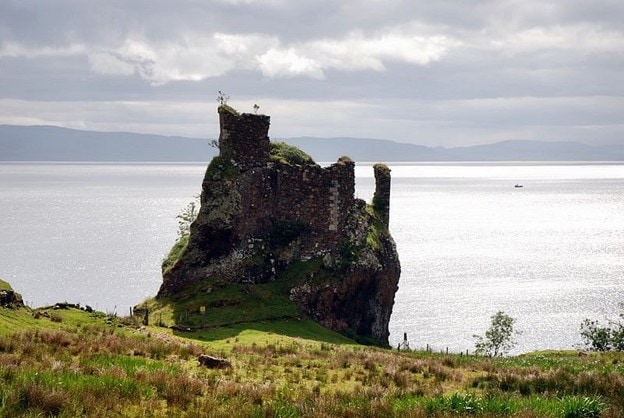 John, Bishop of Glasgow in 1471 was the treasurer of King James III. He described Tartans in the 1470s, saying, “Halve ane elne of doble Tartane to lyne ridin collars to her lade the Quene.” One he described as being 37 inches long.

You don’t have to be able to read that Scots text, derived from the recently replaced Scottish Gaelic, to interpret his observation of tartans as historically significant. In terms of tracing the cloth to its origins, he provides a valuable early account.

Before 1400, Latin had been the primary language in the monarch of Scotland in all religious, legal, and royal affairs. John’s use of a Scot’s dialect in 1471 points to Scotland’s changing attitudes towards their native traditions, which included a more widely used national language, even in court. 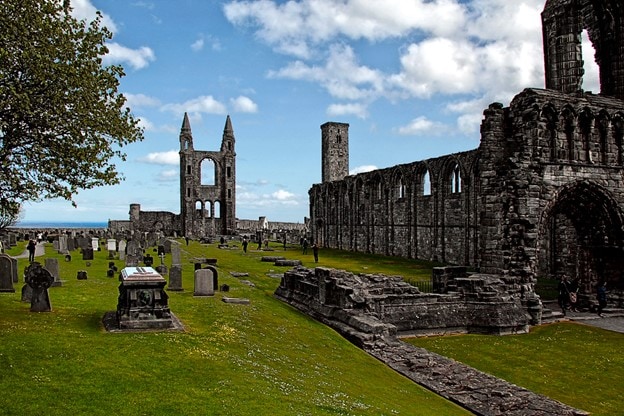 T(h)urgot wrote of the “multi-colored clothes” of the Celts in legal documents penned around 1100, nearly 1,000 years after our last clear mention of tartan cloth. The text provides valuable insight into the centrality of the practice in Scotland, leading into the modern age.

The Bishop of St. Andrews was originally called “church of the king’s mounth.” The “mounth” was the upland in North Scotland, with its steep hills and mountainous grasses. 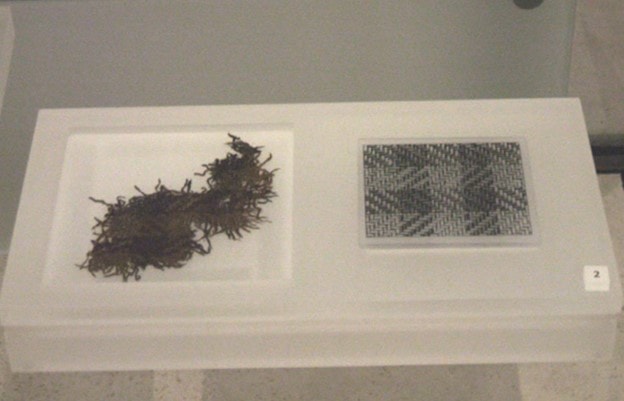 In the National Museum of Scotland, you can view the Falkirk Tartan, one of the oldest examples of genuine Scottish weave anywhere. Dated to about 250 AD, this piece of tartan was recovered from a clay pot in the area of Scotland that was once occupied by Rome. The Antonine Wall, as it was called, has provided many invaluable cross-cultural treasures, including this cloth.

The Falkirk tartan is a similar tweed to those found in Hallstatt (see later on this list). The yarn is undyed, giving it the muted colors we mentioned, which are actually significant. Two-color brown and white wool patterns may signify a poor family who could not afford plant dyes. However, it may also signify a family of shepherds and cattle drovers who simply created the pattern from what they had.

The Falkirk tartan was found in a clay pot with 2,000 silver Roman coins. Whoever placed it there was hiding the coins and stuffed this random cloth to conceal them.

2,000 years later, the coins are merely additional artifacts from a plentiful trove of commonplace currency. However, the random cloth is a priceless treasure! 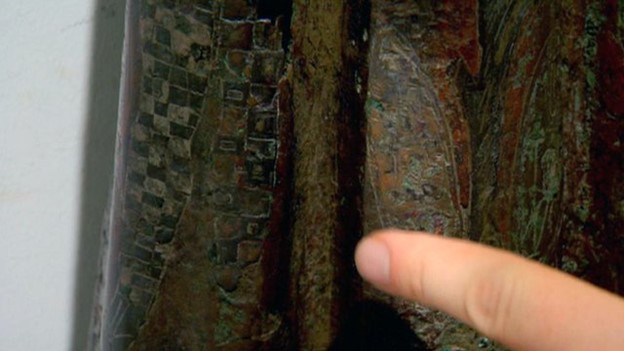 Tartans were worn by the ancient Celts not only as a sign of tribal allegiance but as normal clothing. Roman writing from the early ADs suggest that the Celts wore them regularly (they described them as “striped,” since they may have lacked a descriptive word for plaid patterns).

This statue, erected sometime in the 200s, was part of a triumphal arch in Volubilis. This was an ancient city in Morocco, thousands of miles from Scotland. A fragment of the statue was discovered in the vicinity bearing the resemblance of a tartan pattern on the pants of the figure of the prisoner. To depict the unmistakable texture of a plaid tartan cloth, the statue was inlaid with bronze, silver, and other alloys to create an analogous palette. We have only three feet of the statue now, but it serves as a testament to one of the oldest known tartans.

The statue was of the Roman Emperor Caracalla on his war chariot. He called himself the Caledonian’s conqueror and held one captive in this particular figure. “Caledonian” if you didn’t know, is the term the Romans used for the “barbarians” that lived in tribes north of Hadrian’s Wall. This included the Celts. 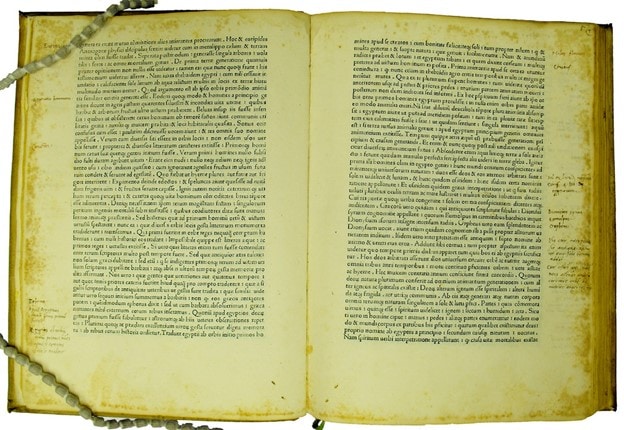 Diodorus Siculus was a Greek historian who made mention of Celtic dress in 100 BC, providing early insight into the history of tartans. Diodorus called the pattern “brightly colored and embroidered … checkered in design, with the separate checks close together.”

Researchers believe he is observing the tartans worn by the Celts at this time, which before more recent archaeological findings offered the only ancient evidence we had of tartans predating the 1800s.

Diodorus is a primary source for discovering anything about the history of the world. He wrote the monolithic text, Bibliotheca historica about the geography, culture, and history of the world up to that point. These forty books (!) offer valuable insight into the Gallic Wars and Alexander the Great as well as Mesopotamian, Egyptian, Scythian, Arabian, African, Greek, and European cultures, including the Celts. 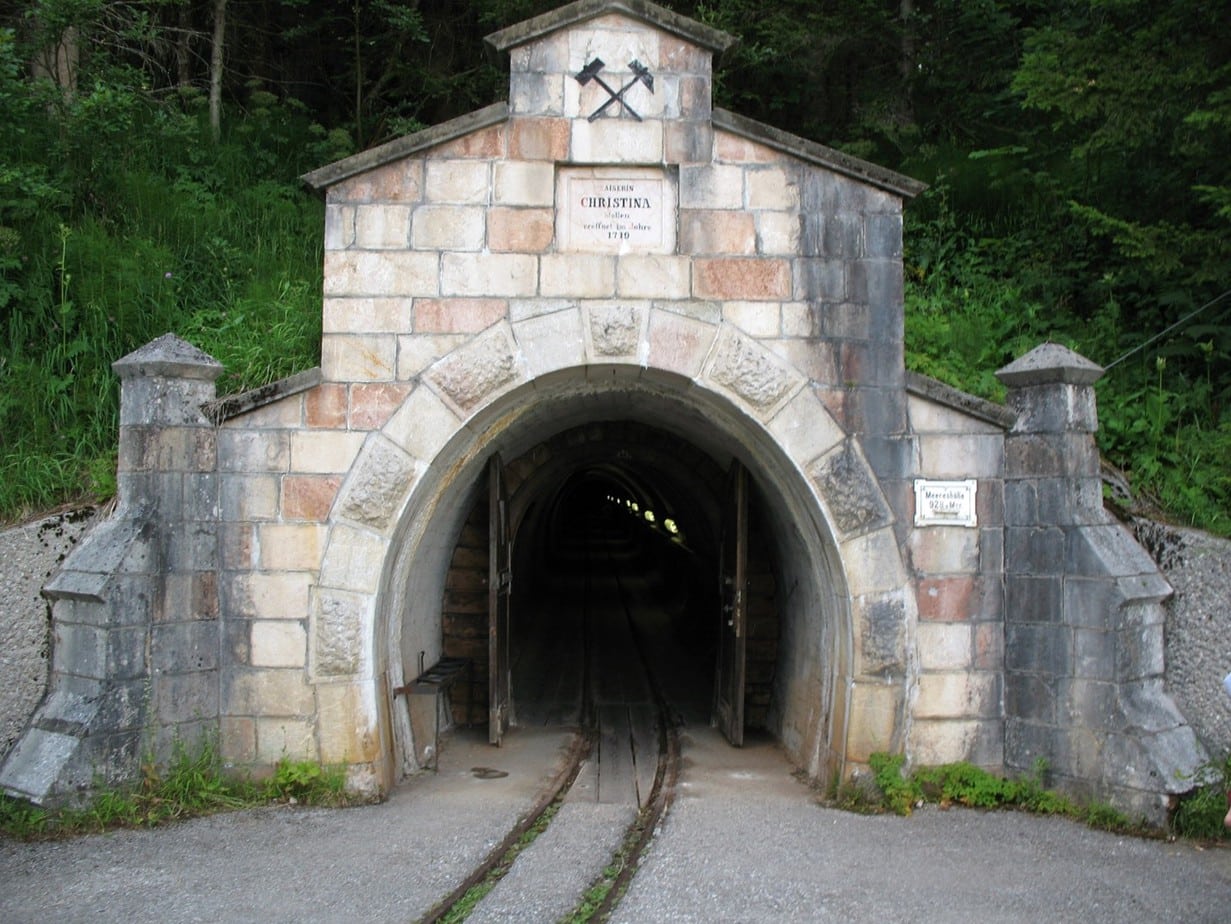 These tartans discovered in 2004 have been dated between the 4th and 12th centuries BCE. The Hallstatt mines are near a village by a lake in the Austrian Alps near Salzburg. The ancient Celtic settlement here was a precursor to the later La Tène culture throughout Europe.

The plaid twills discovered here were bright and beautifully preserved despite being thousands of years old.

During the Iron Age of Europe, the La Tène culture came after and from the Hallstatt culture in Western Europe. These people were advanced metalworkers and farmers connected by trade to the Mediterranean. The elite classes in the Hallstatt culture were living in a tribal system ruled by chieftains, based on warrior status and family lines.

It is not known precisely where the Hallstatt culture intersected with tartans. However, their warrior class practices bear many similarities. 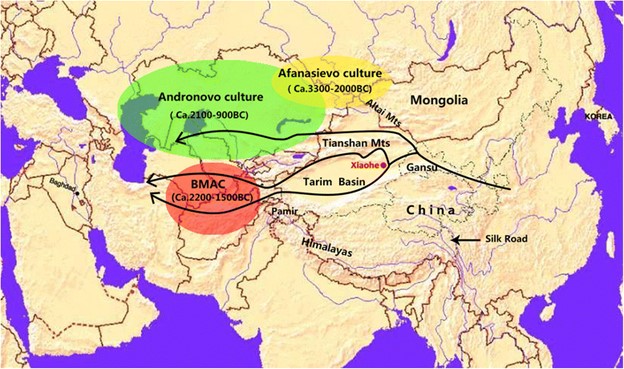 The oldest tartans are the Tarim Basin Tartans. These were discovered by Elizabeth Barber in 1993 and are the subject of the book we mentioned at the top of this article, The Mummies of Ürümchi. Ürümchi is in fact the desert city in China where these mummies, strangely Caucasian in appearance, were found.

The discovery of mummies in this region with fair hair, round eye sockets, and other non-Mongoloid features was surprising. Anthropologists had assumed that Mongol and Turkish peoples roamed this entire area to the exclusion of any outsiders. Fragments of cloth on these mummies’ bodies showed an Indo-European origin similar to Neolithic clothing studied far West in Europe.

This makes these fragments the oldest tartans ever discovered.

While the slivers of cloth are not a full tartan, many metrics support the hypothesis that these are the oldest pieces of tartan ever recovered. Barber, a renowned textile expert, presented several defining features that the fragments have in common with tartan cloth.

Firstly, the cloth bears a resemblance to the cloth at the Hallstatt mines, mentioned above. Patterning recalls 17th century Scottish design. The wool feels right, contains alternating thick and thin bands of color distinctive of tartans, and has woven parallel ridges, or twill, similar to Scottish weavings.

The Tartans represent the pride Scotlanders have in their warrior clans, family, and Gaelic culture. This symbolic dress is no longer just the clothes themselves but the pattern, the idea of tartans in the abstract. For instance, even a tartan poster could be a “tartan” today.
It’s all about what it means. And these eight historic examples of old tartans show the long impact of celebrating Gaelic culture and the lengths to which many have gone to preserve it. Who knows? Someday we may find some even older!

Posted by Victor Eaton 0
Spread the loveWhen was the last time you set foot in a bookstore? Today, buying books consists of browsing web…

Posted by Victor Eaton 0
Spread the loveWhile there’s no doubt that literature is an art form, book covers and jackets are a category all…

Posted by Lauren Johnson 0
Spread the loveAlthough modern society is moving away from using physical currency, coinage has been used by people for thousands…

Posted by Shasha Neil 0
Spread the loveArchaeology has roots dating back to the early civilizations that were curious about the past. The Greek historian…