Finding a message in a bottle has often been romanticized by popular culture as it connects the finder with the sender of the letter through time and a distant location.

Although messages in bottle can be sent adrift for fun, most of the time they are used in scientific research to chart ocean currents.

In fact, using bottled messages to study the ocean currents dates back to about 310 BCE.

Whatever the reason may be for sending out a message in a bottle, finding one is exciting, especially when the message is over 100 years old.

All of the messages on this list are over 90 years old and a majority of them are from over 100 years in the past. 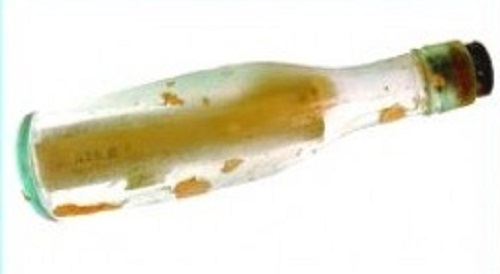 In 2006, Scottish fisherman, Mark Anderson, found a 92 year old drift bottle that was released by the Marine Laboratory of Aberdeen, Scotland in 1914. For the next six years, Anderson’s discovery was in the Guinness World Records as the oldest message in a bottle ever found.

In a fun twist of fate, Anderson’s record was broken in 2012 by his friend Andrew Leaper (further down on this list) who found a similar message that was six years older than Anderson’s. The bottle contained a postcard identifying it as message 423B and was used to study Scotland’s ocean currents. 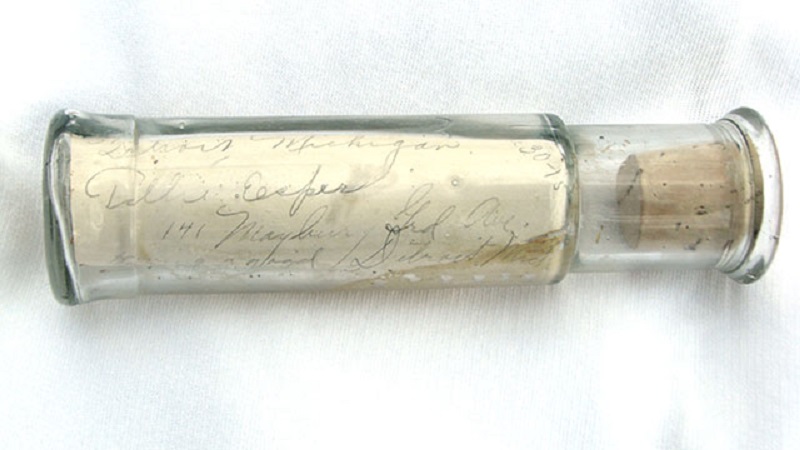 In June 2016, diver David Leander found a 96 year old message in a bottle buried in the dirt near where the Tashmoo steamship used to dock daily, ferrying passengers to Tashmoo Park on Harsens Island at the northern end of Lake St. Clair.

The message was written in 1915 by two girls from Detroit, Selina Pramstaller and Tillie Esper. At the time of the bottle’s discovery, Bernard Licata, president of the Harsens Island St. Clair Flats Historical Society, said that he wanted to find Epser’s and Pramstaller’s descendants.

Eric Schiebold, who is Esper’s grandson, came across the story in the news and contacted the historical society to meet everyone involved with finding the bottle.

In 2012, a Scottish skipper named Andrew Leaper found a 98 year old message in a bottle, which at the time was confirmed as a new record by Guinness World Records.

The bottle was sent adrift in June 1914 by Captain CH Brown of the Glasgow School of Navigation.It was part of a batch of 1,890 scientific research bottles which were used to help map currents of the seas around Scotland — only 315 of the bottles have been returned.

When Leaper opened the bottle, he found a postcard promising a reward of six pence to the finder. The bottle along with Leaper’s Guinness World Records certificate, were donated to the Fetlar Interpretative Centre in Shetland. 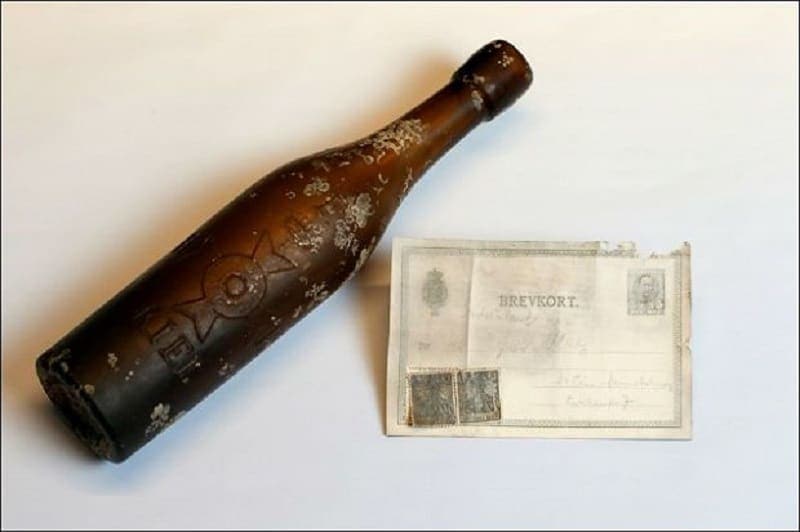 When it was first discovered, the 101 year old message in a bottle was believed to be the oldest ever found. In March 2013, a German fisherman found the bottle in the Baltic Sea off the coast of Kiel. Inside the bottle was a postcard written by a man named Richard Platz and dated May 17th, 1913.

Researchers studying the message managed to track down Platz’s 62-year-old granddaughter Angela Erdmann, who is from Berlin.

Platz’ postcard asked the finder of to return it to his home address in Berlin, which moved Erdmann to tears. Researchers were able to authenticate the postcard by comparing the writing with letters penned by Platz. 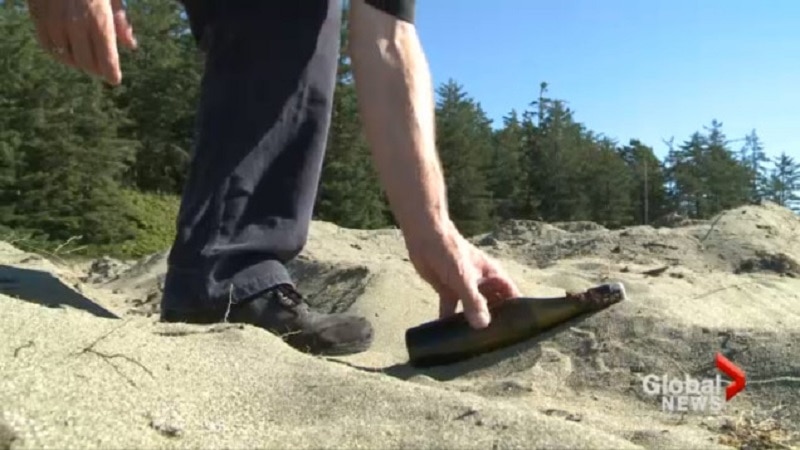 The 107 year old message in a bottle found by Steve Thurber in 2013 is not usually included on lists discussing the oldest messages in bottles because he refuses to let anyone open the bottle to verify its contents.

Thurber said that he doesn’t want to open the bottle because its been sealed for over one hundred years. He also said that he was able to read the lettering on the outside of the envelope in the bottle.

According to the envelope, the message is from Earl Willard and dated Sept. 29, 1906. The envelope also says that Willard threw the bottle overboard 76 hours into a trip from San Francisco to Bellingham, Washington.

2. Message from Marine Biological Association of the United Kingdom

The 108 year old message from marine biologist George Parker Bidder is recognized as the oldest message in a bottle ever found by Guinness World Records. Parker, who worked for the Marine Biological Association of the United Kingdom (MBA), launched the message into the North Sea in 1906 as part of a research project studying the patterns of ocean currents.

The message was one of more than 1,000 bottles thrown into the sea. It was found by a German woman who filled out the enclosed postcard, which promised a reward of one shilling for its return. The MBA managed to find an old shilling on eBay and awarded it to the woman. 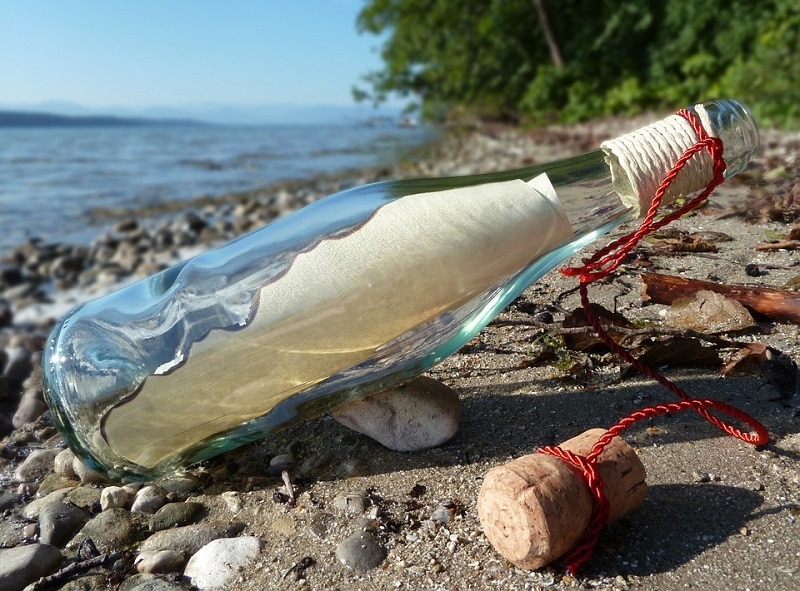 A message from Chunosuke Matsuyama, a Japanese seaman, and his 43 shipmates is believed to be the oldest message in a bottle ever found. Matsuyama and his shipmates were on a journey to find buried treasure on an island somewhere in the South Pacific when they were shipwrecked by a storm.

The crew eventually died of dehydration and starvation. Before Matsuyama died, he carved a message detailing their story onto thin pieces of coconut tree bark and sent it into the ocean.

This message was recovered in 1935 near the shore of Hiraturemura village in Japan, which was supposedly Matsuyama’s birthplace.