Superheroes are some of the most-loved characters in the world. From story-rich comic series to the big screen, these heroes have served as inspiration for many generations. Most of the time, heroes seem to never age, but there are some who have either been allowed to do so or who came into the comic world already being pretty old. Without further ado, here are ten of the oldest superheroes!

Note: Superhero ages have a tendency to switch around and change depending on who’s writing their stories. Comic book franchise universes also go through several reboots and resets, and as such, there are different eras and universes where superheroes have different origin stories and even ages. We’re not focusing on any specific universes, but listing superheroes who were written as being old at any given time in their respective comic multiverses.

John Cumberland, more known as The High, is a mysterious superhero who is almost legend to most who see him. In 1910, he arrived on Earth from a parallel Earth where America was at war and was raised by farmers. He is designed to be analogous to Superman, just like Mr. Majestic.

In 1938, The High became a superhero. He believed that the world was inherently good and sought to keep it safe, but after three years of fighting alongside Jenny Sparks, he became disillusioned and quit the job when he realized that the world would not change for the sake of good alone, but on its own terms.

He became a part of The Changers and nearly met his end while on a mission with them. He was believed to have died, but returned in a later comic series as a shadowy, disfigured version of his former self. He grew in character from being naively apprehensive of the world to believing that there is hope for the future once more.

We’ll admit that Jonas Graymalkin is almost never referred to as a superhero, but he is a mutant and part of the X-Men, and has always fought on the side of the good guys.

Graymalkin was born a whopping two centuries ago. At the age of 16, his father found him fooling around with another boy and was so disgusted by his son’s homosexuality that he beat him until he was unconscious and buried him alive.

Graymalkin’s powers activate in the dark, and being buried meant he was completely removed from the light. This made his mutant side manifest and he remained alive, in suspended animation, for 200 years. It so happens that he was buried near to wear the future school of Professor Xavier was to be set up, and after the school became destroyed in a fight, he was awakened.

Graymalkin’s DNA puts him as part of Professor Xavier’s family tree. He continues to be a part of the Young X-Men.

Icon – originally named Arnus – arrived on earth in 1839 when the alien starliner he was on exploded and sent him, in a life-pod, falling to earth. When he was discovered, the life pod set itself to alter his appearance depending on the first person who found him. He was found by a Miriam, a black slave who adopted him immediately.

Icon took on the name of Augustus Freeman IV and quietly used his powers for good, small charitable acts for most of his life. Then, when his house was broken into, he was forced to visibly use his powers. He was seen by one of the robbers, a teenager named Raquel Ervin – later know as Rocket – who convinced him to become a superhero and taker her on as his sidekick.

He now works by day as a corporate lawyer, but he has not appeared in DC’s New 52 universe as of yet, apart from a brief cameo. 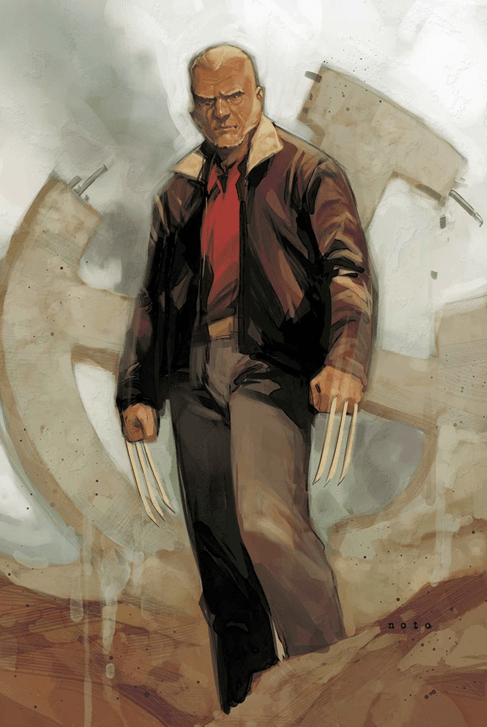 Earth-807128 is a universe where the villains won, and the superheroes were all overthrown. The Logan of this world lives with his wife and two children and occasionally helps out other heroes when they need him.

In the original Old Man Logan arc, Logan is called on by Hawkeye, who is now blind, to help him get safely to New Babylon, where he has a secret package to deliver. He refuses to use his claws as he is traumatized by events of the past.

However, when he returns home, he finds that his family has been murdered by the Hulk Gang, and his fury allows him to unleash his claws at last to seek revenge. It’s pretty grim stuff!

Deadpool – whose real name is Wade Wilson – isn’t exactly the traditional superhero. This well-loved Merc with a Mouth and antihero, known for breaking the fourth wall and using offensively hilarious humor, shot to even more fame after the release of his R-rated movie in 2016.

In current time, Deadpool is certainly not 1,000 years old. However, in the Messiah War arc, we learn that he will grow to be this age – and presumably may live even longer – in the future.

Deadpool’s mental illnesses make his memory of his childhood unreliable, and he does not remember the appearance of his parents or family home. He was born in Canada and joined the U.S. Army Special Forces, but was kicked out after refusing to follow orders that didn’t line up with his morals.

Later, he developed 34 cancerous tumors. He was then approached by Department K, a special weapons development team, and was used for their experiments. The experiments gave him his powers and halted his cancer.

While on Earth, Zealot formed a group of women warriors known as The Coda that fought the Daemonite and protected citizens of the world. She faced trial after trial, even being branded a traitor and then spending a century serving a witch named Tapestry who sought to blackmail her.

Eventually, Zealot took on the name Lucy Blaize and lived in America, working for the US Government for a time in the 20th century. Through the years, she has been a part of Team One, WildC.A.T.s, and Wildcore.

Zealot features as a main character in the WildC.A.T.s animated TV series. She is known for being so skilled in hand-to-hand combat that virtually no one in the WildStorm universe can defeat her in this area of skill.

Born Majestros, Mr. Majestic was born on the planet of Khera, where he was the most powerful warlord on the planet. He was written to be the WildStorm universe’s version of Superman, but with a personality that allowed him to use his full power without fear.

During the war on Earth of the Kherubim and the Daemonite, Mr. Majestic became trapped on the planet and dedicated the next few centuries of his life to serving justice. He joined Team One during the Cold War, and after that, he worked as a government agent and fought paranormal entities with the help of a young and talented sidekick named Desmond. At one point, he took on the alias Jim McArest – an anagram of his own name. He also led the WildC.A.T.s for a time.

Kal El of the DC One Million universe is Superman Prime, and is considered the original Superman that we know and love. After witnessing everyone he knew and loved slowly die one by one at the end of the 21st century, Superman Prime left Earth in the care of his heir Superman Secundus and travelled across the universe

At the turn of the 700th century, Superman Prime ceased his travels and locked himself away in his Fortress of Solitude that he had in the heart of the Sun, keeping himself and his fortress alive by the Sun’s energy.

Thanks to the Marvel Cinematic Universe, Thor is a pretty popular comic book superhero. Based on the Norse god of thunder, Thor is the god of thunder of Asgard and uses an enchanted hammer called Mjolnir to channel his control over the elements.

Thor ends up on Earth when his father, Odin, tries to teach him humility by removing his memories of being a god and putting him into the body of Donald Blake, a partially disabled medical student. While on vacation in Norway later, Donald finds Mjolnir in a cave and transforms back into Thor.

Thor continues living on Earth as his alter ego Donald and works as a doctor in his own private practice, with a nurse named Jane Foster, who he falls in love with. Thor also is one of the founders and members of Avengers. In the eventually gives up Mjolnir when Jane Foster becomes worthy to wield it, after which he reverts to being a superhero under the name Odinson.

Thor’s exact age is never revealed, but in one comic issue, he recalls witnessing a part of the Earth’s Stone Age – a period which lasted 3.4 million years – but doesn’t mention an exact year of his visit. As such, we are left to guess how old the god is. Thor retains immortality by eating the Golden Apples of Idunn.

An extraterrestrial from Mars, J’onn J’onzz – later known as the Martian Manhunter – found himself on Earth when he was pulled there by an teleportation beam during an experiment conducted by Dr. Saul Erdel.

The shock from the experiment’s results led to the scientist’s death. This left J’onn alone with no way of returning home until the technology of Mars advanced enough to send him back, so he decided to spend his time on Earth fighting crime.

J’onn took on the persona of John Jones, a detective practicing in Middletown, America. He did eventually reveal his true self to the world and operated as a superhero, with John Jones the detective remaining as his secret identity. He was one of the original members of the Justice League.

The Martian Manhunter’s solo series was discontinued in 1968, and he officially was brought home to Mars to be the ruler of New Mars shortly after. He continues to appear in other comics now and then.