But where did video games come from, and what did the earliest games look like? If you’re wondering, let’s begin by saying that they were nothing like the high-tech, sophisticated worlds that players navigate today through a high-def screen. They also couldn’t be accessed from the privacy of a player’s home. Rather, a person would go to their local arcade for their game fix, which would have offered not only video games, but other (more hands-on) options.

Stay right here as we take a trip down memory lane to explore eight of the oldest arcade games. 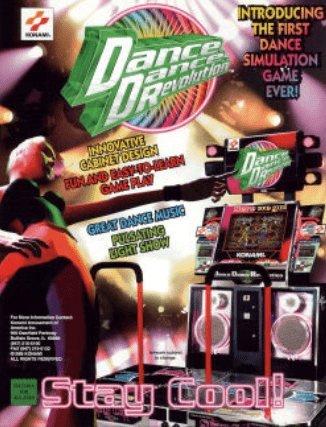 Dance Dance Revolution was one of the first video arcade games of its kind, defined as a “music video game.” It required dancing and rhythm from players, and was initially made exclusively for arcades before it was adapted for the home Play Station system.

The earliest arcade version of Dance Dance Revolution featured a platform where players would stand to perform dance moves—designed with arrows—known as a “step pad.” Players could select from different levels: easy, normal or hard, as well as select the song of their choice. The objective of the game is for players to move their feet in a particular pattern on the step pad, in sync with the arrows onscreen.

Since its birth in 1998 as an arcade game, Dance Dance Revolution now has many versions for home game systems. The latest was developed in July, 2020.

When the video game first gained traction, there were machines everywhere—including in New York City’s Port Authority Bus Terminal! Today, just two of the original Dance Dance Revolution arcade machines remain, which are based in a Manhattan arcade; nevertheless, they enjoy a devoted following to this day. 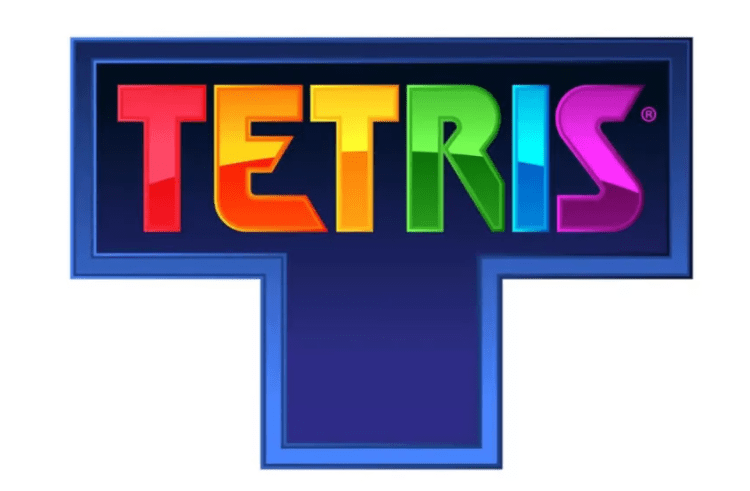 The popular Tetris arcade game celebrated its 35th birthday just two years ago. While it’s still a popular game that’s commonly played today on cell phones, it got its start back in ’84 as an electronic puzzle.

Created by Russian software engineer Alexey Pajitnov, the goal of Tetris is for players to fill in each line with new shapes that fit in the empty spaces. Completed lines disappear, and the player earns points for each line that is successfully filled in. The shapes which a player uses throughout the game are called tetrominoes. The game is won by completing each line successfully until the entire screen is filled in, up to the very top.

Tetris is one of the great early video games, and is still popular in today’s shifting landscape of new games and game systems.

The creator of Tetris, Alexey Pajitnov, was a computer programmer, and was inspired by his favorite puzzle board game, Pentominos. He named Tetris after a combination of words: “tetra” (the Greek word for “four”) and “tennis,” the inventor’s favorite sport. 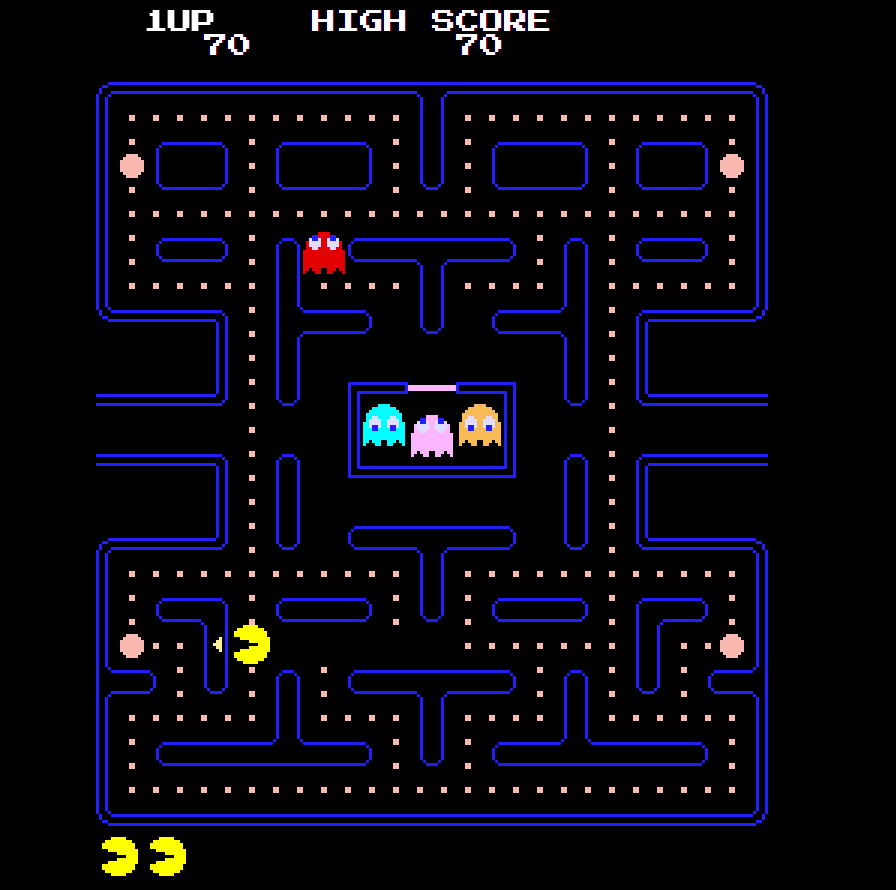 The thing about Pac-Man? It never really goes out of style.

First created in 1980, the game was an instant success, and is now almost a type of 80s icon. Originating in Japan, the game was quickly released to the United States, and by the following year, Americans were playing 250 million games of Pac-Man weekly on just 100,000 Pac-Man machines.

The concept of the game is simple: the player navigates the Pac-Man (little yellow munching character) through a maze, consuming rows of dots while avoiding four “hunting ghosts,” or “monsters.” If the Pac-Man is caught by the hunting ghost, the player loses one of three lives. The game ends when Pac-Man loses all of his lives.

To this day, Google celebrates the birthday of Pac-Man each May 21 by putting a playable version of Pac-Man on their homepage. The search engine reworks the maze on that day each year so that it spells out the word “Google.” 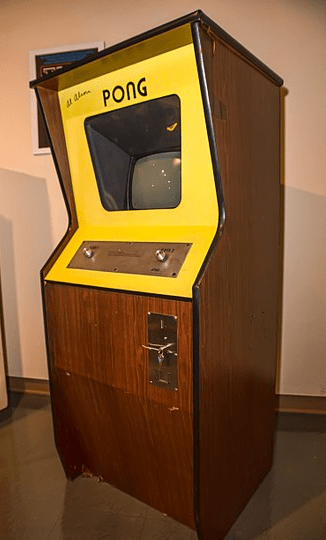 Developed by three video game inventors—Bushnell, Dabney, and Alcorn—Pong (short for Ping Pong) was a type of remake of its popular 1950s predecessor, Tennis for Two. Unlike Tennis for Two, Pong was sold for widespread distribution, and the result was staggering.

At the height of the game’s popularity, its production company, Atari, found that it could not keep up with the demand for Pong. It was grossing around $40 per day, which was a huge amount at the time, and the company sold 4,000 units by 1974. So great was the public response that a home adaptation was created—called Home Pong—which Sears sold exclusively in winter, 1975. Home Pong sold more than 15,000 units during that season alone.

The game of Pong had one simple premise: avoid missing the ball, just as a player would in real-world table tennis. Despite, and perhaps even because of, the simplicity of the game, its popularity soared.

An original version of a Pong machine is housed in the permanent collections of the Smithsonian Museum in Washington, D.C., due the game’s significant cultural impact in the U.S. during its time. 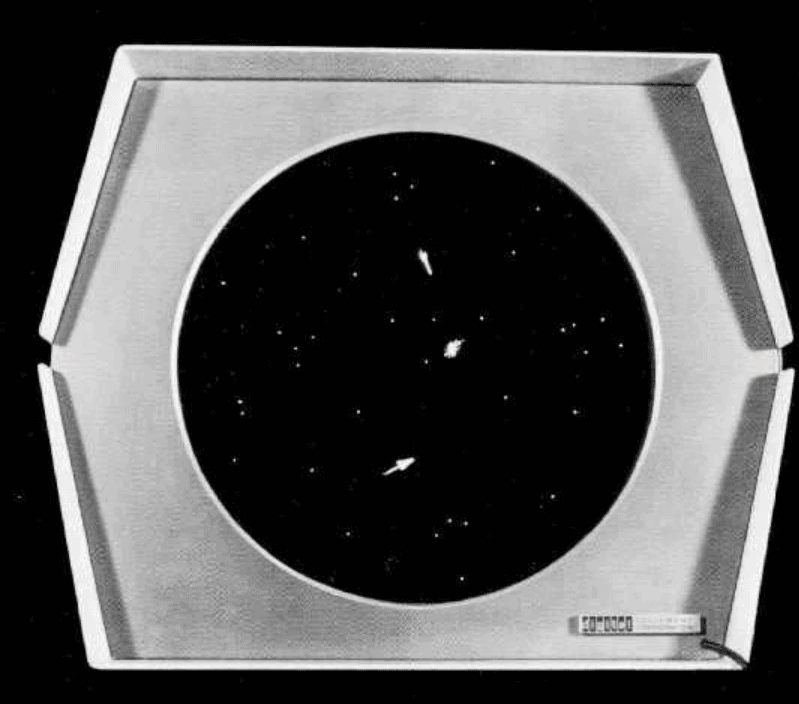 The SpaceWar! video game was developed in 1962 by Steven Russell, and was designed as a space combat/action game. Originally created for the Massachusetts Institute of Technology community, it was circulated by students and faculty members to a wider audience, and gained popularity as an arcade game.

The SpaceWar! game is played with two spaceships which attempt to shoot one another in space, each controlled by a player. They have a limited amount of fuel and a limited amount of artillery, which if they deplete means sudden death. Players could maneuver their spaceships by rotating clockwise, counterclockwise, and moving forward, as well as perform actions such as firing torpedoes.

The first ever video game tournament, held in Los Altos, California in1972, featured the SpaceWar! game. Pong would emerge on the video game scene just six weeks later, presumably inspired by the events of the tournament. 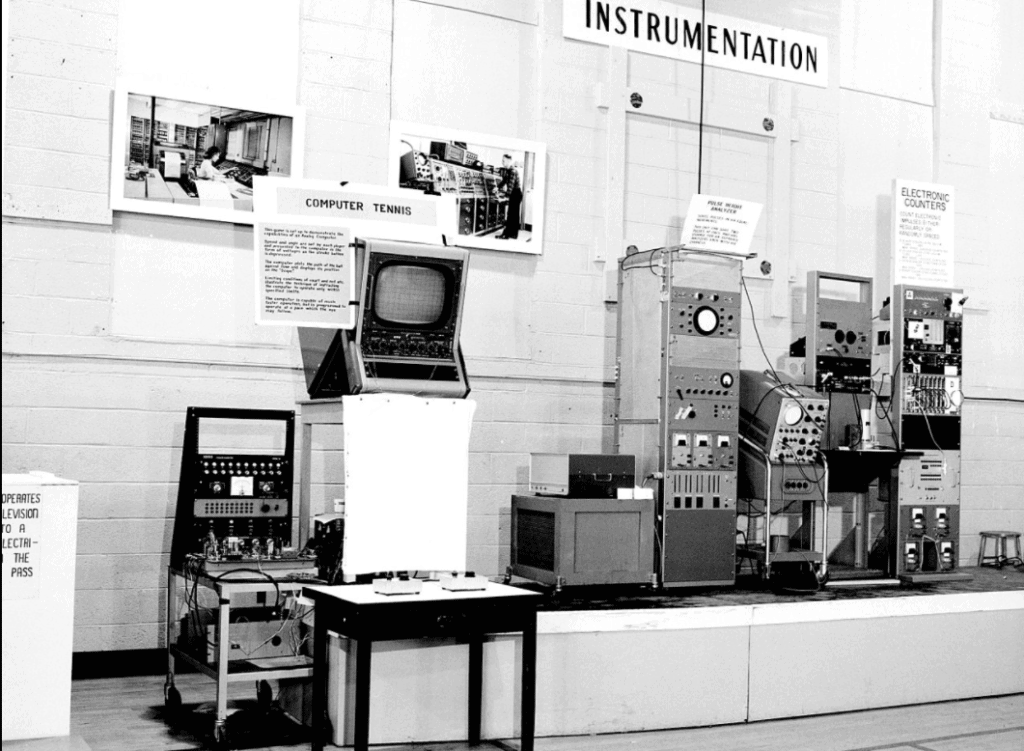 Tennis for Two was the first ever video game to be invented. Also called Computer Tennis, the game was developed by inventor and physicist, William Higinbotham.

Though at the time that Higinbotham created Tennis for Two, there was no true modern arcade (as we think of them today), people lined up at the Brookhaven National Laboratory for a turn at Tennis for Two. To play the game, two players used separate controllers equipped with buttons and dials to control their serve, and these controllers were hooked up to one computer.

The whole idea of Tennis for Two was for people to perform the same functions—electronically—that they would in playing table tennis. The invention was the dawning of a video game era.

William Higinbotham was head of the electronics division for the Manhattan Project during World War II. He was a nuclear physicist who supported nuclear nonproliferation, and was the First Chair of the Federation of American Scientists. 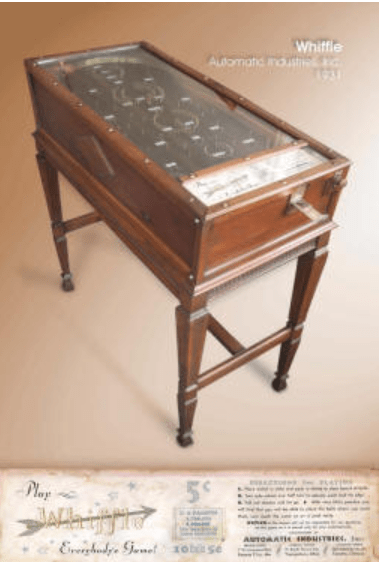 The original pinball machine, invented in 1931, was initially called “Whiffle Board.” Supposedly, the term “pinball” came from the idea that these contraptions contained numerous holes and pins in their infrastructure.

The earliest pinball design looked a lot like a living room end table, unlike the more modern (now retro) design of the steel machine we’re familiar with today. There are many moving parts to pinball, many of which have their own names: the plunger, the ramp, the bumper, paths, flippers. Several of these parts were added onto the machine in later years.

A player’s primary goal when playing pinball is to hit as many targets as possible with flippers, which act as the driving force of the ball. The more targets a player hits, the more points they earn.

When pinball was first invented, they were controversial because they were considered to be “games of chance.” This rendered them no better than gambling, which was highly illicit in the 1930s. Some venues in New York even banned pinball machines because of their perceived association with gambling and crime. 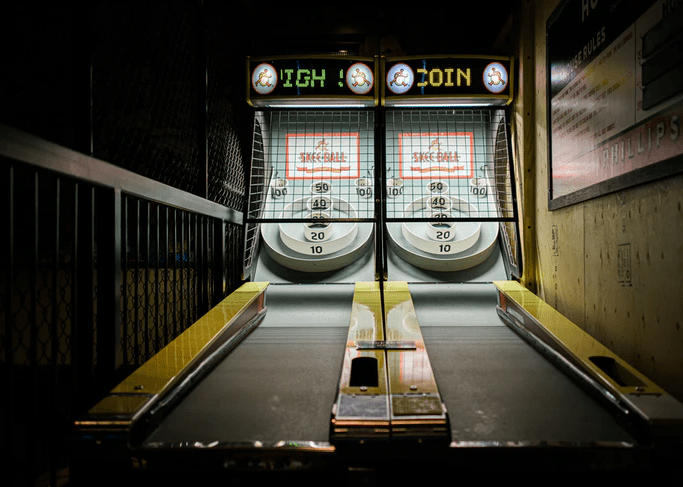 Skee-Ball is the oldest ever arcade game. Dating as far back as the early 1900s, the idea for the game was patented by Joseph Fourestier Simpson of New Jersey. It was advertised initially by Billboard magazine in 1909, leading to the game’s first ever sale. Afterward, Skee-Ball’s popularity gradually but steadily grew, expanding to five thousand arcade alleys by the year 1936.

Resembling something of a combination between bowling and basketball, Skee-Ball players aim for one of several rings with holes by pitching a ball down an alley toward a set of rings. The goal is to get the ball in one of the top two rings, which are each worth 100 points, or one of the middle rings, which earn more points for a player than the lower ones.

Skee-Ball is still widely played today wherever most arcades are located—it is not only iconic, but an arcade staple.

Skee-Ball is now also a North American social “sport” in addition to an arcade game, and can be found in many bars across America. There are even Skee-Ball leagues for adults who love the game!

Posted by Shasha Neil 0
Spread the loveYouTube is the most popular video sharing website in the world and the second most popular website, period.…

Posted by Victor Eaton 0
Spread the loveThe oldest movie theaters in the world fight for the title. Many even claim to be older than…

Posted by Shasha Neil 0
Spread the loveThere’s probably no single film franchise that has captured the world’s attention and imagination like Star Wars. And… 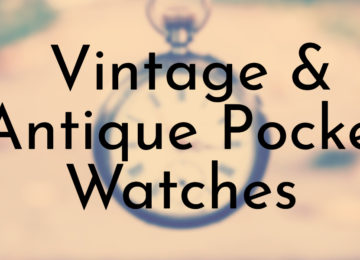 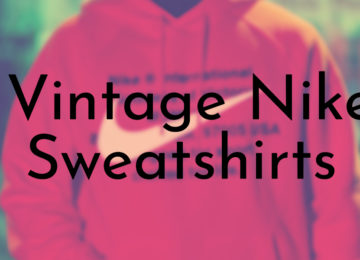