These days, we certainly take photos for granted. In fact, thanks to smart phones, most of us take several photos a day!

Many years ago, it was certainly not as easy to take photos as it is, today. Both photographers and subjects would have to sit, or stand, in the same pose until the photo was finished. This was around 15 minutes by the late 1800s, but the first photo took a whopping eight hours! Take a look at this photo, and more, by gazing upon the oldest photographs of all time: 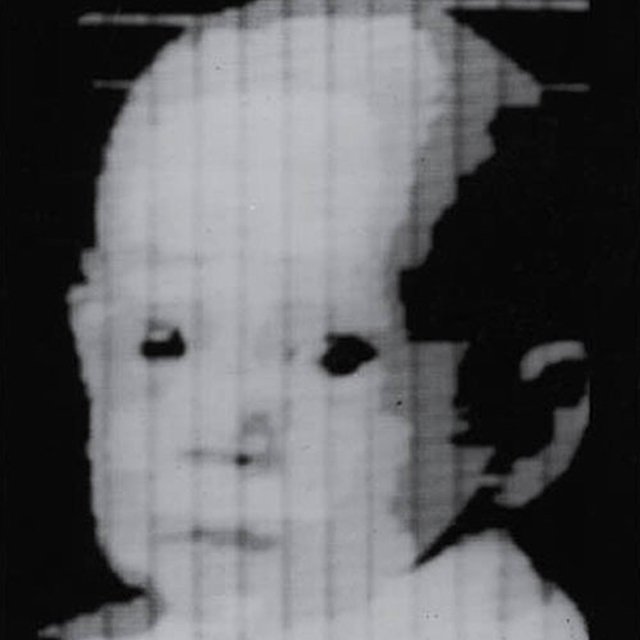 Before getting to the oldest photograph ever, we have some pretty exciting old photos to show you first. Almost every photo we take today is digital, but that wasn’t always the case. It wasn’t until the past couple of decades, or so, that digital photos became really mainstream, but the first digital photo was created in 1957.

This photo, which is of the photographer’s baby boy, was scanned by a crude drum scanner created by Russell Kirsch. He was a scientist and interested in the possibility that computers could “see” like we do. What he ended up creating was the first digital photo. It would be 20 years before the first digital camera would be built. 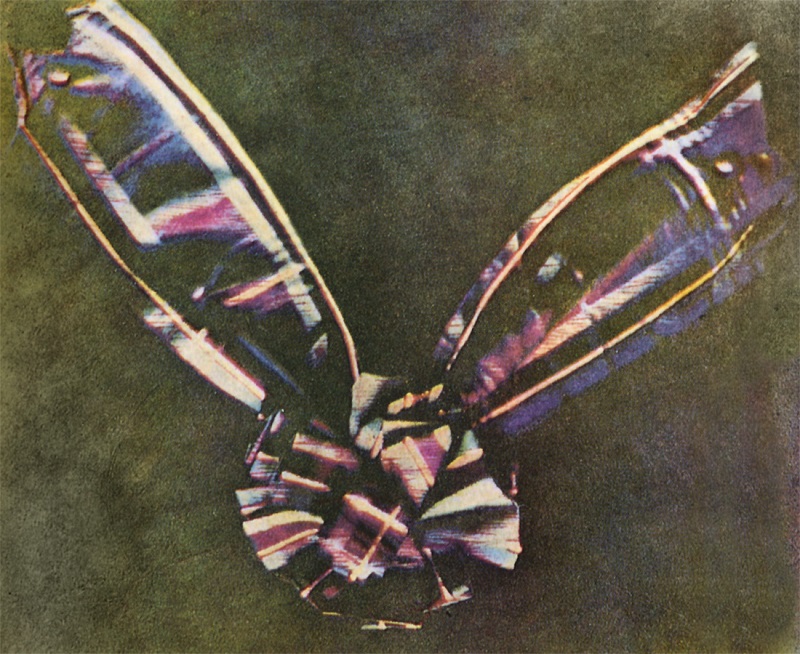 The oldest color photo was taken in 1861. It is credited to James Clark Maxwell, a Scottish scientist, but the shutter button on the camera was pressed by Thomas Sutton. He was the inventor of the SLR camera, or single-lens reflex camera.

This photo, which is of a bow created from a ribbon of tartan, was actually three different photographs taken through yellow, blue, and red filters. Maxwell then combined the images into one photo. Technically, you might find mention of colored photos thatare older than this, but those photos are actually black and white and then hand painted to create the illusion of a colored photograph. 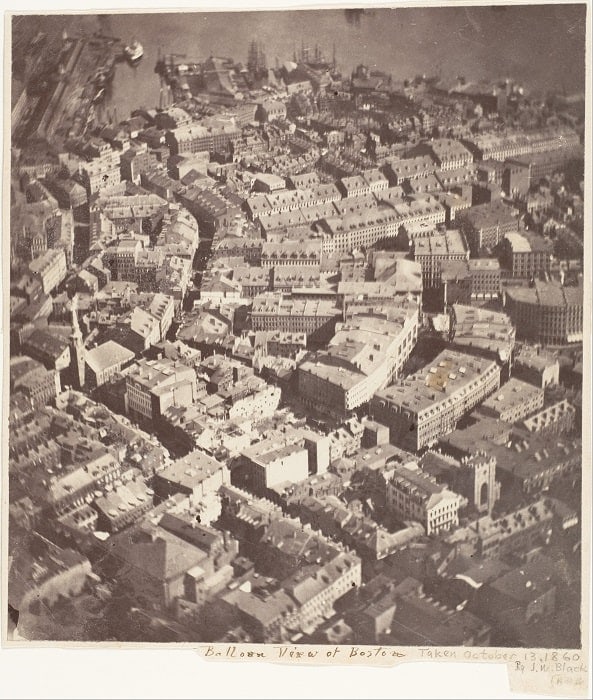 Today, thanks to drones, we see a lot of aerial photographs. This was much more difficult in years past, and almost impossible in the mid to late 1800s. James Wallace Black, however, found a way to do it. He took the photo from a hot air balloon over Boston.

As you can see, this photo is a gorgeous example of early photography, and it was taken from an altitude of about 2,000 feet above the city. The official name of this photo is “Boston, as the Eagle and the Wild Goose See It.” Though this photo was the first, James Wallace Black has another aerial photo of Boston that he took later. That one is called “Boston from a Hot-Air Balloon.” 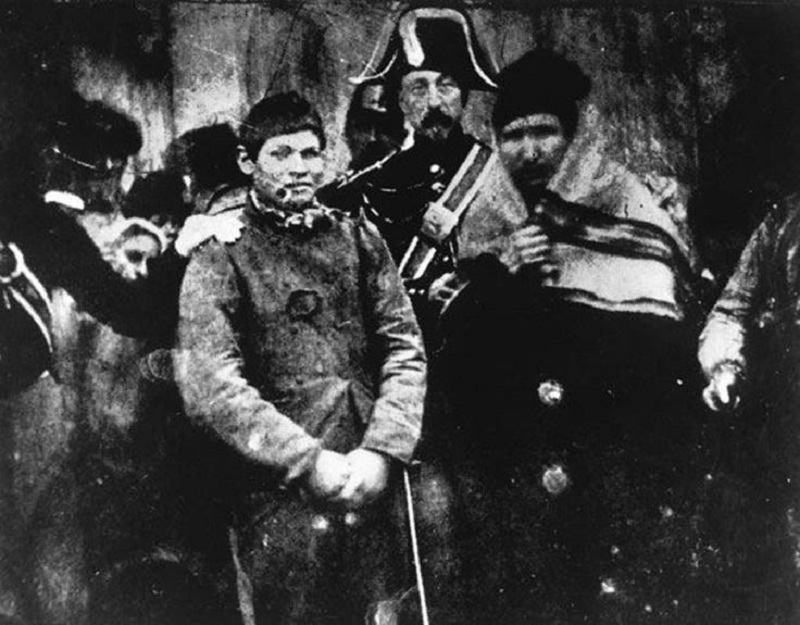 We don’t know who took this photo, and we don’t know who this man is. What we do know, however, is that this is the oldest news photograph known. It is, as you can see, of a man getting arrested, and it was taken in France.

Since we don’t know who this man is, we can’t tell you what he did to find himself in this predicament. But, he seems pretty defiant and proud of his work. Though none of the men in this photo knew how significant that moment was going to be, it changed how news was delivered to the masses. 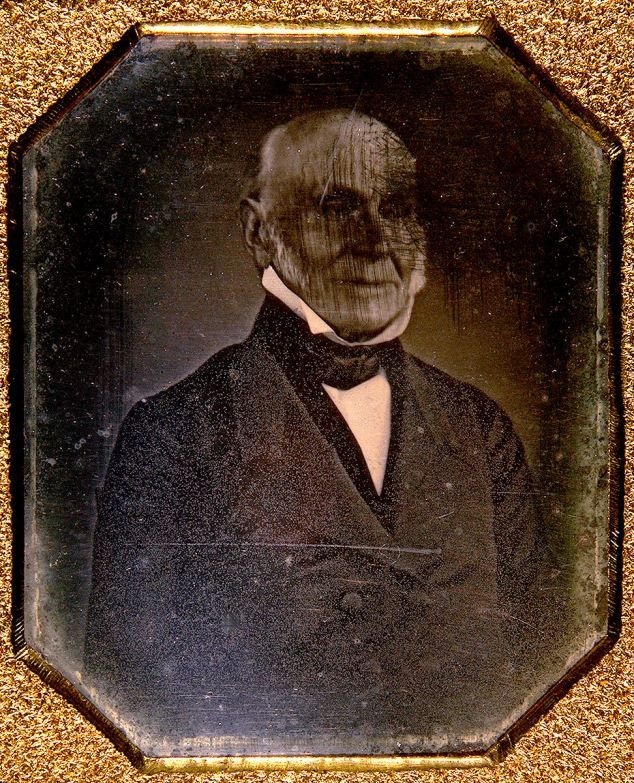 Every President of the United States gets an official portrait. No president, from George Washington to James Monroe, was ever photographed, but once John Quincy Adams came around, photography became a possibility.

What’s so interesting about this photograph is that it was taken after Adams had already left the office. John Tyler was the sitting president when the photo of Adams was done, and Tyler was only painted, not photographed. The first president photographed while in office was James K. Polk, who was elected after Tyler. Today, this photo is housed in The Smithsonian. What did Adams think of his photograph? He said it was “hideous,” and “true to the original.” 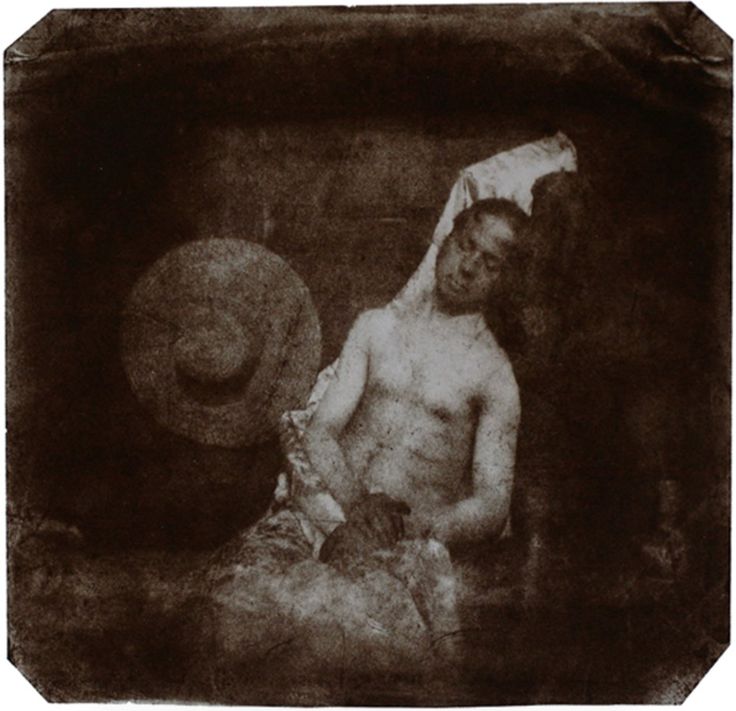 To understand why this photo was created, you have to understand the rules of rivalries. Back in the mid 1800s, when photography was really taking off, there were two men fighting for the title of “Father of Photography.” These men were Hippolyte Bayard and Louis Daguerre, who you can read about later on in this list.

Bayard and Daguerre were working on creating a new photograph development process. They were fierce rivals, and though it’s said that Bayard actually created his process first, he failed to report it to the French Academy of Sciences. Daguerre, however, did not fail to do this, so he got the title. In response, Bayard wanted to show that he had committed suicide due to the sadness and anger of losing out to Daguerre. The picture, however, was a total fake. 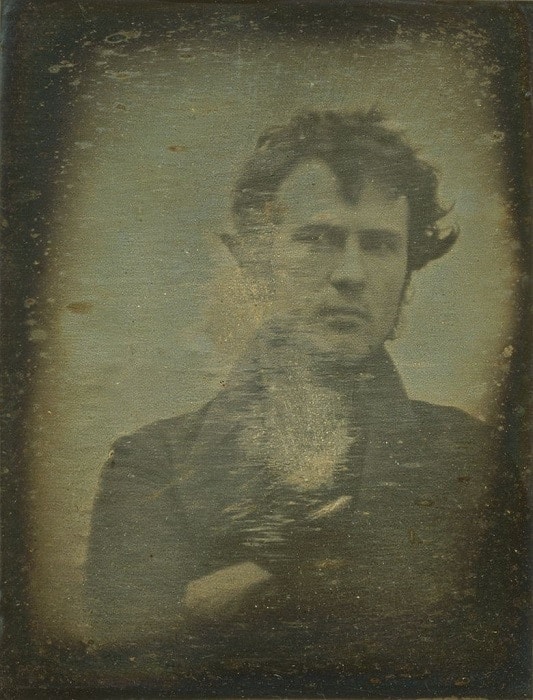 When is the last time you took a selfie? You might think that selfies are a modern invention, but that’s far from the truth. The first selfie was actually taken in 1839 by Robert Cornelius, an amateur photographer and lamp maker.

Since cameras were quite large in the 1800s, you are probably wondering how Robert set up his selfie. Here’s the answer: he placed the camera in the back of his family’s Philadelphia shop, and then opened the lens cap. He then ran in front of the lens and sat there for a full minute before running back out of the frame. The result? The world’s oldest selfie photograph.

3. The Oldest Photo Taken in the United States 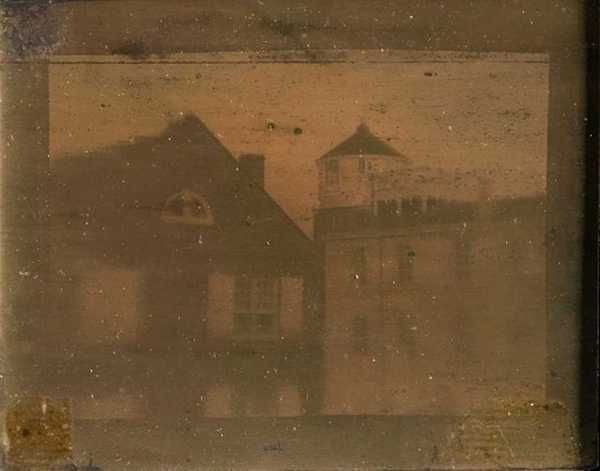 Here, you see the oldest photo of Philadelphia, and also the oldest existing photograph taken in the United States. This photo was taken by Joseph Saxton, who was an inventor and amateur photographer. He was from Philadelphia, and made a great impact in the world of photography. In fact, there is still a gallery that honors his work, as well as the work of others, in Canton, Ohio.

This photograph is of Central High School, which sat on the corner of Juniper and Walnut streets. This photograph reportedly took 10 full minutes to take, which is why you likely don’t see any people in it.

2. The Oldest Photo of a Human 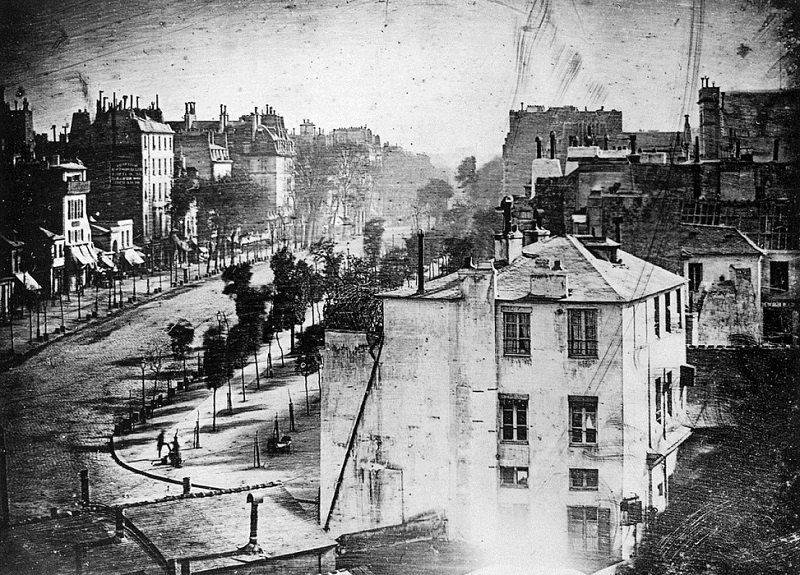 At first glance, this photo looks like a Paris city street, but it’s actually the oldest photo of a human. If you look at the lower left-hand corner, you can see a man. He was standing still and getting his shoes shined, and that’s the only reason the camera could capture him. At the time, it took about 10 minutes of constant exposure to capture something on film.

Previous to this photo, since one had to remain still while a photo was taken, a camera had not yet captured a person. At this point, only other subjects were shot by cameras. This photo was an accident, too. The photographer, Louis Daguerre, who is credited for creating the daguerreotype style of photography, was simply taking a photo of the street. 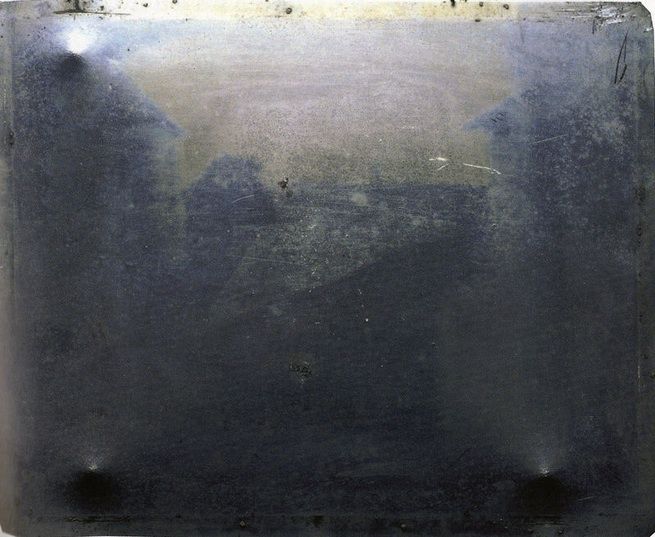 Here we have the oldest known photograph in existence. It was taken by Joseph Nicéphore Niépce in 1826. He captured the scene using a type of photography known as heliography. This is when a piece of metal or glass is coated with Bitumen of Judea. When the light hit the Bitumen, it would harden, creating the image.

In the case of this photo, Joseph Nicéphore Niépce allowed it to remain exposed for an astounding eight hours. Though it doesn’t look like much, and it’s difficult to see, the first photograph ever is displayed at the Harry Ransom Center at the University of Texas at Austin.