Newspapers have been a way for the world to be connected to and keep up to date on current events all around the globe. Though today mobile phone applications and websites often come close to replacing the newspaper, printed news is still published daily, and we have our ancestors to thank for that. Here’s a list of the 10 oldest newspapers ever published! 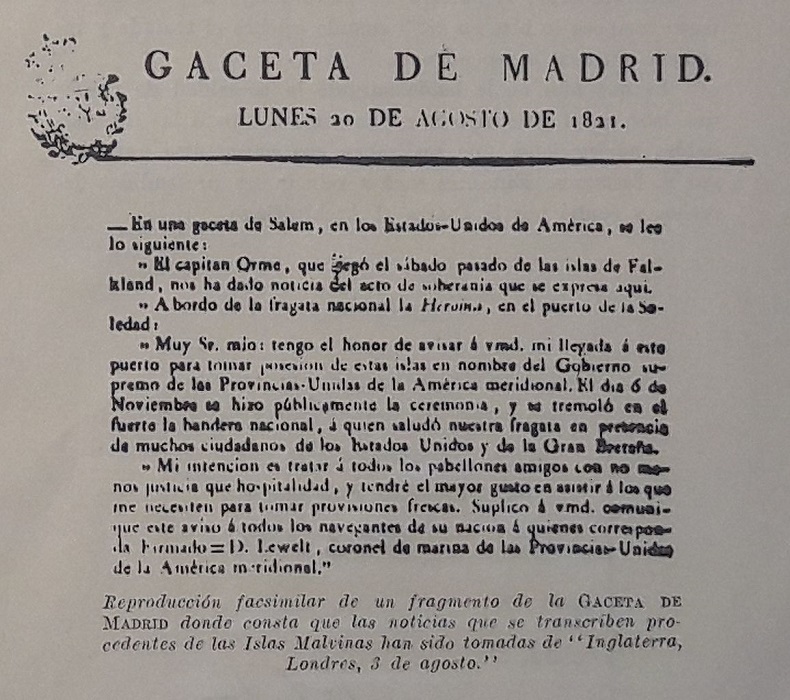 Beginning 1936, La Gaceta de Madrid was renamed to the Boletín Oficial del Estado, or BOE for short, and is the official state gazette of the Government of Spain. The newspaper is published daily, except for on Sundays, and mainly publishes decrees, laws, regulations, orders, and other acts as per Article 9.3 of the Spanish Constitution of 1978.

The BOE is also the official journal of the Kingdom of Spain and is authorized and published by Royal Assent and also receives approval from the Spanish Presidency Office before each publication. As of 2009, the newspaper is online only. 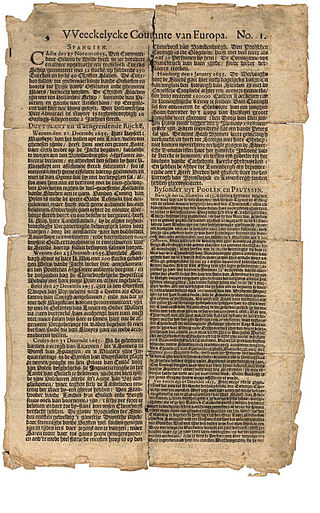 Translating to “Weekly Newspaper of Europe”, the Courante was published by a husband and wife, the latter who received the rights to continue its publication after her husband’s passing. In 1664, the government aimed to protect the format of the newspaper, and its name was changed to De Oprechte Haerlemse Courant.

The Courante paved the way for English newspapers, with the Windsor coffee house advertising translated versions of the newspaper following the receiving of the post in the morning.

The paper merged with the Haarlems Dagblad in 1942. It continues to be known as such till today and is still published, and claims to be the newspaper with the longest publication history. 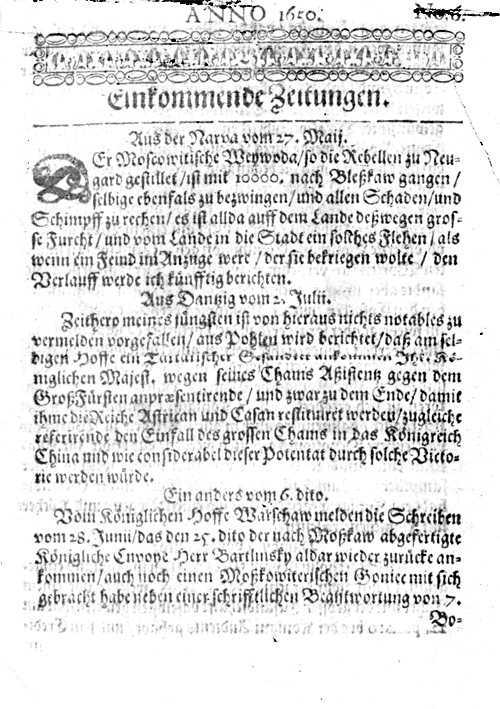 The Einkommende Zeitungen, which roughly translates to “incoming newspapers”, was the very first daily newspaper to ever be published in the world.

Sadly, not much is known about this newspaper other than its legacy as the first of its kind. It was founded on the 1st of July in 1650 and was published in Leipzig, Germany. 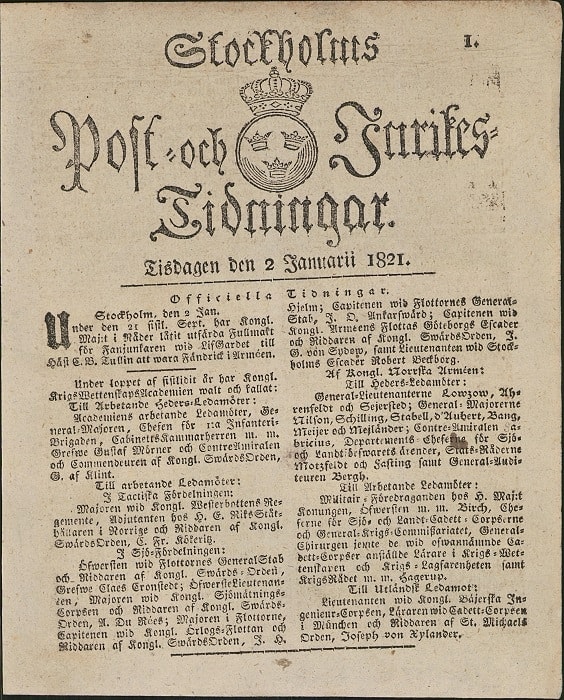 Known also as PoIT —which translates to “Post and Domestic Times” — this newspaper is the government gazette and paper of the country of Sweden. It is the oldest newspaper that is still in publication till today, though it switched to an online only publication in 2007.

Despite being an online newspaper only now, four copies of each issue continue to be printed for storage and archiving in the National Library of Sweden, Swedish Companies Registration Office, and Lund University library. 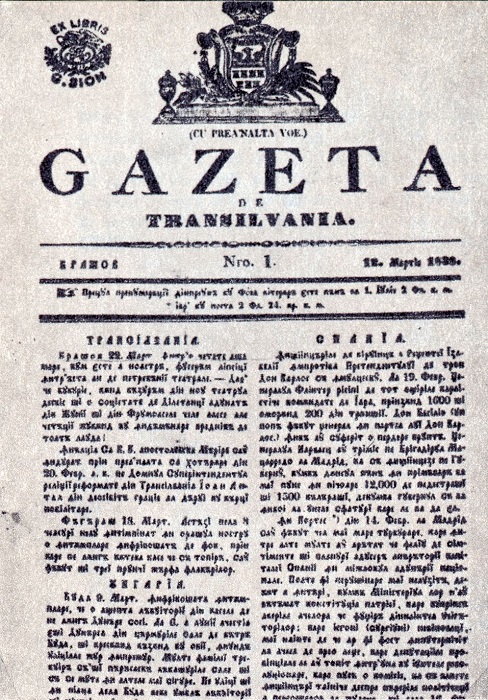 The Gazeta is a unique entry on this list because not much is known about it, and it barely meets the definition of a newspaper due to its short-lived nature. It was the first Catalan newspaper and the first periodical magazine in the Iberian Peninsula.

The Gazeta did not have a long lifespan, only having two published issues before ceasing all publications. 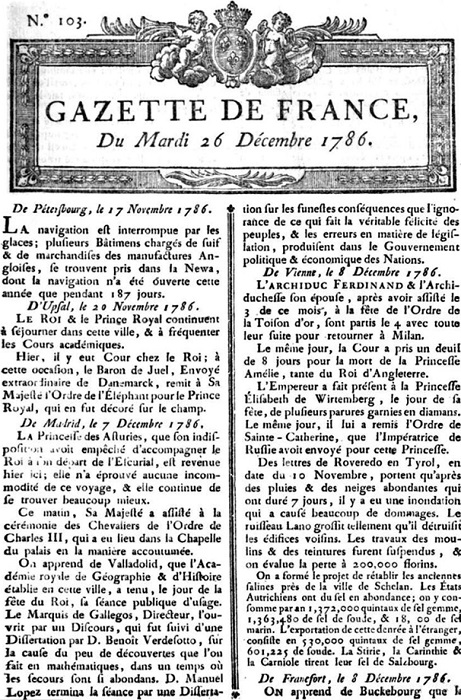 Not only was La Gazette the first French newspaper, it was also the first weekly magazine published in France. It quickly rose to being widely read, making it a useful tool for controlling the information facilitated to the public, especially in such a centralized state.

The paper soon became a mouthpiece of the Legitimists, a Royalist faction, and saw regular contributions from high profile individuals like Cardinal Richelieu and Louis XIII. Its readers were mainly the elite upper class until the revolution.

La Gazette focused on political news, and in 1762, became known as the Gazette de France, subtitled “Organe officiel du Government royal”, which translates to “Official organ of the royal Government”. The newspaper lasted an impressive amount of time before closing publications in 1915 due to the modernization of news media.

Translated as the Antwerp Gazette, there was no actual name for this newspaper, which was the first Flemish newspaper to ever be published. The name we’re using is the name it was given by cataloguers.

The news featured in the Antwerp Gazette was sourced from Western and Central Europe and covered a wide variety of general news, often including satirical columns, prayers, celebrity news, and ever songs and verses. Each paper carried at least one woodcut illustration.

The paper was officially licensed by authorities and was very politically biased, leaning pro-Habsburg and having a Catholic perspective. 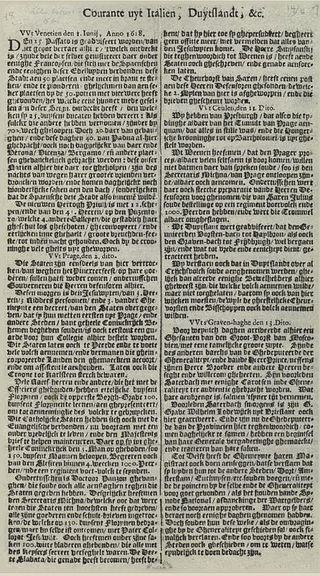 The Courante was the first ever Dutch newspaper, and also considered the world’s first broadsheet newspaper, being the earliest to be published in folio instead of quarto size. The paper, whose title translates to “Current events from Italy, Germany, etc”, featured news stories from Venice, Cologne and Prague.

The Courante was published weekly. No official date could be found on the paper, nor official information about its printer or publisher, but due to the content of its pages, it’s estimated that the newspaper was published between the 14th and 18th of June 1618. The paper ceased operations in 1664. 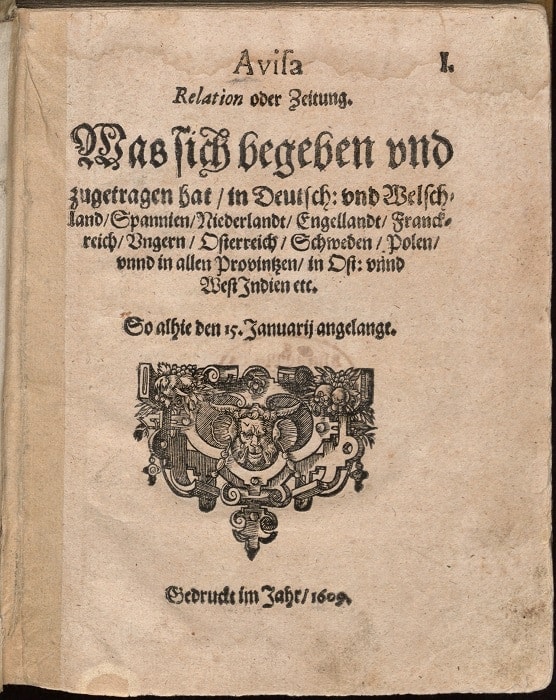 The Avisa was the first known new periodical ever published. In its very first issue, its pages contained news stories from numerous countries all around the world.

That issue said all news within it was obtained up till the date of January 15 1609. As such, most experts date the first published issue of the Avisa to January 15, though there is no official date of publication on the issue.

There are some authors that consider the Avisa to be the world’s first newspaper. However, newer research dated from the 1980s up to 2005 would suggest that another publication preceded it.

Relation aller Fürnemmen und gedenckwürdigen Historien is officially recognized as the world’s oldest newspaper to have ever been printed. The newspaper was first published in 1605.

This honor is not only given to the Relation by multiple authors, but by the World Association of Newspapers as well.

In English, the Relation’s name translates to “Account of all distinguished and commemorable news”. Originally, the paper was thought to have been first published in 1609, but the discovery of the Carolus petition — found in the 1980s in the Strasbourg Municipal Archive — sets that date to 1605.

6 Oldest Bookstores in the World
10 Oldest Advertisements Ever Created
10 Oldest Companies in America
10 Largest Newspapers in the U.S.