No matter when or where in the world, finding pottery is virtually guaranteed. Ancient civilizations utilized clay and ceramic work to create plates and utensils for eating, vessels for storage and transportation, figures for burial, pots for rituals, and so much more. While design techniques and strategies differed among civilizations, most pottery work still relied on a simple sculpt and fire process that remains in use today. Read the list below to discover the rich cultural value and history associated with each peoples’ pottery work. 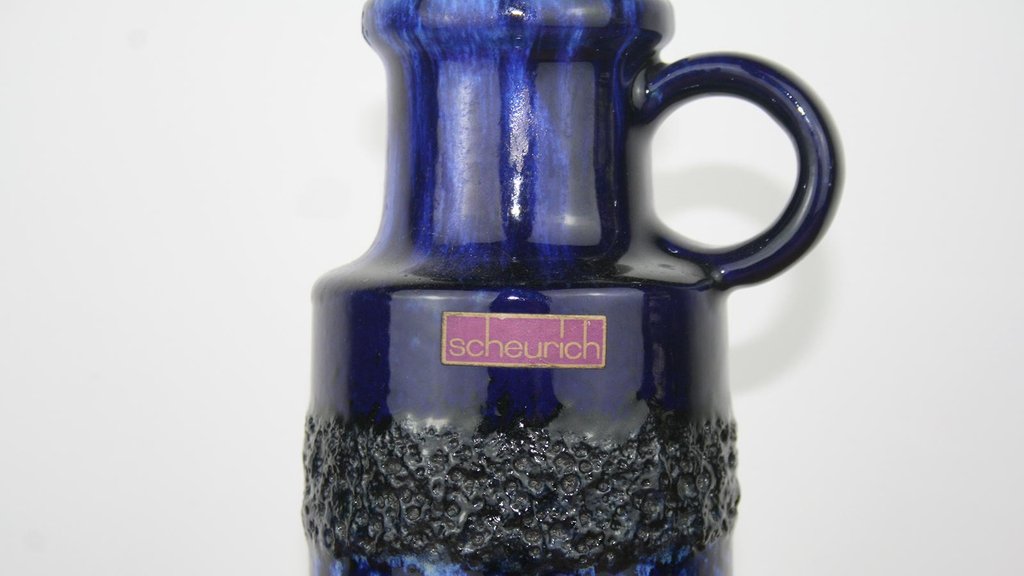 After reviewing ancient pottery practices, it might seem odd to learn about pottery from the mid to late 20th century. West German pottery plays a large role in the art form and, technically, comes from a country that no longer exists. West German pottery resulted from a “golden era” in the craft that was defined by experimentation and creativity. As a result, West German pottery can’t be defined as one thing but, overall, most work from this time and place shared notable characteristics. It often had a “fat lava glaze,” which made the pottery appear more tactile, as well as avant garde handle shapes and bright colors. 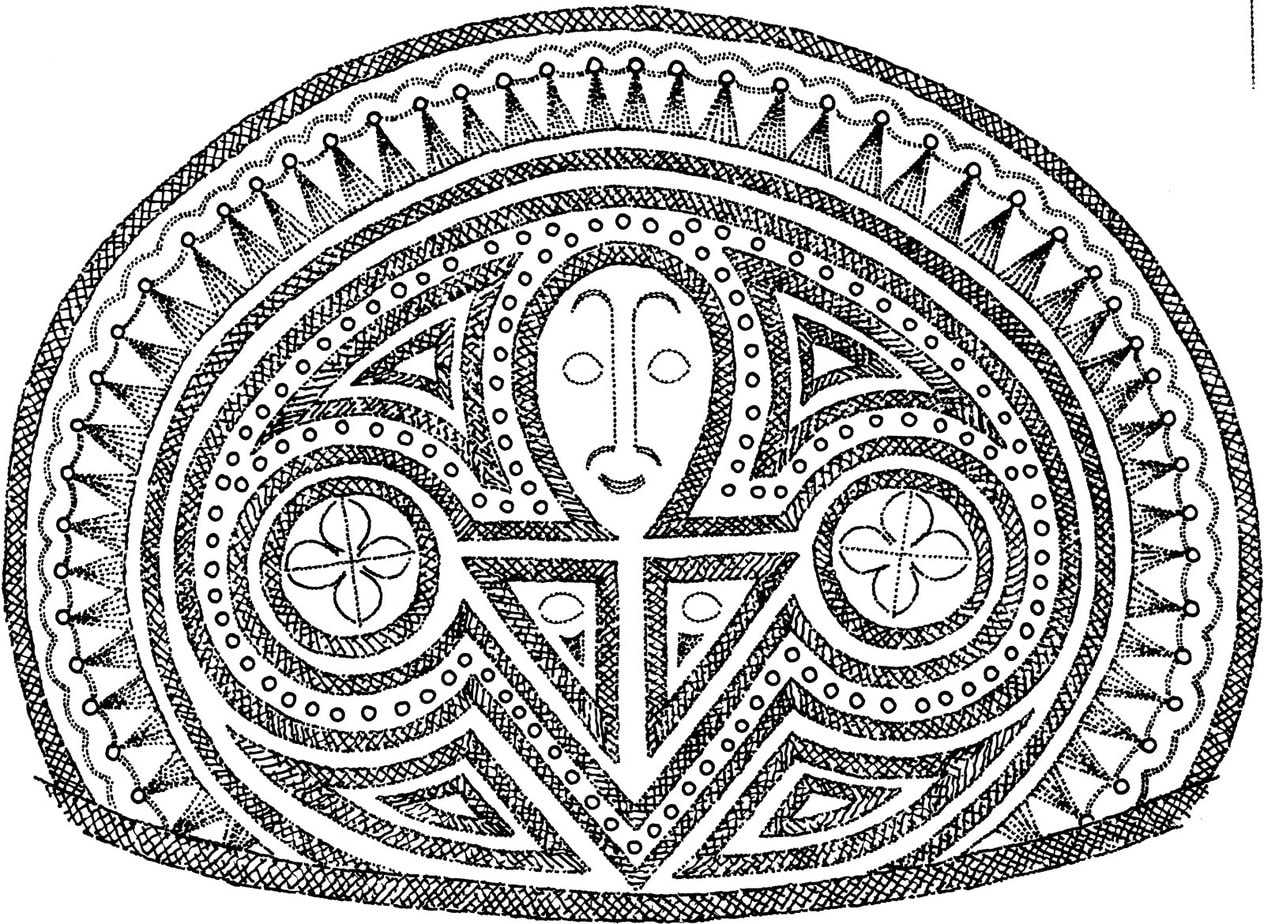 Historians believe the Lapita people originated from Southeast Asia and then made their way to places like Polynesia and Micronesia thousands of years ago. Ceramics was a strong suit of Lapita artists. Their work usually featured geometric patterns or anthropomorphic creatures etched into the pottery with a comb like stamp before firing. Most Lapita pottery consists of ceramics, but archaeologists have also discovered sculptures with animal features. 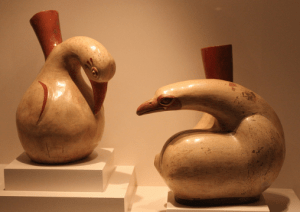 The Moche people, a pre-Incan civilization, generated mass amounts of red, black or white pottery in different sizes through specially designed molds. The Moche didn’t depict people through their pottery, unlike other ancient civilizations, but often animals or anthropomorphic creatures. The Inca people carried on this tradition, preferring geometric designs and animal shapes to the human form. The Moche also incorporated realism in their pottery designs, adding in facial expressions. The Inca did not do the same. The pottery probably served a number of practical and/or ceremonial purposes. 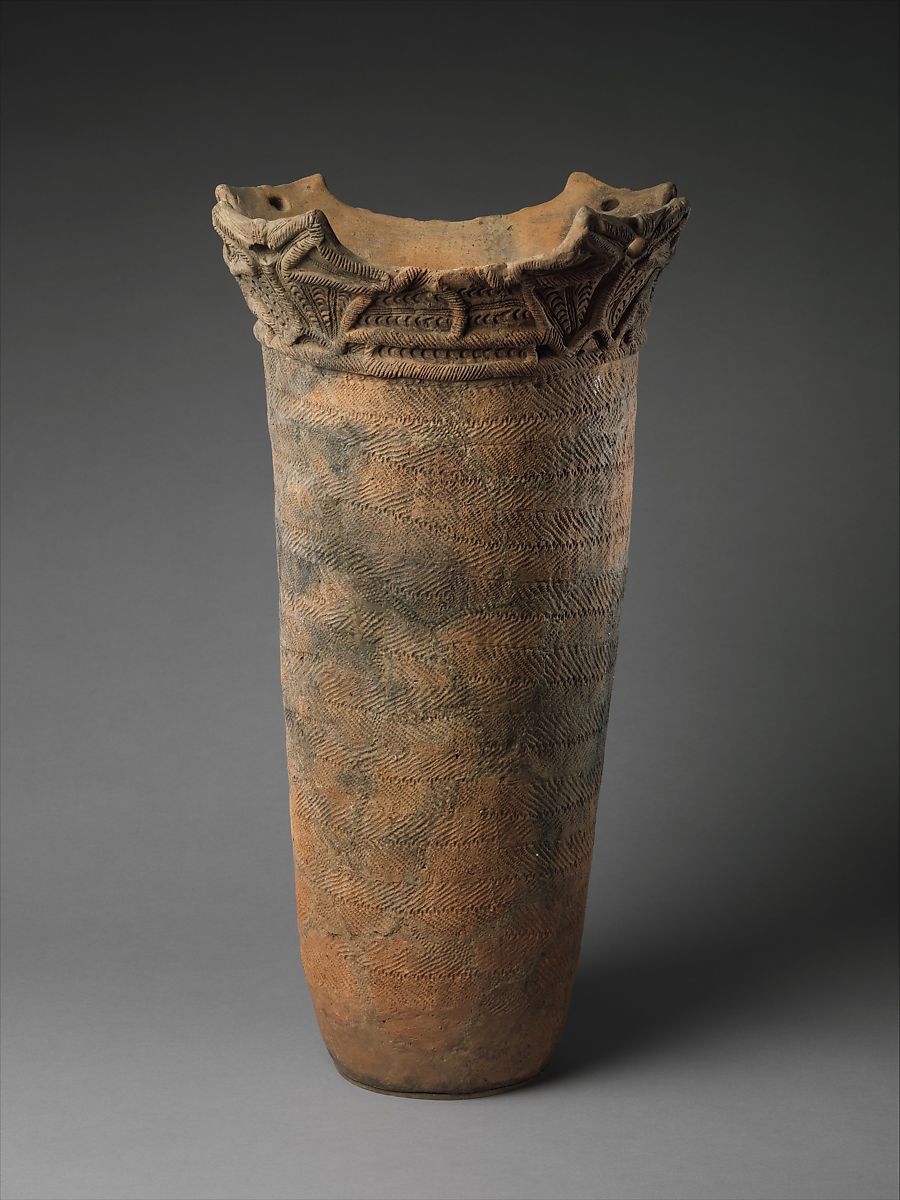 Jomon pottery is some of the oldest known to date and encapsulates six objects in the particular Jomon style, all in the form of bowls or other vessels. The fukabachi, deep bowls and jars with a wide mouth, is the most common example of Jomon pottery. In general, the Jomon style featured a sort of cord pattern decoration (“jomon” means “rope”) and not much else. Historians believe potters did not officially train in their craft, but did it in addition to other jobs. Pottery was most likely fired over open flame, as opposed to a kiln, and used to store and carry goods. 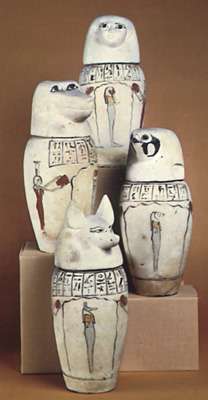 The canopic jar was a funerary vessel used in Egyptian burial practices to store the heart, brain, and other significant body parts in death. Early iterations of these clay jars were quite plain, but later civilizations designed the lids to feature the heads of gods. And, as the practice changed to leave the innards within the mummy, fake jars were created. They looked like regular canopic jars, but had no inside in which to store anything. In general, Egyptian pottery was made with a wheel and left in the desert sun to dry. 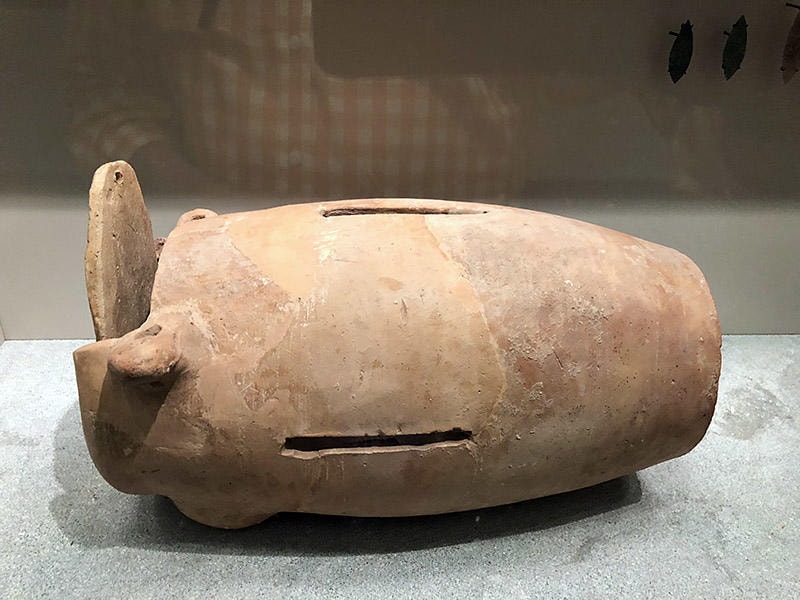 The whole of India and surrounding countries features a broad range of ancient pottery traditions. Pottery from the Indus River Valley civilization is credited with introducing pottery techniques to the rest of the country. There is evidence of both handmade and wheel created pottery depending on the ancient society. The terracotta mousetrap is a surprising contribution and shows the ingenuity of ancient peoples as craftsmen and realists. The small trap featured a door that dropped down once the offending creature was inside. 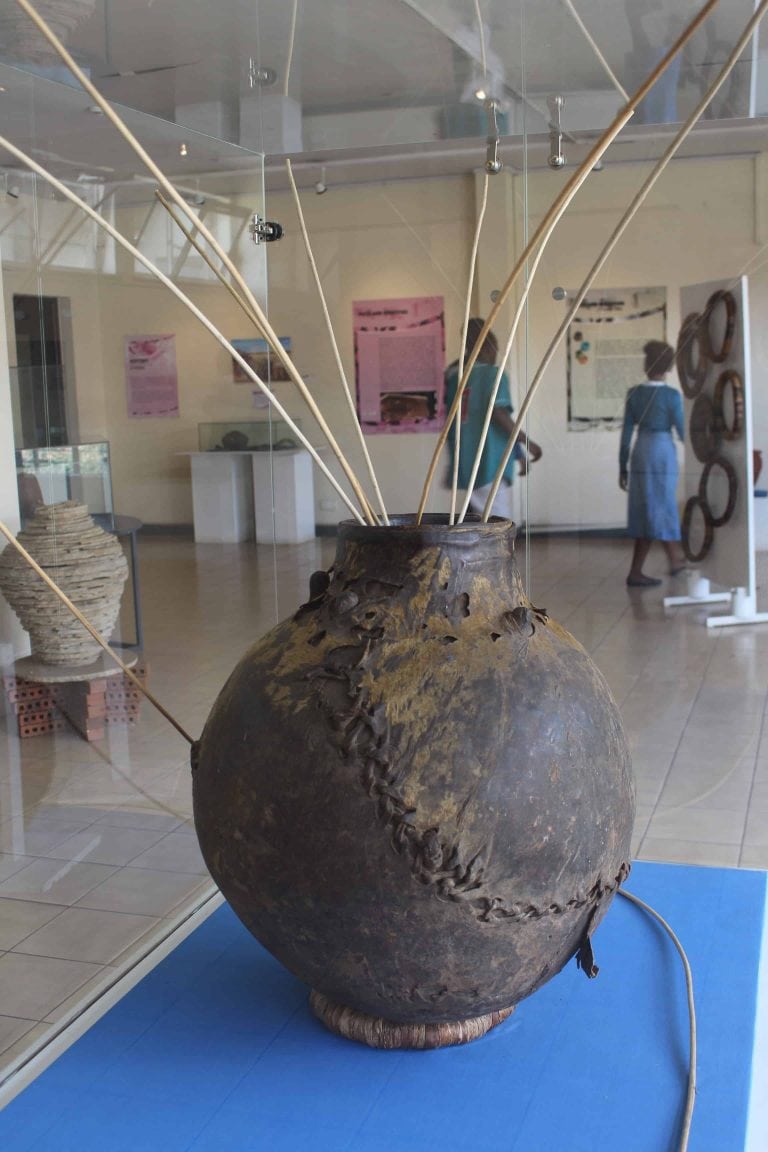 photo source: This is Africa

Kenyan clay pots designs have played a key role in identifying and distinguishing between the various tribes and peoples that occupied ancient Kenya. Archaeologists can study the specific design features to learn where a tribe traveled, what language they spoke, and what cultural traditions they practiced. Kenyan potters learned the craft from a young age and made their pots by hand, rather than a potter’s wheel. Usually, these potters were women, but records of male potters also exist. The clay pot pictured here was used in wedding ceremonies and elders would drink from it using reeds. 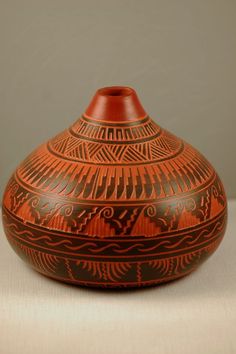 Navajo pottery today does not limit itself to traditional conventions, but takes inspiration from them. The oldest artifacts of Navajo pottery date between 1500 to 1700 CE. They usually lacked any main design features, but instead focused on function, using a waterproof pitch glaze that gave the pottery a glossy finish. In cases where decoration is present, the potter directly etched the design into the clay.

Years: 1325 CE – 1521 CE
Process: Hand developed, decorated and then heated
Distinctive Features: Red or orange tones with painted designs that were either for aesthetics or to aid in kitchen tasks
Function: Storage and cooking 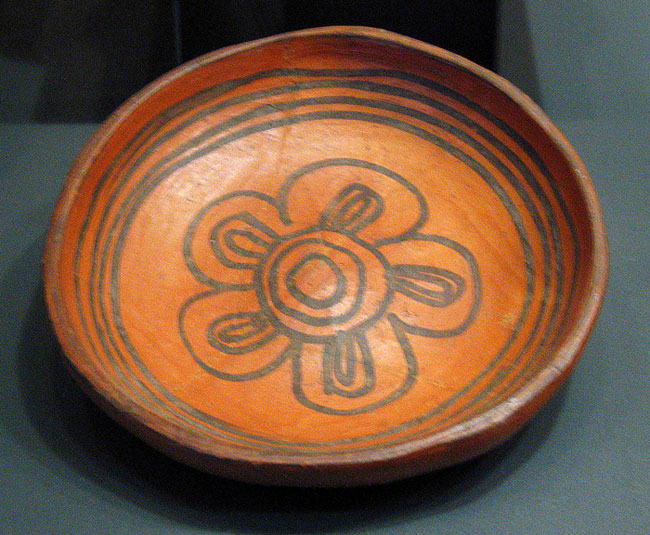 While each Aztec community had particular pottery designs and quirks they called their own, the Aztec civilization as a whole has been regarded as one of the greatest pottery producers. Both the rich and poor had pottery in their homes. For poorer families, pottery was usually rough in design and served functional purposes such as storage or cooking. Wealthier households possessed more refined pottery that was useful in cooking and serving a plethora of dishes. Aztec pottery utilized distinctive red clay, which colored their wares in similar tones.

Years: 250 BCE – 850 CE
Process: Hand sculpted, added tempers, and fired
Distinctive Features: Varied depending on the era, but usually featured figures that told a narrative
Function: Varied, could be for basic storage, diplomatic gifts, or ceremonies 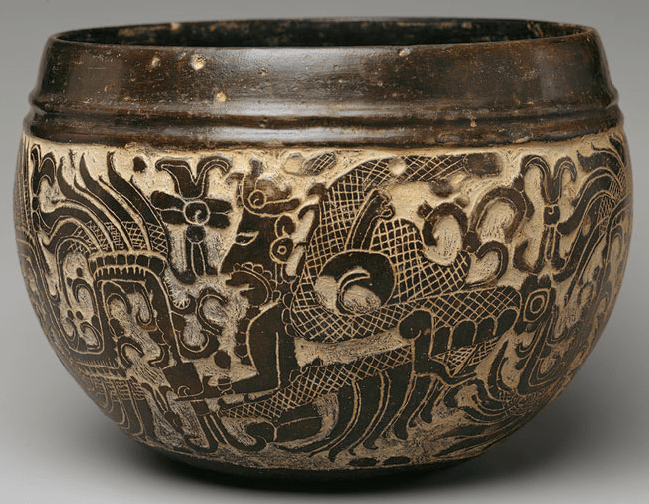 Maya pottery varied in purpose and function but was generally made through an established process. Potters would hand shape their vessels and then use fire to harden the clay, often experimenting with different firing techniques to create textured surfaces and other stylistic changes. Maya vases tell historians a lot about cultural practices through the images depicted on their surfaces, such as mythologies and sporting events. In some cases, the pottery stored food and drink and, in others, it was given as a diplomatic gift or used in ceremonies. Pottery styles changed throughout Maya civilization as potters experimented with sculpting and painting techniques.

Years: 620 – 530 BCE
Process: Made with a potter’s wheel, painted, and then heated in a kiln
Distinctive Features: Detailed black figures of people and animals that told stories
Function: Everyday uses such as storage or eating 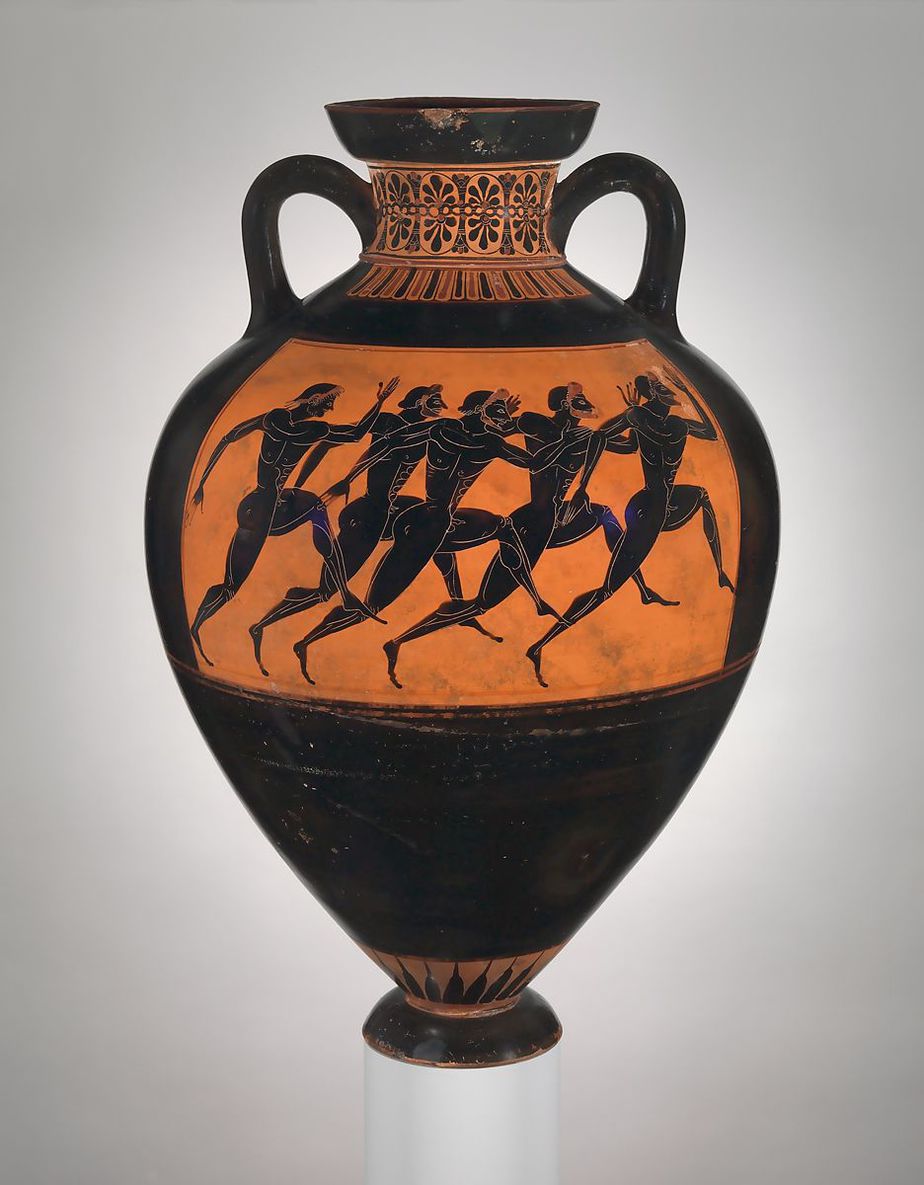 Greek black figure pottery is perhaps one of the most well known forms of ancient pottery to date (consider the opening scene from Disney’s Hercules, for example). These intricate jars, plates, and cups served everyday purposes and often told stories of myths, sporting events, and social occasions through the characters that decorated them. This realistic art style developed from pottery with black geometric shapes and grew in popularity with almost 20,000 such vases and jars in existence today.

Years: 202 BCE – CE 220
Process: Made of clay and used either a high or low heat process
Distinctive Features: Lead greenish glaze
Function: Burial and funerary purposes, from what has been discovered 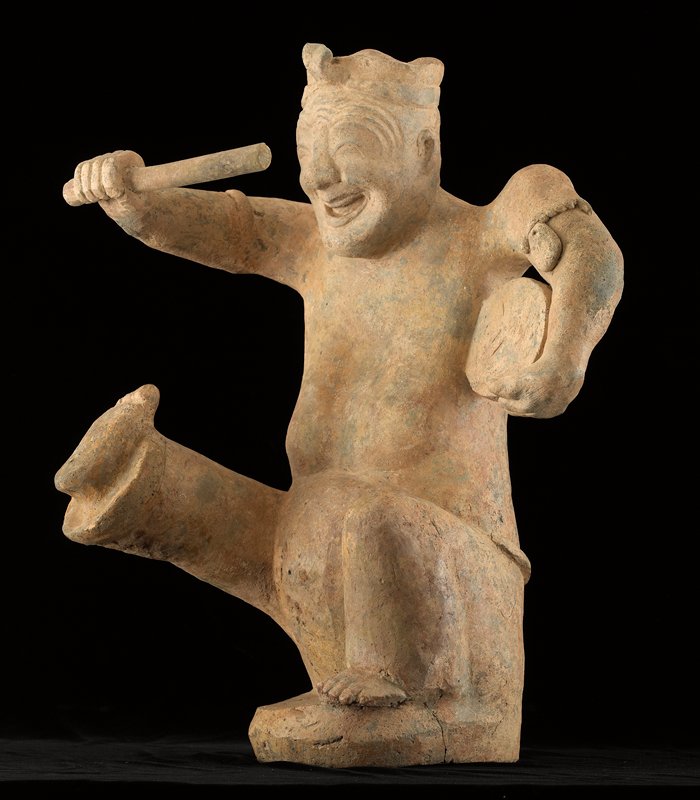 Much of what we have from this time period comes from graves and probably served spiritual and/or funerary purposes. The most commonly found pottery is the Hu storage jar, which was a copy of a bronze vase of the same name. Craftsmen also designed figurines of people and animals as well as architectural models that would be buried with the deceased.  Some of these figures offered entertainment or accompaniment in the afterlife.  Han Dynasty era artists usually glazed their pottery with a lead concoction that left the objects with a yellow to greenish hue that was definitely safer for the dead rather than the living.