There are hundreds of restaurants in London. However, some of them stand out not just because of the food they serve, but in the years they have existed.

That’s exactly what we are going to talk about today. Join us now as we go through our list of the 10 oldest restaurants in London. 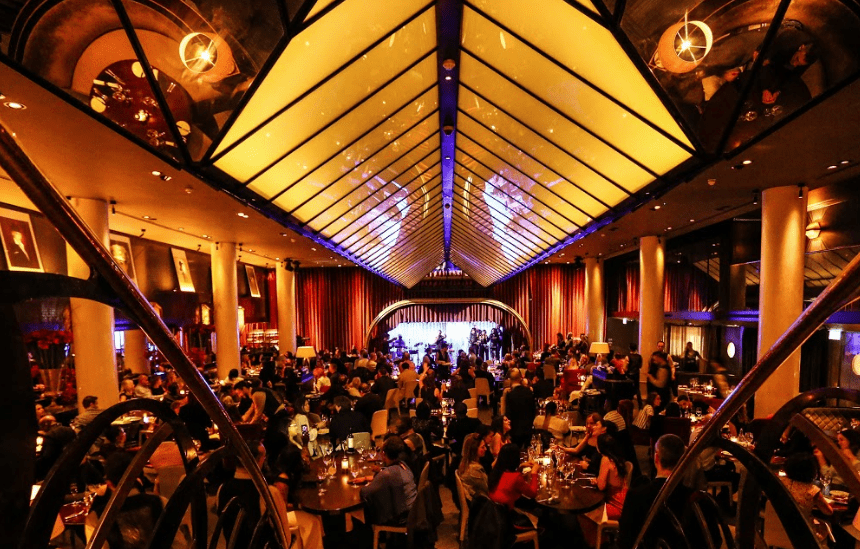 Quaglino’s is among the legendary restaurants in London because of its history and heritage. Today, it is famous for live music, art decorations, and of course, delicious Italian food. As an iconic restaurant, people think of glamour and luxury when they hear of Quaglino’s.

The current Head Chef is no other than Jack Smith who brings vibrant, exciting, and updated menus  for everyone to enjoy.

Quaglino came from Northern Italy and moved to England later in his life. He was a fascinating and talented waiter who worked hard to serve not just the customers, but also his employer.

At a young age, he was maître d’hôtel at the grand Martinez Hotel in Cannes. He moved to England and worked for Sovrani. However, Sovrani took an interest in Quaglino’s wife. This made Quaglino angry and as revenge, he opened his own restaurant and later won not just Sovrani’s customers, but a lot more people. 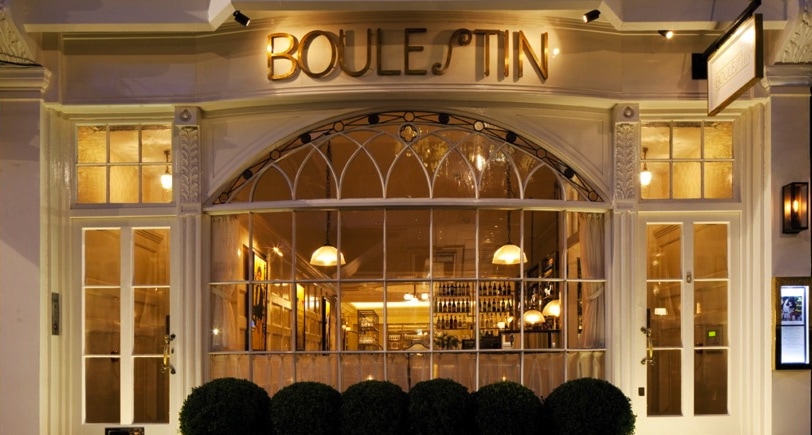 The Boulestin was first established in Covent Garden. It was considered to be the most expensive restaurant at that time and continued to be expensive until today. However, it’s a price you might have to pay to experience its luxurious and upscale food and environment.

The founder of the restaurant that bears its name, Xavier Marcel Boulestin, was no ordinary entrepreneur. He was a world-renowned French chef and author of various cooking books. He was credited to be the man who made French cuisine popular in all English-speaking nations. 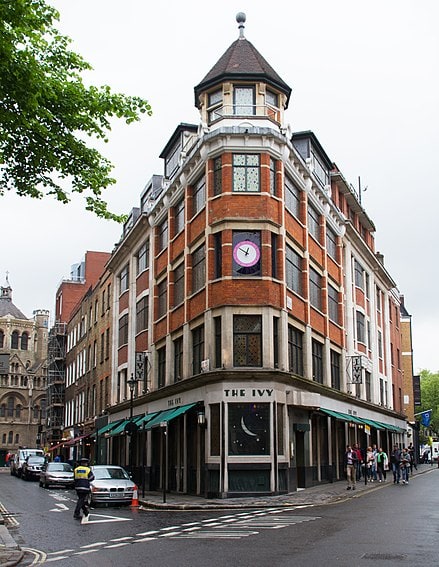 The Veeraswamy is considered to be the oldest Indian restaurant not just in London, but the entire United Kingdom. As an Indian restaurant, it started to serve Anglo-Indian cuisines. However, it later served authentic Indian food due to popular public demand.

Their Indian cuisine includes dishes from various regions of India including Lucknow, Punjab, Goa, and Kashmir.

The name of the restaurant was derived from the family name of Edward’s grandmother.

Edward Palmer, the founder of Veeraswamy restaurant, has an Anglo-Indian Heritage. He was also a retired British Indian Army officer. His grandfather was an English General and his grandmother was an Indian princess. 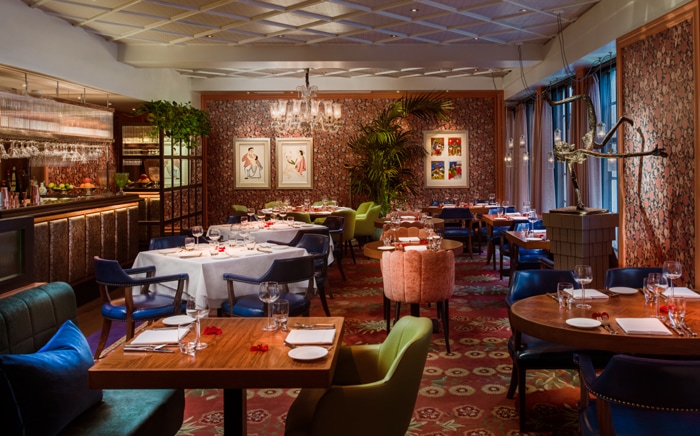 The Ivy was an unlicensed Italian cafe when it was first opened in 1917. What made The Ivy a huge success is its location. It is close to the Cambridge Circus, Ambassadors, and St. Martin’s theatres. This made The Ivy a popular restaurant for actors, actresses, students, and movie-goers.

In 1950, the restaurant underwent various ownership changes. From Giandolini, it was owned by Bernard Walsh. It was eventually owned by Lady Grade and then the Forte Foundation.

The name, The Ivy, according to legend, is from the words spoken by the actress Alice Delysia to the owner, Giandolini, “We will cling together like the Ivy.” This line is also found in the popular 1902’s song, “Just Like the Ivy I’ll Cling to You.” 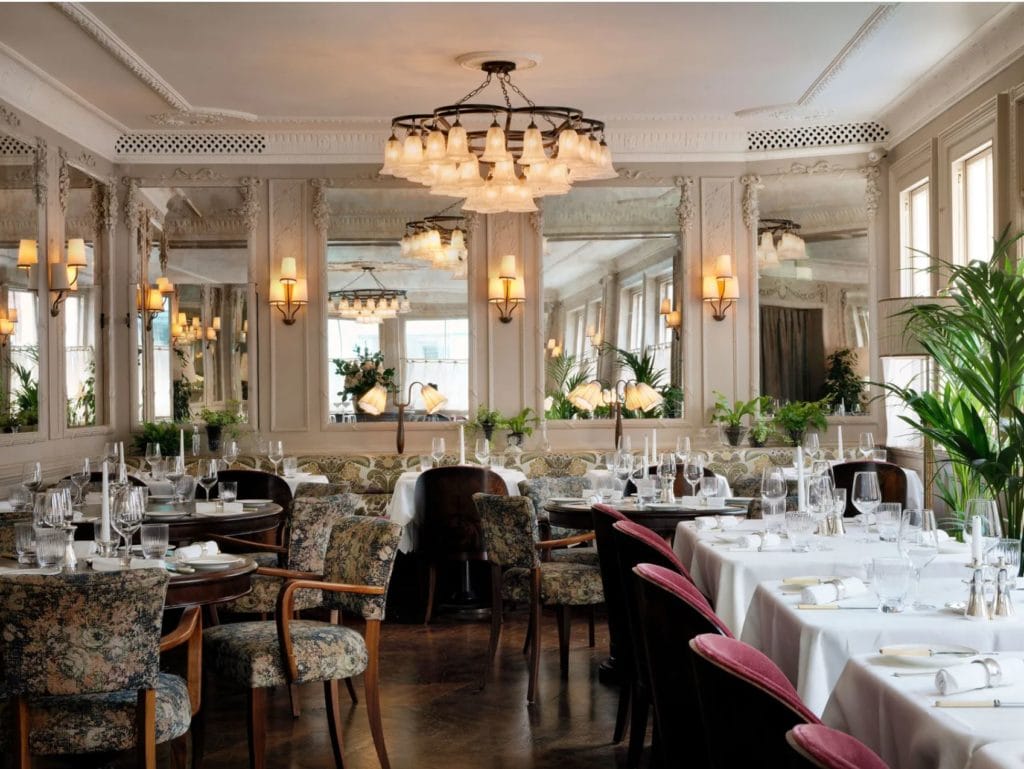 When Auguste Kettner opened his restaurant, it initially didn’t attract a lot of customers. Since it served French food, it didn’t click that much with the English people.

However, it was in 1879 that the restaurant got more and more attention. It was almost the same time when King Edward VII visited the place. That got people curious and so, the restaurant started to draw more crowds. This contributed to the success of Kettner’s that made it last until today.

Auguste Kettner is known to be the founder of Kettner’s Townhouse. He was a German chef who served as the cook of the first President of France, Napoleon III. When he opened his restaurant in 187, it was considered to be the first French restaurant established in London. 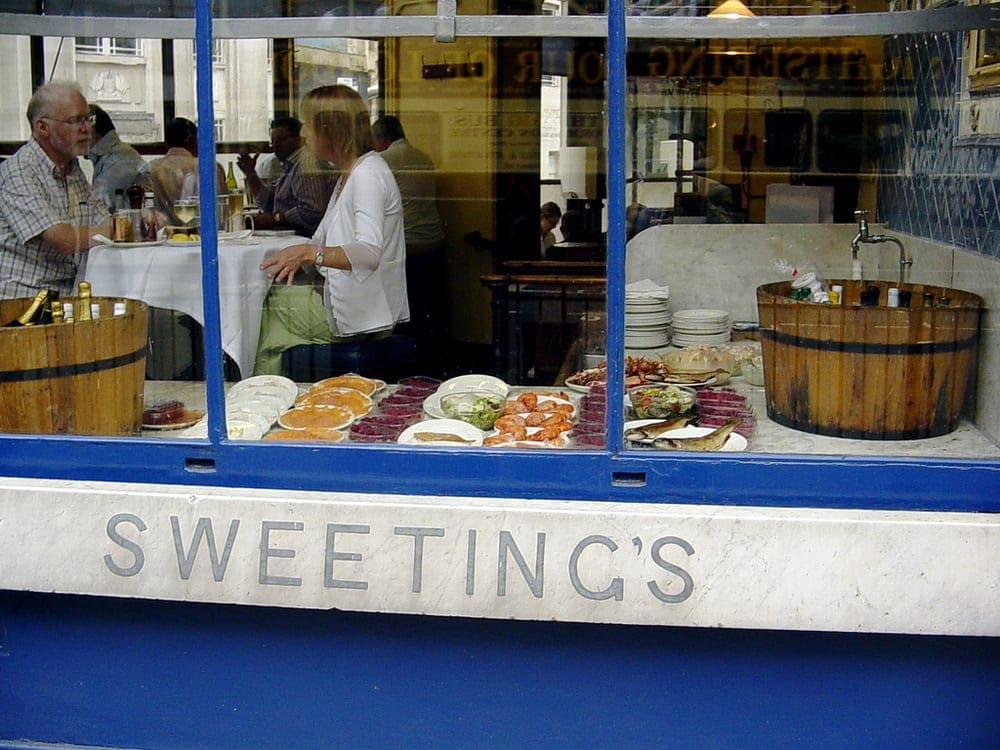 While the current Sweetings restaurant was established in 1889, it was first conceptualized in 1830 by John S. Sweetings in Lad Lane, Islington. It was known as Fish and Oyster Merchant.

Advertised with the tagline, “Very Superior Oyster Rooms,” the restaurant flourished and became a go-to place by many locals. One of the most famous customers of the Sweetings is the French painter Henri de Toulouse-Lautrec.

The Sweetings survived a lot of financial problems and calamities. It went through five ownership changes, two World Wars, and financial depressions.

4. Simpsons In The Strand 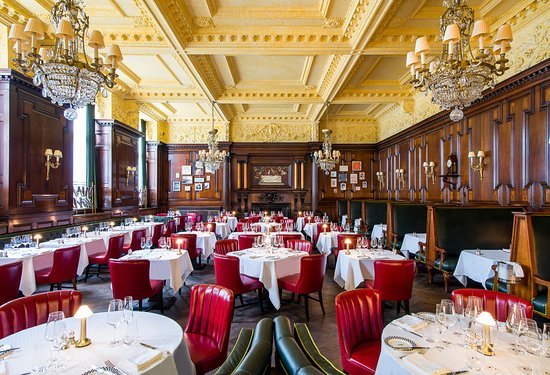 The Simpson’s in the Strand is among the most celebrated hotels in London. It is part of the Savoy Building, which is also a place where you will find the world-renowned Savoy hotel.

The restaurant was even made more popular when various great players around London and other places gathered together to play chess in the same place.

Before the Simpson’s was established, an earlier building on the same spot existed, which is called the Fountain Tavern. It’s the home of the Kit-Kat Club. It was in 1828 that it was replaced by the Simpson’s. The place then became a popular place for people who smoked cigars with their coffee while talking about politics and playing chess with other patrons. 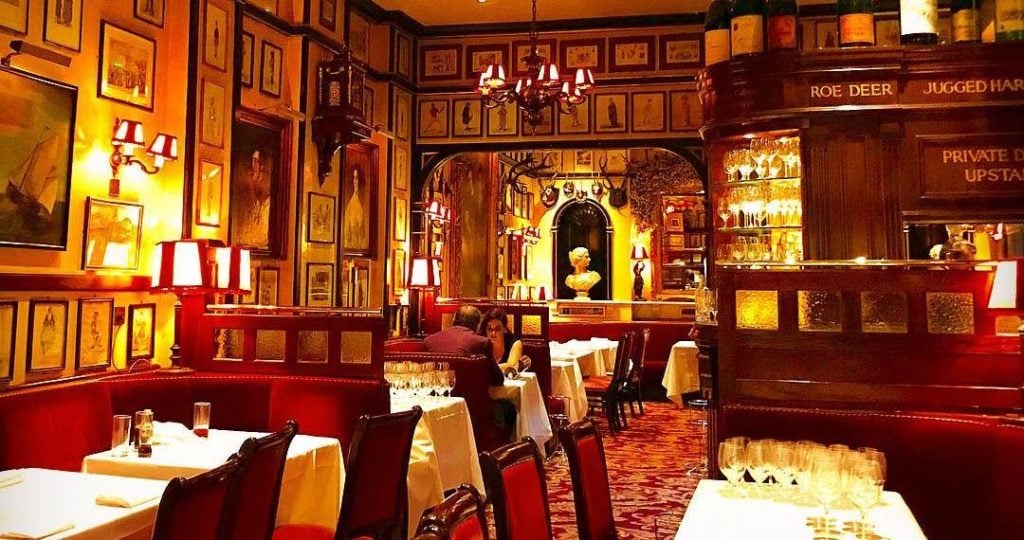 Thomas Rule opened his oyster bar in Convent Garden in 1798. It was his way to prove to his family that he will change his old irresponsible life and begin a more productive life. What started to be just a promise turned out to be a lasting legacy that will thrive throughout the centuries.

For more than 200 years of existence, covering nine monarchs, the Rules was owned by three families. The restaurant has been graced by famous writers, lawyers, artists, journalists, and celebrities.

If you ever visit Rules in London, you will see its glorious past all around the place. On its walls, you’ll find hundreds of pictures, paintings, drawings, and cartoons that have touched Rules. 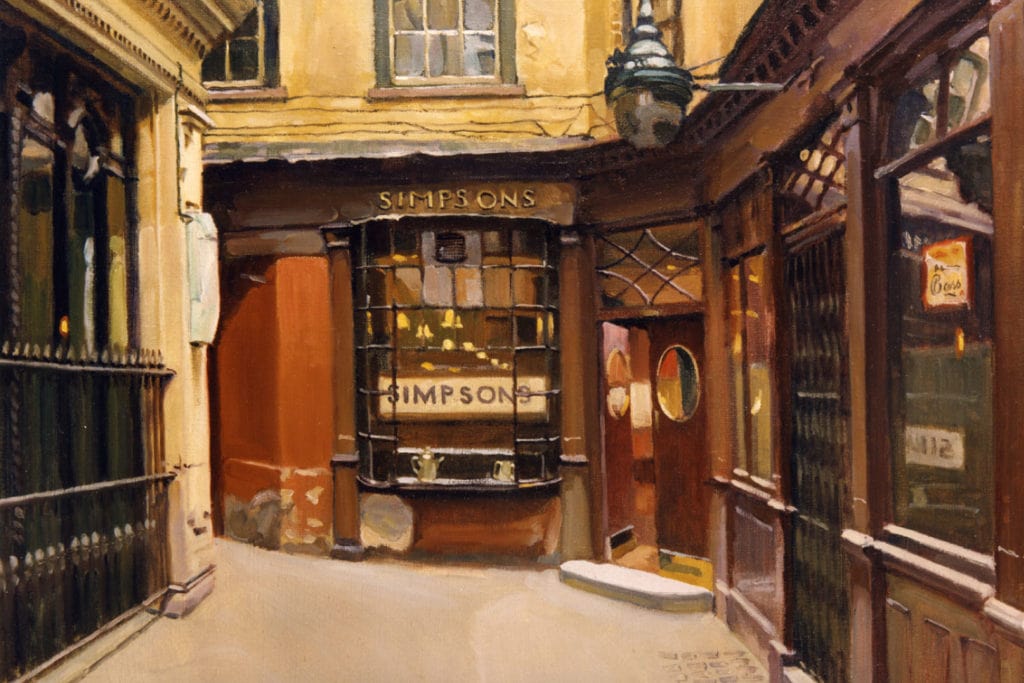 Simpsons Tavern will take you back in time. The design and aesthetic of the restaurant almost remained unchanged since it was opened. What’s more, its surroundings look like Old English in a beautiful and nostalgic way. Situated within the traditional courtyard and the Dickensian cobbled pathway, Simpsons Tavern gives you a glimpse of the past.

The Simpson Tavern is a business gift Thomas Simpson received from his father. The main customers of the old restaurants were workers from the nearby fish market. Today, the Simpson Tavern is loved by generations of tourists, city workers, and Londoners who love delicious traditional English Food. 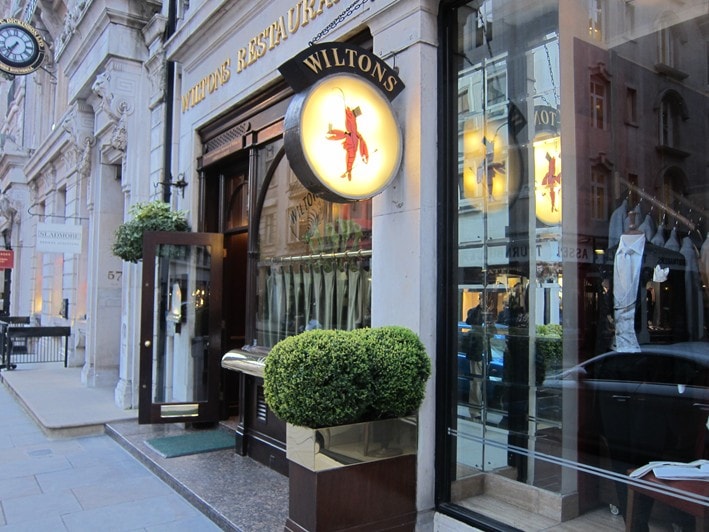 Wiltons is the oldest restaurant in London. It is more than two centuries old and still operating.

When George Wilton opened his restaurant in 1742, who would have thought that it would continue to thrive until today?

The Wiltons moved from one place to another due to road widening, war, and other reasons. The main dish in the restaurant is oyster, which has always been its trademark since it was first opened.

The ownership of the Wiltons has been dramatic. It was owned by the Wiltons until 1886 when Frank Wilton died, he didn’t have any children. Thus, for the first time, the restaurant was handed to someone outside of the family.