Advertising—it’s in our books, on our streets, and on our screens. Today, many of the ads we see are tailored to demographic details and web cookies, allowing companies to target the perfect audience to sell their products. This innovative and, perhaps, scary approach to advertising isn’t some fluke in the system, though. It’s based off centuries of marketing tactics from the world over. Read below to learn about some of the oldest advertisements known to history, along with their unexpected asks, products and services. 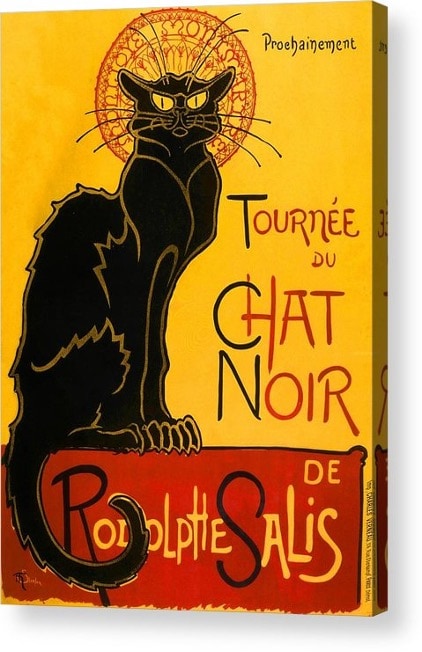 While non-French speakers might not know what it says, Le Chat Noir is internationally recognizable. Employing bright colors and an art style specific to the time and place, the poster has featured on postcards, books and Pinterest boards for over a century. In its heyday, Le Chat Noir was a well-known cabaret in Paris’ Montemartre district, inviting performers of all kinds to act in front of a captive and boisterous audience. For about 15 years, the cabaret invited a vivid art scene to the area.

While the poster and its subject are quintessentially French, the designer Théophile-Alexandre Steinlen, hailed from Switzerland 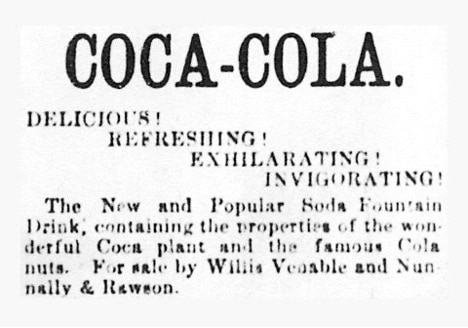 Known for its bright red packaging and distinct taste, Coca Cola is a drink that needs no introduction. In the mid-1880s, however, this was far from true. The first Coke ad is lackluster compared to its modern counterparts. Just a small block of text in the “Atlanta Journal,” it reads, “Delicious! Refreshing! Exhilarating! Invigorating!” Even more fascinating, it advertises the only store where the drink was available—oh, how times have changed. 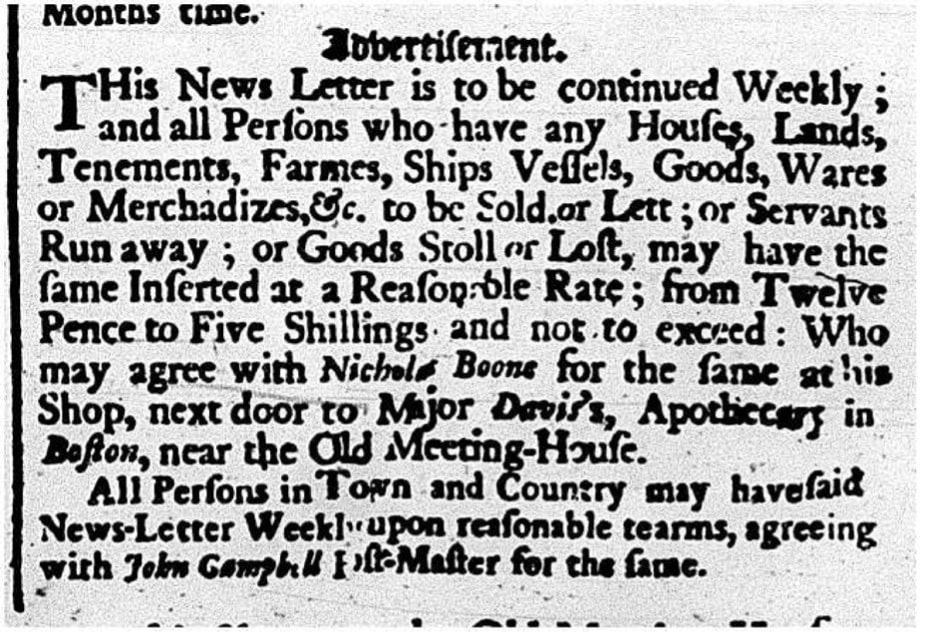 Skipping about 300 years into the future, we find the first paid newspaper advertisements on the American continent. Started on April 17, 1704, “The Boston News-Letter” was the first consistently printed newspaper in the colonies. While the news was often delayed by a month or so, the News-Letter provided updates and articles about the goings-on in London to the distant colonists. The first issue also included a note about paying a small fee to advertise. Two weeks later, the newspaper featured ads about retrieving stolen items, land for sale and something about lost anvils.

Due to writing conventions at the time, the paper title was written as “The Bofton News-Letter.” 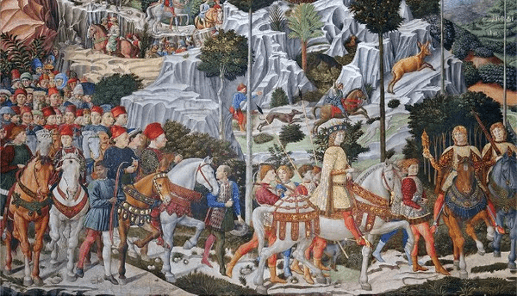 At the same time that William Caxton was parading his books around Westminster, Benozzo Gozzoli was painting frescoes for one of Italy’s most notorious families. While frescoes aren’t necessarily advertisements in the same way as the entries above, they still served an important role in uplifting social status. Intricate and expensive, the frescoes commissioned by Piero de Medici at Magi Chapel displayed the Medicis as Italy’s leaders. Several of the other figures in the fresco are their friends and allies. Anyone who looked at them could be impressed by the Medici’s political power. 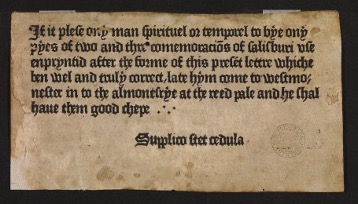 Due to its small size, few examples of the book flyer survive today. The example above advertises William Caxton’s “Sarum Pie,” a self-printed religious text. Measuring roughly around 80 x 146 mm, this small card was posted in the city and even features a Latin phrase at the end that roughly translates to: “Please keep this strip posted.” The strip tells customers where to purchase the book, says that the text lacks any errors (ironic for a time without standardized language) and is printed in the same typeface as the ad itself. 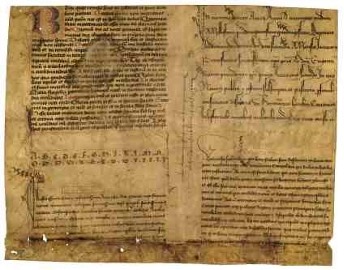 As writing and literacy became increasingly valuable commodities in medieval Europe, the need to advertisement one’s writing and reading skills did as well. One way of accomplishing this task was a window display sheet in which an individual would write several passages to prove their penmanship and scholarly prowess to potential customers. If the sheet impressed anyone, the scribe would be hired to write down important information—offering more insurance that simple word of mouth. 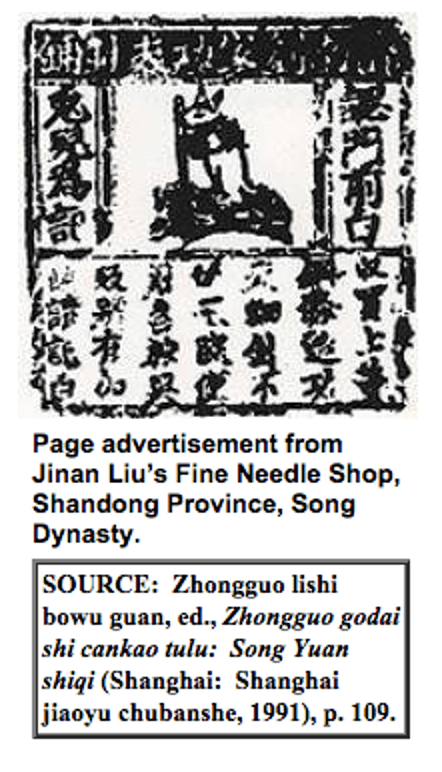 One of the oldest known advertisements from China and the oldest known print advertisement in the world is fairly innocuous. Made using a copper plate stamp, the posters read, “Jinan Liu’s Fine Needle Shop: We buy high quality steel rods and make fine quality needles, to be ready for use at home in no time.”  Perhaps more surprising is the presence of a logo in the middle of the text—a rabbit holding a needle. Turns out advertising gimmicks haven’t changed in over 700 years.

While Charles Gutenberg is often cited as the father of the printing press, printing as a practice actually began in China in 800 AD. 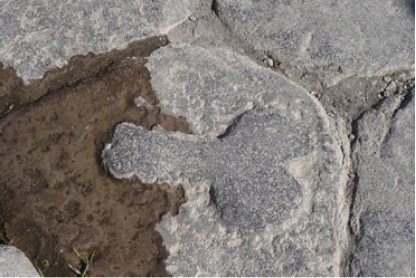 A direct approach to marketing, this recovered curb stone features a phallic symbol that indicated the way to the nearest brothel.Prior to its infamous demise, Pompeii was a bustling cityscape filled with all sorts of businesses—several legalized brothels included.

In a time when literacy was a luxury among only the wealthy, educated classes, images as advertisements offered an alternative and necessary form of communication. 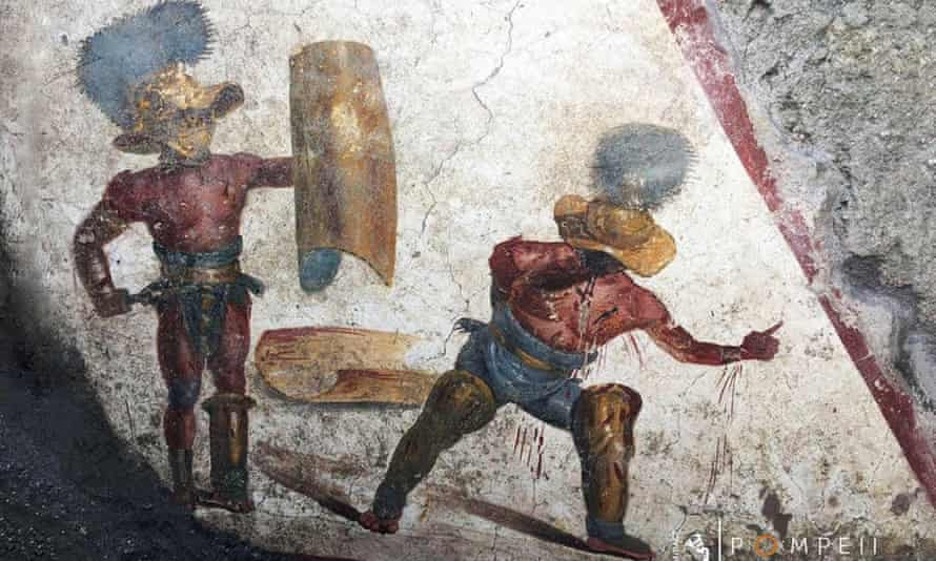 Pompeiians, like many members of the Roman Empire, enjoyed spectating at local gladiator tournaments—the fatal and bloodier equivalent of modern football games. Gladiator ads took on several forms, many of which included professionally painted or carved signs in front of wealthy homes. The biggest selling point was the number of gladiators present at a tournament. People wanted a show and, in this case, more was merrier.

Most gladiators were highly trained and costly slaves. If one died in battle, their trainers charged their sponsors an exorbitant amount. Allowing one’s gladiator to be slain, therefore, was a sick sign of generosity. 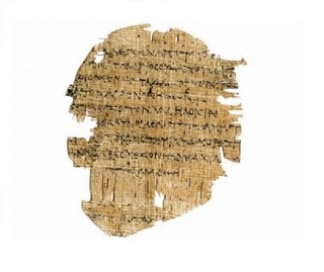 The world’s oldest known advertisement has an unfortunate focus. Created by a fabric seller named Hapu, the papyrus asks local citizens to find and return a slave named Shem to his store, offering a reward of a gold coin and the chance to look at the fabrics in the shop. Thankfully, records show that Shem successfully escaped. Overall, it seems that Hapu used the advertisement as a ploy to lure customers into his shop.

One of the first paper materials ever made, papyrus comes from ancient Egypt, where it was cultivated from the papyrus plant along the Nile

Posted by Lauren Johnson 0
The first firearms were created in China after the Chinese invented black powder in the 9th century. The earliest depiction…