The world’s first skyscraper was built in Chicago by William LeBaron Jenney in 1885. While that building no longer exists, many skyscrapers from that time period are still standing.

All of these early skyscrapers are located in the United States, primarily in New York City and Chicago, and a few other major American cities.

These old structures have stood the test of time and many have recently had extensive modern renovations.

As of March 2021, the information on this list is as accurate as possible and will be updated as needed. 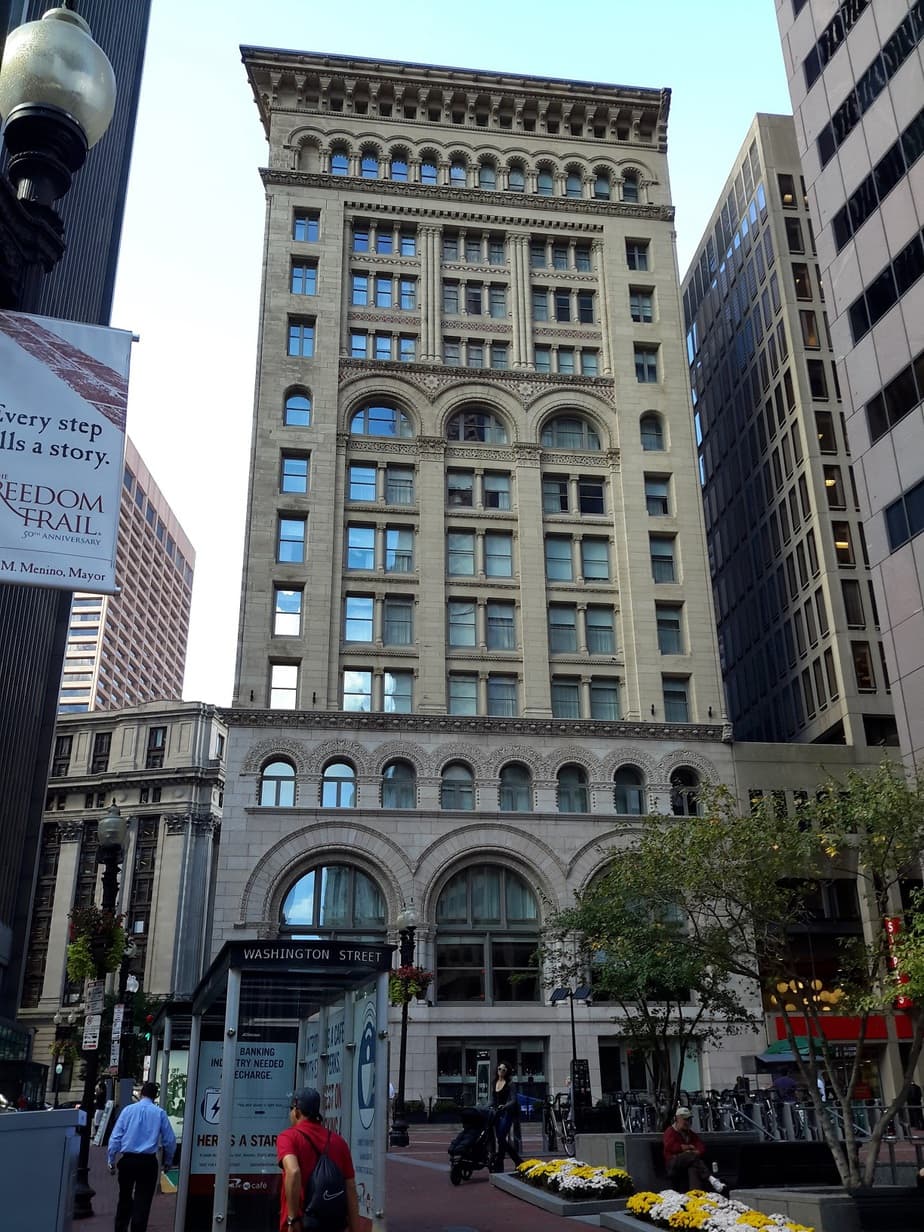 The Ames Building was the first skyscraper built in Boston and was the tallest building in the city until the Custom House Tower was built in 1915. The building is named for Frederick L. Ames, heir to a fortune in railroads and shovel manufacturing, who commissioned the building in the late 19th century.

The exterior structure of the Ames Building was completed in 1889, but interior work was not finished until 1893.

After its completion, the Ames Building served as the headquarters for Ames families’ agricultural tool company as well as the offices of its architects Shepley, Rutan and Coolidge. In 2007, after several years unoccupied, the Ames Building was converted into a luxury hotel.

The facade of the Ames Building features extensive masonry work and it is the tallest masonry building ever constructed in the United States. 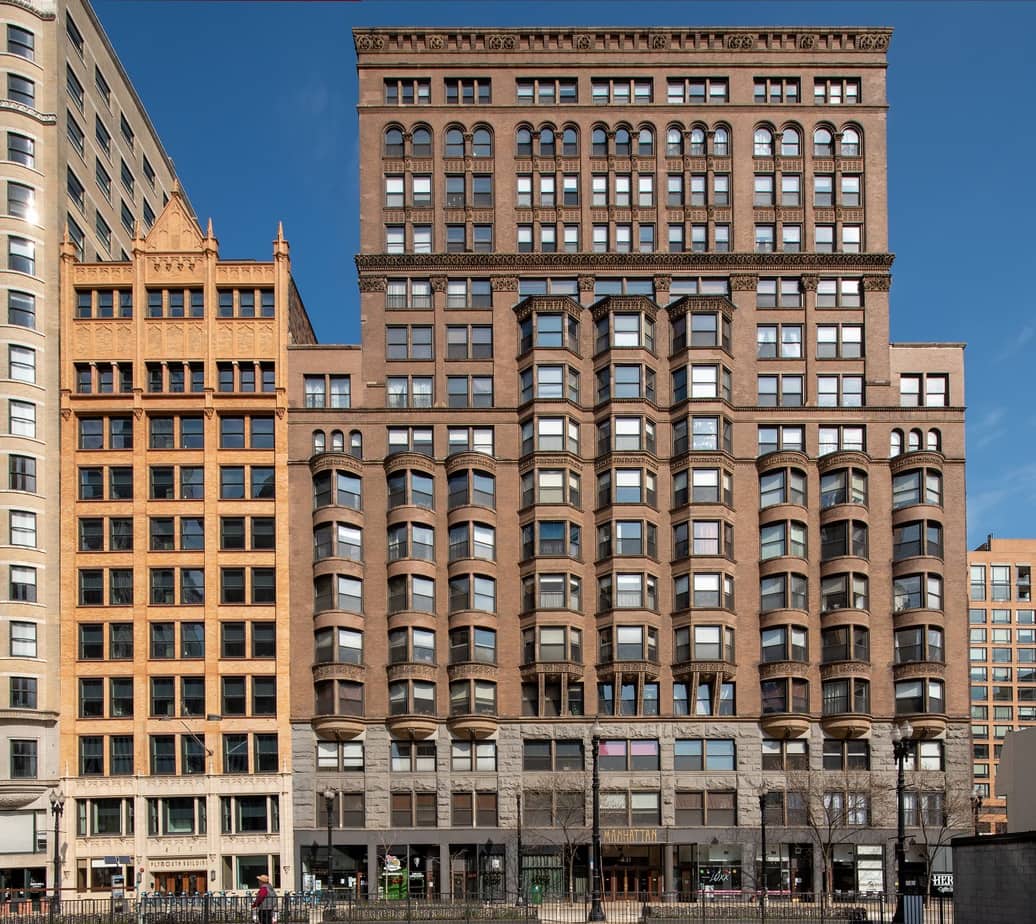 The Manhattan Building is one of Chicago’s oldest standing skyscrapers and at the time was one of the best examples of early skyscraper architecture. It was designed by architect and engineer William LeBaron Jenney, who built the world’s first skyscraper in 1885 and is considered the Father of the American skyscraper.

The façade of the Manhattan building features granite on the lower floors and brick on the upper levels, which helped lighten the building’s load on its internal structure; it also gives the building a unique aesthetic.

Since its completion, the Manhattan Building has always been used as commercial office space.

In 1976, the Manhattan Building was added to the National Register of Historic Places and it was designated a Chicago Landmark two years later.

Completed in 1891, the Manhattan Building is the oldest surviving skyscraper in the world to use a purely skeletal supporting structure and was the first 16-story building in the world. 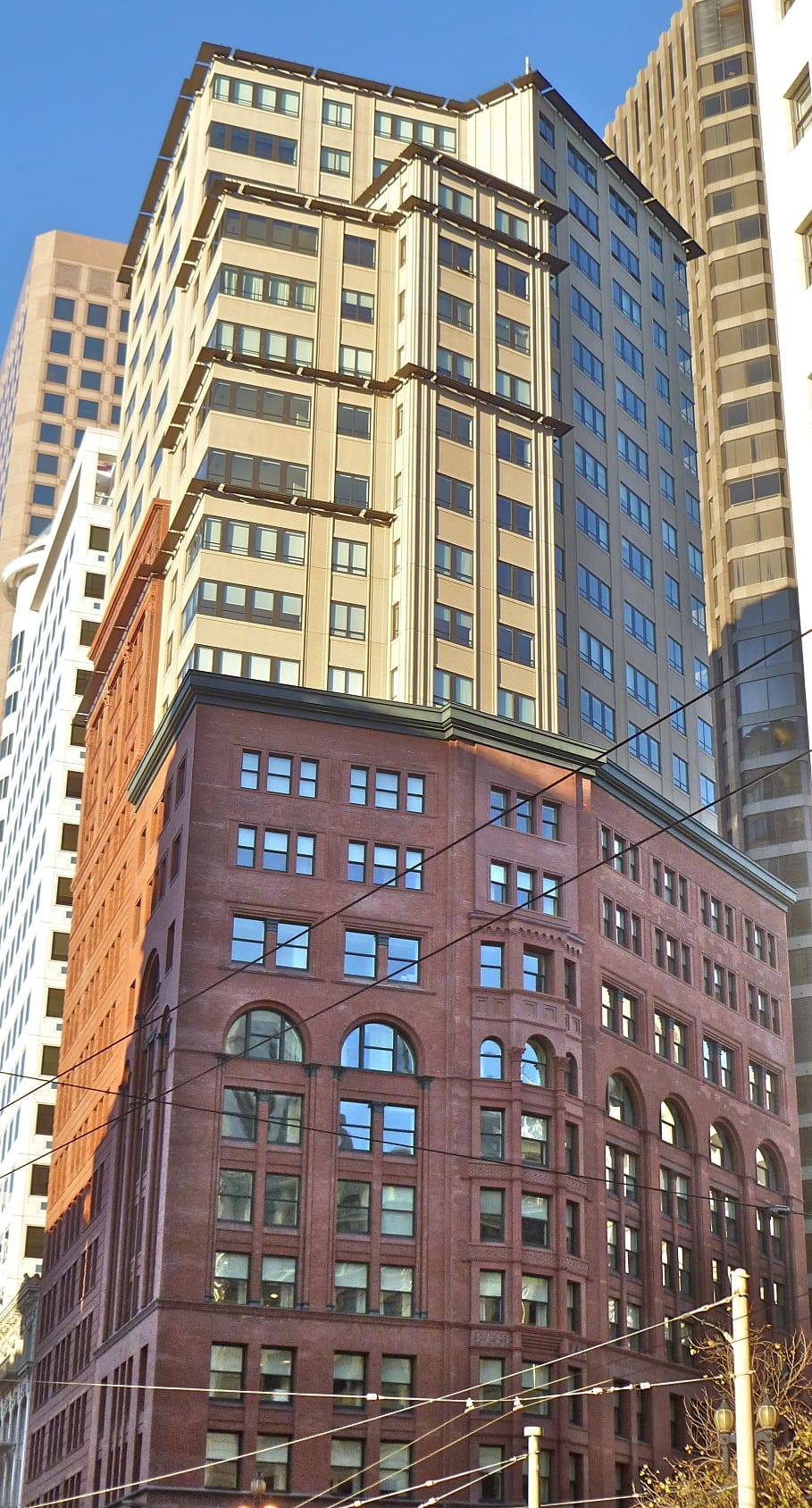 The Old Chronicle Building (sometimes called the De Young Building), which is now part of the Ritz-Carlton Club and Residences, is the oldest skyscraper in the Western part of the United States.

The building was commissioned by the De Young Brothers, owners of the San Francisco Chronicle in 1888. The De Youngs chose legendary skyscraper architects Burnham and Root of Chicago to design the Old Chronicle Building and it was completed in 1889.

The San Francisco Chronicle occupied the building until it moved to its current headquarters in 1924. The Old Chronicle Building became a regular office building for several decades before extensive renovations were made in the early 2000s.

The building was converted to residential use and eight new stories were added on top of the 16-story annex. Since 2007, the Old Chronicle Building has operated as the Ritz-Carlton Club and Residences.

Although the Old Chronicle Building survived the 1906 San Francisco earthquake, the interior was badly damaged and the building was rebuilt by architect Willis Polk, who ran the San Francisco office of Burnham and Root. 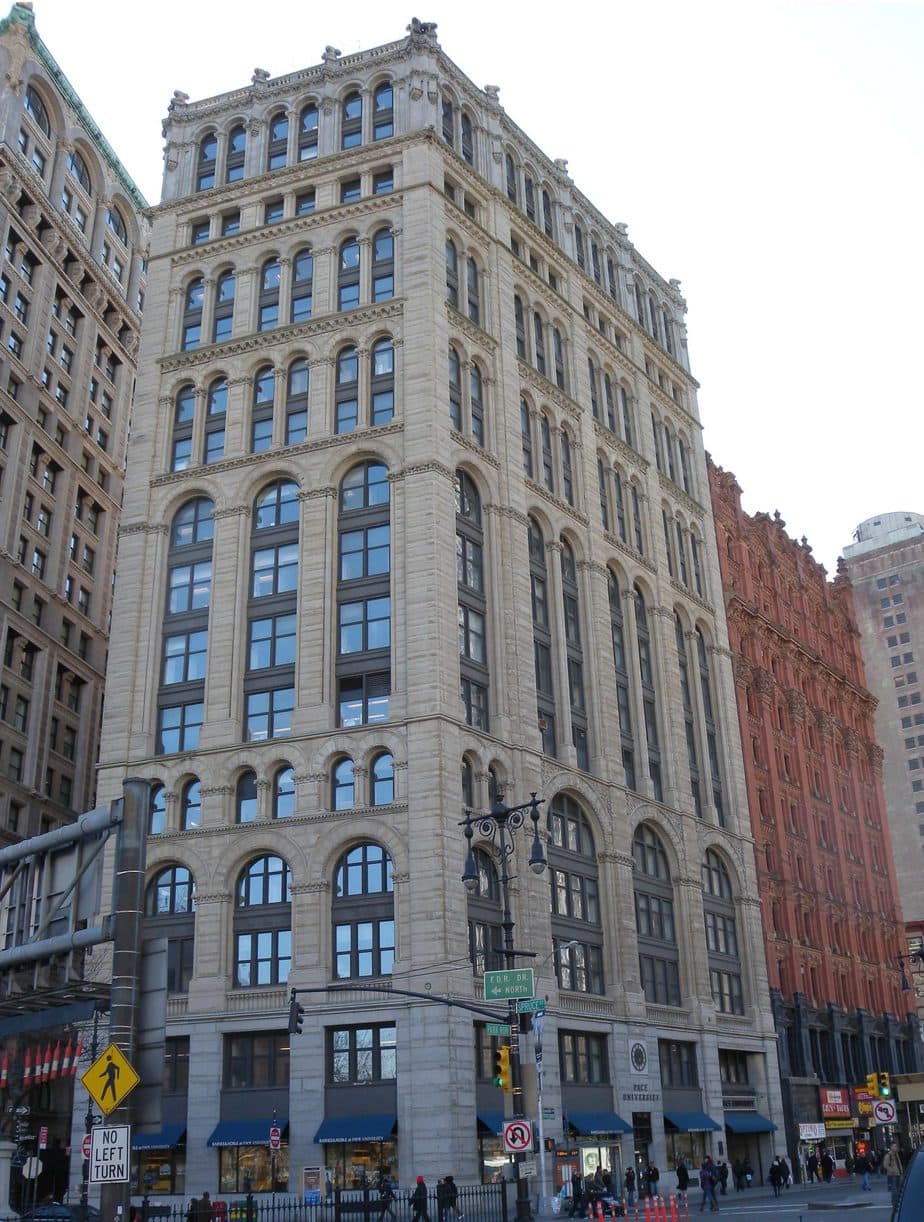 41 Park Row, commonly called the New York Times Building, served as the headquarters for The New York Times from its completion in 1889 until 1903, when the newspaper moved to One Times Square.

The New York Time Building was designed by George B. Post in the Romanesque Revival style and was originally 13-stories tall; the building was later extended to its present 16 stories.

After The New York Times left 41 Park Row, the building was occupied by many tenets from the paper industry and other areas of business. Since 1951, the New York Times Building has been owned by Pace University, which recently completed modern renovations on the building. 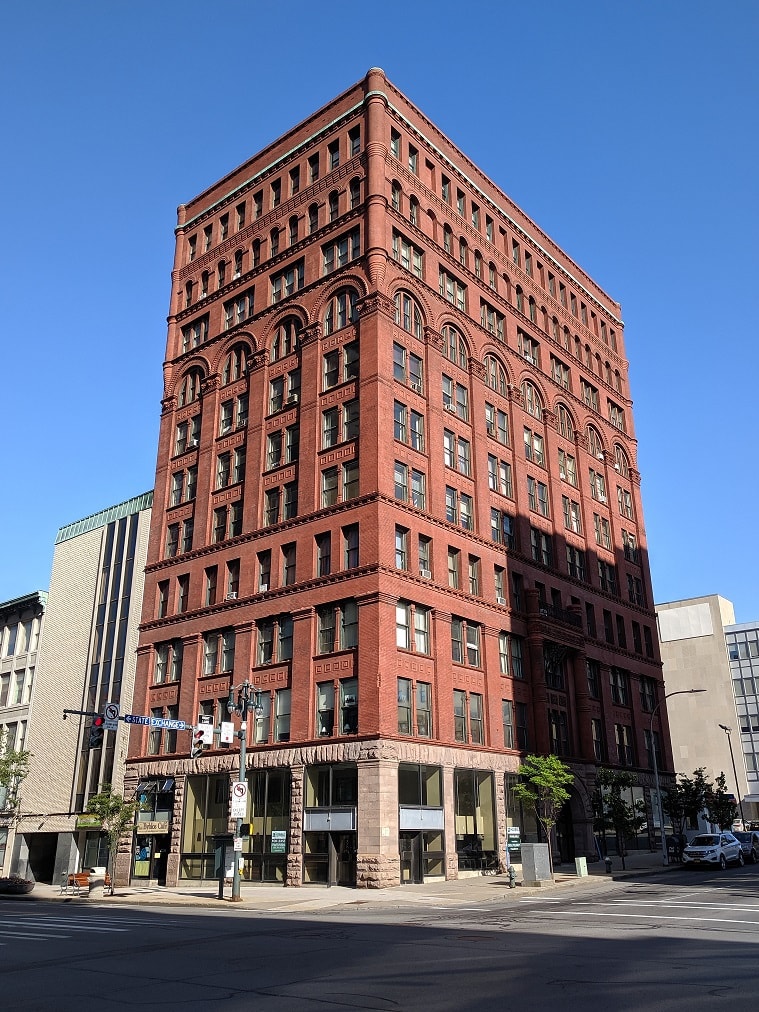 The Wilder Building was Rochester, New York’s first skyscraper, standing at 11-stories in height. It was built between 1887 – 1888 and was commissioned by Samuel Wilder, a prominent banker and real estate developer in the area.

The first New York skyscraper was designed by noted Rochester architects Warner & Brockett in the Romanesque style popularized by H.H. Richardson. Originally, the Wilder Building featured a spire on each of its four corners, but they have been removed. In 1985, the Wilder Building was added to the National Register of Historic Places.

The Wilder Building is home to the oldest surviving mail chute, which was invented in 1883 by James Goold Cutler as a way to make mail collection in skyscrapers easier. 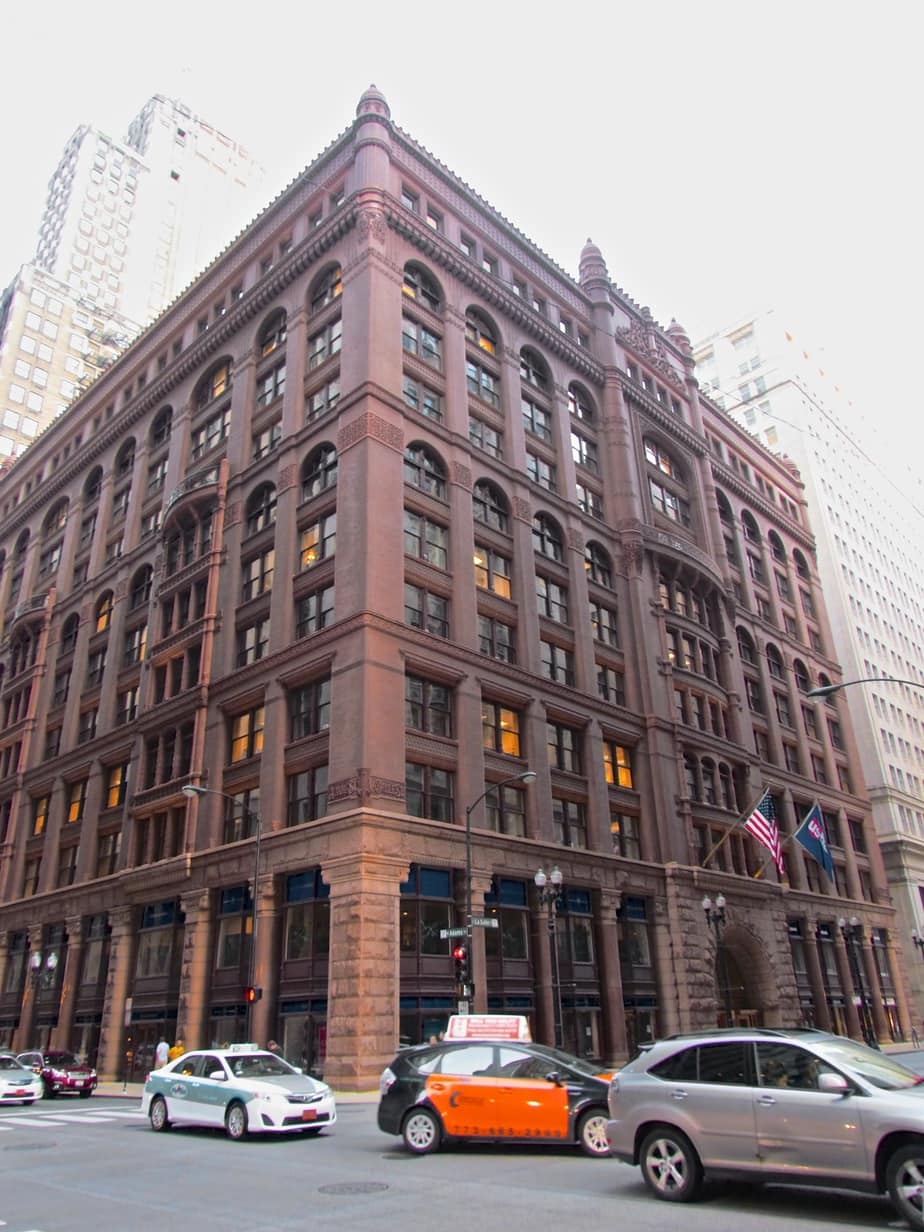 The Rookery Building is the oldest standing skyscraper in Chicago. Completed by architects Daniel Burnham and John Wellborn Root of Burnham and Root in 1888, the Rookery is considered one of their masterpiece buildings, and was once the location of their offices.

The Rookery is located in the heart of Chicago’s financial district and has always been a prestigious office building.

Over the years, the Rookery has been updated to modern standards, while retaining the heart of its original design. In 2014, the Rookery Building achieved its LEED (Leadership in Energy and Environmental Design) Gold Certification. The Rookery is the oldest LEED certified skyscraper in the world.

The Rookery Building gets its name from the temporary building that occupied the land before it was built, and after the Great Chicago Fire, which served as an interim city hall and was nicknamed the “rookery” because of all the crows and pigeons that perched on the building, as well as the alleged corrupt politicians it housed. 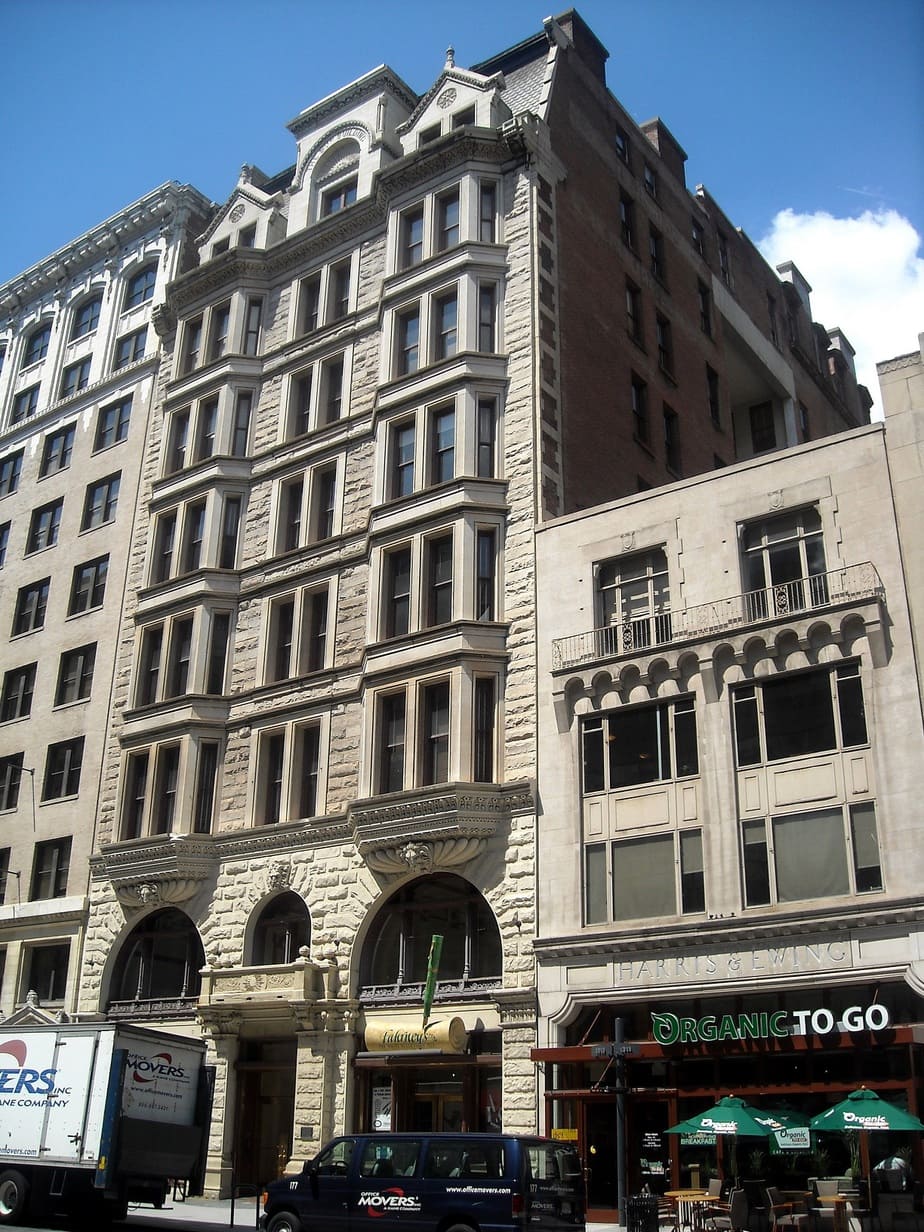 The Sun Building, originally built as the Baltimore Sun‘s Washington bureau, is the oldest existing skyscraper outside of New York City. Designed by Alfred B. Mullett, the Sun Building was constructed between 1885 – 1887.

At the time, the Sun Building was the tallest building in Washington, D.C. and Mullett used groundbreaking design features to achieve this feat. The Sun Building features a steel skeleton that allowed Mullett to design a structure seven floors above a two-story ground-floor and mezzanine.

The Baltimore Sun operated out of the building’s ground floor while the other spaces were left open for additional tenets. Tenants included the Interstate Commerce Commission, Woodrow Wilson’s law firm, Daniel C. Roper, and the Federal Bureau of Investigation. The Sun Building has been on the U.S. National Register of Historic Places since 1985.

The Sun Building featured steam elevators, which made it the first structure in Washington, D.C. to use a passenger elevator. 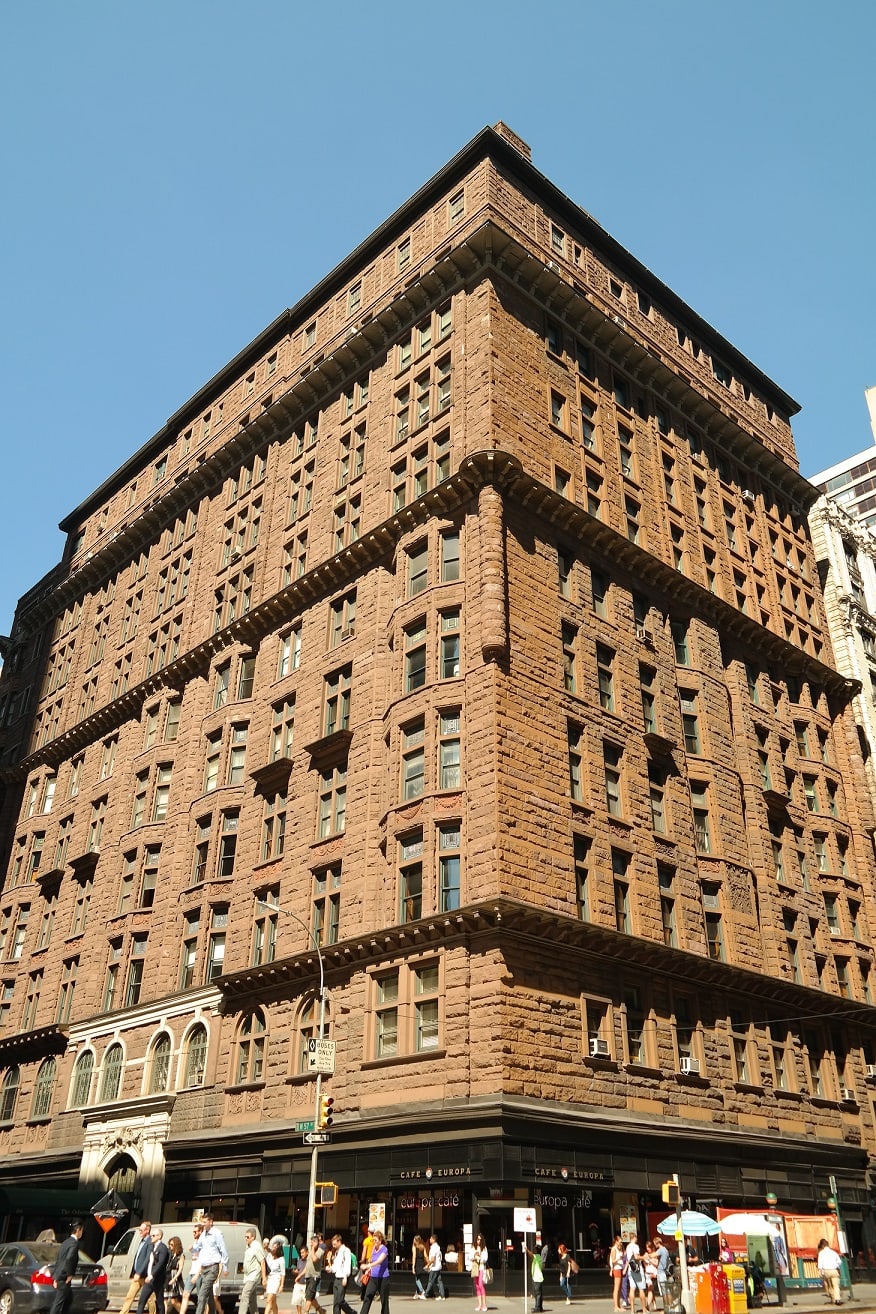 The Osborne Apartments also know as The Osborne is another late 19th-century skyscraper that has become a well-known New York City landmark. Originally designed by James Edward Ware, the Osborne was constructed between 1883 – 1885.

An annex was added to the west side of the building in 1906, designed by Alfred S. G. Taylor and Julien Clarence Levi. The main section of the Osborne features 11-stories, while the rear section, which originally housed servants’ quarters, is split into 15 smaller stories.

The Osborne is named for Thomas Osborne, an Irish immigrant who ran a successful stone contracting business, who originally commissioned the building. Due to the Osborne’s proximity to Carnegie Hall, the apartments, many stage actors and musicians have called the historic apartment building home. The Osborne was designated as a New York City landmark in 1991.

The Osborne is the second oldest luxury apartment building in New York City, behind the Dakota, which is not featured on this list because it does not meet the requirements for an early skyscraper. 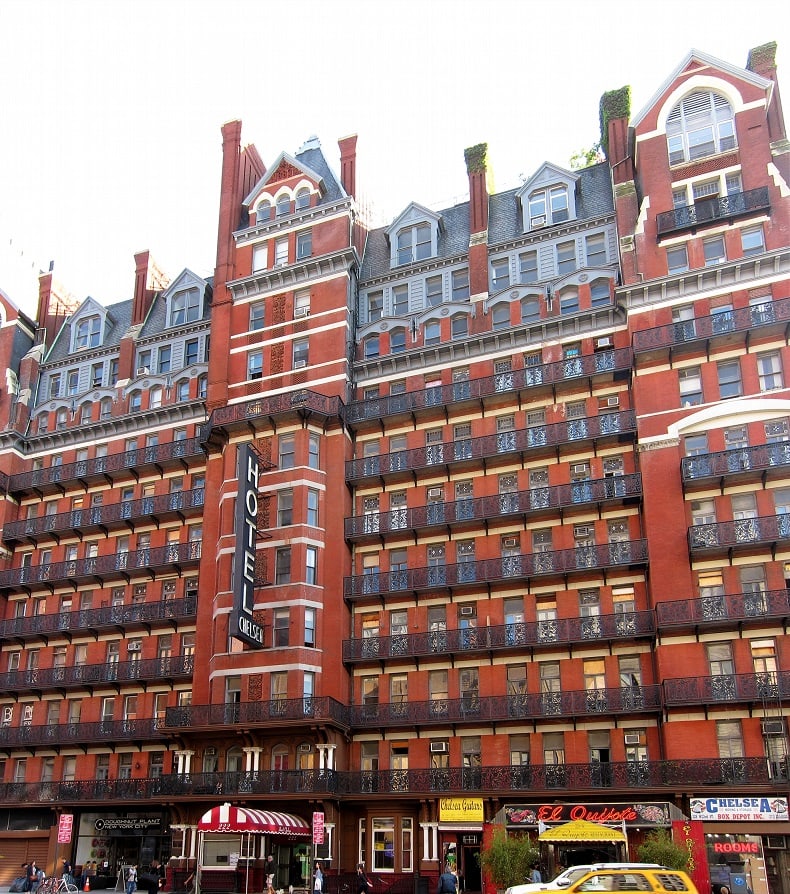 Hotel Chelsea or the Chelsea Hotel or simply the Chelsea is one of New York’s most iconic buildings and its most famous hotel. The historic hotel was opened in 1884 and was one of the city’s first private apartment cooperatives.

Since then, the Chelsea has been home to numerous writers, musicians, artists, and actors. Some of those famous faces include Tennessee Williams, Jack Kerouac, Mark Twain, Stanley Kubrick, Uma Thurman, Patti Smith, Bob Dylan, and several of Andy Warhol’s superstars.

The 12-story Hotel Chelsea was built in a style dubbed a mix between Queen Anne Revival and Victorian Gothic. It was designed by Philip Hubert of the firm of Hubert, Pirrson & Company. Today, the Hotel Chelsea no longer accepts new long-term residents, but some people who lived there before the rule change have been allowed to stay.

Not only has the Hotel Chelsea housed some of the world’s most famous people, but the hotel itself has been featured in movies, TV shows, songs, and books, such as Chelsea Girls by Andy Warhol and “Sara” by Bob Dylan. 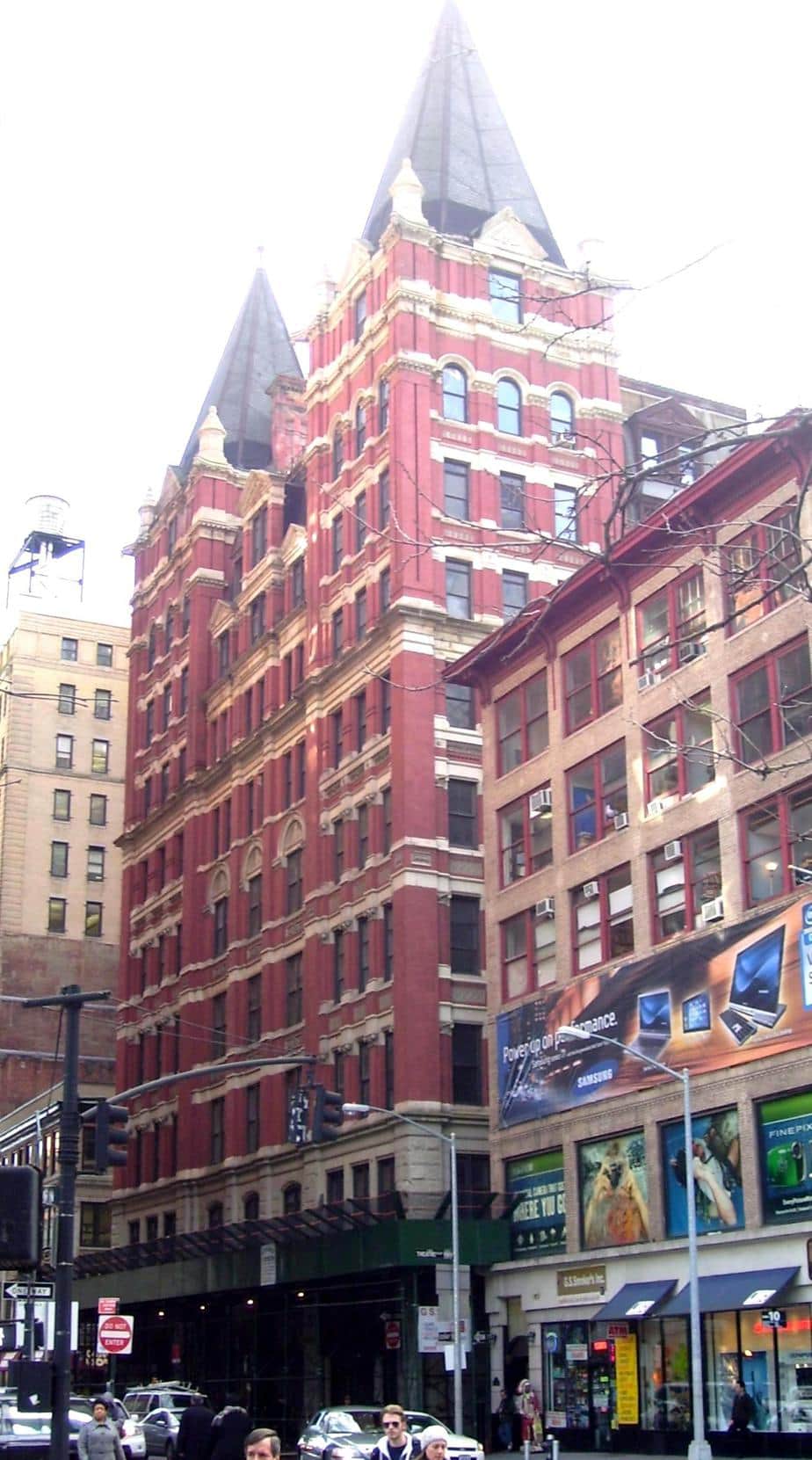 The Temple Court Building was originally built between 1881 – 1883, making it the oldest skyscraper in the world that is still standing today. This old skyscraper is currently part of a larger building complex called 5 Beekman Street or Beekman Hotel and Residences.

The 10-story Temple Court Building and the Annex (which was added later) is connected to the 51-story condominium tower called the Beekman Residences. The Beekman Hotel has 287 units spread across all three buildings.

The original portion of the Temple Court Building is on the northern section of the lot and was designed by the firm of Benjamin Silliman, Jr. and James M. Farnsworth.

The structure, intended as offices for lawyers, was commissioned and originally owned by Eugene Kelly, and was sold to the Shulsky family in 1945.

The Annex was added in 1890 to the south side of the original building and it was designed by James M. Farnsworth, who had split from Silliman in 1882.

Although the Temple Court Building and Annex have stood the test of time, the building was abandoned in 2001 and construction of the Beekman Residences tower didn’t happen until 2014 – 2016.