Pyramids are closely associated with the Ancient Egyptian culture, which erected these grand monuments as tombs for their Pharoahs. Although the Egyptians are credited with building the very first pyramids, they are not the only ancient cultures who built such structures — in fact, the Mesopotamians (one of the first civilizations), built the earliest pyramidal structures called ziggurats.

With the exception of the Caral Pyramids in Peru, all of the pyramids on this list are located in Egypt. 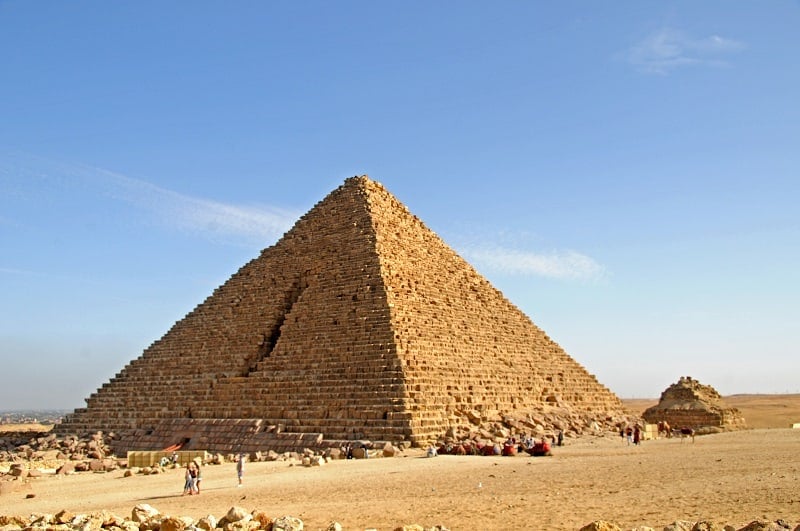 The Pyramid of Menkaure is the smallest of the three main pyramids of Giza, but is still one of Egypt’s most impressive monuments. It was built as the tomb for Menkaure, the sixth Pharaoh of the 4th dynasty.

Menkaure’s pyramid is significantly smaller than the other two Giza pyramids, it was one-tenth the size of Khafre’s. The construction of the pyramid was abandoned after Menkaure died, but was completed by successor Shepseskaf.

One of the pyramid’s most noticeable features is a large gash on the north face of the pyramid — this was done in the 12th century by the second Ayyubid Sultan, al-Malek al-Aziz, who tried to tear down the pyramids of Giza, starting with Menkaure’s. 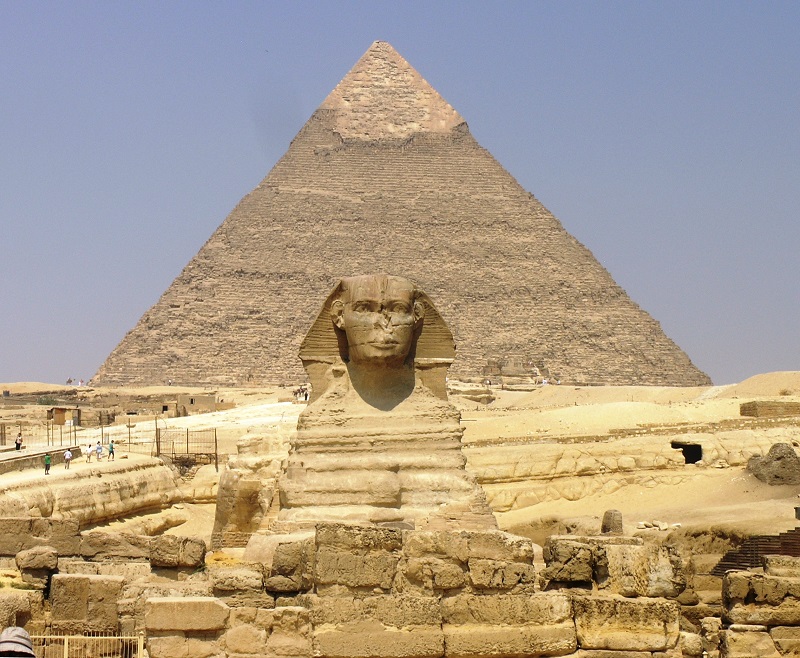 The Pyramid of Khafre is another of Egypt’s iconic pyramids located in Giza. It was built by Khafre, the son of Khufu, who knew his pyramid had to live up to his father’s. He chose to build the pyramid on a bedrock foundation to give it the illusion that it was taller than the Great Pyramid.

Additionally, Khafre’s mortuary complex was more elaborate than Khufu’s. The most notable example of the statues built around Khafre’s pyramid is the Great Sphinx of Giza. Although conflicting viewpoints exist, it is widely believed that Khafre also built the Sphinx as its temple is similar to his mortuary temple. 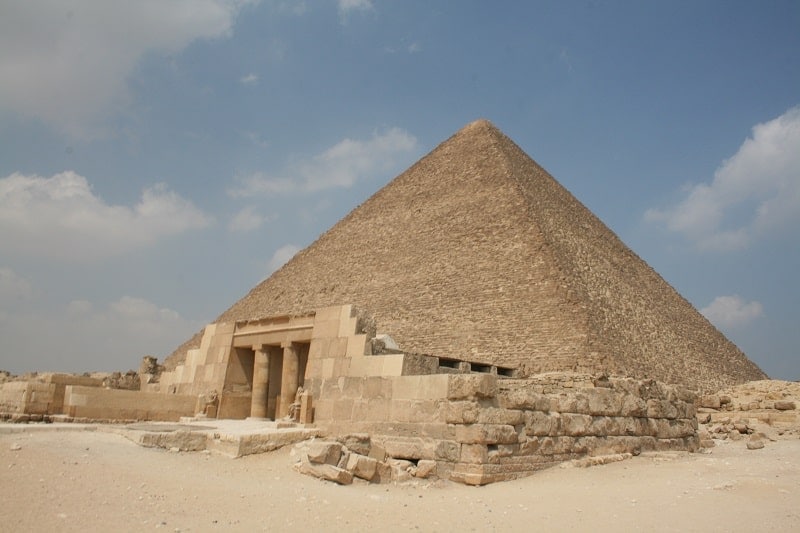 The Great Pyramid of Giza is the most famous pyramid in the world and is the last of the ancient Seven Wonders of the World. The pyramid was built by Pharaoh Khufu, the son of Sneferu, and was the tallest man-made structure in the world for over 3,800 years until the Eiffel Tower was completed in 1889.

Although the pyramid has been extensively studied, exactly how it was built still remains a mystery. Several theories have been proposed over the years and one of the most popular beliefs, that the Great Pyramid was built by slaves, has been discredited – it (and all other Egyptian temples and monuments) was constructed by Egyptians who were hired for their skills and compensated for their efforts. 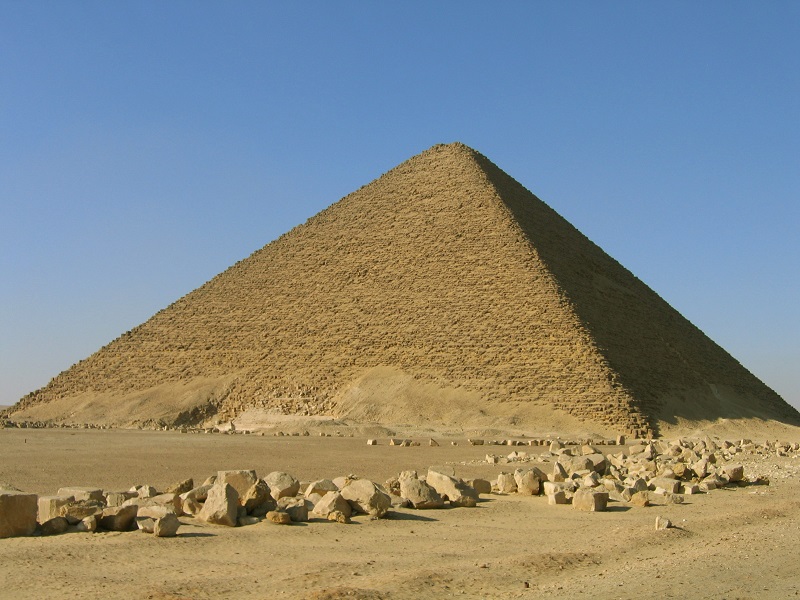 The Red Pyramid, also known as the North Pyramid, is the third and largest of Sneferu’s pyramids – it is the third largest pyramid in Egypt. After Sneferu’s first two attempts to build a true pyramid (Meidum and the Bent Pyramid) failed, his third attempt was successfully and the world’s first true pyramid was finally built. 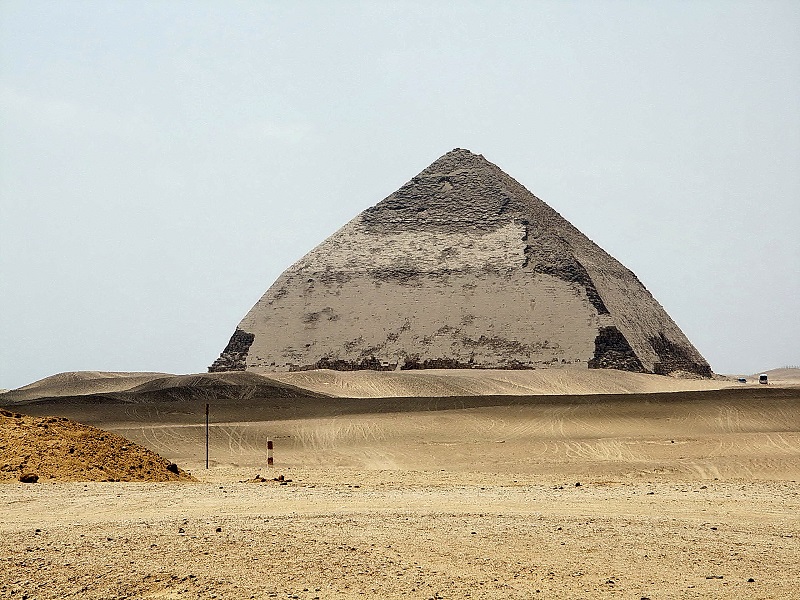 The Bent Pyramid was the second pyramid built by Sneferu and the Egyptian’s first attempt at building a smooth sided pyramid. Archaeologists believe that the shift in the angle near the top of the pyramid was due to signs of structural instability during its construction — this angle change gives the pyramid a “bent” appearance. Another unique feature of the pyramid is that a majority of its outer limestone casing remains intact today.

The pyramid also houses two burial chambers, each with a separate entrance, which is an uncommon pyramid feature. Although the interior of the pyramid is currently closed to the public, a substantial wooden stairway was built for the convenience of tourists as there are plans to open it. 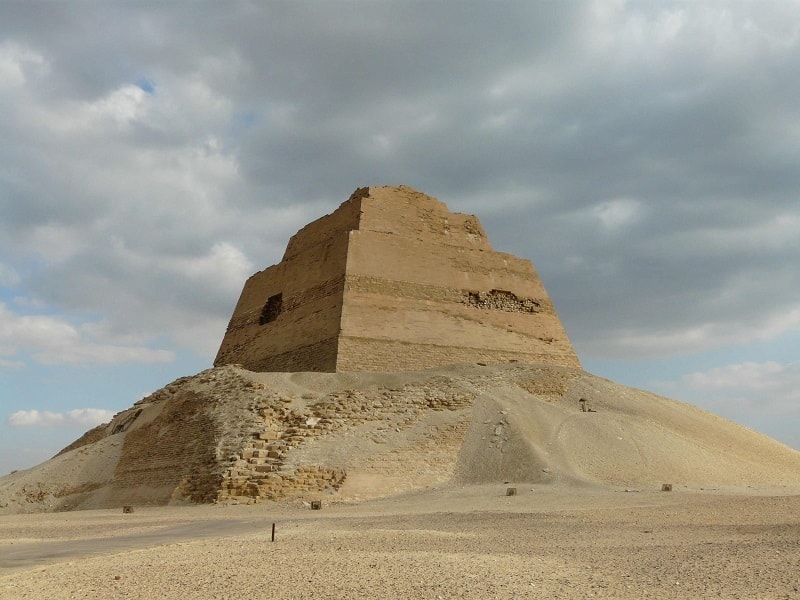 The Pyramid of Meidum, which is now known as the “collapsed pyramid” or “el-haram el-kaddab” (the “False Pyramid” in Arabic), is believed to be the second Egyptian pyramid built sometime after Djoser’s.

The pyramid has earned all of these nicknames over the years because not much of its structure remains — by the 15th century, only five steps had survived and today it no longer resembles a pyramid at all.

Although archaeologists are not sure, they think that the pyramid’s construction may have been started by Huni, but completed by Sneferu. The pyramid’s instability is most likely due to all of the modifications made to it while it was being built.

The pyramid city of Caral is contemporary with the first pyramid of Egypt and the Norte Chico civilization that inhabited the city is the first known civilization in the Americas.

Caral was the capital city of the Norte Chico civilization and it was a metropolis with complex agricultural practices, temples, an amphitheater, sunken circular plazas, residential areas, and six large pyramidal structures.

Caral was first discovered in 1948, but initially received little attention — it was not until the 1970s that archaeologists realized that the “natural hills” in the area were actually stepped pyramids.

Since then, the site has been extensively excavated and studied and it was declared a UNESCO World Heritage Site in 2009. 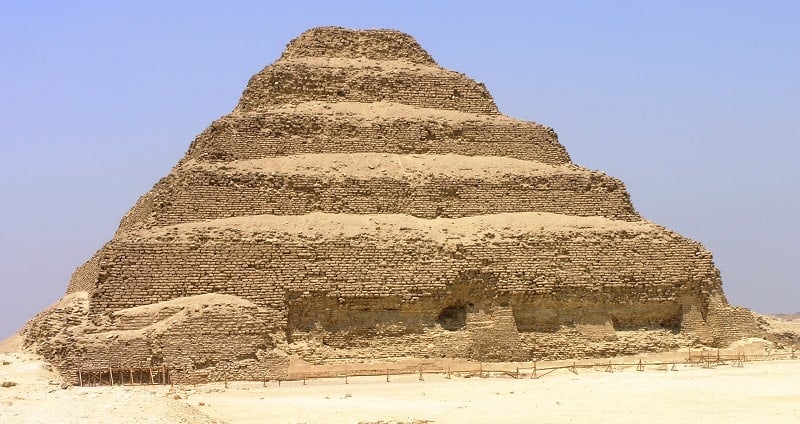 The Pyramid of Djoser is the first Egyptian pyramid and despite claims of older pyramids being found in recent years, it is the oldest confirmed pyramid in the world. The pyramid was built for Djoser (sometimes spelled Zoser), the first king of the Third Dynasty of Egypt, by Imohtep, Djoser’s vizier.

Imohtep wanted to build a grand tomb for his king and decided to stack mastabas — a flat-roofed structure with sloping sides – on top of one another, creating the very first step pyramid. The pyramid is the center of a large mortuary complex that includes a recessed limestone wall, a temple, and a statue of King Djoser. 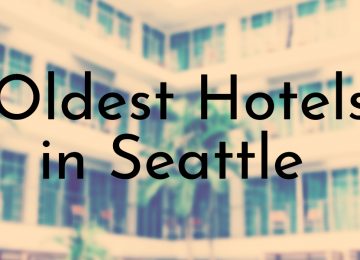