The United States of America began its story soon after European colonization, becoming the country known as the land of the free. The National Road was the first federally funded road in United States history, built between 1811 and 1834.

The development of this road was significant for unifying the country, as George Washington and Thomas Jefferson concluded.

But even before this moment, many streets and roads all over the country were established by immigrants, merchants, and blue-collar workers. Famous streets in America represent its past, holding a significant role in understanding the nation’s history. 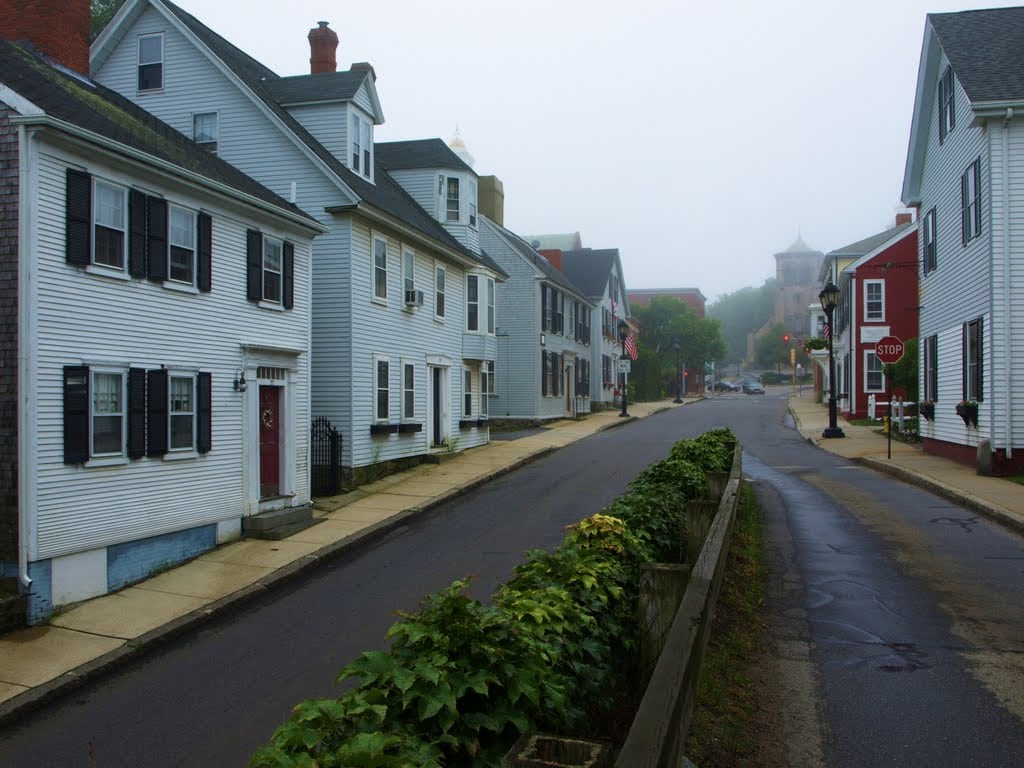 Leyden Street, originally named First Street, is the oldest continuously inhabited street in Plymouth, Massachusetts. The Pilgrims settled on the road in 1620 before calling it Leyden Street in 1823.

The street is also the oldest in all 13 colonies of British North America.

The houses from this period didn’t survive long enough. But the existing homes from the 18th and 19th centuries are a part of the tour, and a couple of historical sites under the Plimoth Patuxet Museums, formerly known as Plimoth Plantation.

The Pilgrims had a church house and several cannons on the Burial Hill, also known as Fort Hill, before turning it into a cemetery. Some of the oldest gravestones date back to 1657. The fort was turned into a house for town official William Harlow, which still stands today. 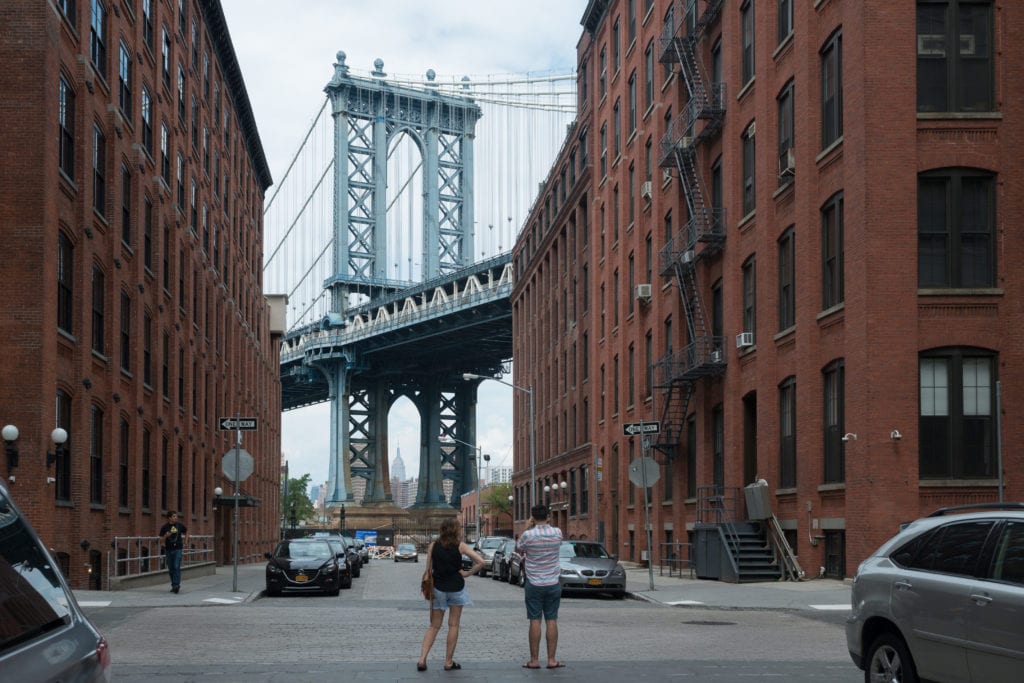 A big part of Washington Street belonged to the Trinity Church, but the street was given to the city in 1808. This street belongs to Manhattan today, having its northernmost end at the 14th Street in Meatpacking District. Manhattan Bridge is one of the more interesting places to visit.

Washington Street got its name to commemorate George Washington, the first President of the United States.

Washington Street is famous for the World Trade Center site, a complex of seven buildings in the Financial District. The Center was destroyed in 2001 during September 11 attacks.

A part of Washington Street used to inhabit Christian Arab immigrants. The stretch between Batter Place and Rector Street was called Little Syria, described as the “heart of New York’s Arab world” by The New York Times. 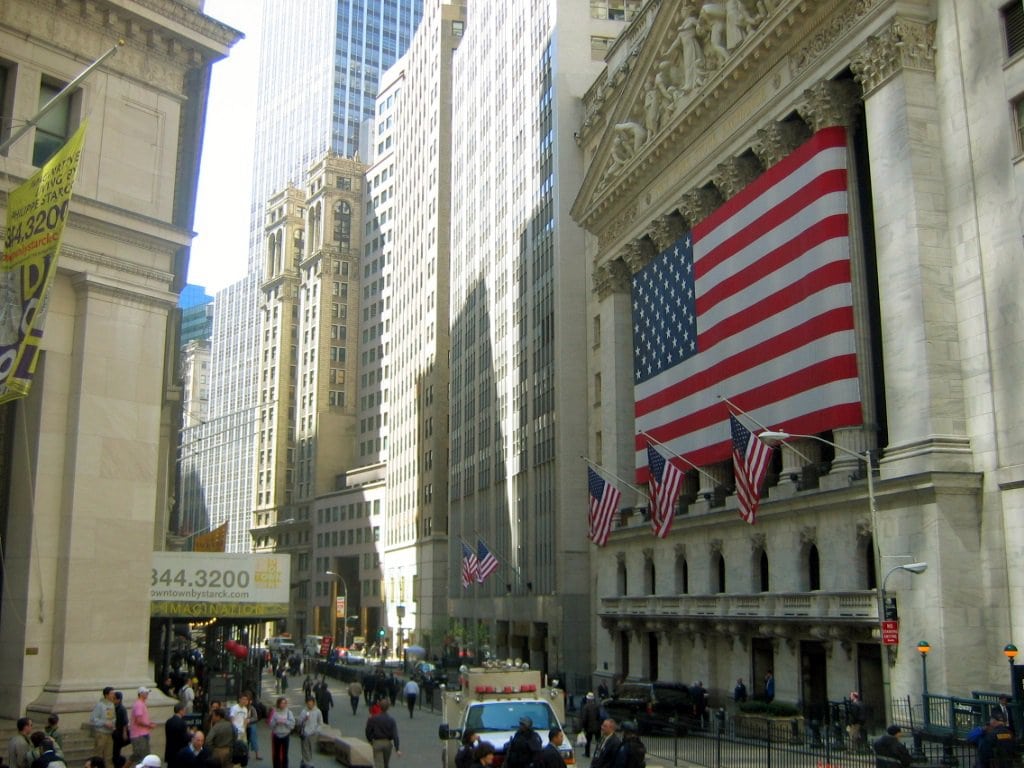 The most famous street in the most famous city in the United States is also one of the oldest streets to exist. Wall Street was the “de Waal Straat” wall at first built by the Dutch settlers of Manhattan Island, afraid of the English attack during the Anglo-Dutch Wars in 1652.

In 1711, the street was a slave market instead. But that changed soon after New York City became the first capital city of the United States.

In 1792, 24 stockbrokers had the first stock exchange meeting, marking it as the beginning of the “financial capital of the nation” as we know it today.

The street runs for eight blocks in Lower Manhattan. The most infamous moment on Wall Street was the stock market crash in 1929. Many people lost their jobs and lives, the event being the prelude to the Great Depression until 1939. 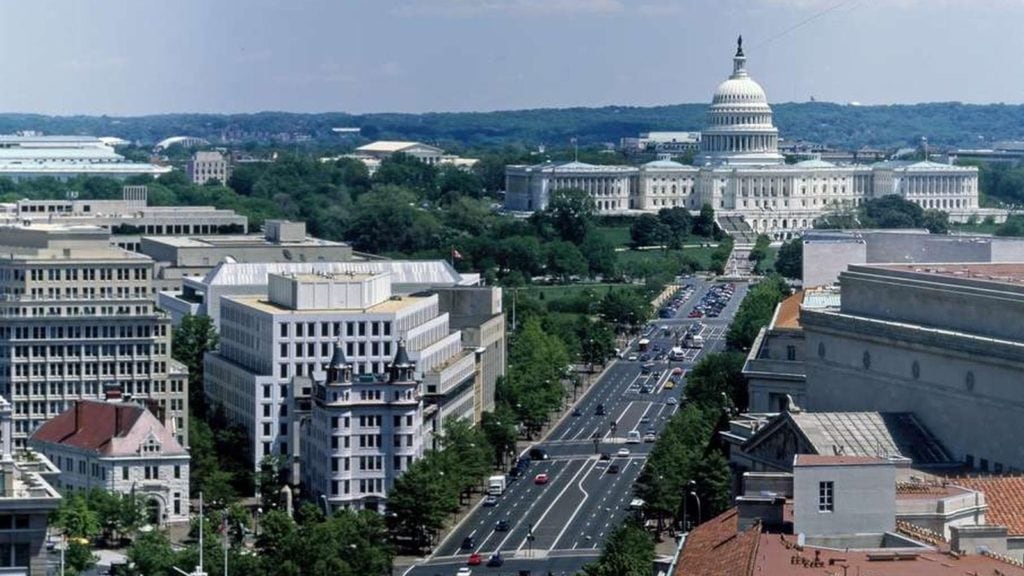 Thomas Jefferson was the first to recognize Pennsylvania Avenue as a street in 1791. One of the earliest streets constructed in the Federal City, this avenue is said to be a consolation prize for moving the capital from Philadelphia to Washington.

The most important part of the street connects the White House and the United State Capitol building, running for 35 miles in complete.

Avenue was constructed by a French-American military engineer Pierre Charles L’Enfant, who designed the L’Enfant Plan (1791), an urban plan for Washington, D.C.

People mocked Pennsylvania Avenue for being too wide, so they tried to tame it with macadam paving in 1832. But soon after that, they installed cobblestones followed by wooden blocks until 1876, when asphalt paving was finally laid. 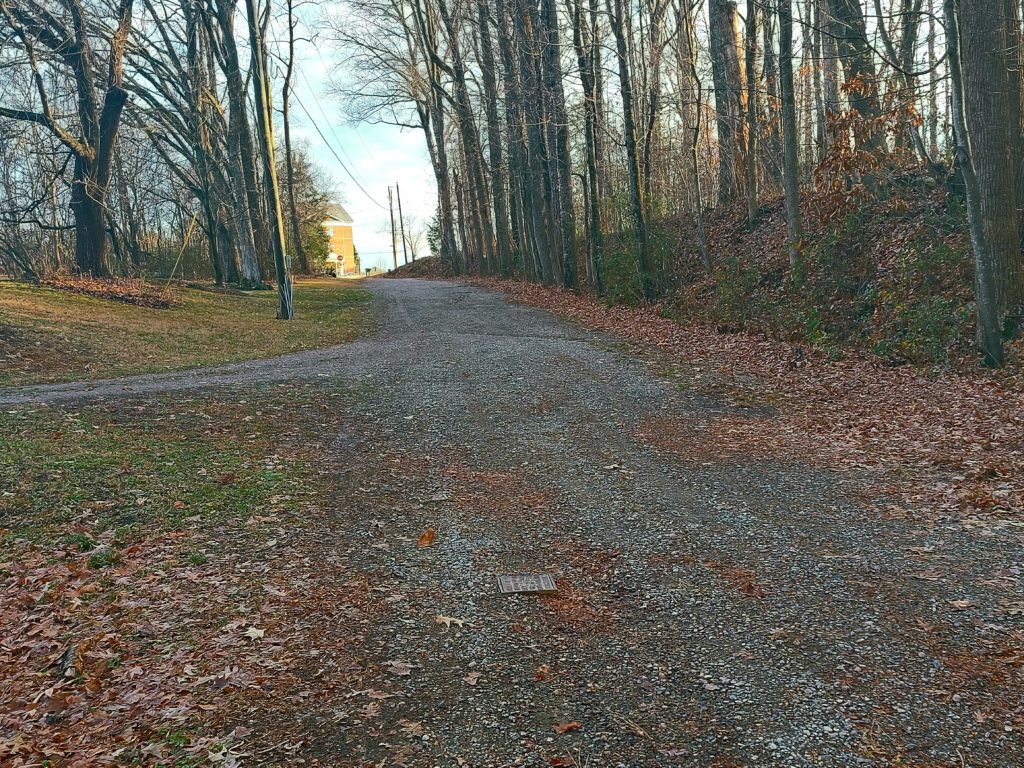 Also called the Three Chopt Road, The Three Notch’d was a colonial-era route across central Virginia from the 1730s. The road got its name from the three trees cut to make a path through the forest. The street is called West Main Street today and is a part of University Avenue.

A colonial law from 1704 says that roads that lead to any County Courthouse should have two notches of trees on both sides, and any path spreading from the main road should have three instead. Three Notch’d didn’t lead to anything of the sort, so the original purpose of this street is unknown.

Besides this road, there are two other roads named Three Notch in the United States. The first is the oldest road in Missouri, leading to St. Genevieve, and the second is a part of Highway 39 in Seminole County in Georgia, Highway 39, built in 1814. 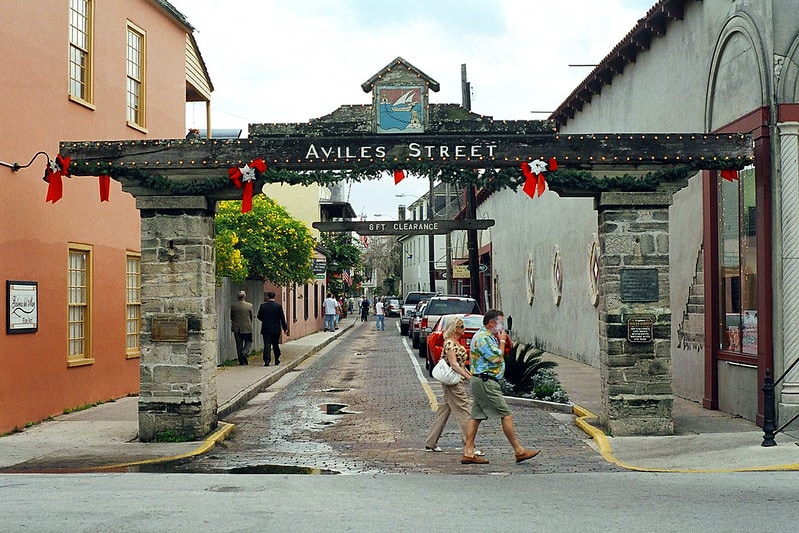 Aviles Street in St. Augustine could be the oldest street in the United States, but not much of its history is recorded.

Archaeologists had found pottery shards from the early 1600s by digging a couple of layers under the brick paving, but other than this, the street’s origins are unknown.

The street is also known as the city’s oldest artist district, dating back to the 1930s when an old hardware warehouse was transformed into gallery spaces for different artists. Today, Aviles is bustling with museums, art houses, and restaurants with outdoor dining.

St. Augustine is famous for being the oldest continuously inhabited city in the United States since 1565. The city is known for the famous Bridge of Lions, the Lightner Museum, and Ponce de Leon’s Fountain of Youth, an attraction since 1868.

Bourbon Street is called the heart of the French Quarter in New Orleans. The street extends for thirteen blocks, famous for many bars and clubs.

One of New Orleans’ oldest restaurants, Galatoire’s Restaurant, is on Bourbon Street, as well as The Royal Sonesta Hotel, dating back to when the city was founded.

The royal engineer Adrien de Pauger designed the city’s layout in 1721, naming the streets after French royal houses. The name of Bourbon Street comes from the House of Bourbon, a French dynasty that ruled France in the 16th century.

New Orleans was founded in 1718 by a French colonial administrator Jean-Baptiste Le Moyne de Bienville. He is known as the “Father of Louisiana” as he explored the Mississippi River Valley at the end of the 17th century, establishing the first French settlement in Louisiana. 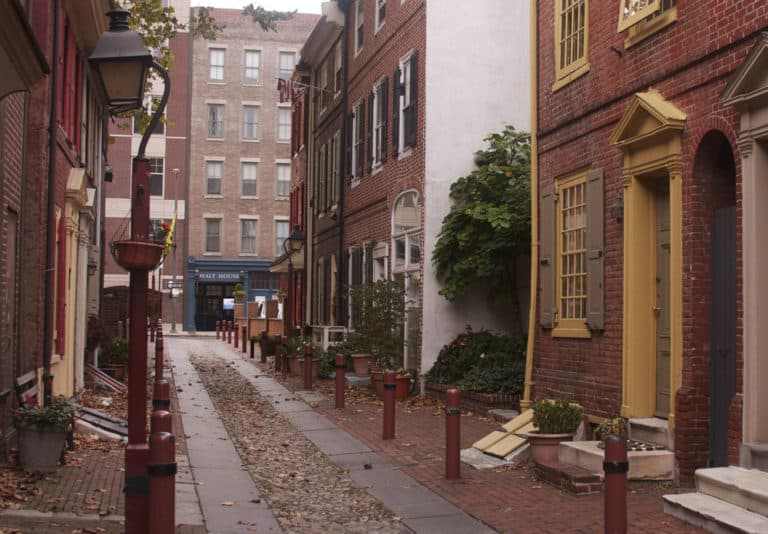 “Our nation’s oldest residential street” is Elfreth’s Alley, located in the Old City neighborhood in Philadelphia. This street dates to 1703, with the first built houses dating between 1703 and 1836. – It includes 32 houses, and The Elfreth’s Alley Museum opened in the 1960s.

Most of the houses were built as so-called Trinity houses, smaller in size, with three of four vertically stacked floors. Two adjacent houses, developed in 1755, were turned into a museum popular with visitors.

The street has been preserved as a Nation Historic Landmark since 1996.

Elfreth’s Alley is named after Jeremiah Elfreth, a blacksmith from the 18th century. Merchants needed a place close to the ports for their goods, so they started renting and buying properties close to the river. The street used to be populated by mostly tradesmen, pewter and silver smiths, and glassblowers. 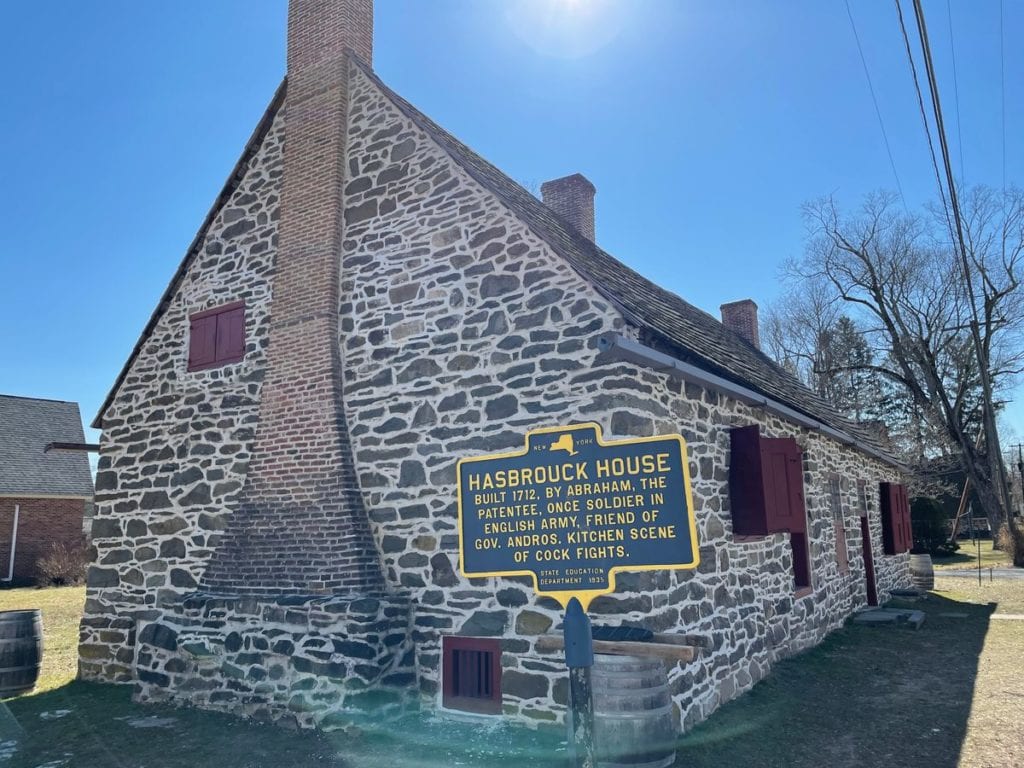 The oldest street in the United States is Huguenot Street , dating back to the end of the 17th century. This street gets its name from the Huguenots, French Protestants who fled France to escape warfare between Protestants and Catholics, settling in upstate New York.

The seven stone houses were included as a National Historic Landmark in 1960. All of the individual houses have names based on the owner’s families.

The Jean Hasbrouck House is one of the main points of visitor tours because it belonged to the founder of New Paltz.

New Paltz is in southeastern New York, on the Wallkill River. The town got its name from the European refuge Rhenish Palatinate, Pfalz in German. Huguenots are today a minority, and their descendants can be found in France, and the United States, especially in South Carolina and Virginia.