Chicago is known for its vibrant culture, exciting attractions, and beautiful architecture. Still, not many know that it is also home to some of the oldest hotels in the United States.

From iconic properties built in the late 1800s to contemporary downtown gems, these historic hotels offer a unique glimpse into Chicago’s past.

For a truly unique experience, explore the 10 oldest hotels in Chicago. From the Sauganash Hotel, which opened in 1833, to the 21c Museum Hotel Chicago by MGallery, built in 1910, each of these iconic establishments has its unique history and story. These hotels are a window into Chicago’s past and proud history, from the luxurious lobbies to the historic suites.

With so much to experience, these hotels are the perfect way to enjoy the city’s past and present. So, see why Chicago is home to some of the oldest hotels in the United States. 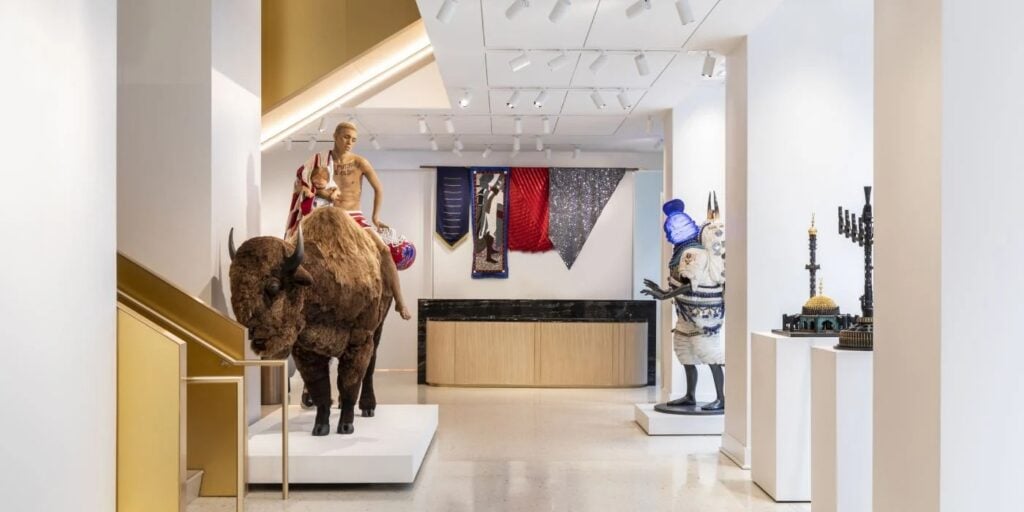 In 1927, the 21c Museum Hotel Chicago by MGallery, then known as the McCormick Hotel, opened its doors in the River North neighborhood of Chicago.

This luxury boutique hotel was a stunning edifice built with the help of noted local architect Edmund J. Meles, who had designed grand hotels for both short-term and long-term stays.

Despite its success, the hotel went into a state of decline after World War II and was slated for demolition.

However, the site was saved in 1984 when the Hayman Company invested $20 million in restoration. Today, the 21c Museum Hotel Chicago by MGallery is a vibrant, art-filled boutique hotel offering an elegant and immersive stay in the Windy City.

It was subsequently relaunched as the “Lenox House” before finally being integrated into the 21c Museum Hotels brand. 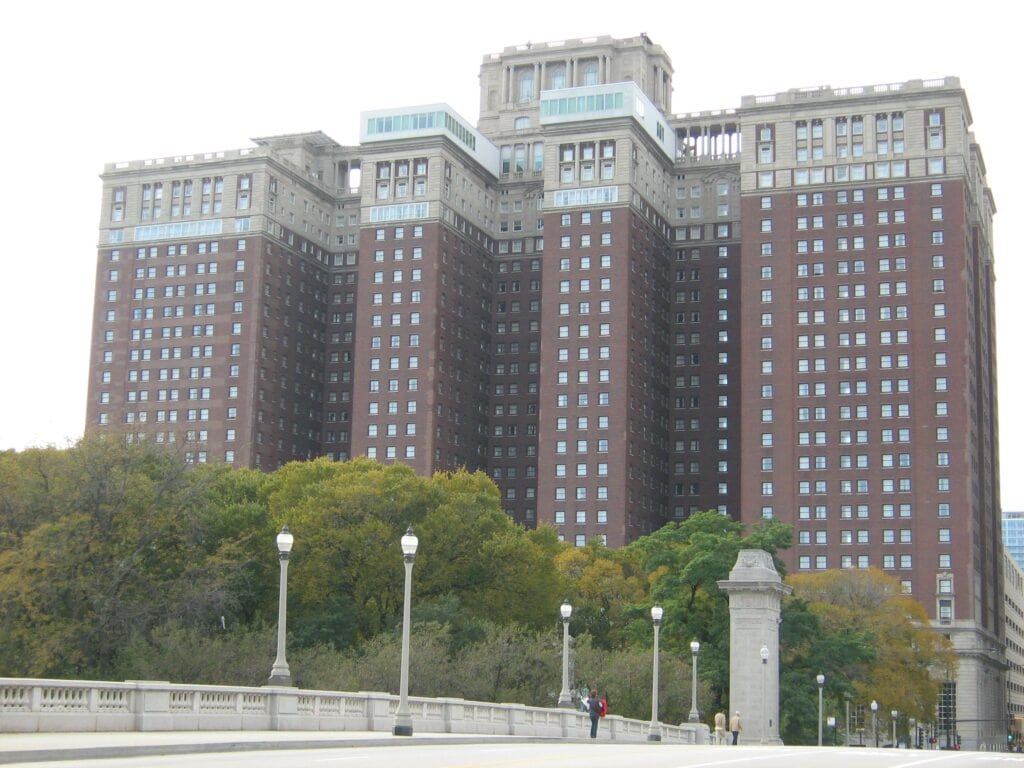 The Hilton Chicago is a centrally-located luxury hotel in Chicago, Illinois, United States. The hotel has had a dynamic history and has since maintained the hotel’s classic integrity with all modern amenities. The hotel is a Chicago landmark that overlooks Grant Park and offers guests spectacular views of the city. Building Description.

Discover Hilton Chicago, combining a contemporary design and exciting atmosphere within this iconic Chicago hotel. Guests can enjoy various amenities, such as an indoor pool, a full-service salon, a bar and lounge, and a world-class fitness center.

Celebrating 95 years, The Hilton Chicago hotel opened its doors in 1927 and has served as one of the city’s most revered addresses ever since.

It was first opened as the Stevens Hotel and was later changed. 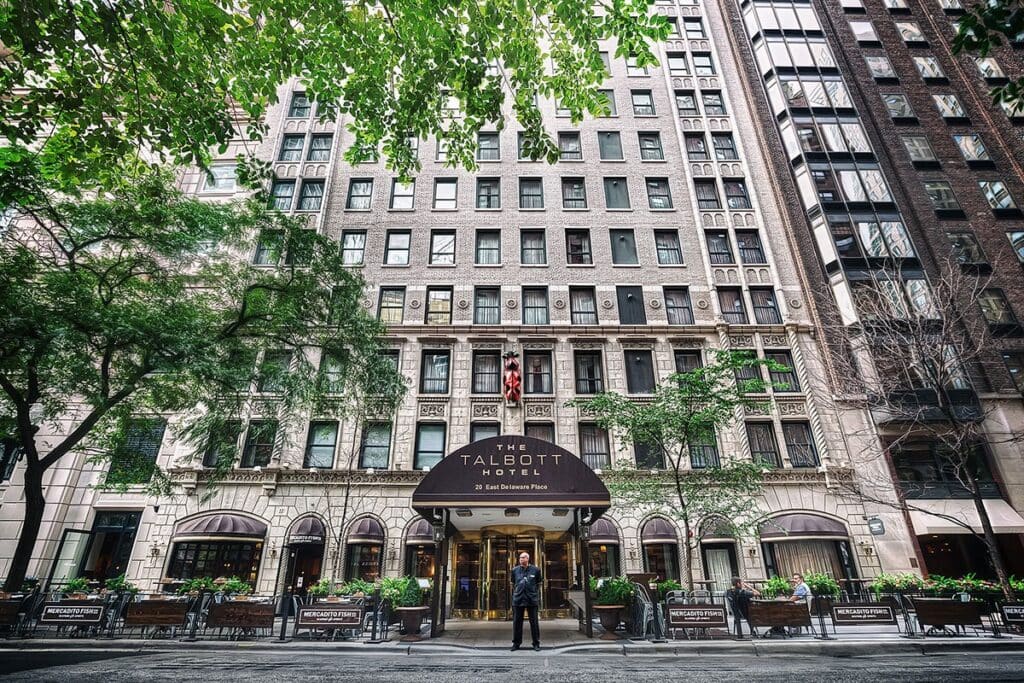 The Talbott Hotel has been a fixture in Chicago’s Gold Coast neighborhood since 1927. The firm of Marshall and Fox designed the Italian Renaissance-style building, and it soon became one of Chicago’s premier hotels. The property recently underwent a major renovation yet still retains its historic charm.

The Talbott offers guests a variety of luxurious amenities, such as complimentary Wi-Fi, a 24-hour fitness center, a full-service bar and lounge, and a library. In addition, the hotel is conveniently located close to Navy Pier, the Magnificent Mile, and other popular attractions.

Whether traveling for business or pleasure, The Talbott Hotel provides a unique experience for your stay in Chicago.

Guests can also enjoy a complimentary continental breakfast each morning. 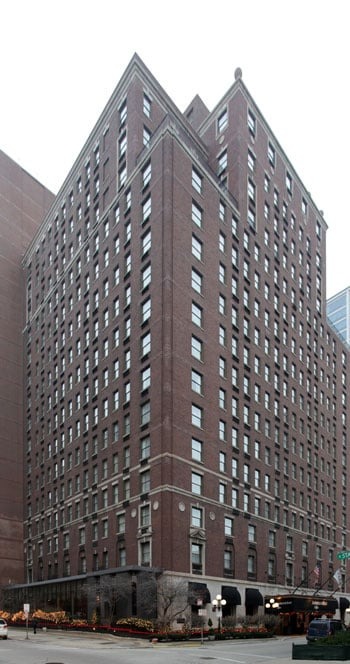 Ambassador Chicago, previously known as the Ambassador East, is a historic hotel in Chicago, established in 1926. In their heyday, both the hotel and its iconic restaurant, The Pump Room, were frequented by celebrities.

Located in the heart of the Gold Coast, the iconic property has hosted the who’s who of the 20th and 21st centuries and has served as a local beacon to many of the city’s most influential figures.

With a rich history rooted in Chicago’s Jazz Age, Ambassador Chicago is the city’s original boutique hotel and has been featured in numerous films, such as North by Northwest. In 2010, Ian Schrager purchased the property, which was renovated and reopened as the PUBLIC Chicago in 2011.

In 2017, the hotel was sold and renamed Ambassador Chicago and has since joined Hyatt’s Joie de Vivre Hotels brand. 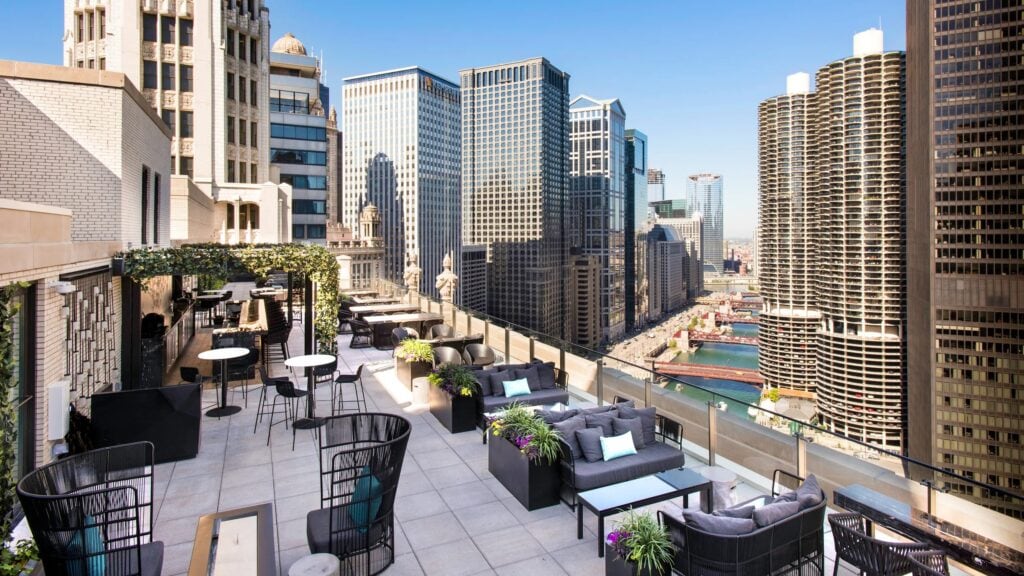 LondonHouse Chicago is a luxury lifestyle hotel located in the heart of downtown Chicago. The hotel is a transformation of the historic London Guarantee and Accident building, which was built in 1923 and is considered one of the “Big Four” skyscrapers surrounding the Michigan Avenue bridge at the Chicago River.

At LondonHouse, guests can experience unrivaled city views through each window in every direction. LondonHouse Chicago was acquired in 2013 by Chicago-based developer Oxford Capital Group, LLC, and has quickly become a premiere destination in the city. 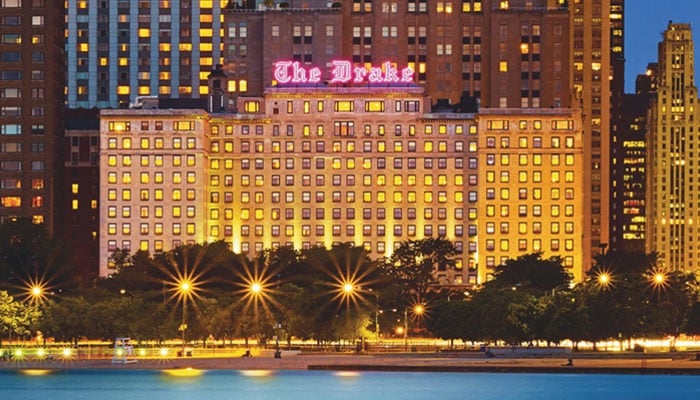 The Drake Hotel is a historic luxury hotel in Chicago, Illinois, dating back to 1920. Featuring stunning views of Lake Michigan, the Chicago Drake hotel is a 3-minute walk from Oak Street Beach and 1 mile from Navy Pier. The doors of The Drake Hotel opened on New Year’s Eve the following year to 2,000 of Chicago’s most distinguished citizens.

Throughout the roaring twenties, The Drake became high society’s first choice in luxury. In 1932 the Cape Cod Room became Chicago’s first choice for fresh fish and seafood and the nation’s first themed restaurant.

On December 6th, 1933, the day after prohibition was repealed, Coq d’Or opened to the favor of thirsty patrons eager to purchase a 40-cent whiskey. Then, in 1940, The Drake sign was illuminated, solidifying the hotel’s rightful place in the most internationally recognized skyline.

In 1980 Hilton International acquired The Drake Hotel and restored it to its former glory. As a result, the Drake Hotel guests see today provide the grandeur of the past and accommodations fitting for today’s high society.

Conceptualized by famed architect Benjamin Howard Marshall, The Drake Hotel came to fruition when John B. Drake and Tracy Corey Drake financed the project in 1919. 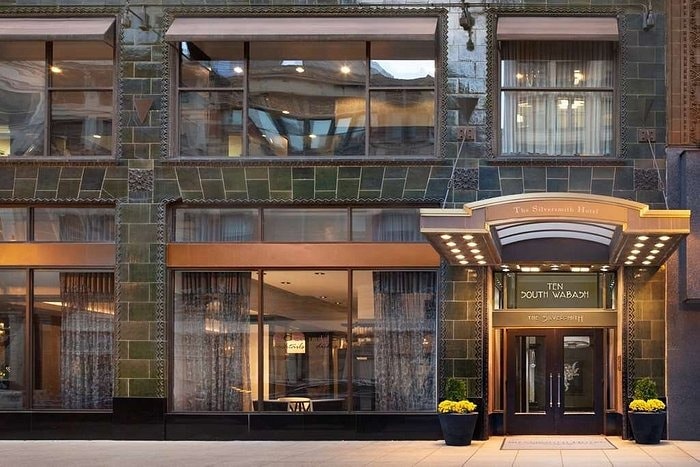 The Chicago Silversmith Hotel & Suites is a luxurious boutique hotel tucked into the heart of Downtown Chicago on Jewelers Row. Established in 1897 by Peter J. Weber, this hotel blends historic architecture with modern amenities and offers various services and accommodations.

The hotel is also conveniently located near the Chicago Loop, with numerous restaurants, museums, arts venues, and shopping nearby.

Whether you’re looking for a relaxing getaway or a business trip, the Chicago Silversmith Hotel & Suites offers something for everyone. With its prime location, exemplary service, and contemporary luxury, the Silversmith Hotel has become a rare gem in the Windy City and continues to provide guests with an unforgettable experience. 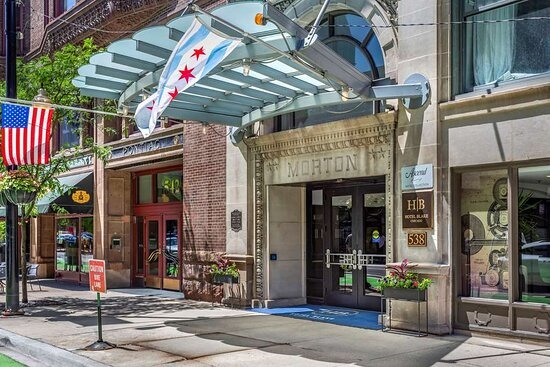 Hotel Blake was established in 1886 and continues to provide guests with an unforgettable experience. Guests will enjoy personalized service and a quaint and welcoming vibe near the city’s top attractions and things to do.

Guests can explore the city by visiting the nearby Grant Park and Millennium Park or take advantage of the 19 restaurants within a mile of the hotel.

With its historic charm and modern amenities, Hotel Blake is the perfect place to experience the best of Chicago. Today, the space gets a second life as a premier Chicago luxury hotel along the historic Printer’s Row.

Hotel Blake is a boutique hotel in the heart of downtown Chicago, previously home to the 19th-century Morton Building. 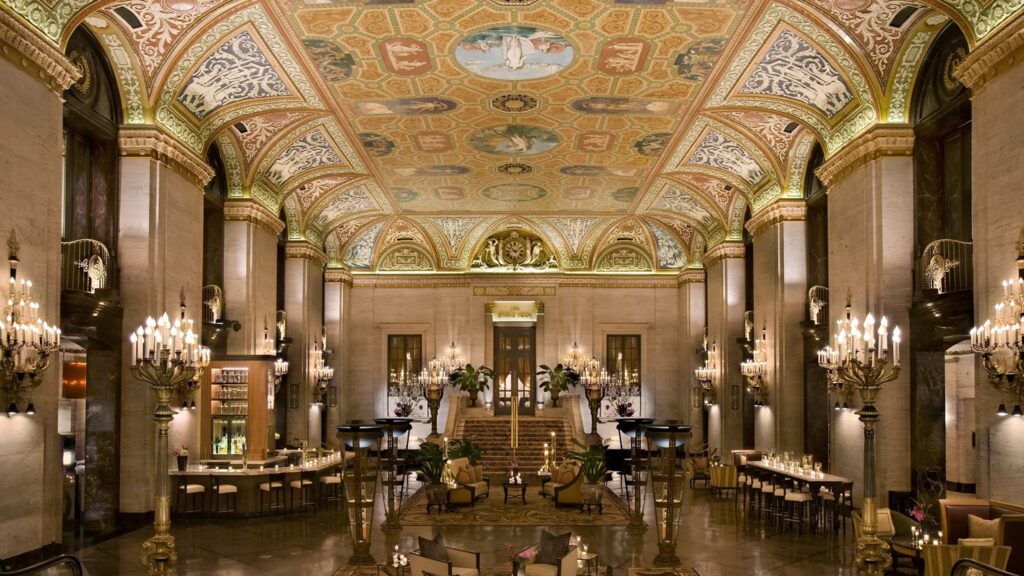 The Palmer House – A Hilton Hotel is a historic hotel in Chicago, Illinois. It was built in 1871 by Potter Palmer as a wedding gift for his bride Bertha Honoré and is the oldest operating hotel in the city. The hotel is renowned for its iconic lobby and grand ballrooms, as well as its luxurious suites and spacious guest rooms.

The Palmer House has welcomed many famous guests, including every president since Ulysses S. Grant and numerous world leaders, celebrities, and Chicago’s movers and shakers. In addition, the hotel became a showplace in 1933 with the World’s Fair and its many entertainers.

Today, the Palmer House is a spectacular hotel that retains its historic charm and elegance. Visitors can experience the hotel’s remarkable history and luxurious amenities.

In 1945, Conrad Hilton purchased the Palmer House, which has since undergone numerous renovations and expansions. 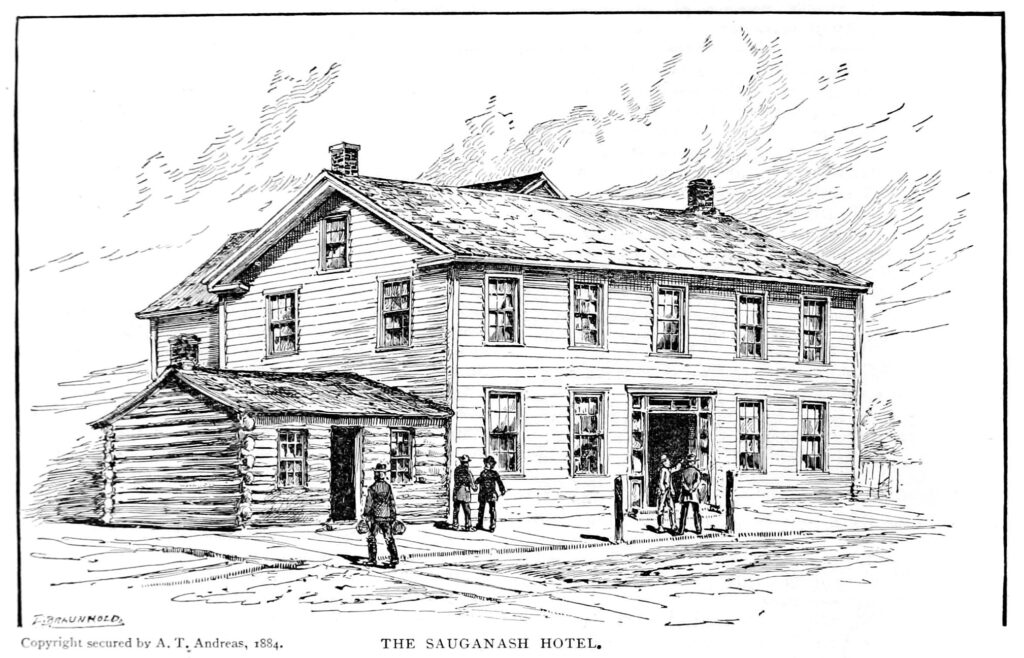 The Sauganash Hotel is the oldest hotel in Chicago. It was built in 1833 by Mark Beaubien at Wolf Point and is the first hotel in the city.

The Sauganash Hotel is an integral part of Chicago’s history as it was the first frame house in the city, and it served as a popular destination for travelers.

Today, the Sauganash Hotel is remembered for its historical significance and contribution to the city’s past. The hotel is a reminder of the city’s rich history and its impact on the development of Chicago. Visitors to the hotel can explore the property and stay in the rooms to get an authentic feel of what life was like in the 1800s.

The Sauganash Hotel is a great way to experience the past and learn about the city’s history.

The hotel was originally a tavern and hotel until it was destroyed by fire in 1851. 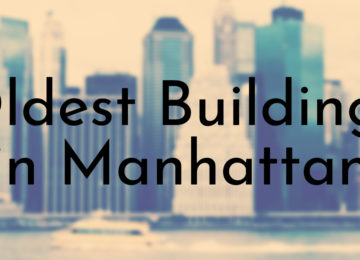 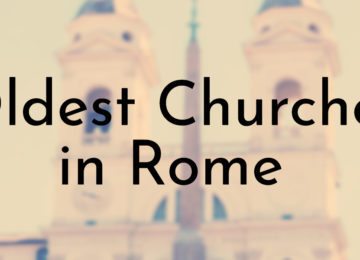 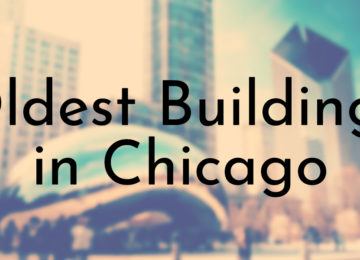