Quarterbacking in the NFL is perhaps one of the hardest thing to do in professional sports. To perform at the elite level, you must have the keen and unique ability to multi-task under pressure with 350-pound linemen charging you at full speed, ready to bring you to the turf. Making quick decisions and the right reads on the fly is so difficult that it demands more than skill. It requires months of game planning, film study, and simulated schemes in practice.

Typically, we see the more savvy veteran quarterbacks excelling in the role. That’s thanks to a concoction of experience, age, and the confidence that comes with it. However, there are always outliers in every sport that redefine the norms and amaze us with what’s possible.

That’s why we’ll be looking at the youngest quarterbacks that have ever played in the NFL! 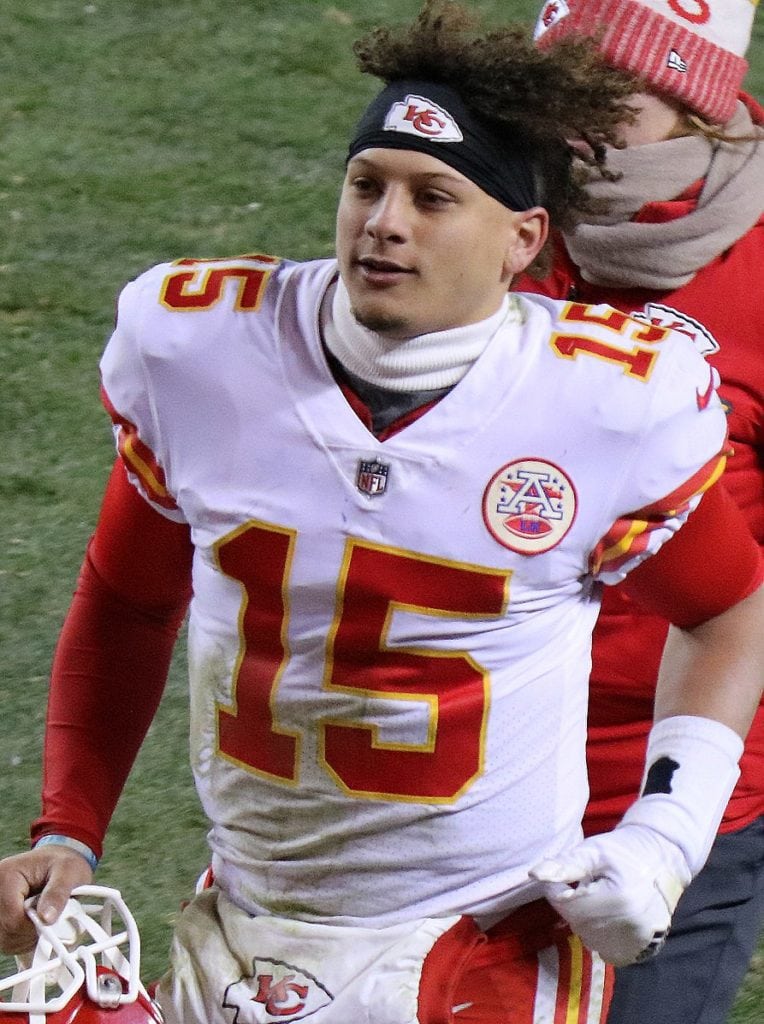 Patrick Mahomes was the 10th pick in the first round of the 2017 NFL Draft. He made his debut for the Kansas City Chiefs at just 22-years-old! Since then, his career has far surpassed the expectations even for a first-round pick. He is a Super Bowl champion (LIV) and the Super Bowl MVP.

His accomplishments speak for themselves, but in case you were wondering how a team could justify signing him to a 10-year contract extension worth $477 million, including a $26 million incentive in bonuses, then let’s rattle a few off. He is the NFL MVP of 2018, first-team All-Pro, and a 3x Pro-Bowl selectee. By the way, he’s only 26.

Mahomes is the son of former Major League Baseball pitcher Pat Mahomes. Now we know where he gets that golden arm! 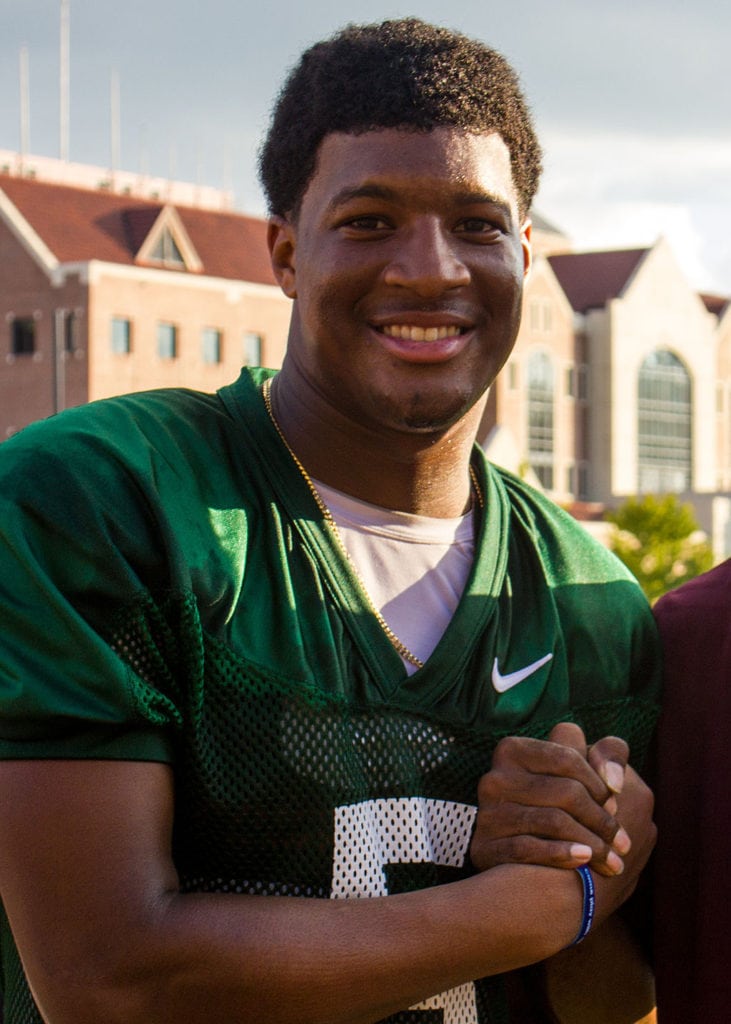 Jameis Winston was the first pick of the first round in the 2015 NFL Draft. Drafted by the Tampa Bay Buccaneers, Winston was thrust into the spotlight and expected to carry the weight and the hopes of an entire franchise on his shoulders at 21-years-old.

In his debut, he threw two touchdowns and two interceptions that culminated in a loss against the Tennessee Titans. Jameis Winston traded to the New Orleans Saints in 2020. He’s still active in the league at 27-years-old and is looking to reinvigorate his already impressive career with the Saints organization.

Winston set several franchise records for the Buccaneers and earned Pro Bowl honors. He also led the league in passing yards during the 2019 season. Since Drew Brees retired as starting QB for the New Orleans Saints, Winston has assumed starting duties for the 2021 season. 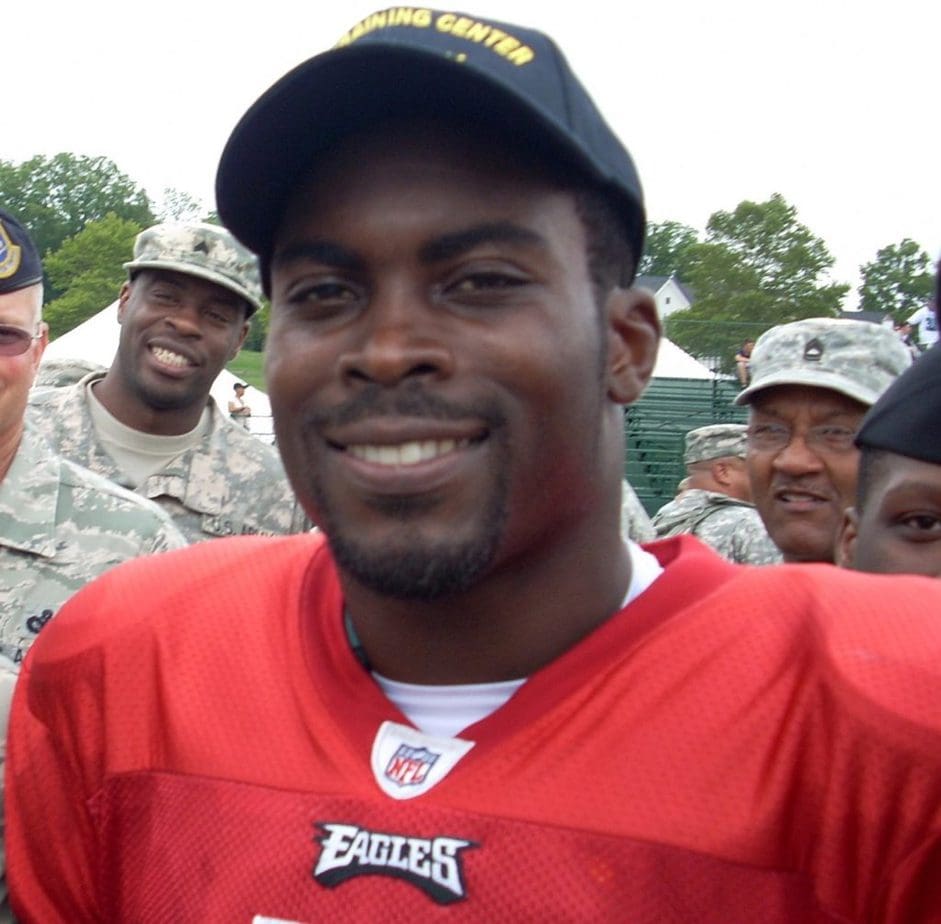 Michael Vick was the first pick in the first round of the 2001 NFL Draft. He started his season opener at 21-years-old for the Atlanta Falcons in a season opener against the Dallas Cowboys in 2001. Vick impressed and helped make the case to justify his place as a No. 1 pick by throwing for one TD and logging no interceptions en route to a victory.

Vick stayed with the team until 2008. After, he then bounced around as a journeyman, finally ending his 13-year career with 133 touchdowns and 88 interceptions.

Following the massive hit to his reputation as a result of his dog-fighting scandal, Vick made a return and earned the NFL Comeback Player of the Year award in 2010. He is a 4x Pro-Bowl selection. 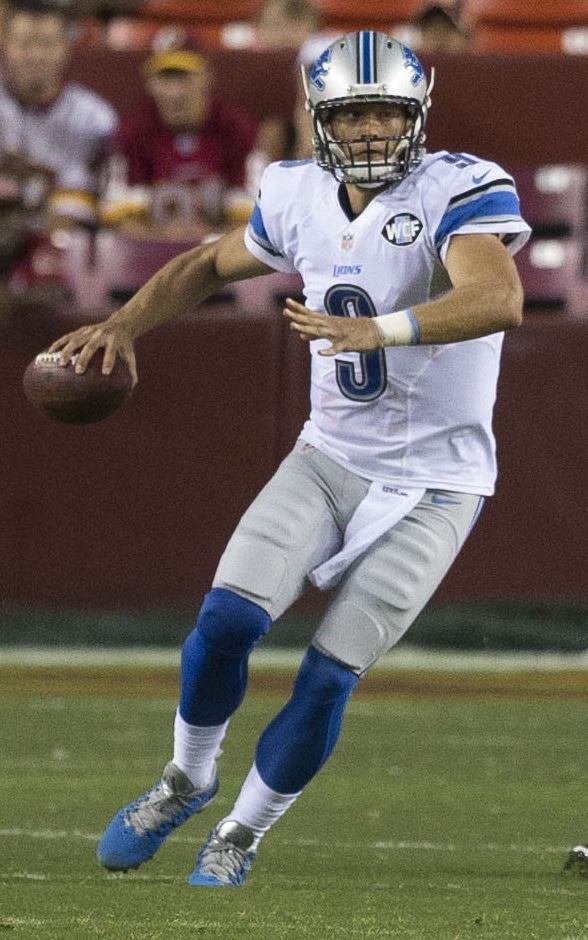 Matthew Stafford was the first pick in the first round of the 2009 NFL Draft. He started his season opener against the New Orleans Saints in 2009 at 21-years-old. He lost his debut game but has since had a solid career as a Pro-Bowl selection in 2014 and the current quarterback for the Los Angeles Rams.

Stafford holds the record as the fastest player to reach 20,000 career passing yards. It took him just 71 games. Riding the momentum of that incredible achievement, he became the first to 30k, 40k, and 45k passing yards.

Several expert analysts, scouts, and former players correctly predicted Stafford would go No. 1 in the NFL Draft before he played a college game because of his fearless play style and natural ability to lead. 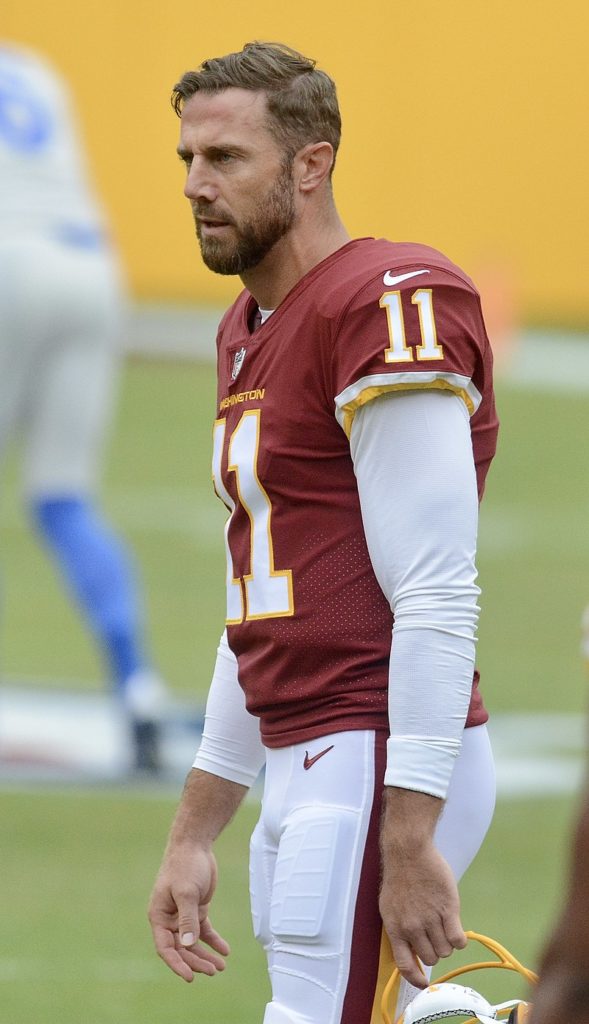 Alex Smith was yet another first-round pick in the first round of the 2005 draft. He made his debut for the San Francisco 49ers in the season opener against the Indianapolis Colts. He had an 8.5 passer rating but it wasn’t enough to seal the victory. His career passer rating now looks a little better, to say the least, at 87.4.

Smith is a 3x Pro-Bowl selection and the NFL’s passer rating leader in 2017.

Alex Smith won the NFL Comeback Player of the Year award in 2020 and for an extraordinary reason. His comeback story is one for the record books, and you could argue that it was the most difficult to recover from. During his first season with Washington, he suffered a near-fatal injury to his right leg. It was so severe that it almost resulted in amputation. He was never expected to walk again, let alone play again professionally. 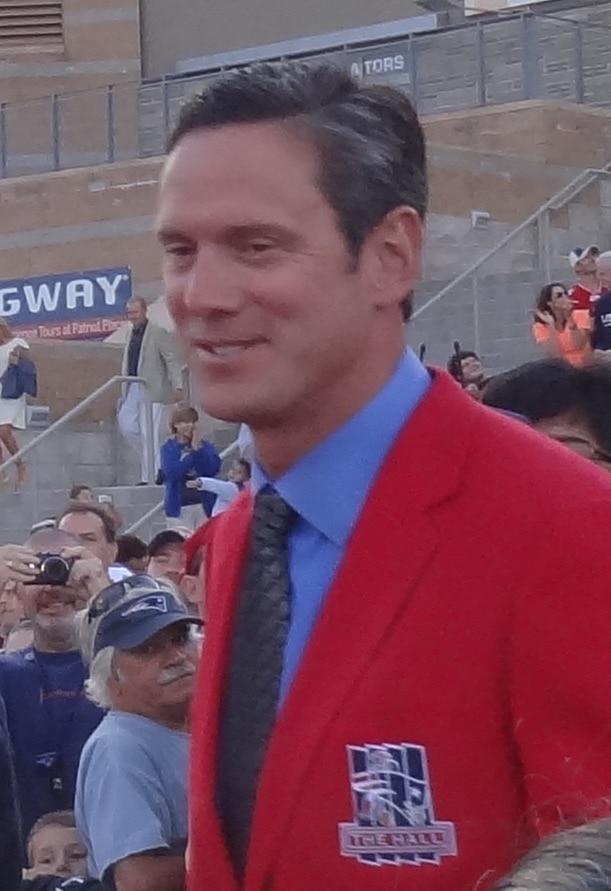 Drew Bledsoe was the first-round pick of the first round in the 1993 NFL Draft. By now, you must know the drill! Teams are always in need of a franchise cornerstone. In football, it always starts with the quarterback.

The New England Patriots rookie made his debut against the Buffalo Bills in 1993 at 21-years-old. He lost that first game, following the trend of many great quarterbacks that came before and will surely come after. All was forgiven when he won Super Bowl XXXVI for them and locked 4x Pro-Bowl appearances.

Upon his retirement in 2007, Bledsoe founded the Doubleback Winery. 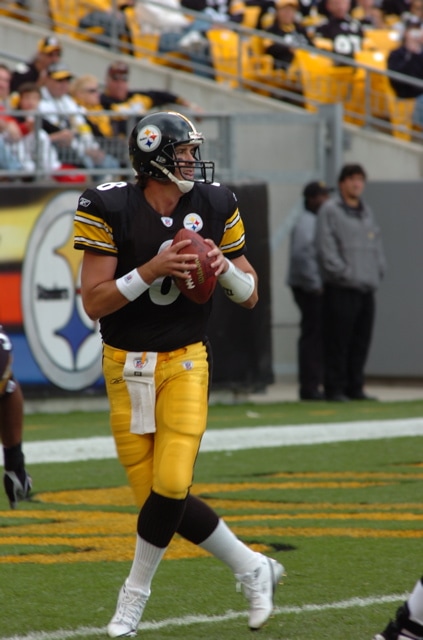 Tommy Maddox was the 25th pick in the first round of the 1992 NFL Draft. The Denver Broncos QB started his season opener against the rough-riding Oakland Raiders in 1992 and lost. Unsurprising considering the Raiders had a reputation for playing dirty and were unapologetic about it. It wasn’t an ideal introduction into the league for the young 21-year-old rookie.

Maddox is a Super Bowl XL champion and Comeback Player of the Year in 2002. His career history is extensive, and he’s bounced around seven teams in a career that began in 1992 and ended in 2005.

Maddox, an enthusiastic golfer, nearly qualified for the 2007 U.S. Open by scoring a 75. Four over par; three under par was the cutoff to qualify. 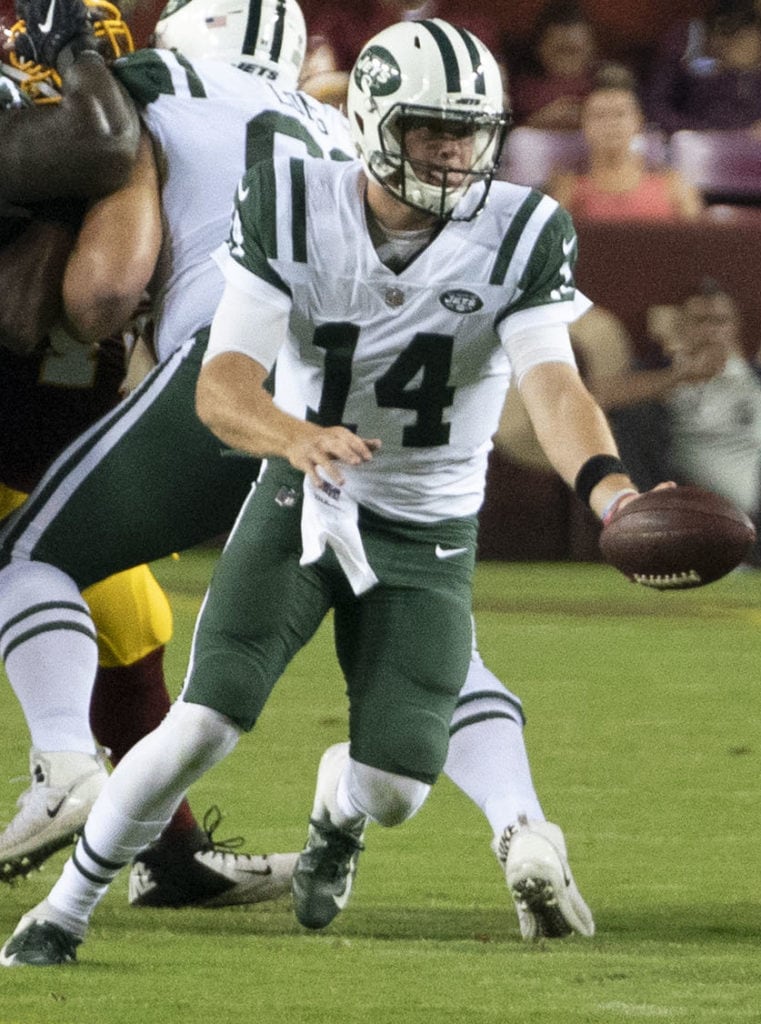 Sam Darnold is the youngest starting quarterback in the NFL!

Sam Darnold was the third pick in the first round of the 2018 NFL Draft. His debut for the New York Jets came at just 21-years-old against the Detroit Lions under the bright lights of Monday Night Football. Taken by the pressure of the stage, his first pass was an interception returned for a touchdown.

Despite the rocky start, Darnold showed a veteran’s composure by finishing strong with 198 passing yards and two touchdowns. He carried the Jets to a 48-17 victory.

Sam Darnold was traded to the Carolina Panthers on April 5, 2021. His first start for his new team came against his former team, where he threw for 279 passing yards in a 19-14 nail-biting victory. 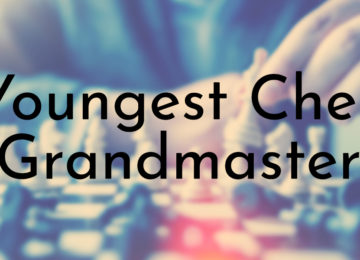 8 of the Youngest Chess Grandmasters in History

Posted by Lauren Johnson 0
Spread the loveChess is a game with a history so rich that it might even surprise the most staunch enthusiasts.…

Posted by Lauren Johnson 0
Spread the loveUnlike surfing, golf or even basketball, skateboarding is fairly recent—gaining traction in the 1970s and 80s and becoming… 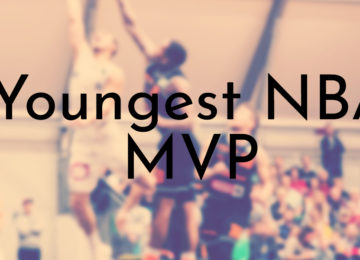