The NFL MVP award is easily one of the highest honors any player could hope to achieve during their career. The MVP award is prestigious because it signifies exceptional, record-breaking performance.

A panel of 50 sports writers decides who wins the MVP award every year at the end of the regular season. However, the award is only announced a day before the super bowl. Both individual and team performances are taken into consideration when deciding the winner. 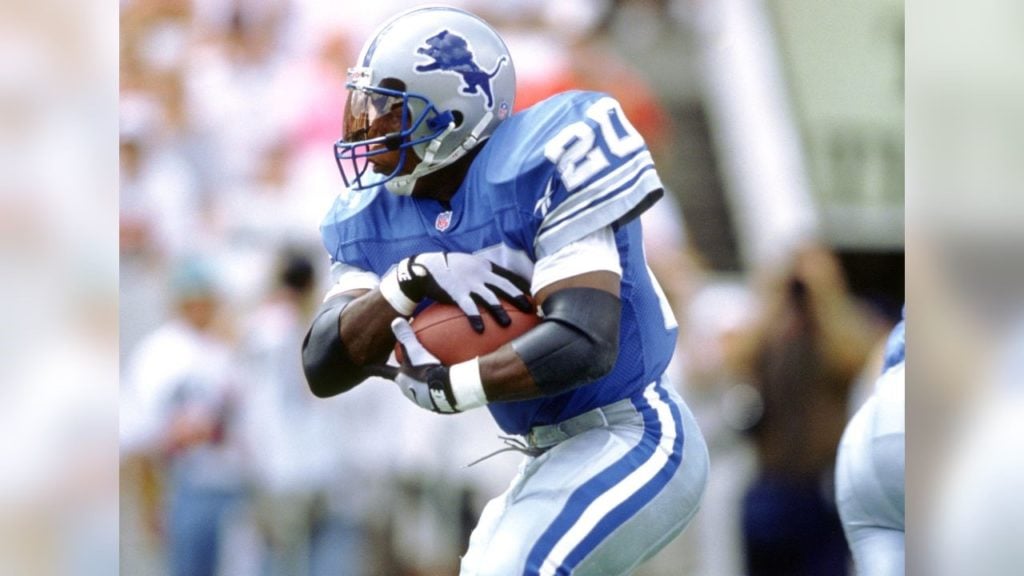 Barry Sanders comes in eighth on our list of youngest NFL MVP winners in the regular season.

Barry Sanders is considered by many to be a legend of the modern NFL era. His fast movement and quick turns have earned him great praise from friends and foes alike. His compelling movement on the field meant that teams were left franticly preparing for their next matchups.

More than just winning the MVP award, Barry Sanders had a huge impact on the game itself and for his team, the Detroit Lions, in the regular season. The fast, aggressive, and hefty running back dominated the 1997 season, where seemingly no quarterback had any answers to his antics.

Apart from being the eighth youngest NFL MVP winner, Barry Sanders is also the oldest RB in the NFL to have received this honor. Moreover, he is also among the very few to cross the 2000-yard threshold in a single season! 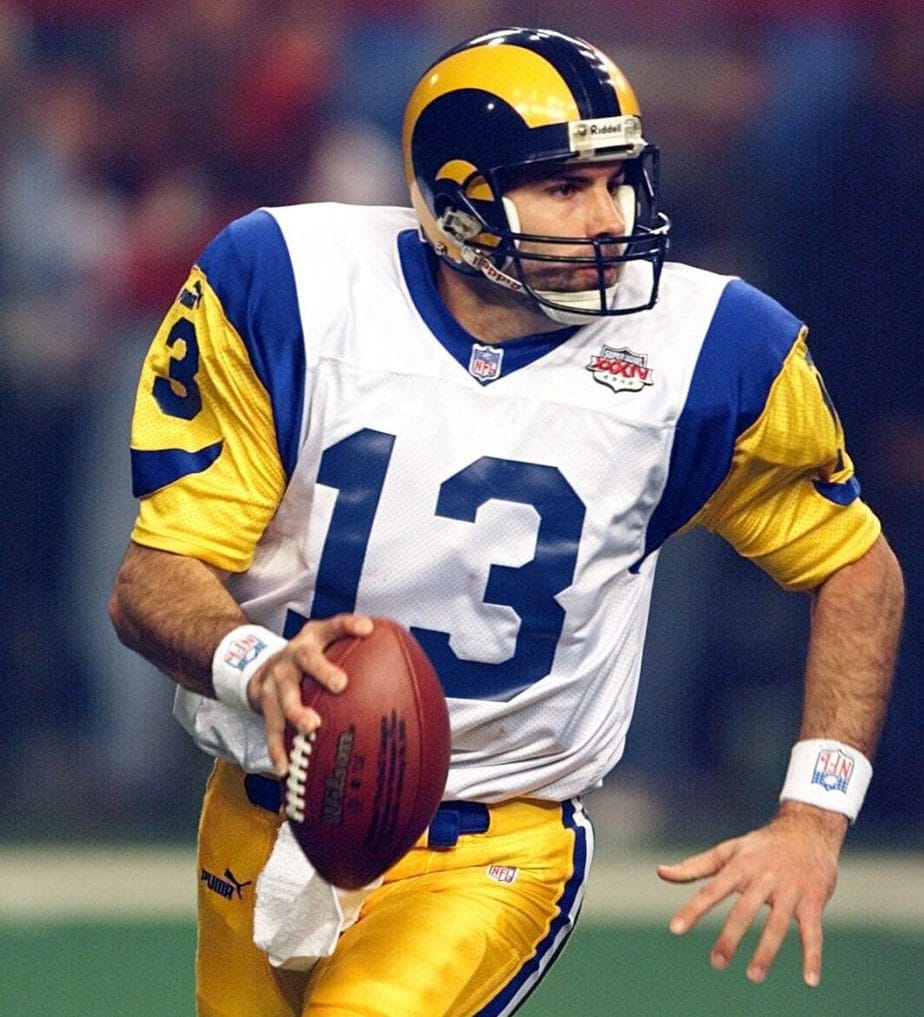 Kurt Warner takes the seventh spot on the list of youngest NFL MVP winners, sharing this honor with Shaun Alexander, who also won the MVP award at just 28.

While Kurt Warner shares his spot with another player, he was almost unparalleled during the 90s and the early 2000s. Kurt Warner was one of the very few quarterbacks in the NFL who could single-handedly change the game’s wind.

Kurt Warner’s brilliance is evident from the fact that he’s also the last player to lift both the MVP and the Lombardi Trophy in the same season!

Kurt Warner’s brilliance led his team, the St. Louis Rams, to their only Super Bowl victory in 1999. The interesting thing here is that Kurt was not even supposed to play the season in the first place, and was only brought on after Trent Green suffered an injury. 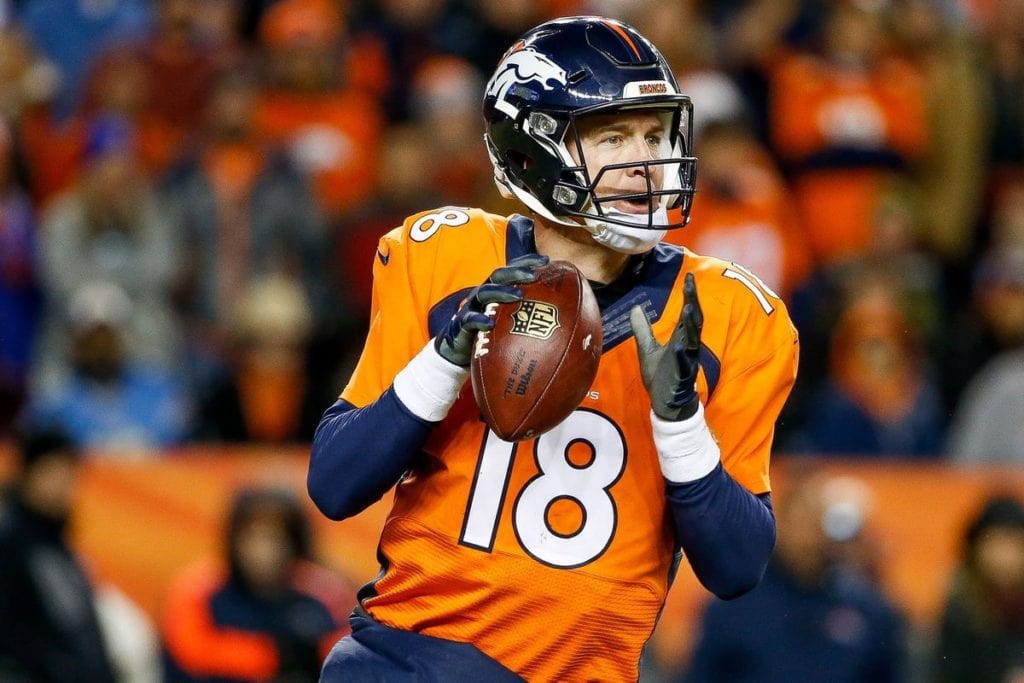 Peyton Manning, an undisputed legend in NFL history, is the one of the youngest NFL MVP award winners. However, the legendary quarterback is famous for more than just being a young MVP winner.

Manning has five NFL MVP awards to his name, and rightly so! The legendary quarterback was hailed “the greatest ever” to have played in the NFL at one time. His impact on the game, both on and off the field, has inspired many young players to follow in his footsteps.

While his first MVP award took him five years to achieve, it wouldn’t be wrong to say that the year 2003 marked the start of one of the best NFL careers the world has ever seen.

Besides having five MVP awards to his name, Peyton Manning is also the first to win these awards while playing for multiple teams. His first four awards came during his tenure with the Indianapolis Colts, while his last MVP award came when he played for the Denver Broncos. 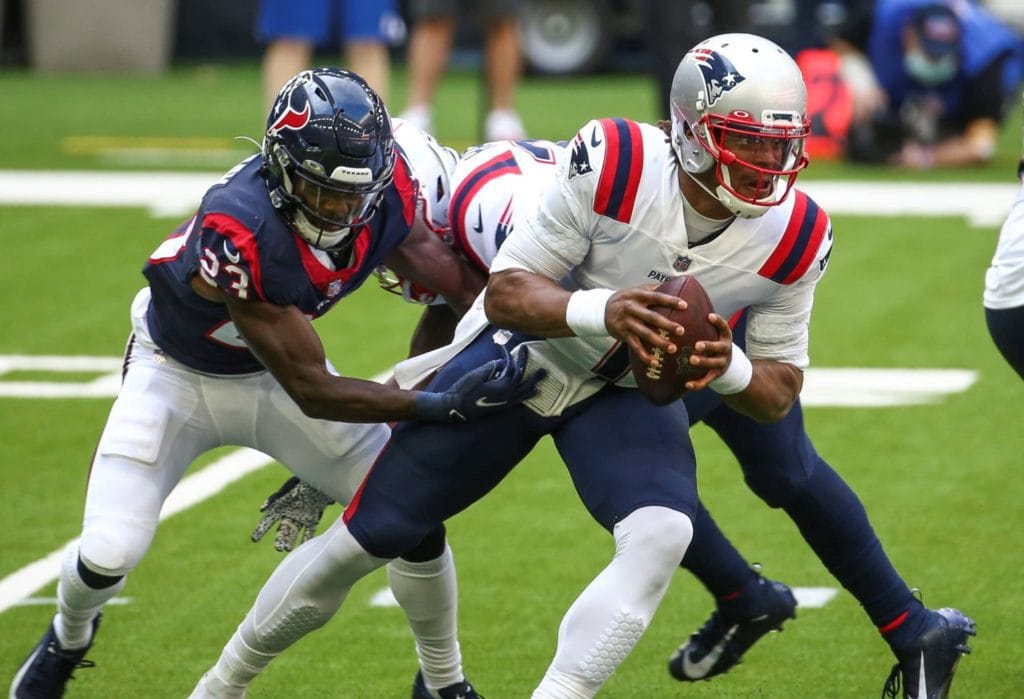 One of the best quarterbacks of the modern era, Cam Newton won his MVP award in the 2015 season. He won his MVP award following his career-best performance, which included six touchdowns – four passing and two rushing.

There is no debate that the 2015 season belonged to Cam Newton due to his exceptional display of perfectly executed tactics on the field. His swift movement and clever intuition left the opponents bewildered and frantically looking for a solution to his constant instigation.

No matter how good a player performs, the MVP awards are given based on team and individual performances. Critics believe that Cam Newton should have won his MVP award in 2015 by a much larger margin since the Panthers had an almost impenetrable defense – that is, until they met the Denver Broncos. 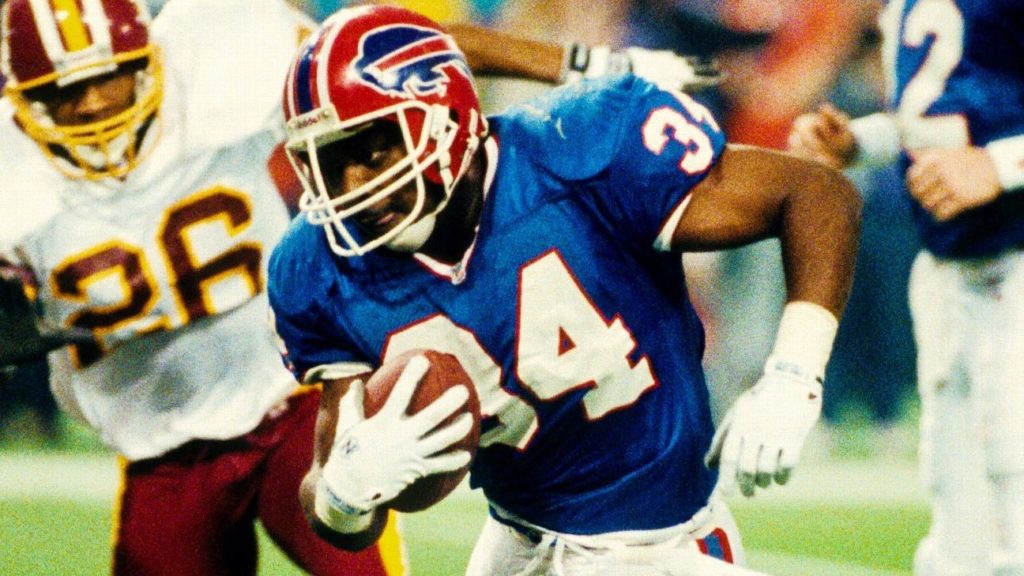 Thurman Thomas is also one of the very few running backs to have ever won this award. He is also among the legendary players who dominated the NFL during the 90s. His 1991 season performance was arguably his best, where he was absolutely unstoppable. Many game reviewers think that his performance in that season was the best displayed by any running back in the game.

Many fans remember Thurman Thomas as the tall, quick-witted RB who could change the entire course of the game single-handedly.

Thurman Thomas shares his fourth spot on the list of youngest NFL MVP winners with two other players: Marcus Allen with Las Vegas Riders in 1985 and Bert Jones with Indianapolis Colts in 1976. 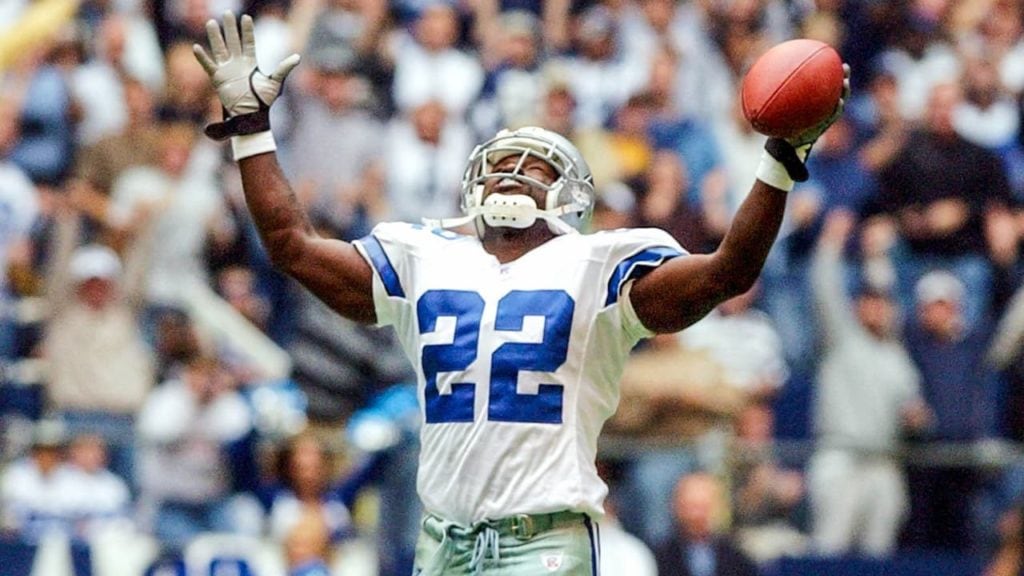 Another legendary RB in the NFL, Emmitt Smith, sits at the third spot among the youngest NFL MVP award winners.

Many critics consider Emmitt Smith the GOAT due to his exceptional records. Not only did Smith manage to win the prestigious award at the age of just 25, but he also managed to grab the MVP title for both the regular season and the Super Bowl in the same year!

If these achievements alone were not enough to justify his brilliance, here’s another fun fact: Emmitt Smith is the only running back in the Cowboys’ history to win the MVP award.

Many injuries threatened Emmitt Smith’s participation in the post-season of 1994. However, Smith convinced his coach to let him play, and made history in the Super Bowl after running 132 yards and scoring two touchdowns. 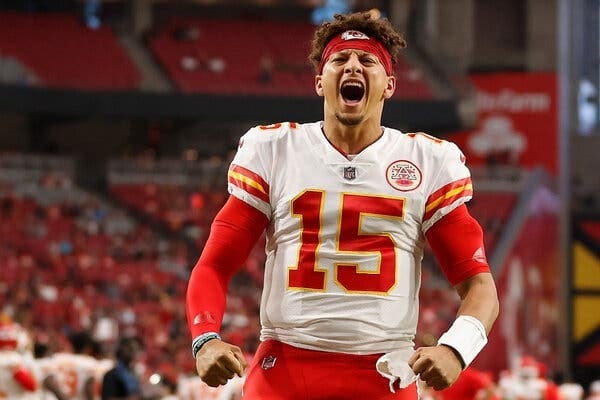 The second-youngest player to win the NFL MVP award is Patrick Mahomes. So far, Mahomes has led the Chiefs to a total of three Super Bowls.

Patrick Mahomes is undoubtedly one of the best young players of the modern era. Mahomes won the MVP award at the age of just 23 in 2018. Due to his excellent playmaking abilities and outrageous movement on the field, Patrick Mahomes is already being compared to the game’s legends, like Tom Brady and Peyton Manning.

Many critics believe that Mahomes will eventually become one of the best NFL players to have ever played, and his career so far demonstrates exactly that.

While Patrick Mahomes has become one of the best quarterbacks in the NFL, his athletic career did not start with his current professional sport. Mahomes used to be a baseball player before he was part of the NFL, and it seems like his baseball training is now coming in handy! 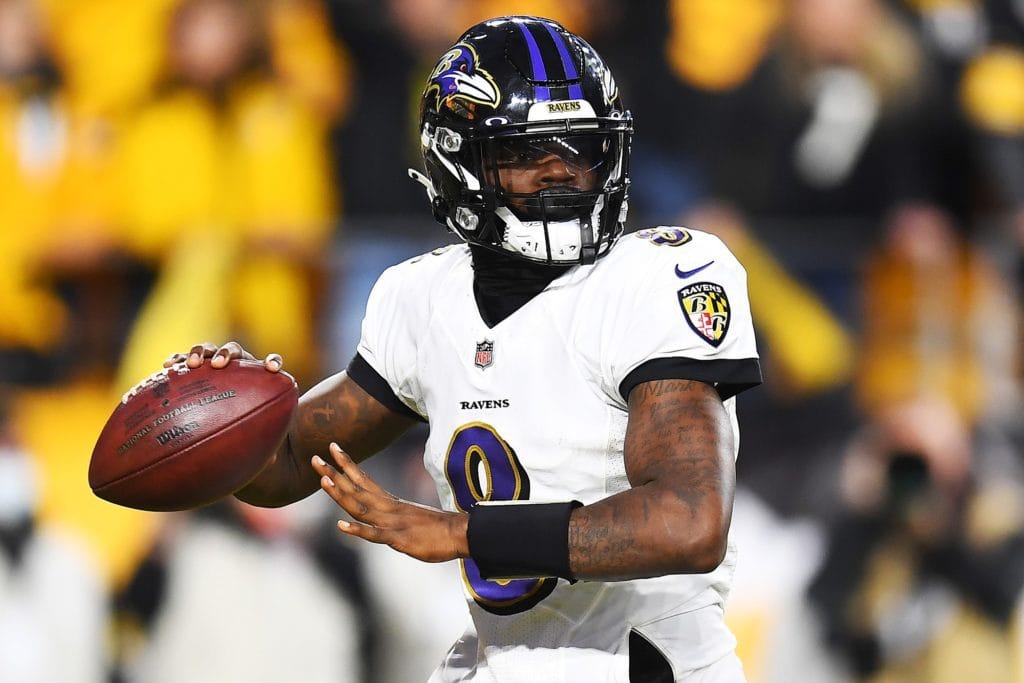 Lamar Jackson is the youngest NFL MVP award winner, and one of the best quarterbacks of the modern game.

Lamar Jackson won his MVP award in 2019 with the Baltimore Ravens. Jackson was simply unstoppable during that season and led the struggling Ravens to many wins with his exceptional solo performances. At the end of the season, Baltimore Ravens had an impeccable record of 14-2, which was also one of the best records by any team in NFL history.

Critics believe that this young quarterback is already on his way to becoming one of the best players in NFL history.

While Lamar Jackson has been unstoppable in recent years, his team, the Baltimore Ravens, hasn’t performed as expected. Critics believe that Lamar Jackson might have to switch sides and find a side that matches his potential before he can start to perform at his very best. 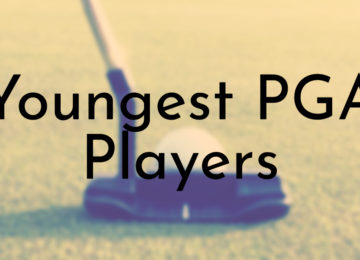