The exact origins of sports prizes is unknown, but the Ancient Greeks may have been some of the first people to hand out prizes for sporting events. During the earliest Ancient Olympic games, winners received valuable objects such as horses and bronze tripods. Giving out prizes to the winning competitors was important to the Greeks and the word athlete comes the Greek word ‘athlon’, which means prize. After a while, the Greeks standardized the prizes and gave out crowns made from leaves. While these prizes didn’t have monetary value, they showed of the athlete’s win, which often garnered them financial support and other rewards in their home towns.

These traditions established by the Ancient Greeks have been carried on in modern events. Trophies along with prize money are now the standard for any major sports tournament. The earliest trophy cups date back to the 18th and 19th century. The earliest non-cup trophies date back even further to the 16th and 17th century. All of the trophies on this list are still rewarded today.

Although the Stanley Cup may not be as old as some of the other trophies on the list, it is the oldest professional sports trophy in North America. The Stanley Cup was donated by and named for Sir Frederick Arthur Stanley, Lord Stanley of Preston and son of the 14th Earl of Derby. Lord Stanley paid about 10 Guineas ($50.00 at that time) for the trophy, which he wanted to present to “the champion hockey team in the Dominion of Canada.” 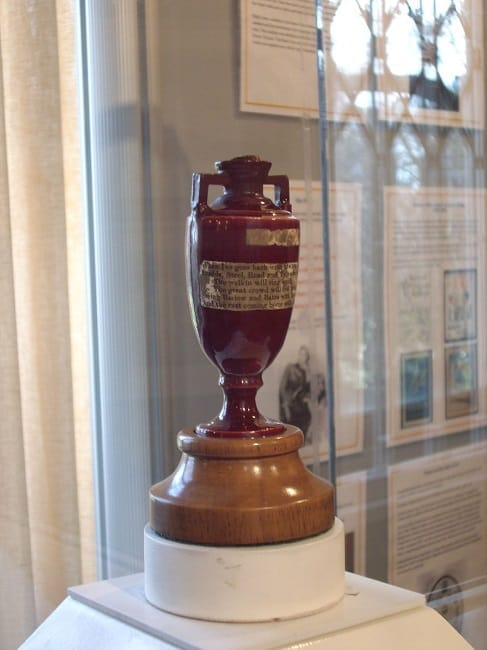 The Ashes Urn is a tiny terracotta urn that supposedly contains the ashes of a cricket bail. The trophy is now used in the Ashes Series of Test series cricket matches between England and Australia. The Ashes Urn is a playful representation of the two countries’ cricket rivalry.

The idea of the Ashes Urn trophy was inspired by a mock obituary that the Sporting Times newspaper published after England lost to Australia on home soil for the first time in history. The obituary read, “In affectionate remembrance of English Cricket which died at the Oval on 20 August 1882. The body will be cremated and the ashes taken to Australia.” A few weeks later, the English team went to Australia to play a series of Test matches in 1882 – 1883. The team’s captain, Hon Ivo Bligh was presented with the Ashes Urn sometime during the tour. 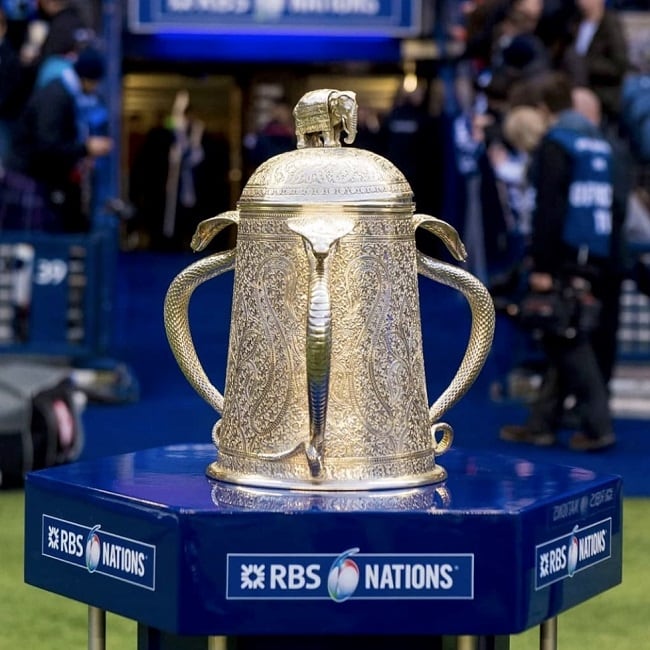 The club only lasted for a few years and was disbanded in 1878. To commemorate the Calcutta Football Club, the members melted down the 270 silver rupees in their bank account and turned it into a trophy. The trophy was presented to the Rugby Football Union in 1878 and the following year the first Calcutta Cup tournament was played in Edinburgh, Scotland. Today, the Calcutta Cup is presented to the winner of the England versus Scotland rugby union match, which takes place during the annual Six Nations Championship. 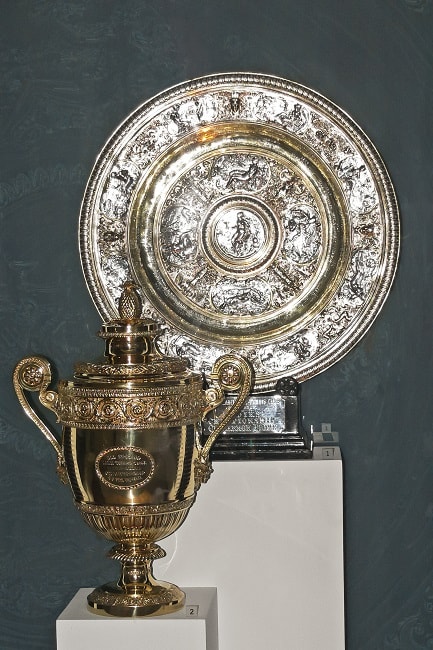 Today, there are several trophies given out to the winners of the Wimbledon Championships. The very first Wimbledon trophy dates back to the inaugural tournament in 1877. This first trophy was called the Field Cup and was used until 1883. The Field Cup was replaced by the Challenge Cup from 1884 – 1886. Both trophies became the property of William Renshaw after he won the Gentlemen’s Single title three times in succession twice. 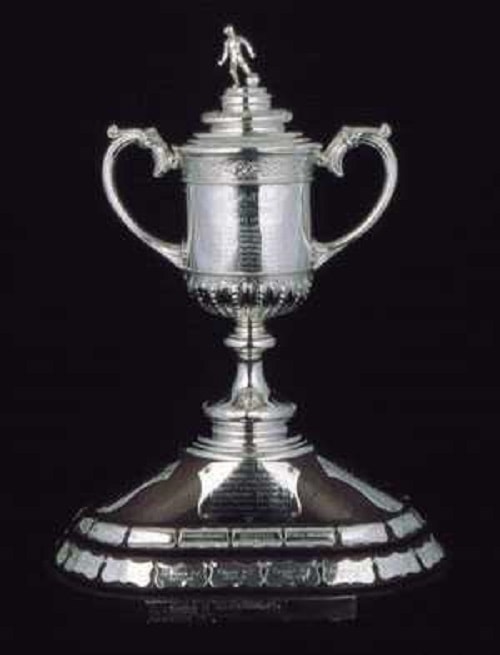 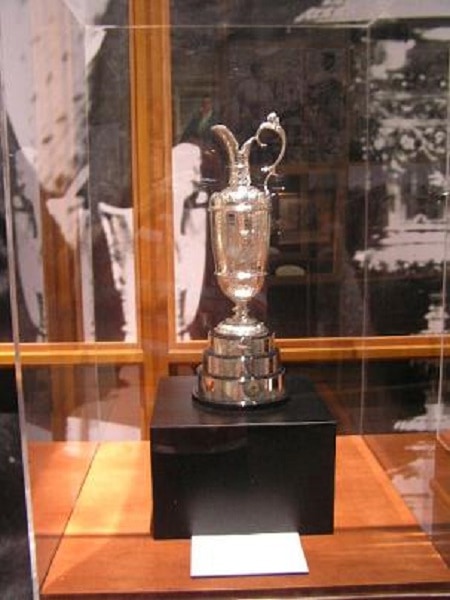 The Claret Jug, which is formally called the Golf Champion Trophy, dates back to 1872. Although the Claret Jug has been presented to the winner of of each year’s Open Championship, the trophy is not the tournament’s original prize. The first Open took place in 1860 and the winner was presented with the Challenge Belt.

In late 1872, the three golf clubs that were going to host that year’s Open – Prestwick Golf Club, the Honourable Company of Edinburgh Golfers, and The Royal and Ancient Golf Club – agreed to contribute no more than £15 (about £1,647.41 ($2,153.49) in 2018)) each toward a new trophy for The Open. Since they reached the agreement too late in the year, the 1872 Open Champion Tom Morris Junior was not presented with the Claret Jug. Instead, Morris was given a medal inscribed “The Golf Champion Trophy.” However, Morris’ name was the first to be etched on the Claret Jug and it was first presented to the 1873 winner Tom Kidd.

Despite its name, the America’s Cup trophy did not originate in the United States. The trophy, which is affectionately called “Auld Mug”, was named after the winners of the first race in 1851, a syndicate of wealthy Americans on a yacht dubbed America. Initially the trophy was called the 100 Guinea Cup.

America’s Cup was crafted in 1848 by Royal Jeweller Robert Garrard of London. It is made of high quality sterling silver. A few years later the cup was purchased by the first Marquess of Anglesey, who gave the cup to the Royal Yacht Squadron to be used as racing trophy. America’s Cup is considered the oldest trophy in international sport. 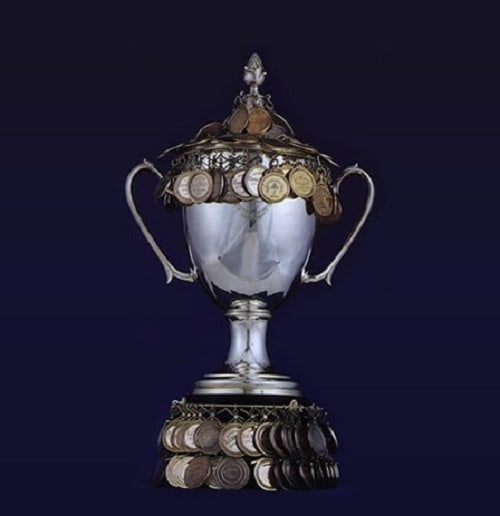 The trophy was first presented to the Musselburgh Club by its first winner Thomas McMillan, who became the captain of the club not long after. In addition to having one of the oldest sports trophies, the Royal Musselburgh Golf Club is one of the oldest golf societies in the world, which are all from Scotland.

The exact origins of the Scorton Silver Arrow are unknown but it was the first/original trophy (along with silver coins, a pouch, and silver brooch) awarded at the inaugural Antient Silver Arrow Competition in 1673. According to the event’s history, the Silver Arrow Competition is the world’s longest established and oldest recorded sporting event. The Society of Archers in the village of Scorton in Yorkshire, England founded the event to maintain and test their target archery skills.

The real Silver Arrow is kept at The Royal Armories in Leeds and a replica Arrow is awarded in its place today. The trophy goes to the first archer to pierce the inner 3 in diameter of the target from 100 yards away. In addition to the Silver Arrow, many other old trophies are awarded for various events. There is also a silver bugle from 1834, a gold medal from 1842, as well as a gold medal for the highest score from 1845. 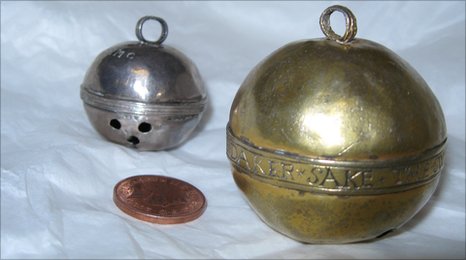 The Carlisle Bells date back to sometime in the 16th century and are believed to be the oldest sports trophy in the world. The bells are given to the winner of the The Carlisle Bell horse race in Carlisle, Cumbria, England. The first race took place in 1599 and the bells are the only remaining part of larger prize from the 17th century.

Civic records show that during the early 17th century, silver broad arrows and stock were given along with the bells to the winner of The Carlisle Bell. The silver arrows and stock have been missing for many years and even the bells were lost for a long time. They were rediscovered in the 19th century and have been used as the race’s trophy ever since.

Posted by Shasha Neil 0
Spread the loveContrary to popular belief, the marathon as we know it today was first established in 1896 at the…