Football is one of the most popular sports in America with millions of people flocking to see both professional and collegiate games. While professional football dates to around 1892, the very first football game was played by Princeton and Rutgers on November 6, 1869. So modern football was basically birthed by some of the country’s earliest colleges.
The oldest college football rivalries began not long after that first game in 1869 and have been played annually since then. All of the rivalries on this list date back to the late 19th century and show no signs of stopping any time soon. 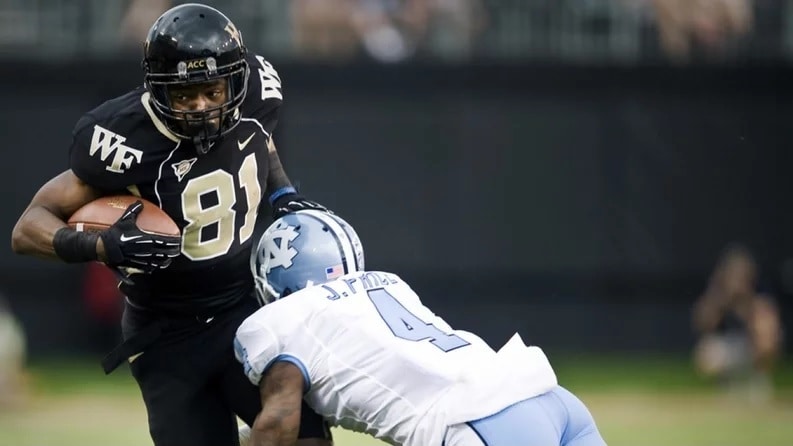 North Carolina vs. Wake Forest have an old rivalry that is over 131 years old, but in recent years the two teams have not been able to play as often as they would like. While both teams are part of the same conference, the ACC, due to the number of teams in the conference, North Carolina and Wake Forest can’t face off annually anymore. 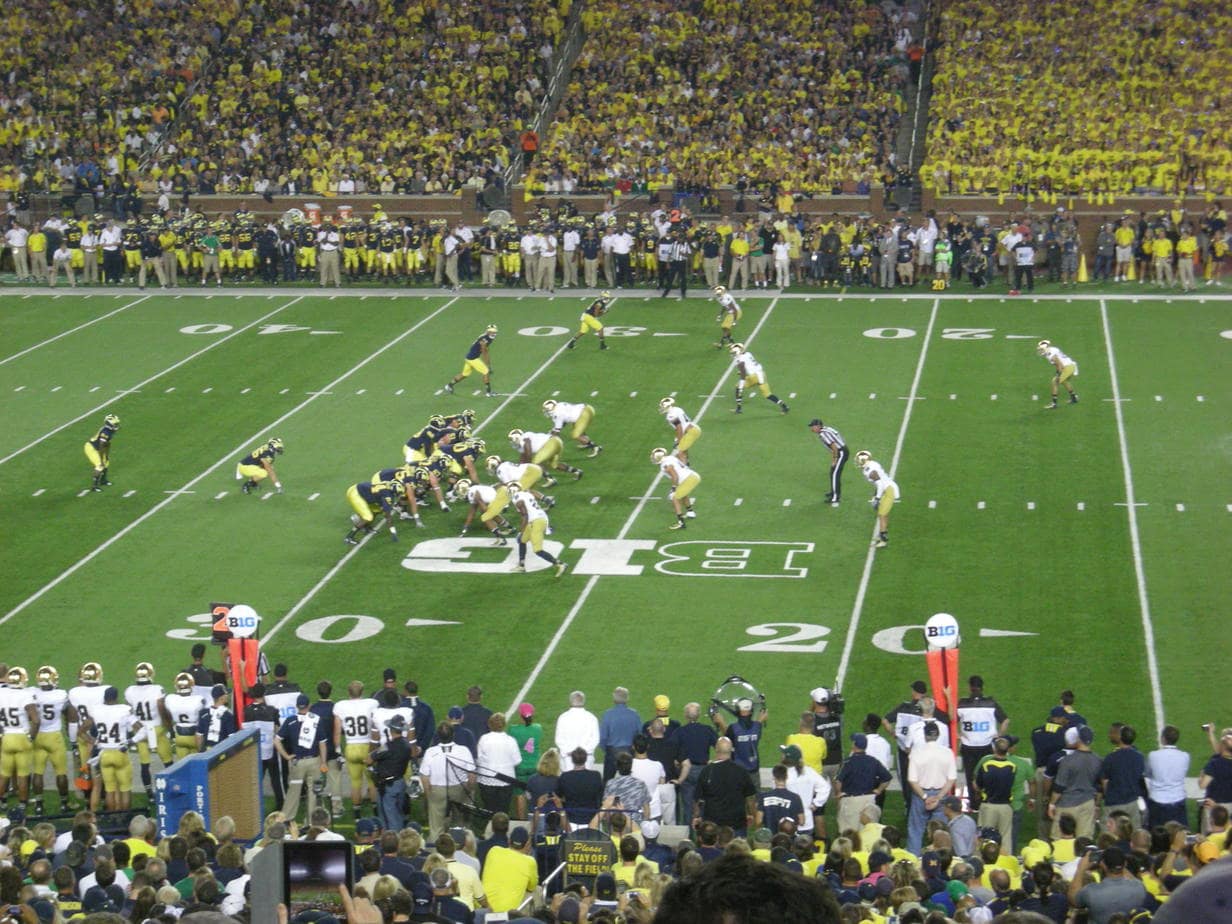 While the Michigan vs. Notre Dame rivalry is over 132 years old, the schools have played significantly fewer games than the other schools on this list. This is because the series has had many hiatuses, including a recent one that began in 2014 after Notre Dame joined the Atlantic Coast Conference (ACC) in all its sports except for football and hockey. However, Notre Dame decided not to play against Michigan between 2015 – 2017 so that it could focus on ACC games. The Michigan vs. Notre Dame rivalry resumed in 2018 and is scheduled for 2019 as well.

Of the 43 games that have been played between Michigan and Notre Dame, Michigan leads with 24 wins, while Notre Dame has 17, and the teams have tied once. 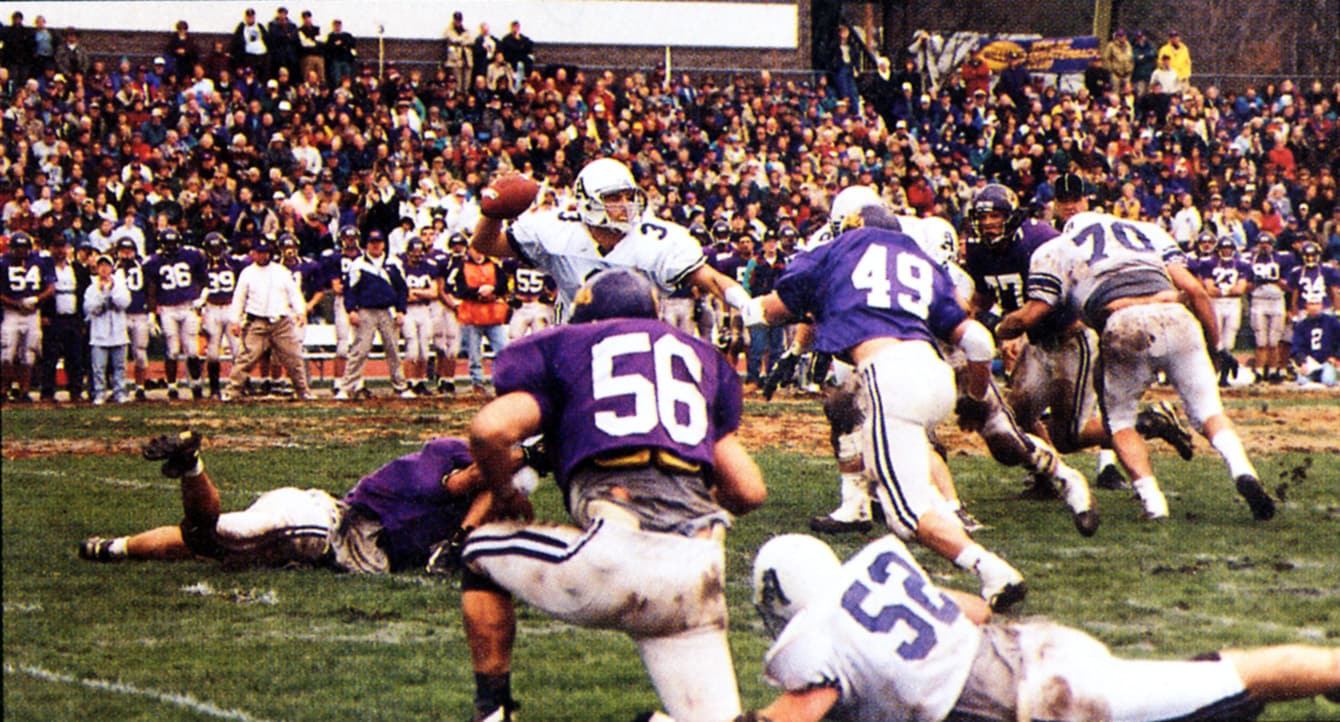 While most of the biggest and oldest college football rivalries are between Division I schools, Amherst vs. Williams of the Division III New England Small College Athletic Conference has also been played since the late 19th century. The Amherst vs. Williams rivalry is known as “The Biggest Little Game in America” and is well-known enough to have been featured on ESPN’s Page 2 bracket of the best college football rivalries in 2003.

Since 1884, Amherst and Williams have faced off annually, with only a few exceptions. The Biggest Little Game in America is the most played Division III rivalry game (132 games as of 2018) and the fourth overall in the NCAA at any level.

In 2007, the Amherst vs. Williams game was selected as the location for ESPN’s College GameDay – this was the first time that a Division III school hosted the show. 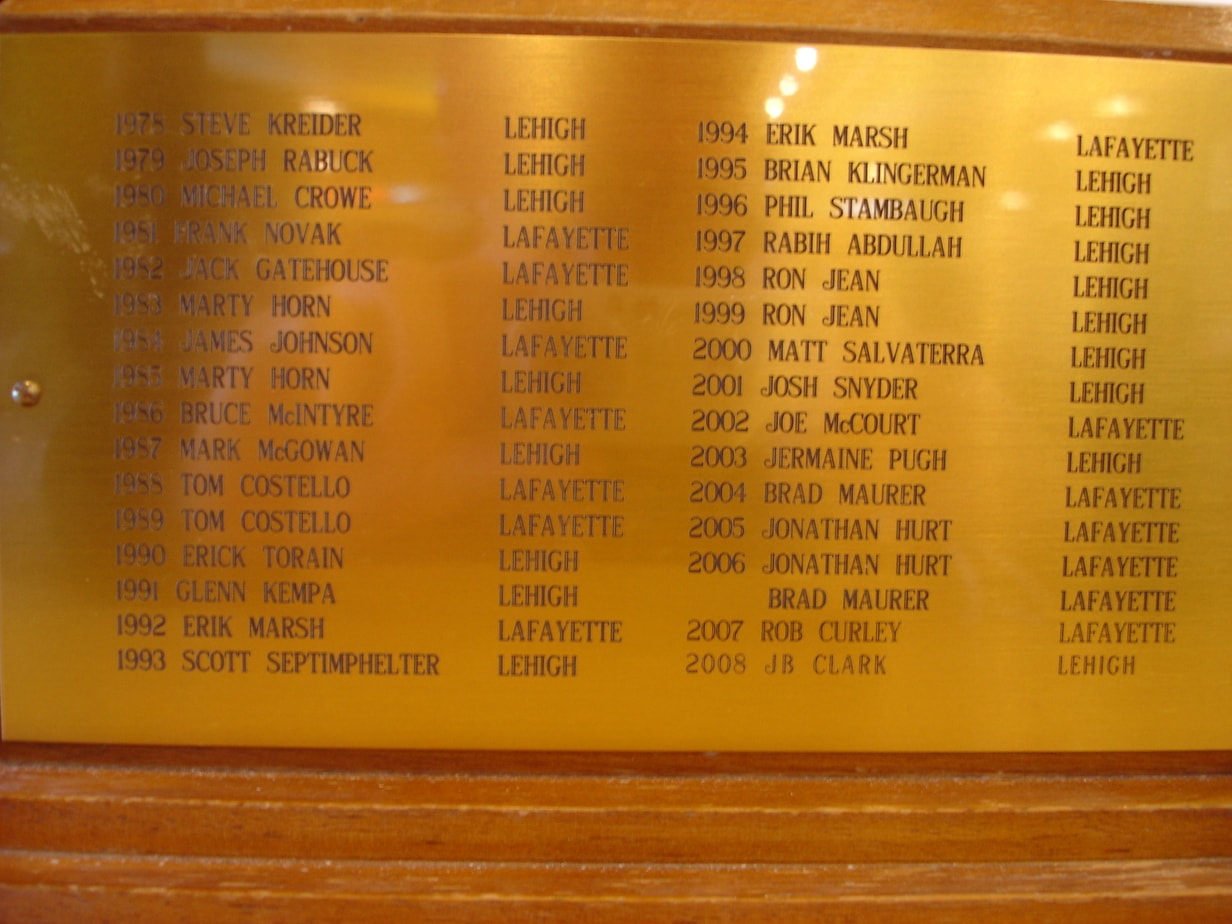 Lafayette vs. Lehigh’s football rivalry is so famous that it is simply known as “The Rivalry.” In addition to being one of the oldest rivalries, The Rivalry is the most played football rivalry in America (154 games as of 2018). Lafayette vs. Lehigh is also the longest uninterrupted annual rivalry series and with the exception of 1896, the teams have faced off every year since their first game in 1884.

Adding to the excitement of The Rivalry is that both Lafayette and Lehigh put up a good fight. Lafayette only leads the series with seven more wins over Lehigh – Lafayette has won 78 games, Lehigh has won 71, and the teams have tied 5 times.

So many people look forward to the annual Lafayette vs. Lehigh game that tickets are usually sold out months in advance.

The Dartmouth vs. Harvard rivalry goes back to 1882 at a time when Harvard’s football program was unstoppable. It took 19 years after that first game for Dartmouth to even score against Harvard and another two years before Dartmouth won a game against the Crimson.

With such a big lead early on in the rivalry, Harvard has come out on top 71 times while Dartmouth has only won 46 games and the teams have tied five times. Over the years, Dartmouth has had a few winning streaks and won the last game played in 2018.

The first time that Dartmouth won against Harvard was in 1903 at the first game ever played in the new Harvard Stadium.

Harvard and Penn’s football rivalry may not be as intense as some of the others in the Ivy League conference, but the school’s have fought hard against one another since they first began playing in 1881. Although Harvard has beaten Penn in over half of their 89 games together, Harvard does view Penn as strong opponents, particularly in recent years.

Since 1982 Harvard and Penn have won 29 Ivy League Football Championships between them – Penn has won 17 and Harvard has won 12. 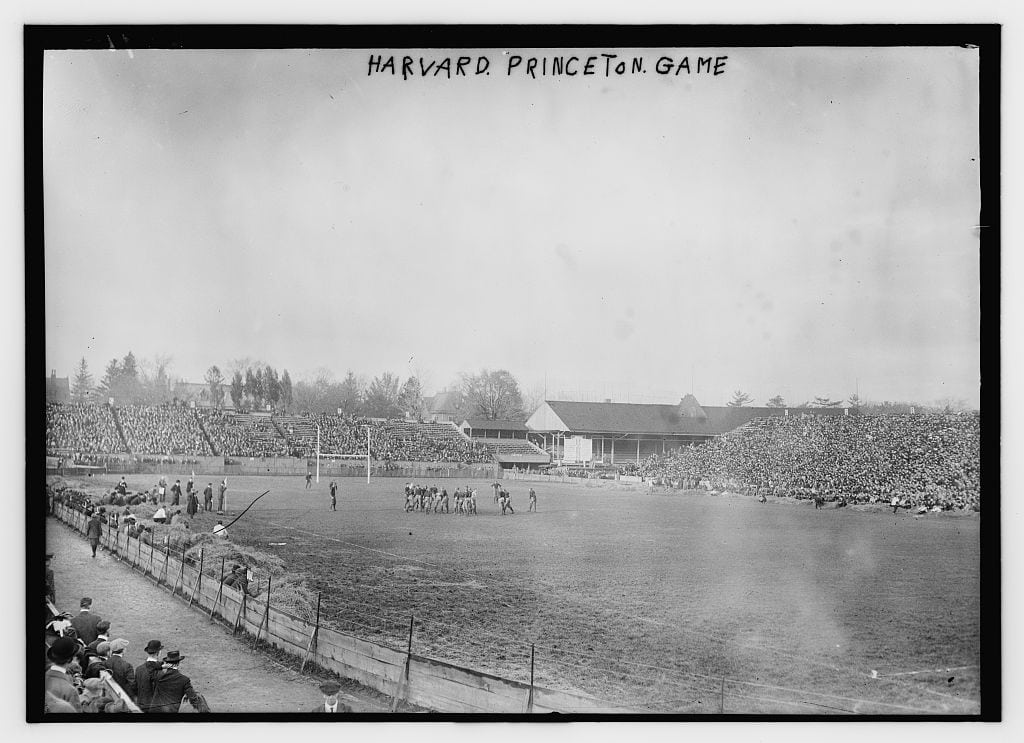 While Harvard, Princeton, and Yale have a famous rivalry (known as the Big Three) across academics, athletics, and socially, when it comes to football, Harvard has always viewed Princeton as its biggest and toughest competition. Although Harvard beat Princeton in their very first game, since then Princeton has gone on to win more of the schools’ 111 games. Currently, Princeton has won over Harvard since 2017, with the teams set to meet again in Fall of 2019.

Agreements between Harvard, Princeton, and Yale’s athletic departments in 1906, 1916, and a final revision in 1923, eventually led to the creation of the Ivy League collegiate athletic conference. Both Harvard and Princeton have won the Ivy League football title several times.

Harvard and Princeton have had such an intense rivalry that in 1892, Princeton turned down Harvard’s offer to play a game on Thanksgiving Day. Harvard retaliated by refusing to play Princeton for the rest of the season. 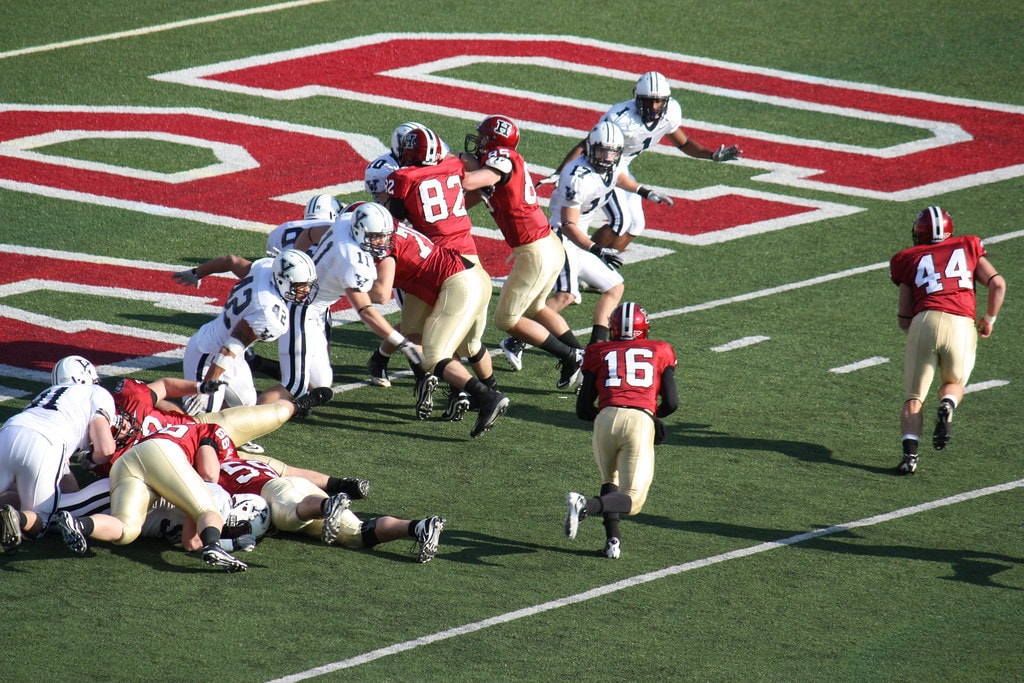 The Harvard vs. Yale football rivalry, simply called “The Game,” is one the oldest and most intense sports rivalries in America. Due to the schools’ proximity to one another, Harvard and Yale have also duked it out, both in academia and athletics. Harvard and Yale’s battles in various sports are so well known that they have shaped American college athletics.

Harvard and Yale are responsible for the rules and innovations that turned football from “a semi-organized brawl into a sophisticated sport.” 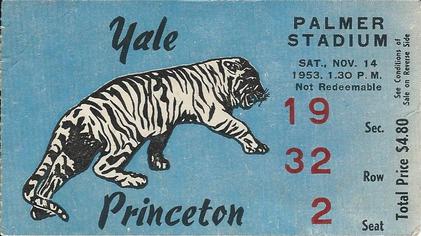 The rivalry between Princeton and Yale dates all the way back to 1873 when Yale became the third American college, after Princeton and Rutgers, to put together a football team. The competition between the two schools has been heated from the beginning with Princeton scoring three points against none from Yale in their very first game. While Princeton dominated college football in the 19th century, Yale has won more the 141 games the teams have played over the past 146 years.

The first time that a Princeton vs. Yale game was filmed was on November 15, 1902 and the camera was manned by Thomas Edison. 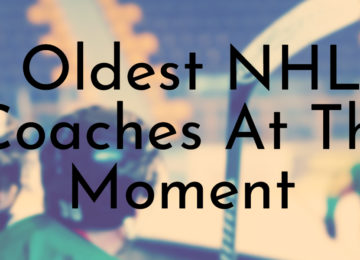 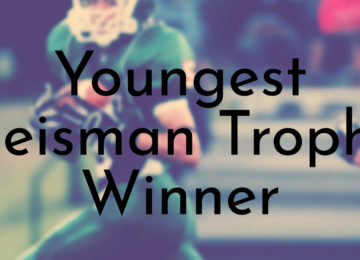