The way we look at cemeteries has changed. It wasn’t that long ago when graveyards were considered morbid and creepy environments for both children and adults.

They are not as stark and inhospitable as the cemeteries of old but are rather welcoming with vast greens and flower patches.

There are around 140,000 graveyards in the US and some of them have been around for over a century. These old cemeteries are now considered historical landmarks and are fascinating places to learn about a place’s history and its people.

Here’s a list of some of ‘The oldest cemeteries in the United States.’ 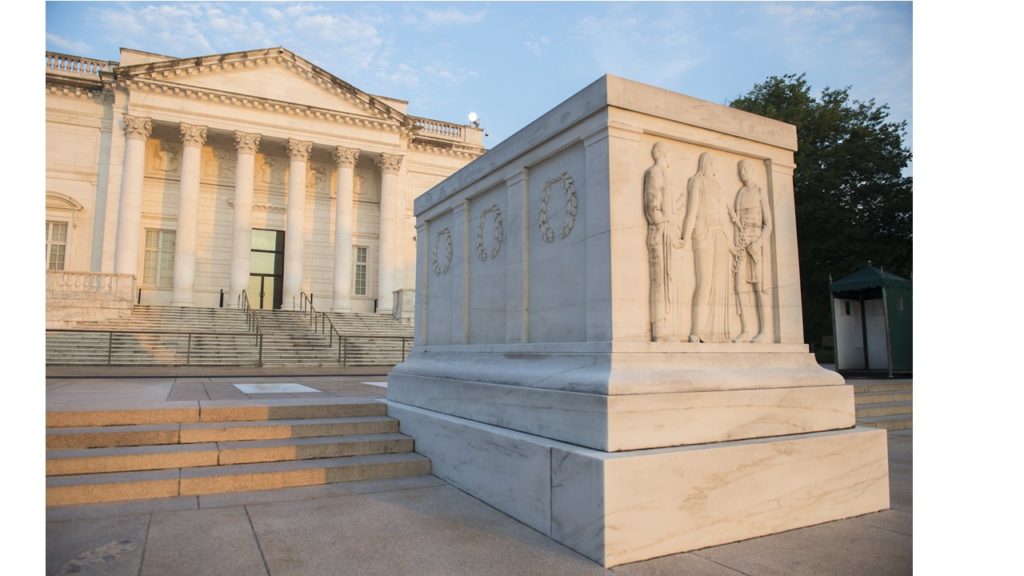 Spanning 639 acres, Arlington National Cemetery is the tenth oldest cemetery in the US.

A military cemetery, the United States Department of the Army has jurisdiction over the burial grounds. It is the final resting place of the nation’s dead resulting from its conflicts beginning with the civil war. Today, it has become an important historical site and is a somber reminder of the country’s triumphs and the high cost of freedom.

It is also one of the most elite cemeteries in the US and is known as the final resting place of Astronauts, explorers, and even US presidents. They even have a special section on their website dedicated to notable graves.

The 639-acre cemetery has gravestones of every faith and belief, including Christian, Muslim, Judaic, Wiccan, and even Atheist. 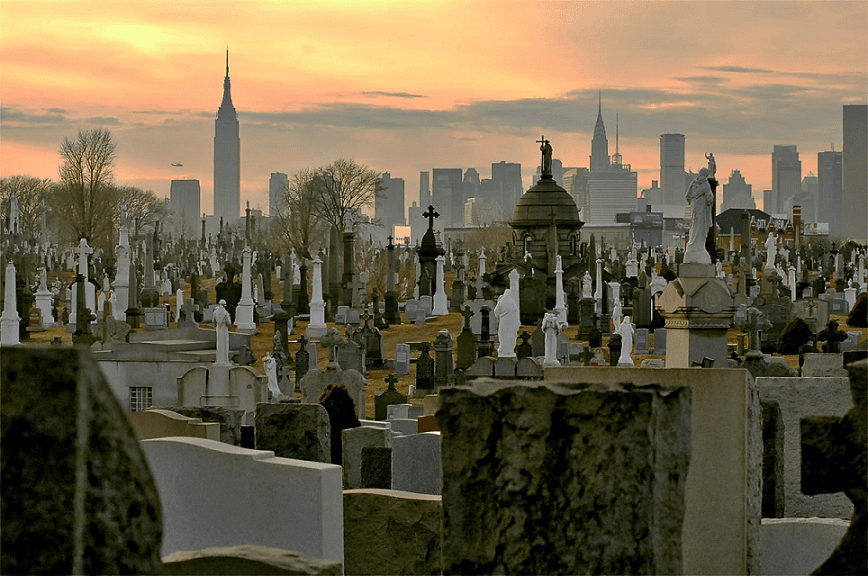 With about three million burials, Calvary Cemetery has the largest number of interments of any cemetery in the US. It is also famous for being the final resting place of well known gangsters such as Joe Masseria, Ignazio Saietta, Peter Morello, Thomas Lucchese, Dominick Napolitano, and Benjamin Ruggiero.

The cemetery was also featured in the movie ‘The Godfather’ as the final resting place of fictional mafia boss Don Vito Corleone.

The Trustees of St. Patrick’s Cathedral manage the cemetery which is one of the oldest and largest cemeteries in the country.

The first immigrant to be recorded to have passed through Ellis Island, Annie Moore Schayer is also buried in Calvary Cemetery. 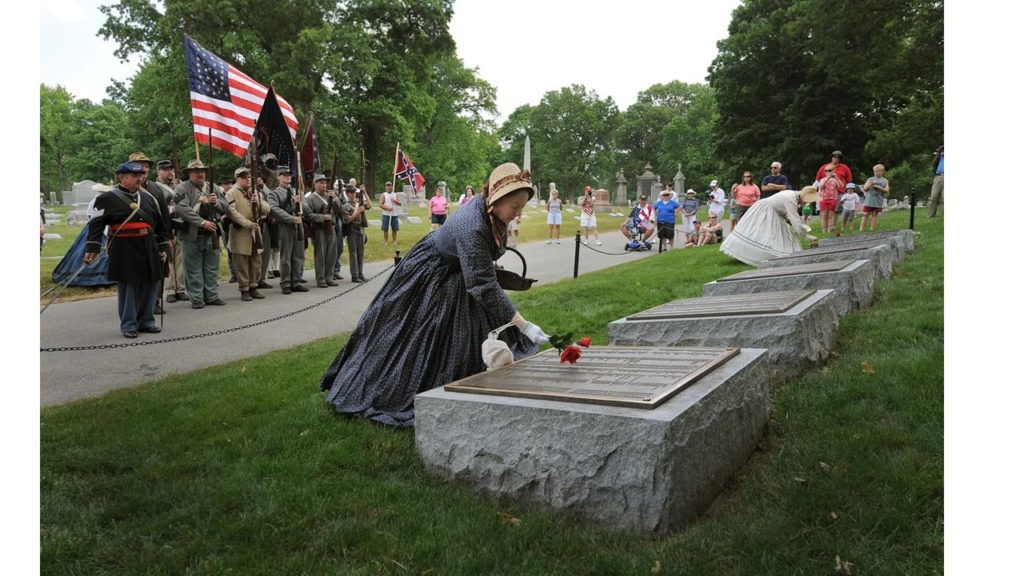 Established in 1821, Greenlawn Cemetery in Indianapolis, Indiana was the initial burial ground of over 1,100 Hoosier pioneers, 1,200 Union soldiers, and 1,600 Confederate prisoners of war.

It was nearing full capacity by 1863 due to wartime casualties.

On October 22, 1863, Crown Hill Cemetery was established in an effort to relocate the soldiers from Greenlawn to a new section in Crown Hill.

By 1890 Greenlawn Cemetery was closed to new burials and plans were made for its complete relocation.

It was during this time that it was discovered that most of the graves have been vandalized and that bodies were stolen presumably for examination and dissection at local medical schools.

At the time of the American Civil War, Indianapolis had no cemetery specifically designated as a burial place for Union soldiers who died in camps and hospitals near Indianapolis. 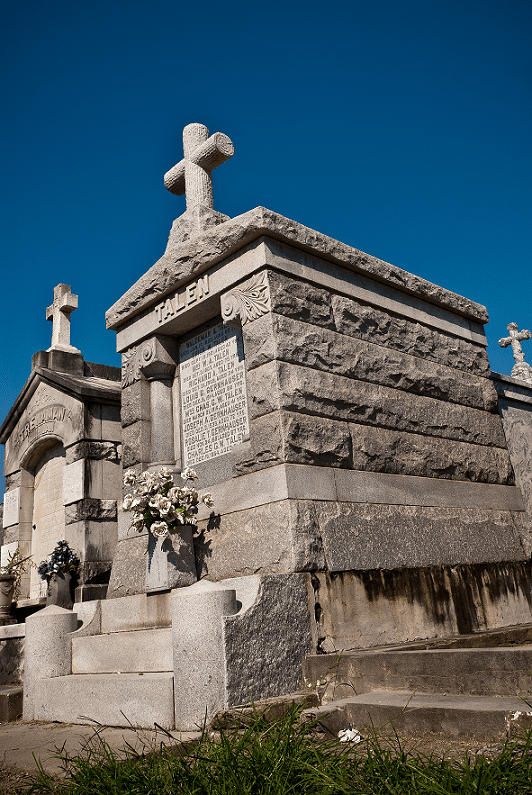 Above-ground vaults were used for the majority of the graves.

As expected of such an old and historical cemetery, many prominent figures have been buried there. For cemetery ‘Number 1’, these include  Etienne de Boré, Homer Plessy, Ernest N. “Dutch” Morial,  Alexander Dimitry, and even renowned voodoo priestess  Marie Laveau.

Cemeteries 2 and 3 have notable names such as Danny Barker,  Ernie K. Doe, Charles Genois, E. J. Bellocq, and painter Ralston Crawford among many others.

On March 1, 2015, the cemetery was closed by the  Roman Catholic Diocese of New Orleans, probably due to rising incidents of vandalism on the property.

In a highly controversial move, the diocese is now charging tour companies for access to the tune of $4,500 per year. Families who have tombs may apply for a pass to visit their loved ones.

Hollywood actor Nicolas Cage commissioned a pyramid grave for himself on the site, even though he is still very much alive and healthy. 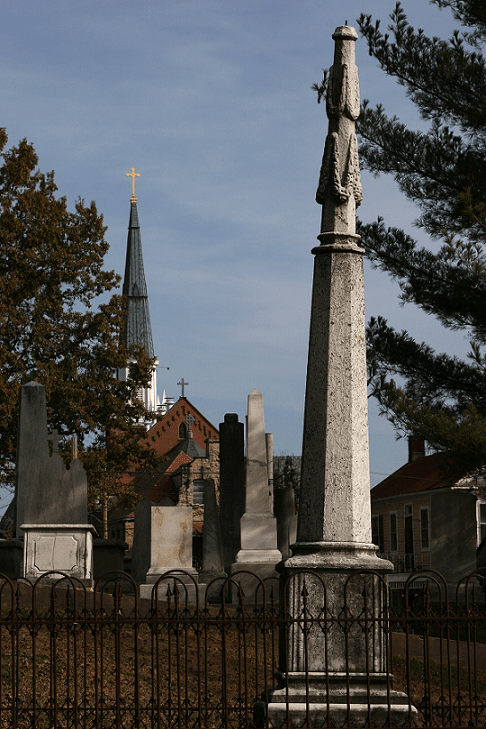 Ste. Genevieve Memorial Cemetery opened in 1797 and became part of the National Historic Landmark District in 1960 and the National Register of Historic Places in 1966.

Known for dividing the burial grounds for Catholics, Lutherans, and Protestants, it is also the final resting place of 50 native Americans and notable US Senator Lewis F. Linn.

Over 5,000 recorded burials have been made in the two-block cemetery before being closed in 1881. It is said that there have been additional burials made until 1894, with almost half of them children under six years old.

It has since been restored in 2010 by the Foundation for Restoration of Ste. Genevieve, Inc.

A number of African Americans, both slave and free, have been laid to rest there in unmarked graves. 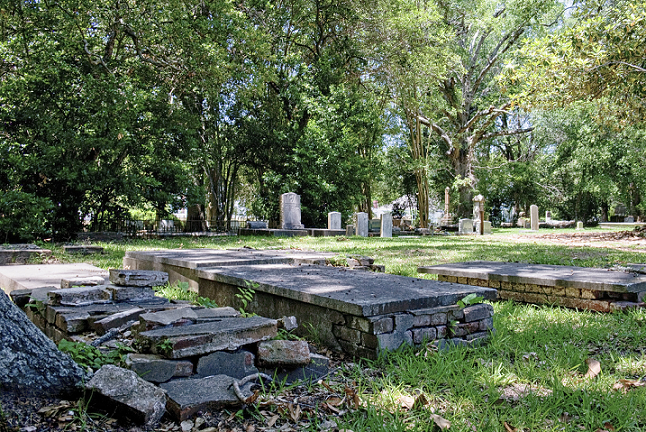 Local citizens have been responsible for its upkeep and preservation, bringing the historical site back into the public eye. It has become part of the itinerary for many heritage site tours.

The cemetery is also famous for being used as a location site for the movie Steel Magnolias in one of its climactic scenes. 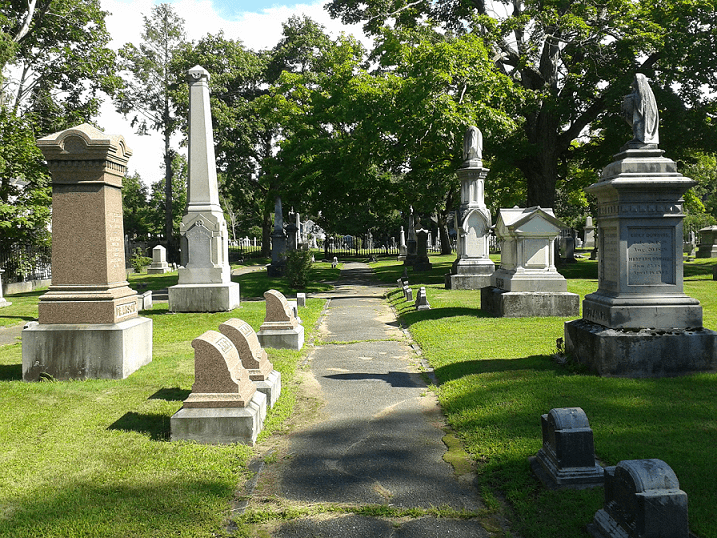 There are many notable figures in American history buried in the Old North Cemetery such as Governors, religious leaders, senators, industrialists, and even US President Franklin Pierce have been laid to rest in this historical cemetery.

The Old North Cemetery is now being preserved because of its historical value. It has been listed on the National Register of Historic Places since 2008.

Lewis Downing, founder of the Abbot-Downing Company and the creator of the Concord coach, Is buried here. 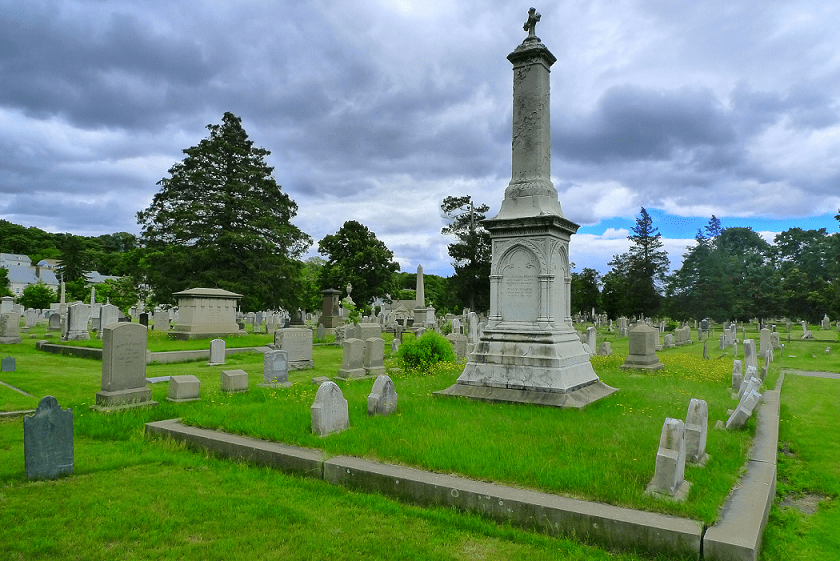 Despite being established in 1700, records show that the first official burial took place eleven years later in 1711. No one knows for sure why the cemetery remained largely unused in its early days; even by 1736, only 14 people were buried there.

Today, it has over 40,000 gravestones and is the largest municipal cemetery in the territory.

The cemetery has headstones of notable historical figures such as John and Nicolas Brown, Stephen Hopkins, Horace Mann, and Samuel Bridgham.

Its distinct architectural and landscape features combined with artistic gravestones make it a popular destination for both tourists and historians.

The North Burial ground is one of the largest public cemeteries. At least 220 deceased are buried here each year. 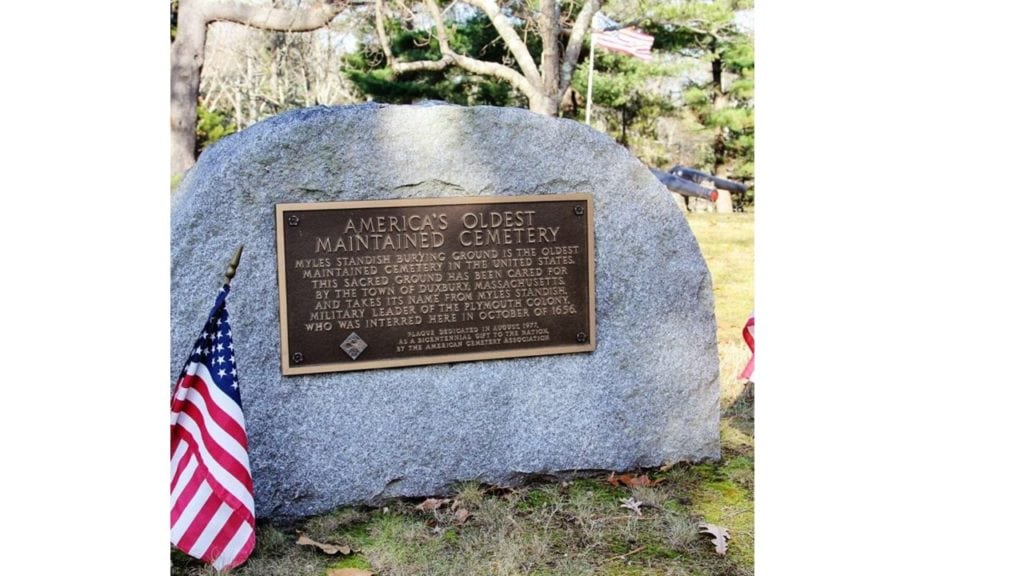 Located in Duxbury, Massachusetts, Myles Standish Burial Ground (Standish Cemetery) was established in 1638 and is one of the oldest cemeteries in the US. Approximately 130 gravestones are marked,  some dating as early as 1697.

Pilgrims who arrived on the Mayflower in 1620 including Captain Myles Standish are buried on the 1.5-acre lot. Interest in locating the final resting place of the notable captain resulted in two exhumations in 1889 before his remains were found.

The National Register of Historic Places has recognized the Myles Standish Burial Ground as a place of significant historical importance. 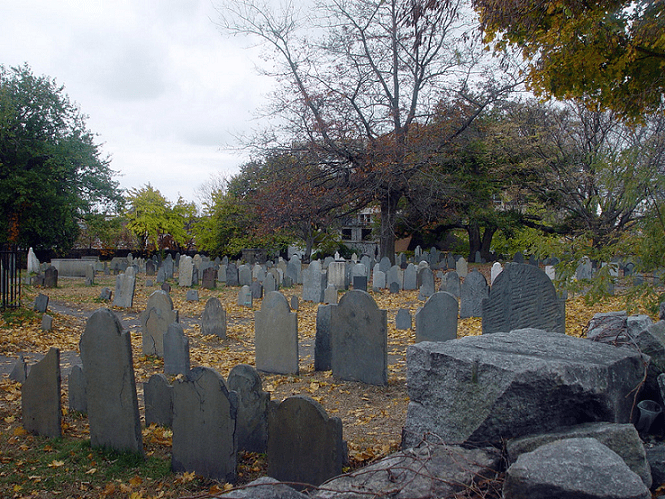 Established in 1637, its earliest gravestone dates back to 1683 and became a public cemetery in 1717.

Around 485 headstones are to be found on the property, but since slaves weren’t allowed tombstones during that cruel era, records say that 600 people are buried there.

Mostly granite was used for the gravestones and luminaries such as Massachusetts Governor John Brooks and  Revolutionary War heroine Sarah Bradlee Fulton lay alongside the nameless slaves and 19 innocent women executed by Judge John Hathorne at the height of Salem’s witch trials.

They say that the cemetery is haunted by the ghost of Judge John Hathorne.