Although the worship of the Greek Gods is no longer widespread, their myths and stories have fascinated people for generations, especially in the Western world. Stories from Classical Greek Mythology have been taught in schools and even reimagined for younger generations – like the Percy Jackson series by Rick Riordan.

While there are technically numerous gods in the Greek pantheon, most people are thinking of the Olympians and Hades when “Greek Gods” are mentioned. For the purposes of this list, we have only included the Olympians and Hades. Determining who is the oldest of these gods is challenging, as many of the gods have more than one origin story. However, for the most part the order of the first generation of Olympians (Zeus and his siblings) is agreed upon and represented in this list. For the second generation of Olympians, the timeline is even more difficult as many of their stories overlap one another. Usually, Athena was born first and Hermes and Dionysus are the two youngest. The order of the gods in between, however, is up for debate. So with all that in mind, here are the oldest Greek Gods. 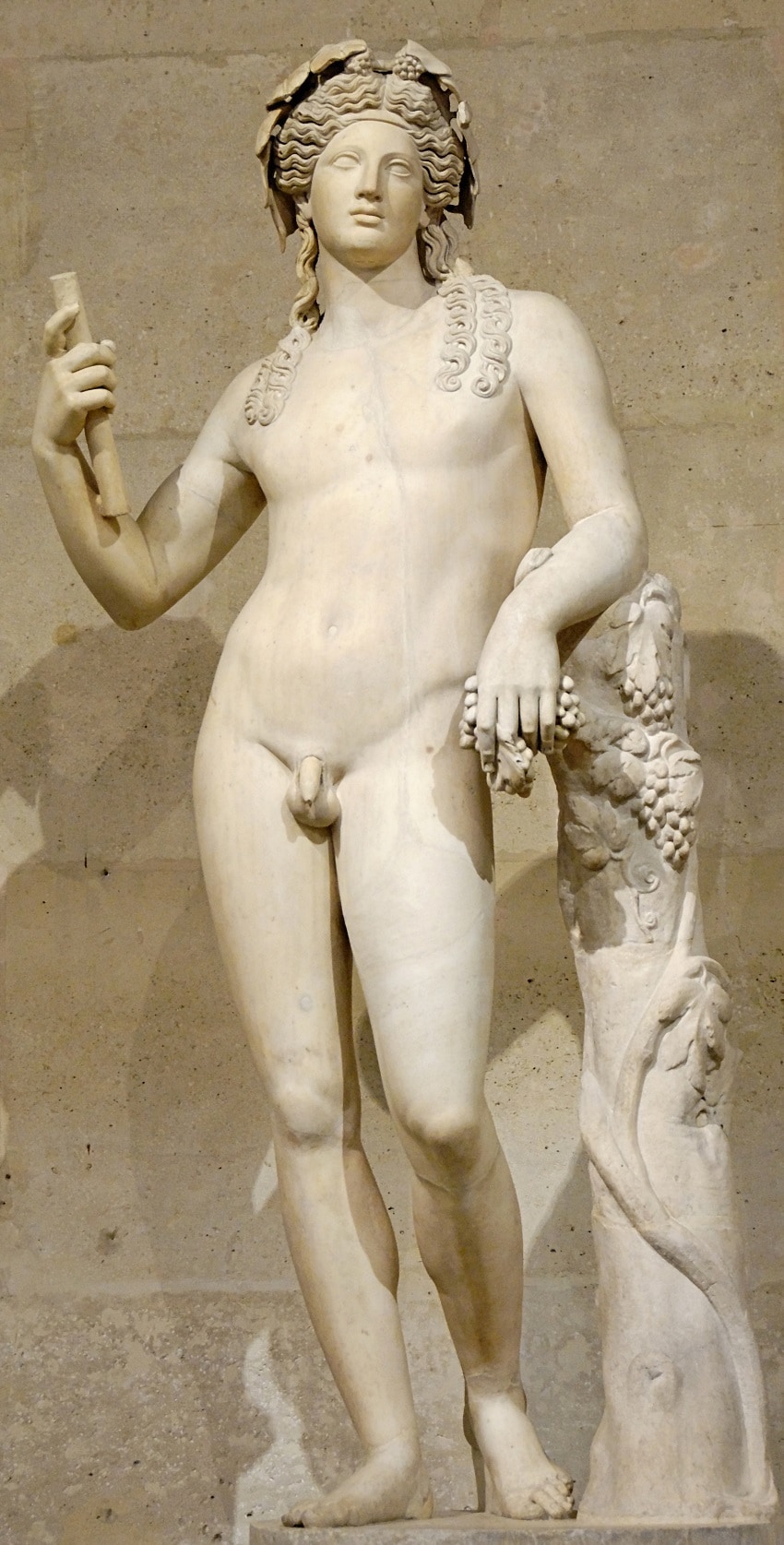 Dionysus, also spelled Dionysos, is the youngest of the Olympian Gods and was Zeus’s son with either Demeter, Semele, and sometimes Persephone. Often depicted as an effeminate, long-haired youth, Dionysus was the God of Wine, festivity, ecstasy, and insanity. Dionysus is credited with gifting mankind with wine and teaching humans how to cultivate grapes to create wine. There were many cults associated with Dionysus and their main religious focus was on the consumption of wine.

Dionysus traveled all over Greece and as far as India to spread his cult of wine.

Hermes is the second youngest of the Olympians and is the son of Zeus and the nymph Maia. He is the Messenger of the Gods as well as the patron god of travelers, hospitality, diplomacy, roads and trade, and thievery. In addition to his duties as Zeus’s personal messenger, Hermes led souls down into the Underworld.

Like the other gods, Hermes has several symbols, but his most famous are his winged sandals (Talaria) and his winged helmet (Petasos). Hermes is also often depicted with a Caduceus, a winged staff intertwined with two snakes.

In Roman mythology, Hermes was known as Mercury, a name derived from the Latin merx, which meant “merchandise,” and the origin of the words merchant and commerce. 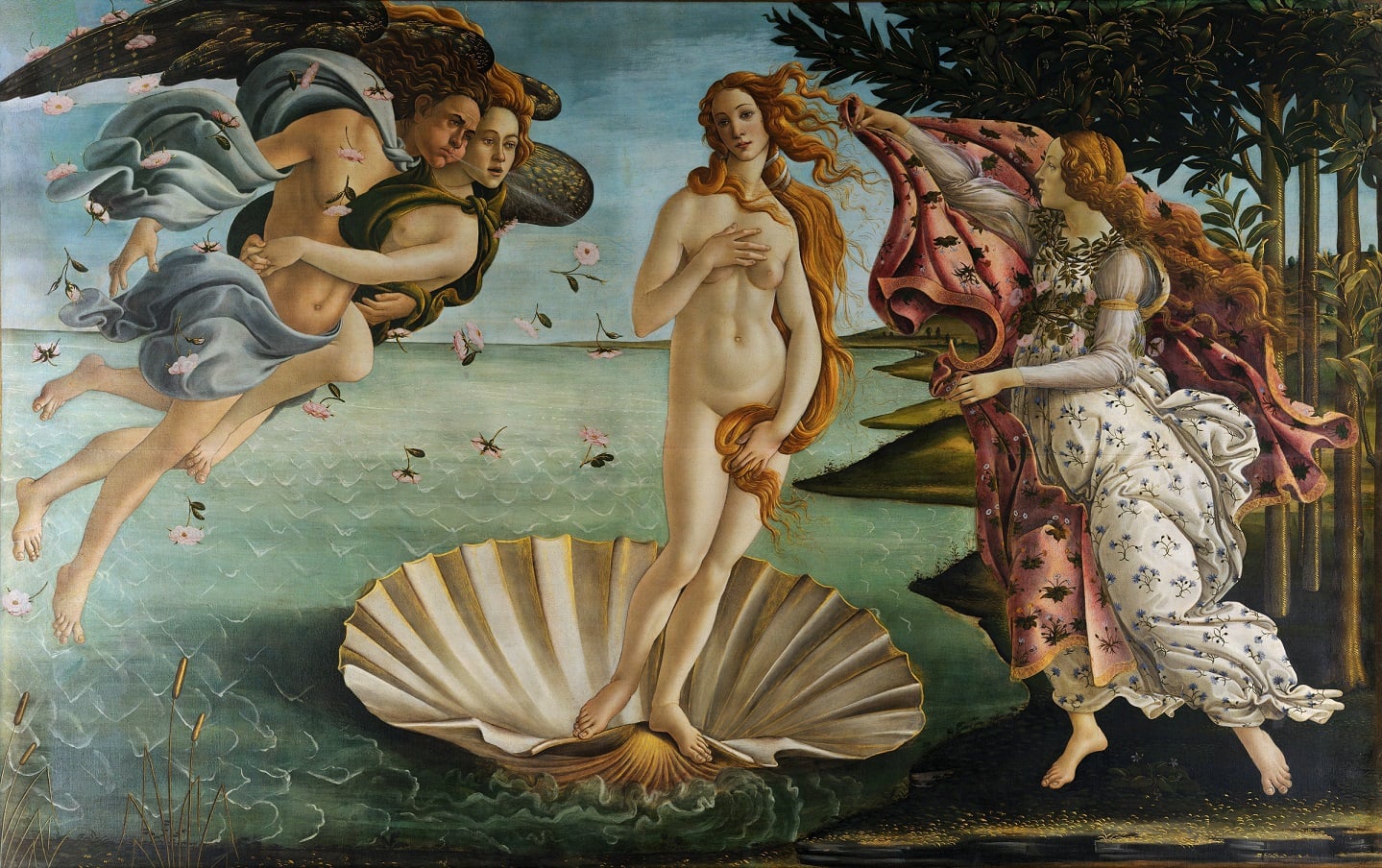 Aphrodite, the Goddess of Love, beauty, pleasure, and procreation, has various origin stories. In one telling from Homer, Aphrodite is the daughter or Zeus and the Titaness Dione. The more famous of Aphrodite’s origin stories (by Hesiod), states that she was born when Cronus castrated his father Uranus (Ouranos) with a sickle and cast the genitalia into the sea foam. The great philosopher Plato believes that the two conflicting stories were about two different goddesses with the same name.

Although Hera forced Aphrodite to marry Hephaestus, Aphrodite took on many lovers, including Ares. While Aphrodite has many well-known myths, some of her most famous stories are from the Iliad‘s Trojan War.

While most of the Greek gods are no longer worshipped, Aphrodite is a major deity in modern Neopagan religions, including the Church of Aphrodite, Wicca, and Hellenismos. 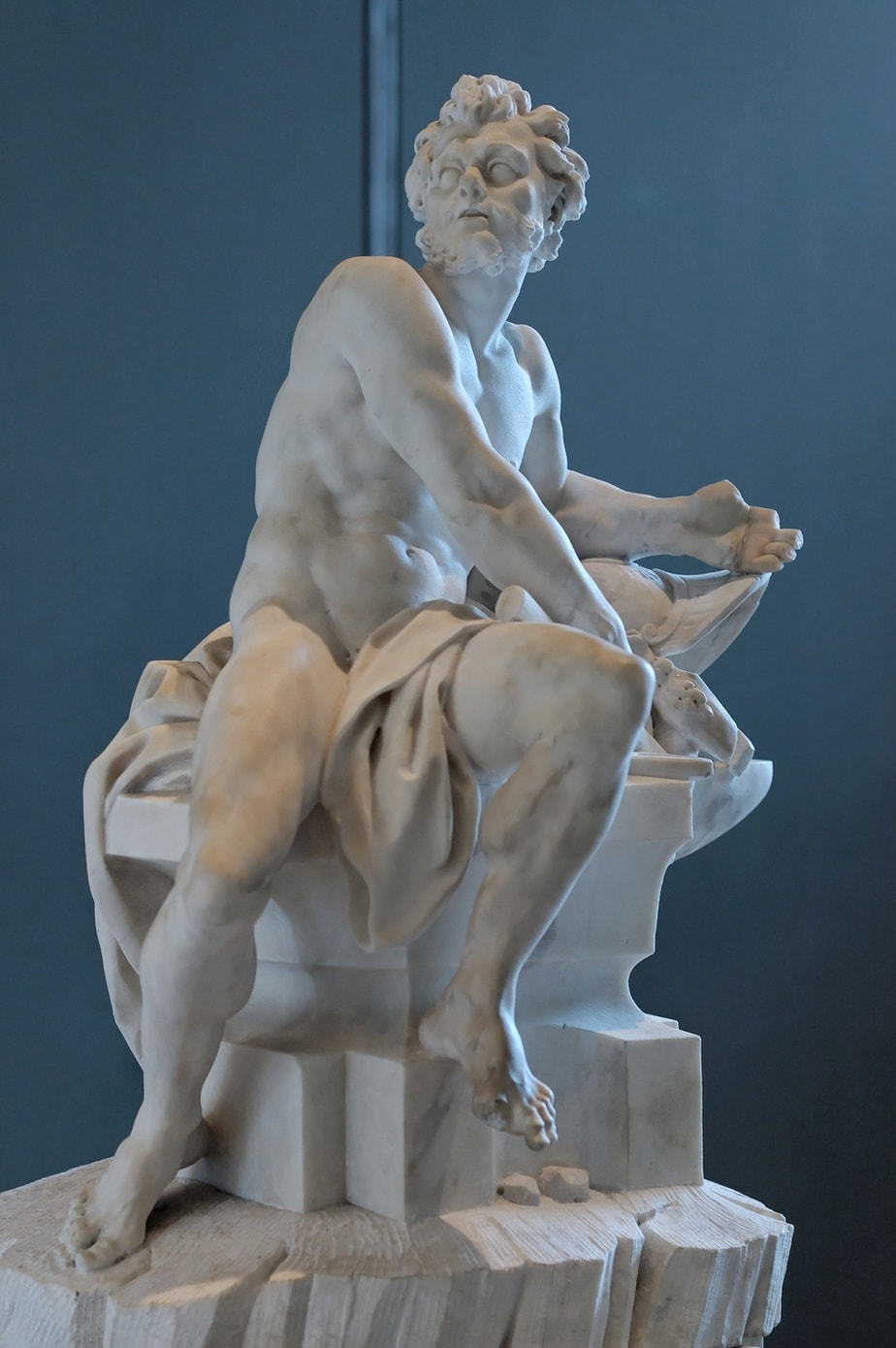 Depending on the myth, Hephaestus was either the child of both Hera and Zeus, or he was born only from Hera, with no father, out of jealously for the birth of Athena from Zeus’s head. Regardless of his parentage, Hephaestus was not as beautiful as the other gods and Hera thought he was downright ugly. Because of his lack of beauty, Hera threw Hephaestus from the heavens and he became crippled.

Despite his looks, Hephaestus became the craftsman of the gods and the Master Blacksmith. Hephaestus is responsible for creating each of the Olympians’ weapons as well as the armor and weaponry of several heroes.

As the God of Blacksmiths, Hephaestus was worshipped in the manufacturing and industrial centers of Greece, particularly Athens. 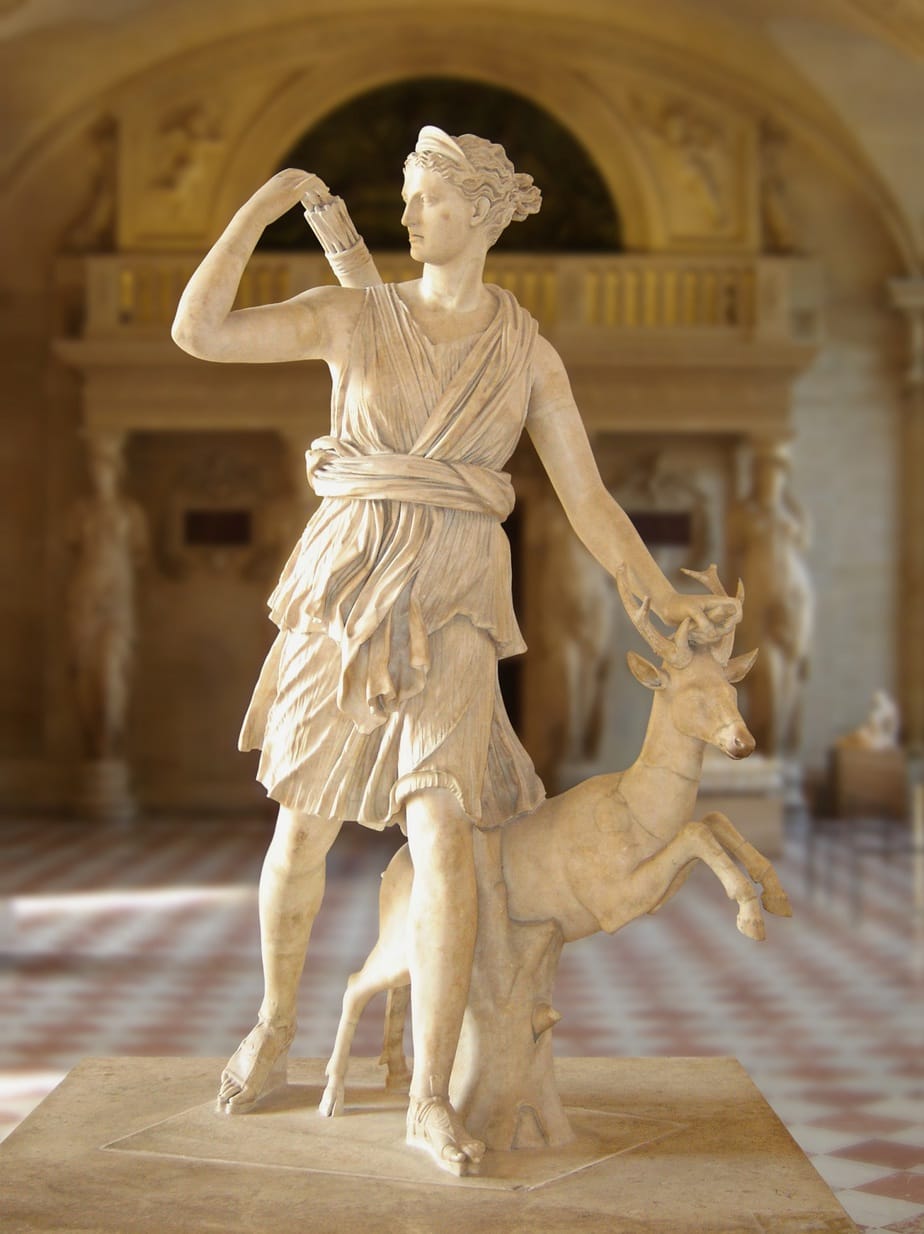 Artemis is the twin sister of Apollo and is the Goddess of the Hunt. Like Athena and Hestia, Artemis was a maiden goddess and although she had many suitors, Artemis swore that she would never marry. Due to her maiden status and youth, Artemis is the patron and protector of young girls. Artemis is also one of the main goddesses who protects women in childbirth. Like her brother, Artemis is associated with archery and one of her best known symbols is the bow and arrow.

Artemis was widely worshipped and her temple at Ephesus was one of the Seven Wonders of the Ancient World. 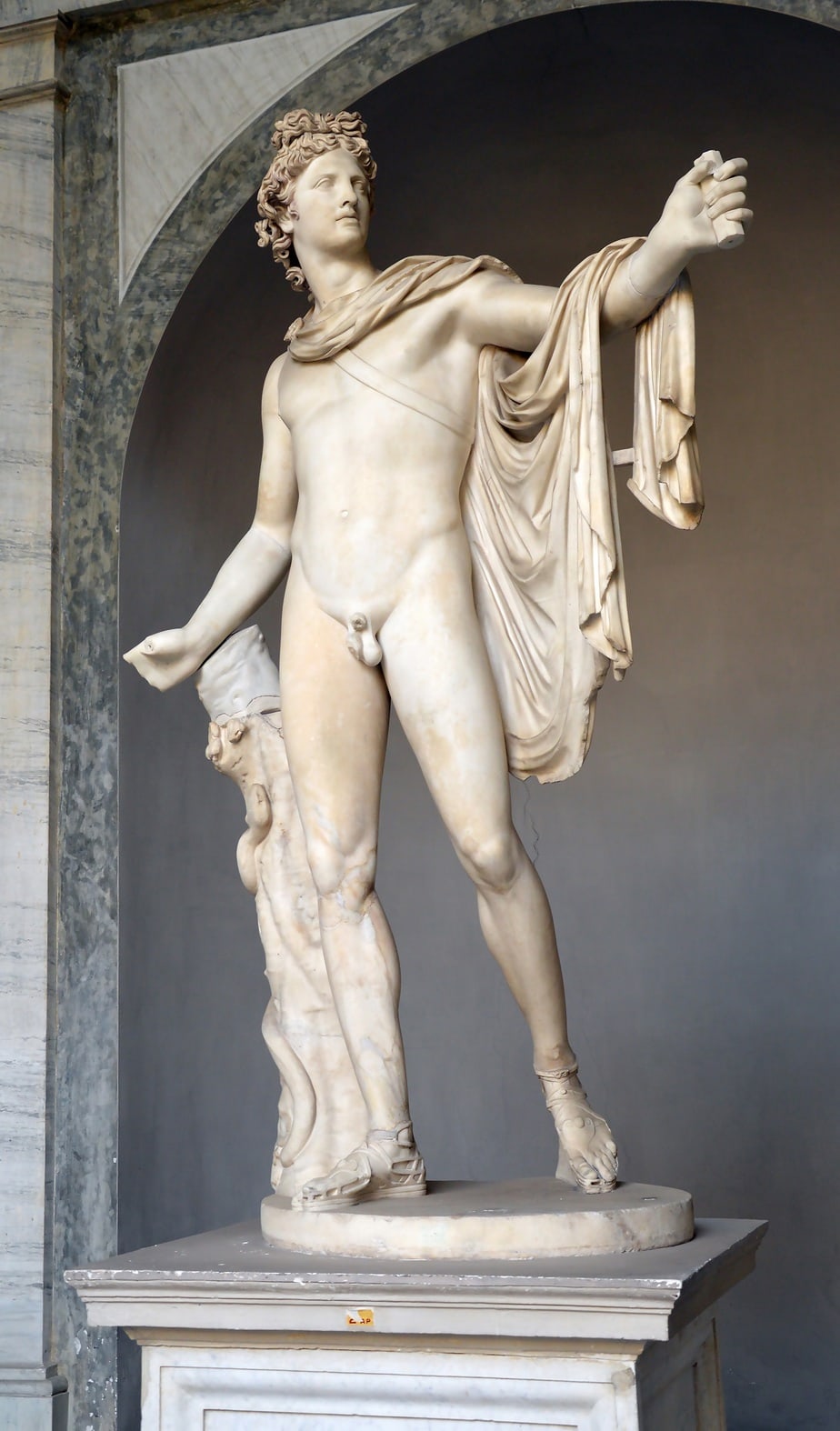 Apollo or Apollon is the twin brother of the goddess Artemis – their parents are Zeus and Leto. He is the God of the Sun, prophecy, philosophy, and the arts. Apollo was often depicted as a handsome athletic young man and was considered the most beautiful god.

As the god of prophecies, Apollo was the patron god of Delphi, where the famous Oracle resided. The Pythia or the high priestess of the Temple of Apollo served as the Oracle. In an extension of his role as a prophetic deity, Apollo is also the god who helps ward off evil and helped people heal from diseases.

Apollo is the only Olympian who did not have a different Roman name. 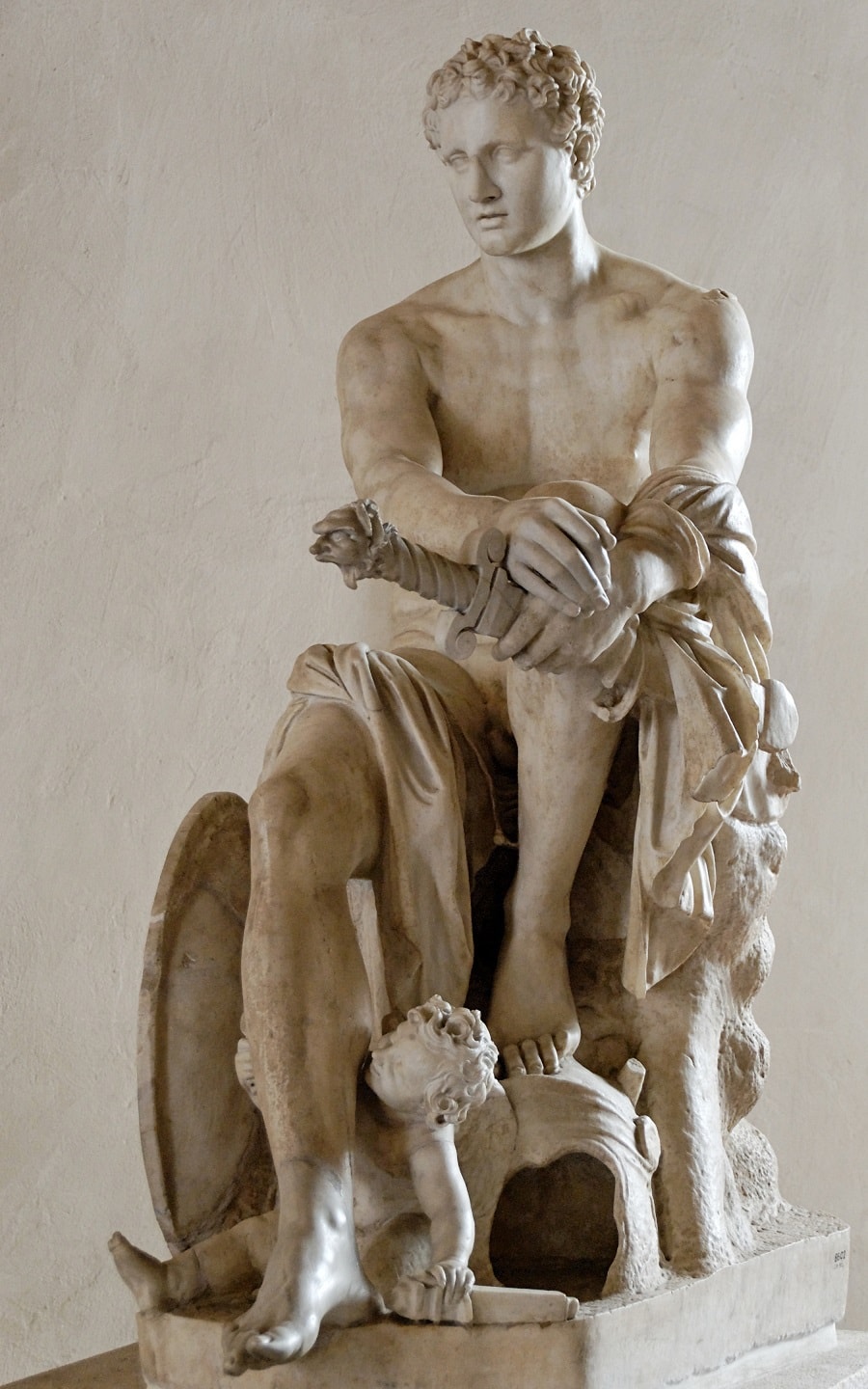 Ares, one of the few legitimate children of Zeus and his wife Hera, is the God of War. Of all the Olympians, Ares the most negative reputation due to his quick temper and bloodlust. Ares often enraged the other gods, such as Poseidon after he killed his son Halirrhothios, who had raped Ares’s daughter Alkippe. While Ares never married, he took Aphrodite as his lover even though she was technically married to Hephaestus. Ares had three children by the goddess Aphrodite named Deimos (Fear), Phobos (Terror), and Harmonia (Harmony). Due to his position as the God of War, Ares is heavily featured in stories about the Trojan War.

Ares is the father of the Amazons, who were born through his relationship with Otrera. 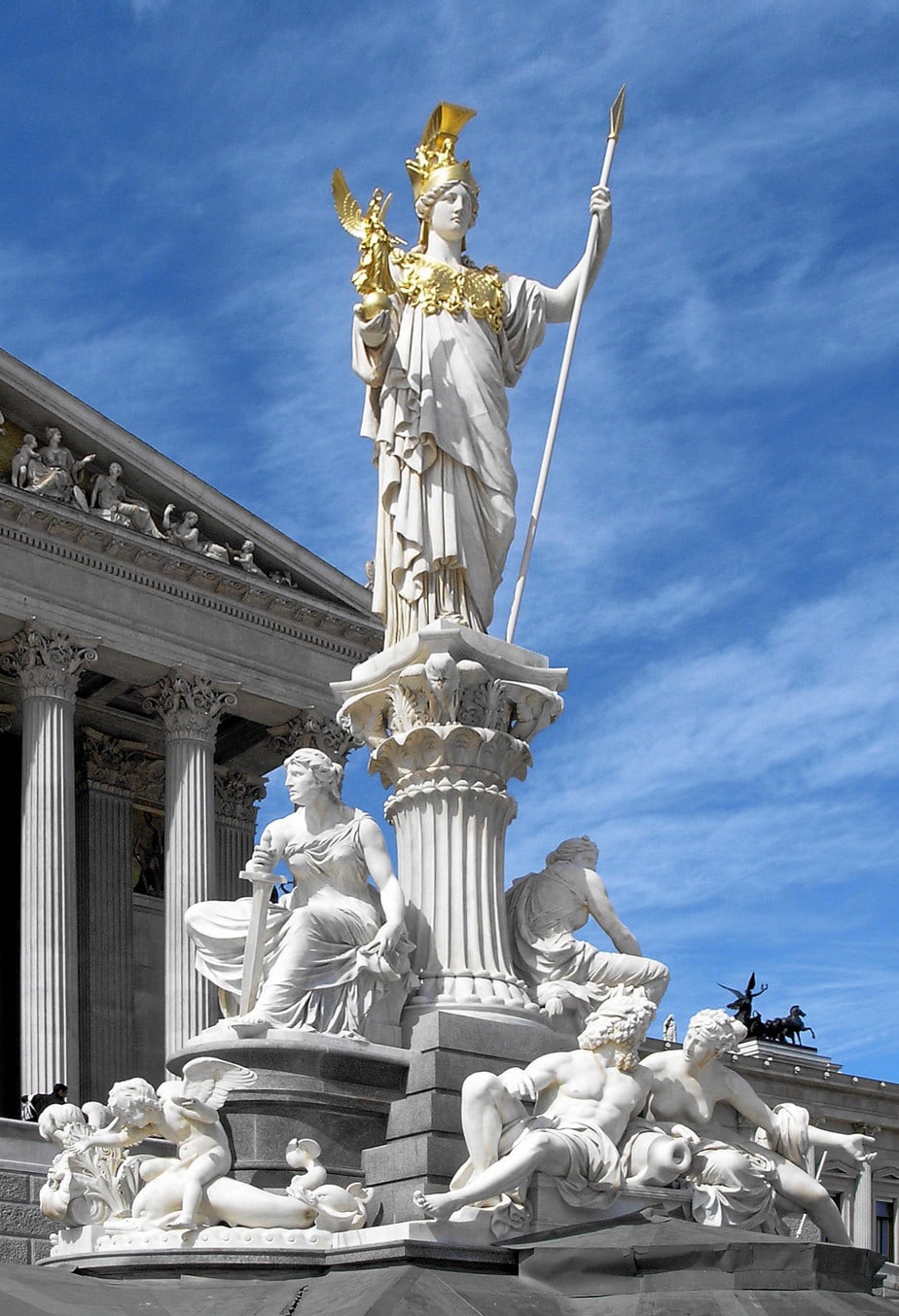 Athena, Zeus’s first born and favorite child, is the Goddess of Wisdom. According to her origin story, Athena sprang from Zeus’s head, fully-grown, after he swallowed his first wife, the Titan Metis, who was pregnant with Athena at the time. In addition to being the Goddess of Wisdom, Athena was the god of the strategical parts of war, instead of the more violent nature of war like her brother Ares.

Along with a few other goddesses on this list, Athena remained a maiden and often refused the advances of other gods, demigods, and mortals. While Athena had no children of her own, Erichthonius of Athens was her adopted son.

The Parthenon (built around the 5th century BCE), the famed temple of Athens, was built in honor of Athena and remains one of the most visited tourist attractions in Greece.

Zeus, King of the Gods, is the youngest child of Cronus and Rhea. While the rest of his siblings were swallowed by Cronus, who feared that his children would overthrow him, Zeus escaped when Rhea hid him and fed Cronus a rock instead. After being raised in secrecy on Crete, Zeus returned to help his siblings escape and defeat Cronus and the other Titans. Following the battle, Zeus, Poseidon, and Hades drew lots and Zeus was given dominion over the heavens. Zeus, along with the rest of the Olympians, lives on Mount Olympus where he oversees the affairs of mortals and the other gods. As the King of the Gods, Zeus is featured in countless myths and adventures and he fathered some of the most famous heroes.

Zeus is regarded as the founder of the Magnesians and the Macedonians. 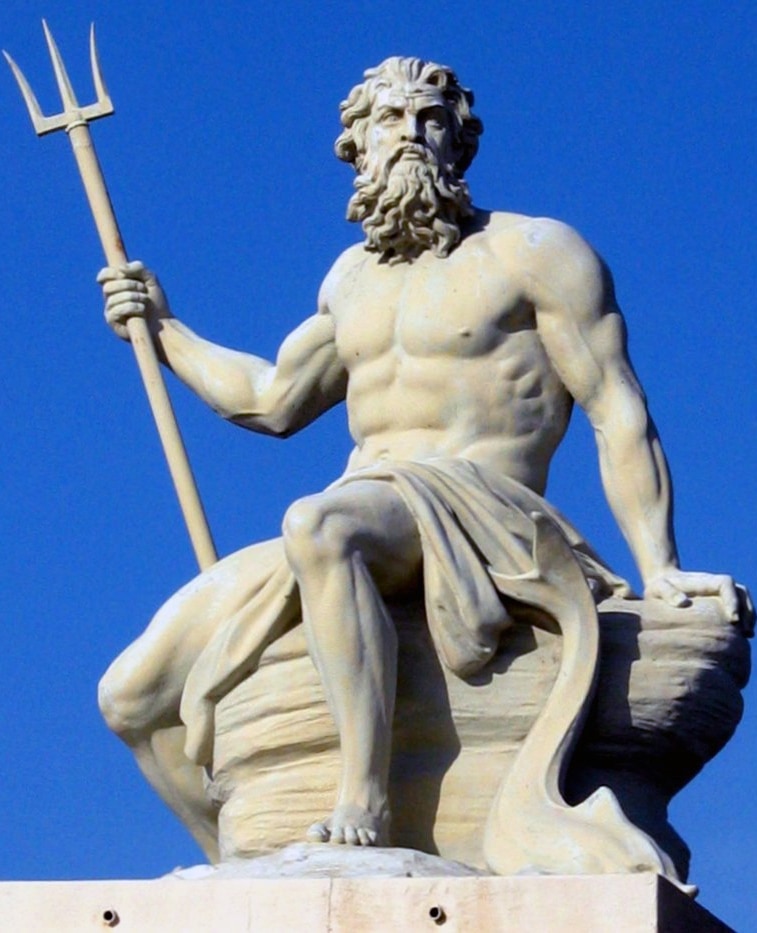 Poseidon, God the Seas, was the second youngest of Cronus and Rhea’s children and one of the most chaotic gods. As an agent of chaos, Poseidon is featured in many of the most famous Greek myths, including the origin story of Medusa, the fight with Athena over dominion of Athens, as well as the events of the Iliad and the Odyssey. Poseidon is also credited with creating the horse, a gift he offered to Athens is they chose him as their patron god. He also created the Minotaur, which lived in the labyrinth of Knossos.

Poseidon often interfered in Zeus’s plans, and even attempted to overthrow Zeus once with help from Hera and Athena. 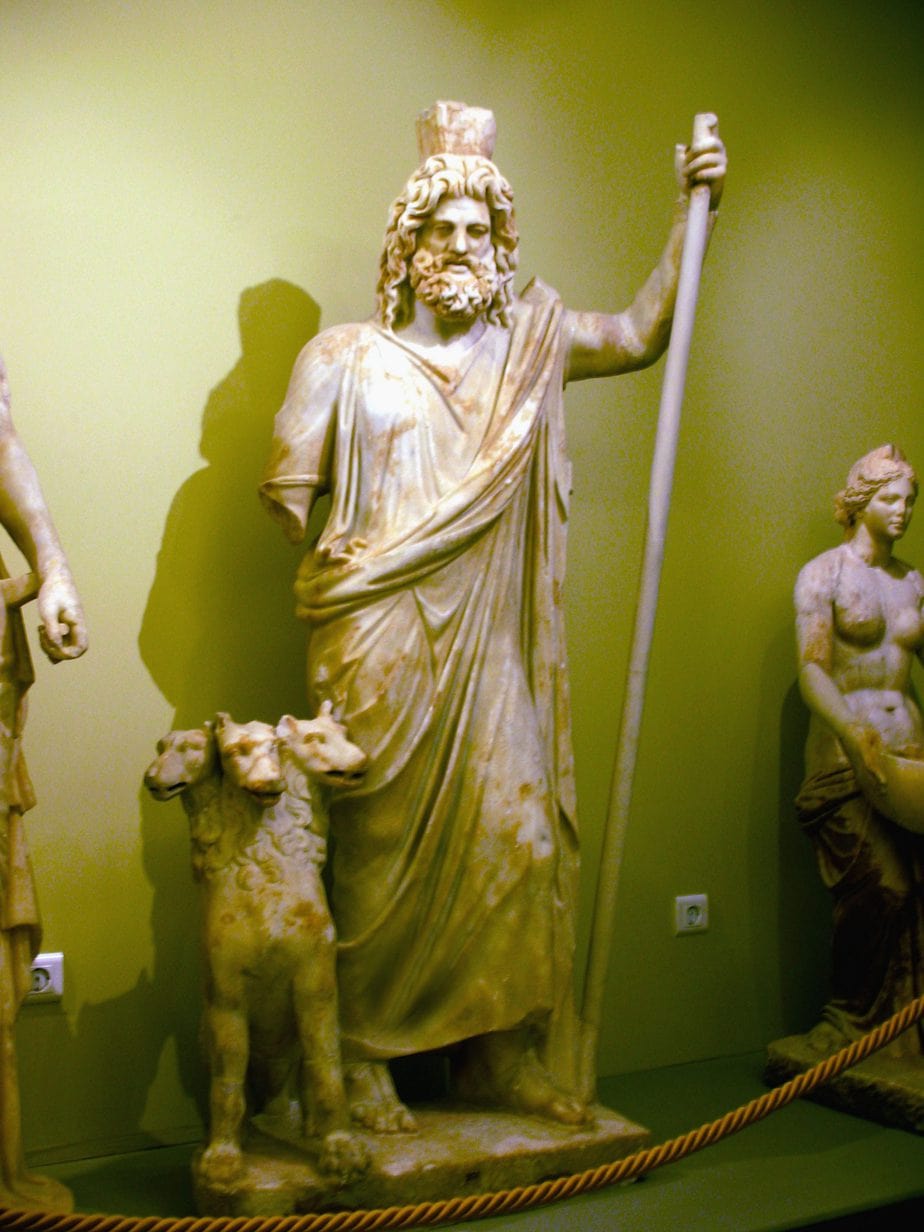 Because of his role as the King of the Underworld, the Greeks and Romans feared saying Hades name out loud and instead used epithets such as Eubuleus (giving good advice) or Pluto/Pluton (Roman name for Hades). 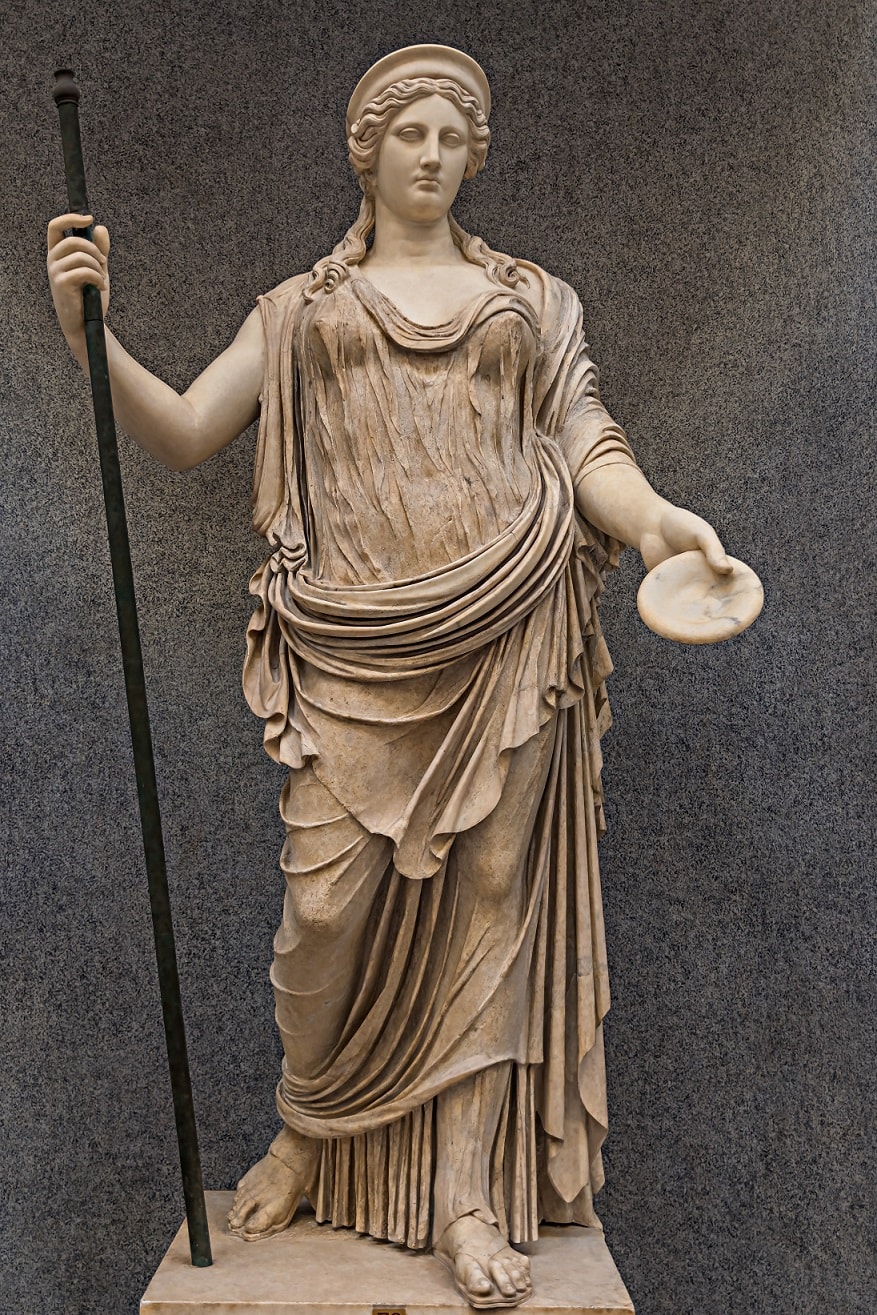 Hera, the youngest of Cronus and Rhea’s daughters, is the Goddess of Marriage and Zeus’s wife. As the queen of Mount Olympus, Hera gave birth to some of the other Olympians, including Ares and Hephaestus as well as a few lesser gods and goddesses. Hera is featured in several well-known myths, including the story of Heracles (Hercules), Jason and the Golden Fleece, and the Trojan War. While her personality can vary depending on the story, the most common depiction of Hera is as a jealous and vengeful woman who took out her anger on Zeus’s various lovers and illegitimate offspring.

Hera was one of the few Greek gods who stayed faithful to her partner and she became a symbol of fidelity and monogamy. 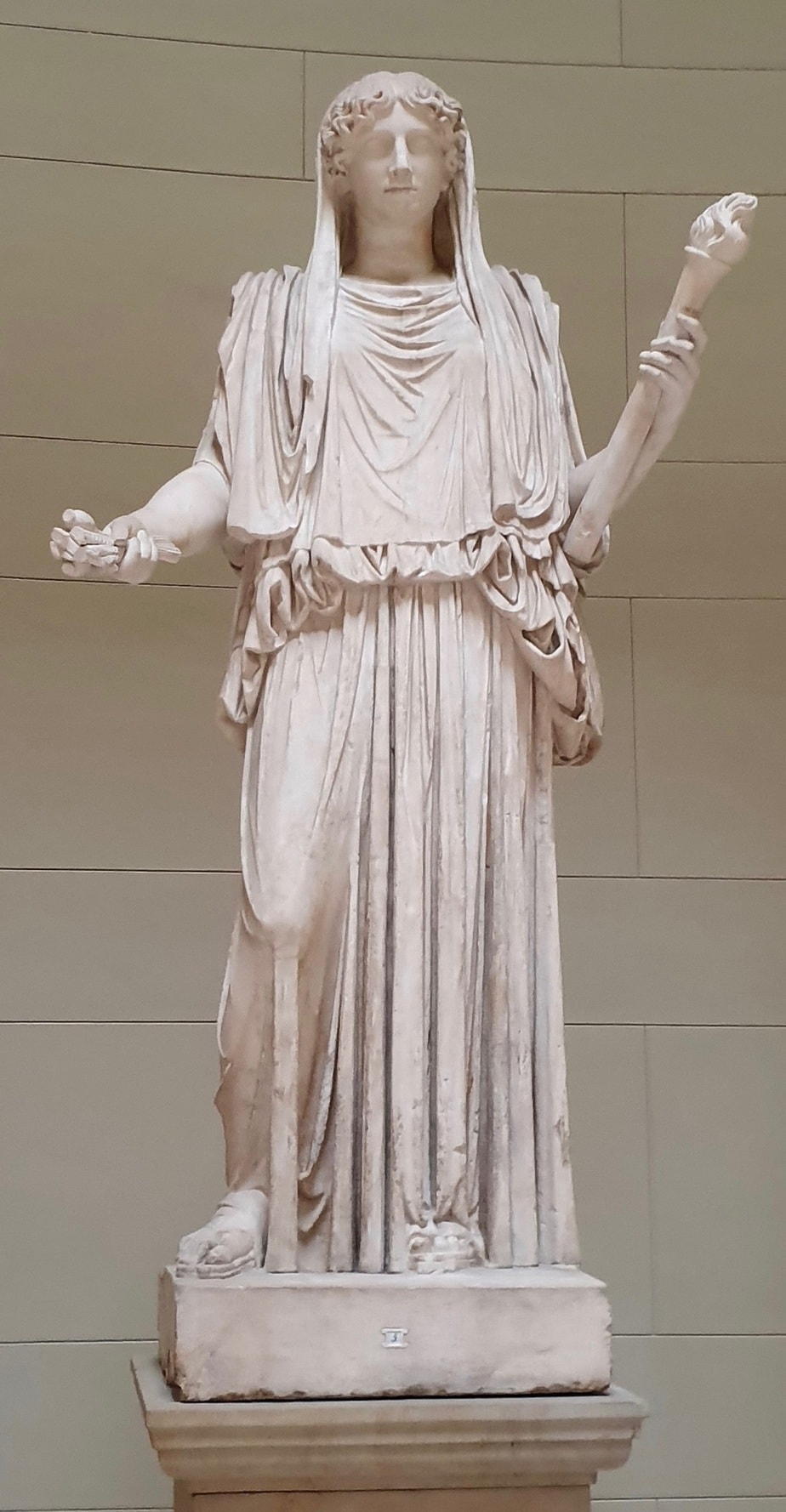 Demeter is another old god who was very important to everyday Greek life as she was the Goddess of the Harvest. Through her close connection with the earth, Demeter was responsible for a bountiful harvest and protected farming and vegetation. Besides being important to agriculture, Demeter is mostly known for being the mother of Persephone, whom Hades kidnapped and forced to be his wife. Demeter was so upset by Persephone’s kidnapping, that she caused a great drought and eventually convinced the other gods to make Hades release Persephone. Hades relented and agreed to let Persephone go, but she had to return to him for a third of the year. This myth is symbolic of the changing seasons.

Demeter’s Roman name, Ceres, is the basis for the world cereal.

Parents: Cronus and Rhea
God or Goddess of: Hearth, fire, and of the right ordering of domesticity, the family, the home, and the state
Symbols: The Hearth and its Fire
Children: None – Virgin Goddess
Roman Equivalent: Vesta 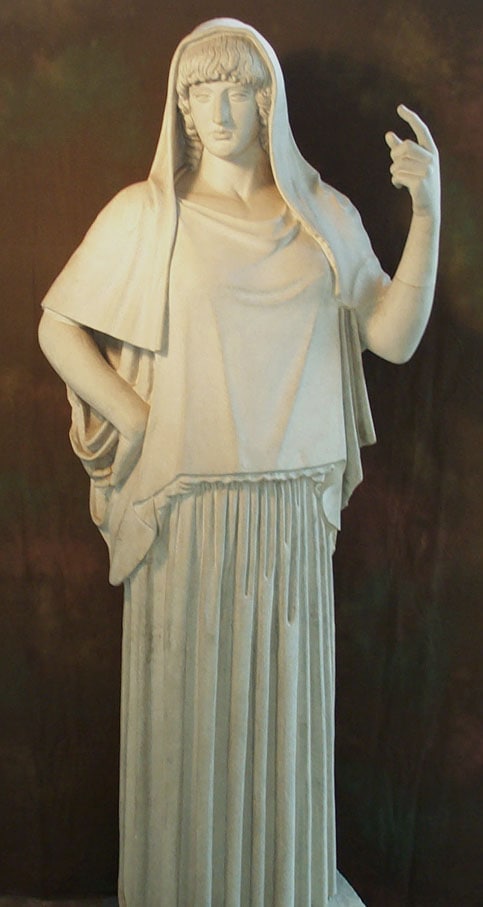 Hestia was the first born child of the Titans Cronus (Kronos) and Rhea, making her the oldest Greek God. Since Hestia was swallowed by Cronus first, she was regurgitated last, and named the oldest and youngest of the six Kronides (Zeus and his siblings). Despite being one of the Kronides, Hestia is not always considered one of the 12 Olympians and is typically replaced by Dionysus. In some myths, this is because Hestia volunteers to give up her place on Mount Olympus, preferring not to get involved in godly affairs. As the Goddess of the Hearth and Home, Hestia was revered by the Greeks and offerings were regularly made to her at the hearth within each private home and at the town or city’s communal hearth.

As the eldest god, traditionally, Hestia received any sacrifices before the other gods, including the first and last drink offering at any feasts. Additionally, Hestia was usually mentioned first in any prayers and oaths.

Posted by Victor Eaton 0
Spread the loveIt is unclear when the first Muslims actually came to America. However, many historians believe that the earliest…