The oldest churches in the United States range from Catholic Cathedrals to Quaker meeting houses. Since America was founded as a mix of religious outcasts, refugees, immigrants, explorers, royal charters, and more, the United States is home to many venerated, antique churches. New York City exemplifies this variety.

For this list, we are looking at Catholic Churches in NYC, not including the Episcopal chapels. Though there is some debate about how closely the Episcopalians follow the Catholic doctrine, they are not aligned with the Pope or part of the traditional system of dioceses. Therefore, we’re sticking to the main Catholic structure for this list.

Here are the 8 oldest Catholic Churches in NYC.

8. Church of the Ascension 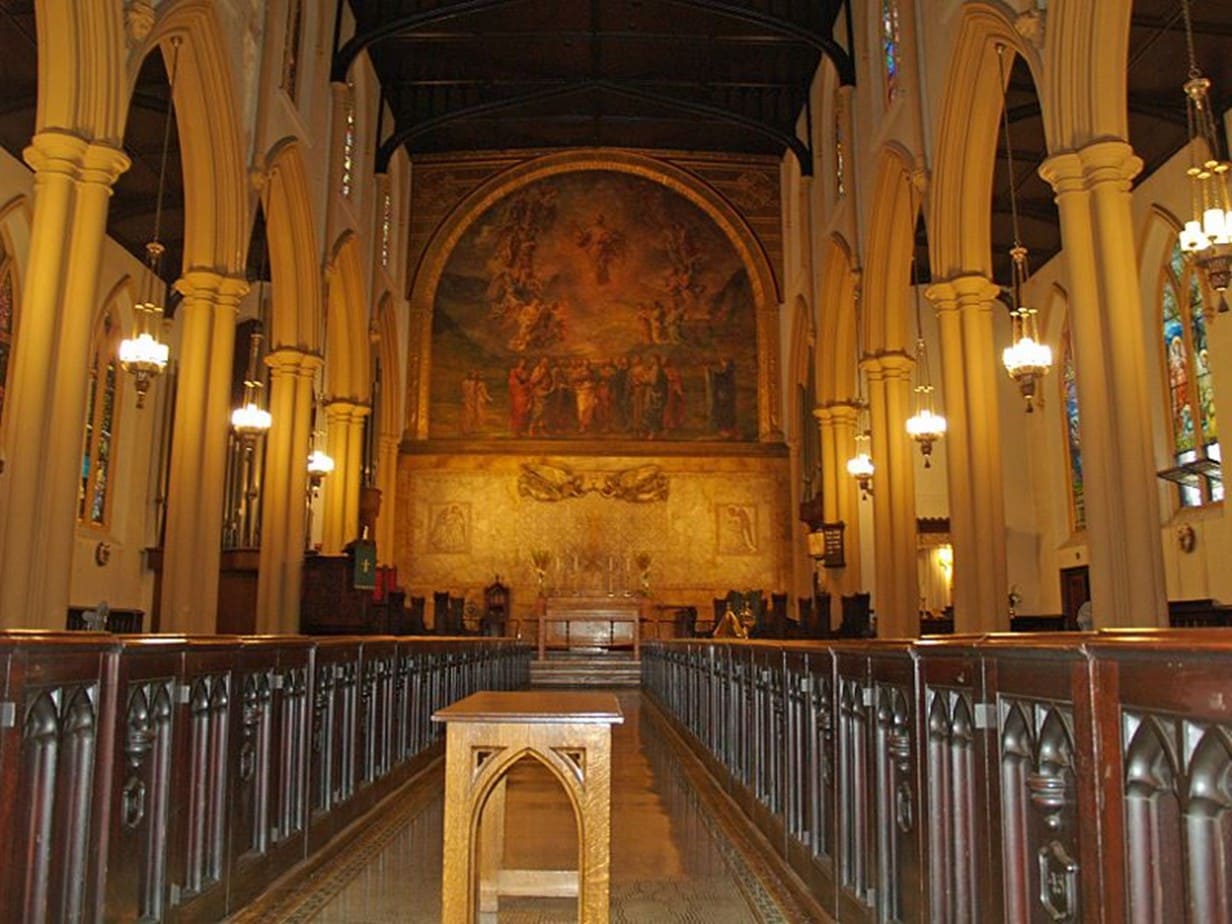 This Roman Catholic parish church is in the Manhattan Valley area of the Upper West Side. The church and its attached parish were built in 1897 in the architectural style of the Sicilian Romanesque. This style combined Byzantine and Norman designs favored by the German-American architects, including the folks at Schickel & Ditmars.

The Church of the Ascension received a four-story parochial school in 1911. It was also renovated in 1939, during which the famous Muller & Abel organ was replaced with a two-manual pipe organ.

The Church of the Ascension’s elaborate architectural design has been used several times in movies and television. It was featured in the rom-com, Keeping the Faith (2000), and the first season of the police procedural, White Collar (2009). 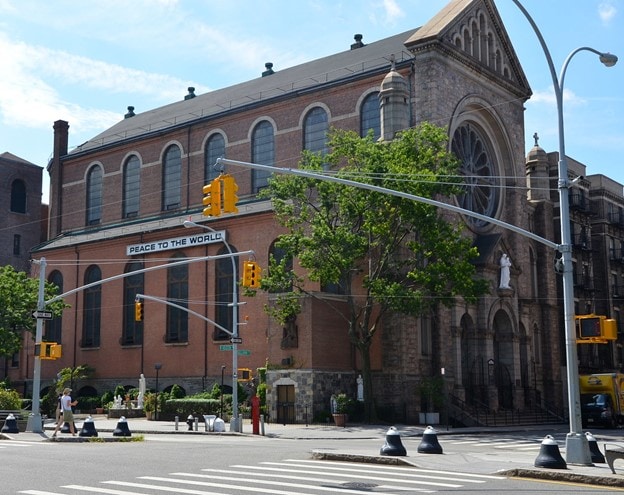 The St. Anthony of Padua Church is in the South Village of Manhattan in NYC. In 1859, it was founded as the first United States parish designed to cater to Roman Catholic Italian immigrants. John Hughes, the Archbishop of New York, offered a priest named Sanguinetti the chance to serve New York Italian Catholics by giving mass in their native language. Hughes had observed that the lack of Italian language services had caused many immigrants to join other denominations.

Sanguinetti returned to Italy within a year, but the congregation kept the work alive through Father Pamfilo, who re-established the Padua Church ministry in 1866, building the modern building in 1886. It has been there ever since.

The church’s modern façade was built in 1886 by Arthur Crooks in the Romanesque Revival architecture style. This style was used in the mid-1800s to tribute the Roman architecture of the 11th and 12th centuries. It was very popular in Germany and the United States university designs of the 19th century. 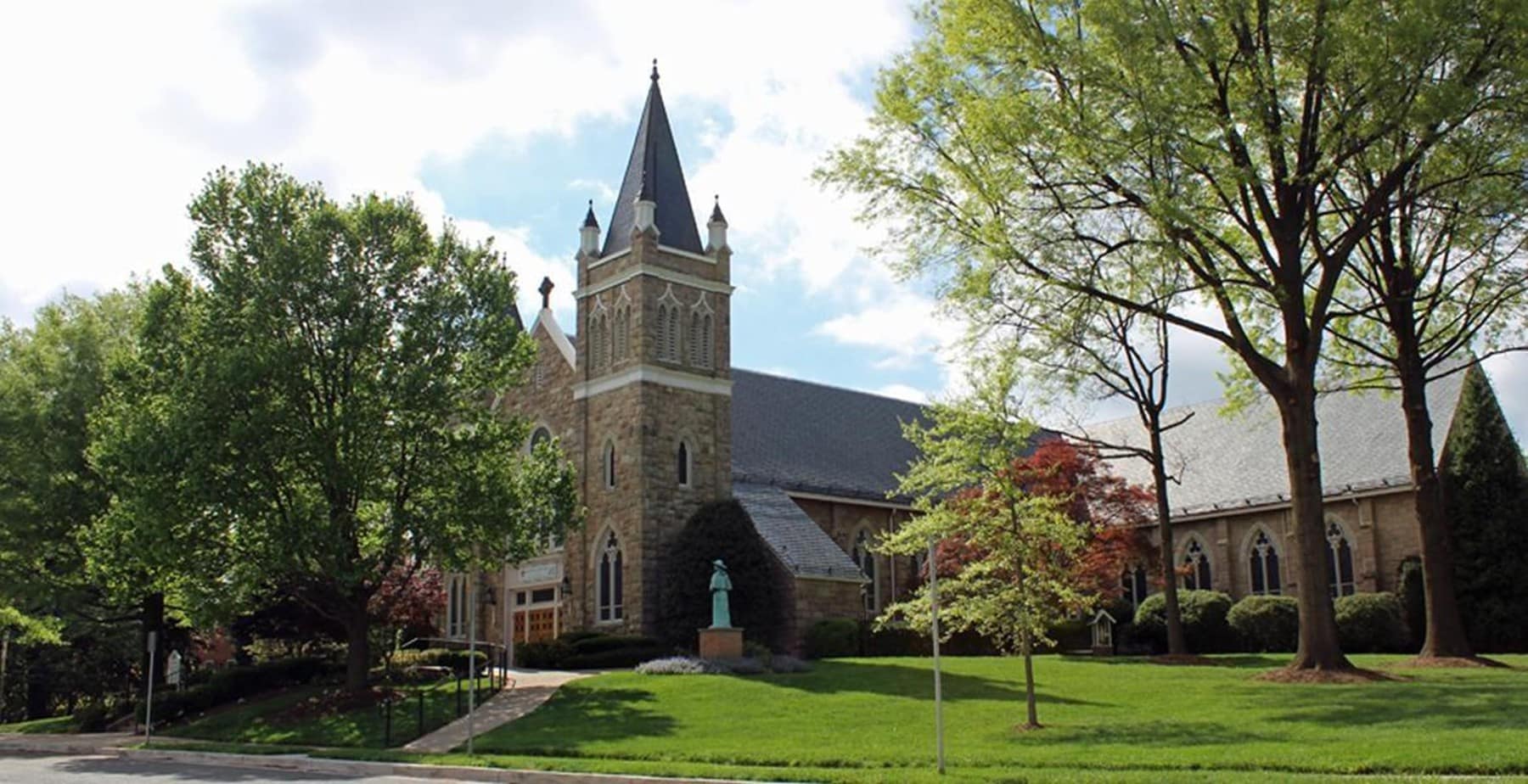 The St. James Roman Catholic Church on James Street in Lower Manhattan (right in the Two Bridges neighborhood) appears as an architectural mishmash from the outside. Doric columns in the ancient Greek style (the ones with circular ends) adorn the entrance of the church. Meanwhile, the building is built in the neo-Classical style of Western Europe. Its design has been tentatively assigned to Minard Lefever, but this has never been proven.

The church was used regularly for over 150 years until it was ordered to be closed in the 1980s due to the state of its roof. The Ancient Order of Hibernians, however, organized the church to be saved and repaired.

Alfred E. Smith, who was the Democratic candidate for president in 1928 and the Governor of New York, began life as an altar boy at the St. James Roman Catholic Church. 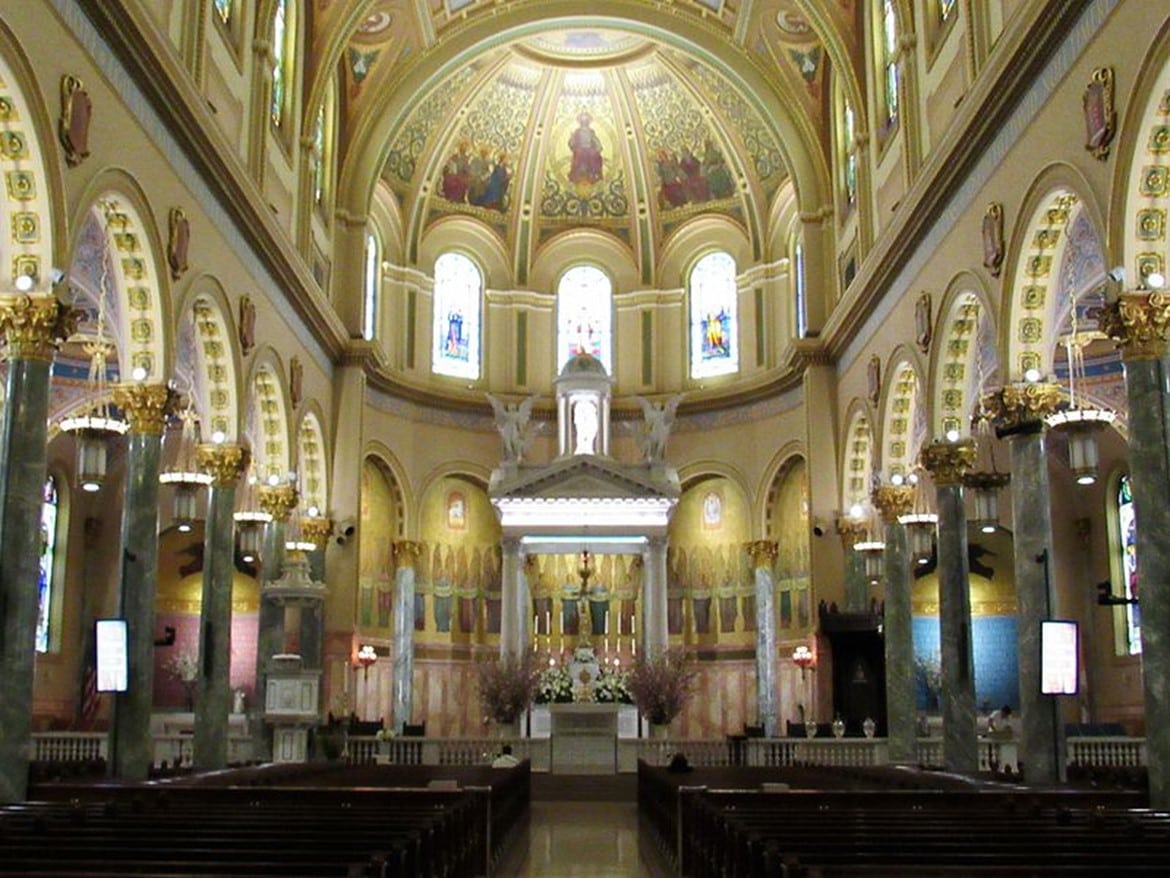 In 2018, St. Joseph’s Parish received major restorations, including a built-in confessional, new ventilation, and a new ceiling. Statues removed from the sanctuary since 1972 were restored in the hope of recapturing the original centuries-old mystique of the old parish.

St. Joseph’s Parish is also famous for its outreach programs, New York University clubs, lectures, and other programs. These include a soup kitchen that has operated continuously since 1976, first as a church program and beginning in 2015 as an independent charity. 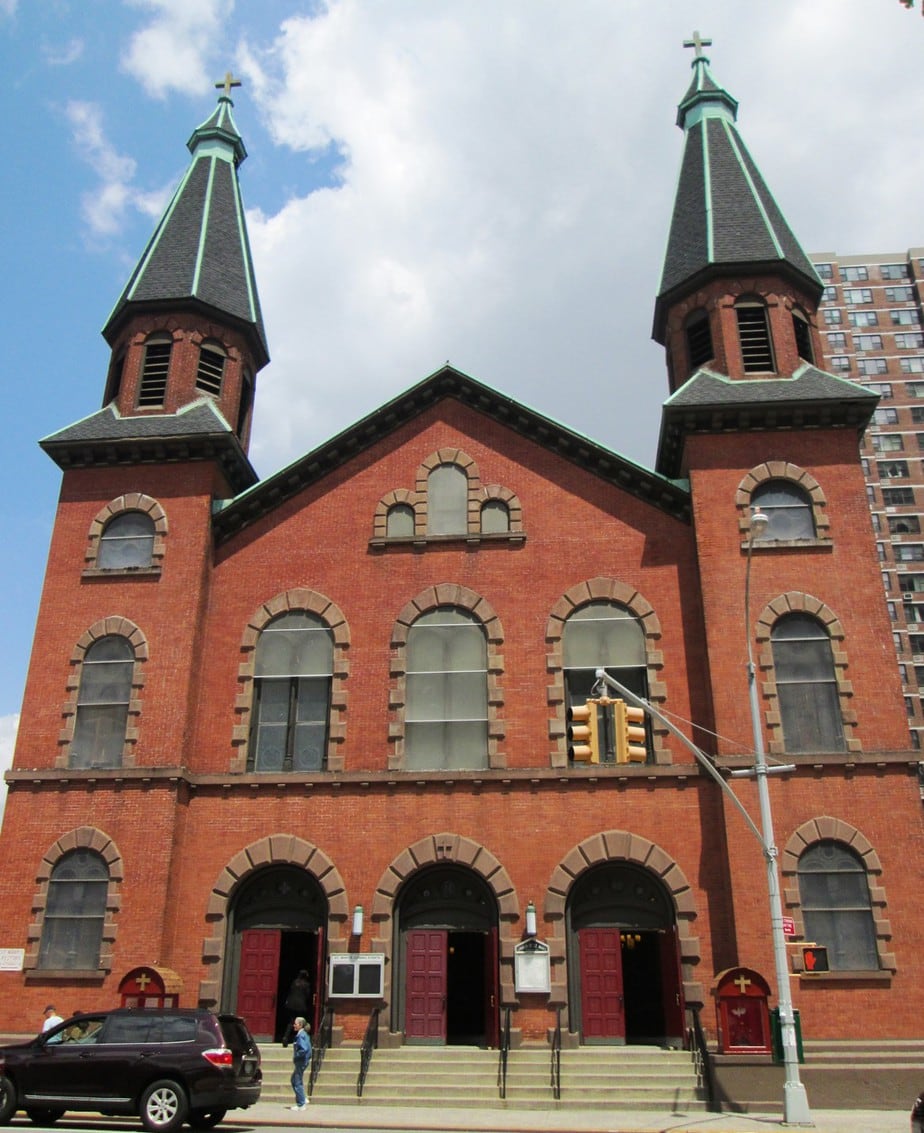 Services for St. Mary Church began in the building of a former Presbyterian church. Nativists (an anti-Catholic political group) burned the church down in 1831, though it was not destroyed. The first cornerstone for the modern St. Mary Church was laid in 1832.

The church was built in the Greek Revival style, which was later combined with a Romanesque façade in the 1860s, which included twin spires.

The Ancient Order of Hibernians is an Irish Catholic fraternal organization founded in 1836. They act as a kind of militia to protect Catholic churches and parishioners from anti-Catholic movements, including those who face discrimination at work. They have been linked with the Irish secret society known as the Molly Maguires.

Their New York chapter was founded in 1836 after the attack on St. Mary Church and St. James Church. 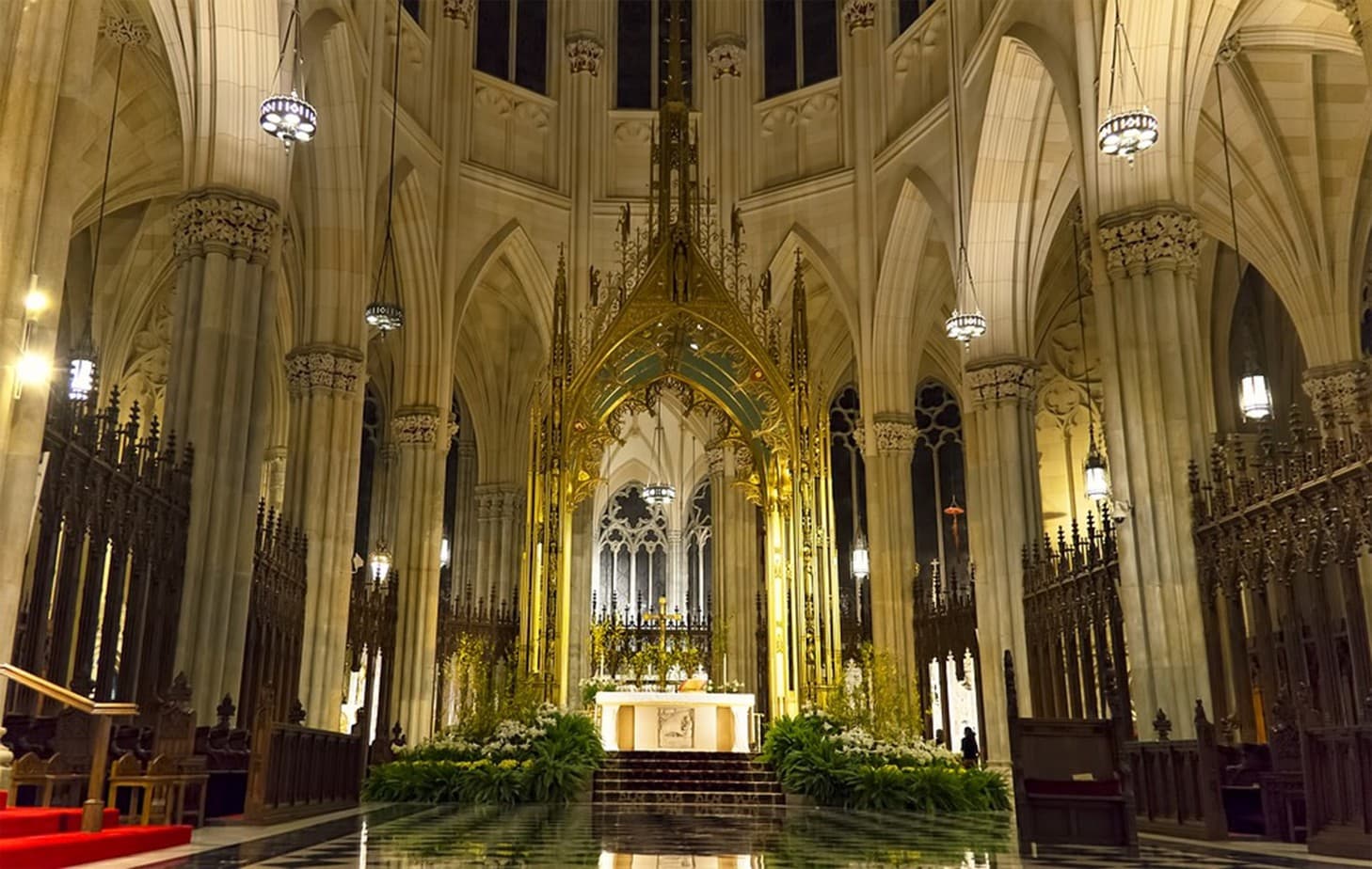 Also called the Basilica of St. Patrick’s or Old St. Patrick’s, St. Patrick’s Old Cathedral on Mulberry Street in the Nolita neighborhood of NYC (it’s in Lower Manhattan) is one of the oldest Catholic churches in the city. Mangin designed it in the Gothic Revival style and began construction in 1809. It was completed in 1815.

Originally, Old St. Patrick’s was appropriately the endpoint for the New York City St. Patrick’s Day parade. Over the years, the church has experienced many hardships, including an attempted sacking in 1836 and a fire in 1866.

The attempted sack in 1836 was the result of tension between the Know Nothings and Irish Catholics after Maria Monk published her memoirs. Monk claimed to have been repeatedly raped and tortured by priests, leading the anti-Catholic Know Nothings to attempt an assault on the church. It was defended by an Irish Catholic militia wielding muskets and Monk’s claim was debunked.

2. Church of the Transfiguration 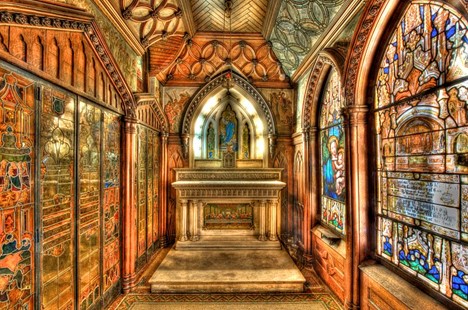 The Church of the Transfiguration was built in the Georgian architectural style, popular in English countries in the mid-late 1700s and early 1800s. The church was originally built for the congregation of the Zion Protestant Episcopal Church, which sold the building in 1853 to the Church of the Immigrants, a Roman Catholic Parish founded in 1827.

On the Lower East Side of Manhattan, this church became well-populated after Protestant residents moved to the North Side. The Church of the Transfiguration began to serve Irish, Italian, and Chinese Roman Catholics.

The Church of the Transfiguration is now primarily a Chinese Roman Catholic church and school. The masses on Sunday are given in English, as well as Cantonese and Mandarin. 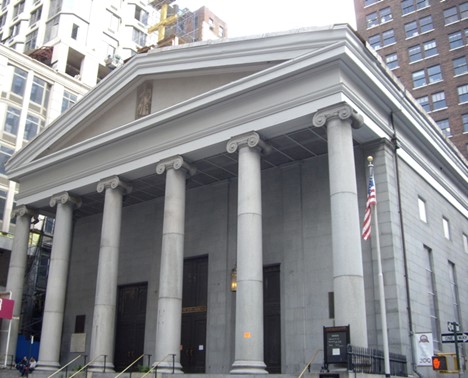 The oldest Catholic Church in NYC is St. Peter’s Church. This church was the foundation for the Catholic diocese’s presence in New York City. It began as Old St. Peter’s Parish, founded in 1785, and remains on the same soil on which it was built. The church was used regularly until the ceiling collapsed in 1836, making it necessary to expand the building. St. Peter’s Church had such a large congregation that before the new complex was completed, many listened to Mass from the outside.

The neighborhood transitioned to a business district in the 1830s, something that the parishioners feared. However, their attempts to move the church were thwarted by John Cardinal McCloskey, who consecrated the location to leave St. Peter’s as it was (and still is).

Being established in 1785 means that St. Peter’s Church predates the United States’ first Bishopric, which is in Maryland, founded in 1789. St. Peter’s was built only two years after the end of the Revolutionary War!

The oldest Catholic churches in New York City are religious institutions, historic landmarks, and city traditions. They are beautiful facades, often designed in Romanesque or revival styles, and could be over 200 years old. These 8 churches represent the oldest Roman Catholic institutions in New York City, which makes them some of the most venerated in the United States.

Posted by Lauren Johnson 2
Spread the loveChurches are some of the most majestic buildings in existence. Since the dawn of time, civilizations and cultures…