Commonly, 1943 is cited as the birth of the ZIP code in the United States. However, several variations pre-date it, making the oldest ZIP codes or zone codes historical necessities, rather than merely modern conveniences. Read on for an in-depth look at the oldest ZIP codes, where they came from, and why they were used. 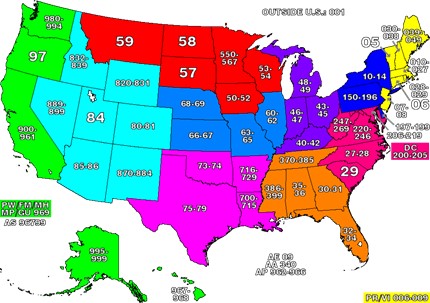 ZIP codes between 1963 and 1983 were only five digits long. This worked perfectly well for houses on city streets or buildings. However, more specific addresses still slowed down mail delivery times due to the imprecise nature of the five-digit system. This is why ZIP+4 was put into effect.

For example, people living in dense groups of apartments, with specific PO boxes, or on especially crowded city blocks, could be further differentiated by a ZIP code using the +4 system. This adds four digits to the code to make mail sorting and delivery more efficient.

This add-on gives the character readers at the post office the ability to scan an address and automatically know the +4 code. It sorts the mail accordingly based on the 11 digits in total that a ZIP code now has – five for the ZIP, plus four, and two more to differentiate the delivery point.

Every PO box has a +4 ZIP code to make it easier on mail carriers. However, people resisted the standardization of the +4 system on their own deliveries and generally don’t list it. In any case, the +4 code is not a required part of listing a delivery address; the post office decided that it could not be reinforced. However, every PO box still technically has one and businesses often use them, especially in rented office buildings, to ensure that their deliveries make it on time.

The add-on or +4 digits can take multiple forms. They can be the last four digits of the box number, a zero plus the last three digits, or a smaller box number with enough zeroes before it to make four numbers total. Since there is no rule for ZIP+4 codes, each has to be looked up separately, for instance, using the ZIP Code Lookup on the United States Postal Service’s website. 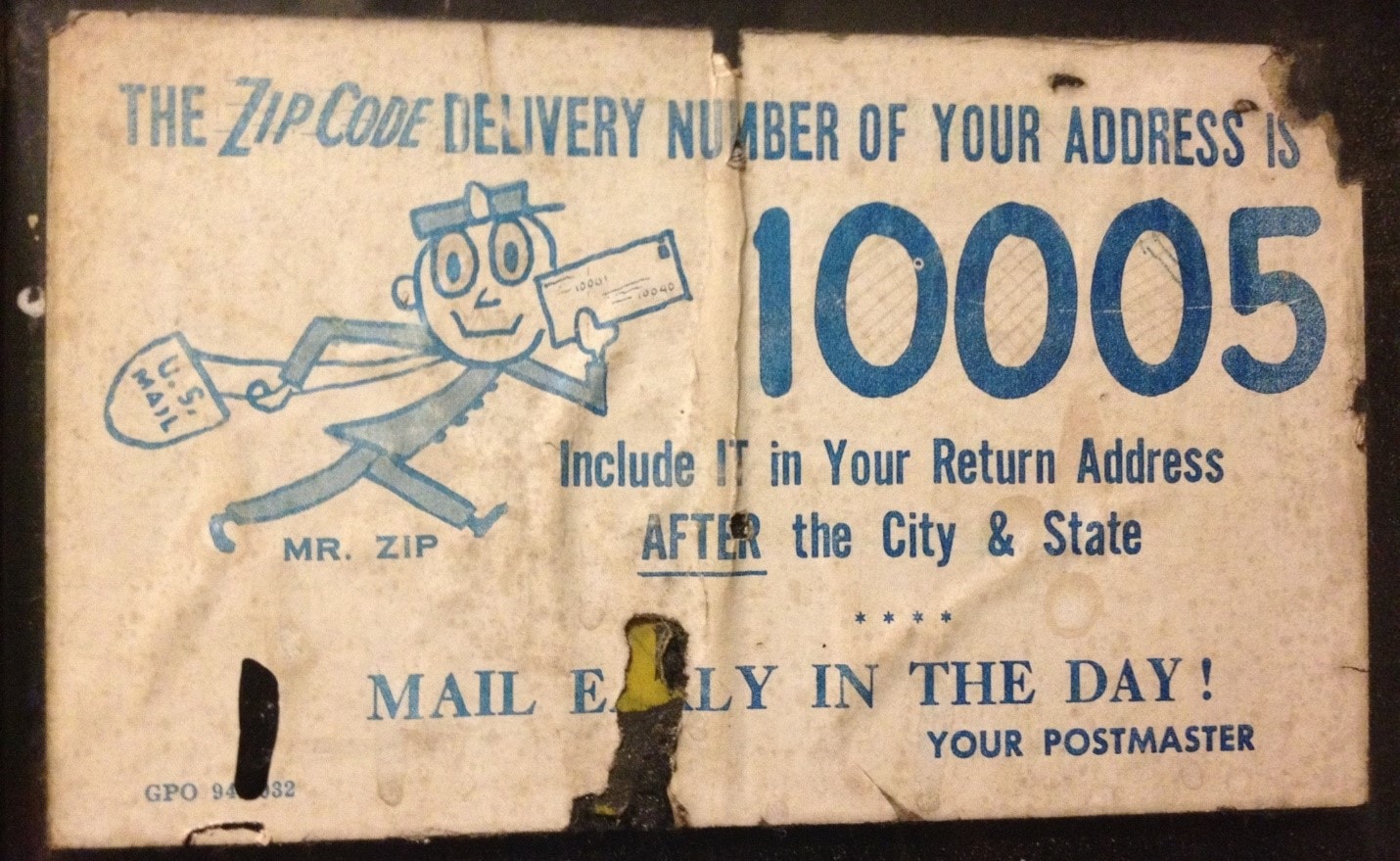 By 1963, the “baby boom,” or post-war population boom, had caused urban growth in the United States to reach a point that the post office needed major reform to keep up. Between 1943 and 1963, mail volume in the U.S. had nearly doubled, which made any flaws in the post office’s sorting and distribution system incredibly apparent.

Therefore, the internal advisors to the post office suggested the creation of the Zone Improvement Plan (ZIP). This plan sectioned the entire United States into separate delivery regions, each with its own number. These 5-digit regional codes were the first modern ZIP codes.

The first 2-3 numbers informed mail carriers which states the mail was traveling to. Large population centers like New York and San Francisco began with larger double-digit numbers while smaller population centers in the mid-West had only 5 digits.

The first ZIP code ever given out was 00601, given to Adjuntas, Puerto Rico. It was the first zone established by the Zone Improvement Plan. The next was 01001, given to Agawam in Massachusetts. Due to its number, this is sometimes misattributed as the first ZIP code. However, it was simply the starting point for zone separation in the continental United States after Puerto Rico had been divided into regions.

At first, people didn’t approve of ZIP codes. According to U.S. Postal Service historian Jennifer Lynch, there was a feeling of depersonalization among the populace, that ZIP codes were turning them into cogs in a machine.

To address these concerns, the post office created a marketing campaign centered on Mr. ZIP or “Zippy.” He was designed by a letter carrier’s son, Howard Wilcox, to encourage mailers, especially of older generations, to include ZIP codes.

Technically, including ZIP codes isn’t required, which meant that stubborn older mailers represented a financial burden to the post office, which was obligated to deliver mail, even at First Class speeds, regardless of whether there was a ZIP code on it.

Mr. ZIP encouraged children to always use ZIP on their letters in the hope that their parents and grandparents would ease into it. Apparently, it worked. 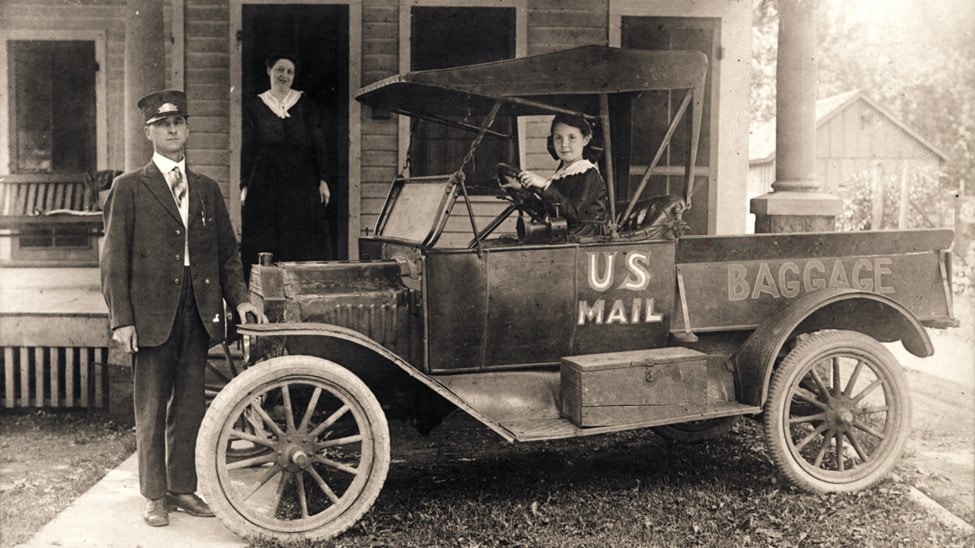 In 1943, despite local post offices dabbling with the idea in the 1920s, the United States still did not have a ZIP code system. However, World War II ended up making this a necessity, leading to the creation of what we now think of as the ZIP code.

With the draft and enlistment rates so high during the war, many male postal clerks had left the country to fight in Europe. This meant that many districts no longer had their experienced postmen to sort and deliver mail to a region that they had become intimately familiar with.

As a result, the mail sorting in this country was in chaos for a while. For the biggest American cities, the Post Office Department, as it was called back then, knew that the status quo wouldn’t do.

This is why they instituted a system of “postal zones” similar to postcodes in England. These were 1 or 2-digit numbers followed by the name of the city. Young, often inexperienced postal clerks covering for their veteran counterparts now had a shortcut to help them with complex mail sorting and delivery issues.

This zone system was used in major American population centers for several decades before changing. While not quite the standardized ZIP code system yet, these postal zones served their purpose during the war and gave the post office the groundwork to later establish the ZIP codes we know today.

At the time the postal zones were created in the United States, the postal clerks couldn’t handle the volume of 20 million units of mail per year. Imagine how hard it would have been at the post office’s height, in 2006, when the office delivered over 213 billion pieces of mail in one year. 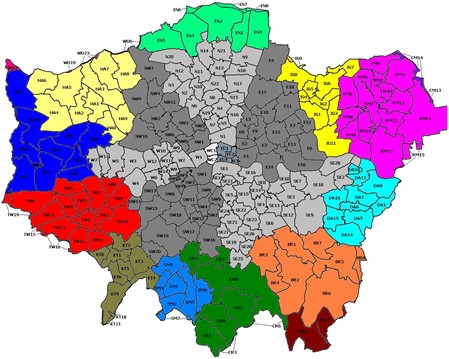 The history of the ZIP code actually begins in London in 1858. Before the use of postcodes (this is what ZIP codes are called in the UK), letter addresses simply stated the recipient’s name, street address, and house number. This worked when settlements were small. But population booms in urban centers in the mid-1800s made postal reforms necessary.

To make mail easier to sort, the post office commissioned an ex-English teacher by the name of Sir Rowland Hill to come up with a better system. What he devised – separating London into larger “postcodes” to send mail to its general region earlier in the sorting process – is the birth of what we now call the ZIP code.

He created it by dividing London into circular chunks radiating from the post office. From this grid, he created 10 “postal districts,” comprised of two regional areas and eight directional points that indicated their placement on the circle.

To deliver mail to these postcodes, the post office opened local offices in each of them to receive and sort the mail marked with its postcode. This led to more sub-districts and regions being formed and assigned their own code.

Sir Rowland Hill’s idea improved efficiency so much that he served as Postmaster-General of the London area until 1864. Though the codes have merged and changed with population changes (the NE London code, for instance, merged with the E code), Hill’s system is still used in London today.

Importantly, Hill’s original system was arranged using geography. Once more districts were divided, however, they began to be sorted alphabetically. This means that SW1 and SW2 postal codes may not be regions that are close to each other.

ZIP codes technically go back to the postal zones of 1850s London. However, in America, the standardized ZIP code was invented as a way to deal with wartime adversity. It used to be isolated to populated urban areas but is now used to help the busy postal service deliver hundreds of billions of packages per year. This brief history shows that sometimes adversity is the original cause of routine. So long as Mr. ZIP is there to help you out.

Posted by Victor Eaton 0
Spread the loveFor decades, geologists have attempted to unearth greater knowledge about our planet by studying rocks. Like looking at…

Posted by Lauren Johnson 0
Spread the loveWhether it’s figuring out which freeway exit to take or discovering a new country to visit, maps allow…