Humans have been making maps for thousands of years and the history of cartography (mapmaking) can be traced all the way back to ancient cave paintings. These early maps depicted the stars and showed how constellations would have looked at the time. As human’s gathered more knowledge of the world, the first maps of the known world started to appear.

The ancient Greeks are largely responsible for developing geography and extensively describing what they new about the world and its people at the time.

While copies of most of these maps don’t exist, they have been reconstructed because of the detailed notes that the Greeks kept.

Year Created: Uknown – believed to be no earlier than 20 BCE
Country of Origin:  Anatolia during the transitional period of the Roman Republic into the Roman Empire (modern-day Turkey)
Creator:  Greek geographer, historian, and philosopher Strabo
Materials Used:  Ink and parchment
Area Depicted:  The known world at the time to the ancient Greeks and Romans

The Greek geographer, philosopher, and historian Strabo is mostly known for his geographical encyclopedia titled Geographica (not to be confused with Eratosthenes’ work). Unlike other geographical works from the time period, nearly all of Strabo’s 17-volume work has survived and it great historical insight into this time period.

Strabos decided to approach geography through what he believed was more practical than focusing on the number and precise positions of places. Instead, Geographica provides a descriptive history of the people and places that were known during Strabo’s time. Strabos traveled extensively and took notes and also gathered information from earlier works to compile his book.

During his life, Strabo’s Geographica was underutilized and unappreciated but it survived because several copies were made during the Byzantine Empire and it became a standard in other parts of Europe. 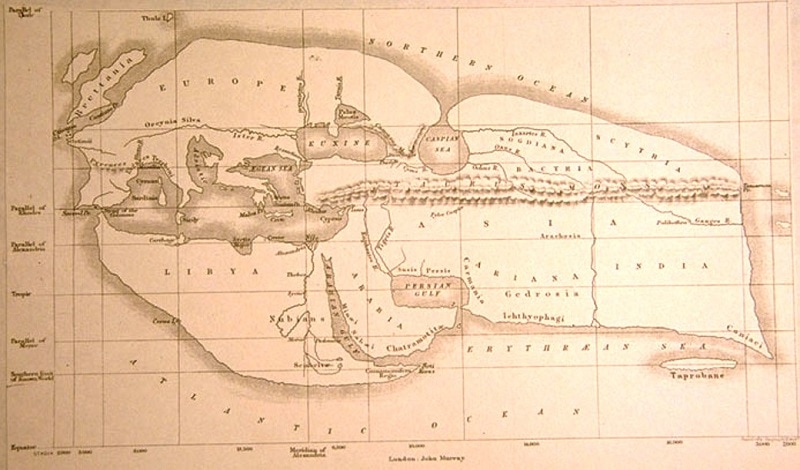 Although earlier Greeks created world maps and studied lands, Eratosthenes is known as the “father of geography” and is credited with inventing the discipline and coining the terminology still used today. Eratosthenes was not only a geographer, but he was also a mathematician and astronomer which helped him create a more detailed and accurate world map.

During his time as chief librarian at the Library of Alexandria, Eratosthenes wrote a three-volume work titled Geography (Geographika in Greek). In the book, he described and mapped the entire known world and divided the Earth into five climate zones.

Eratosthenes was also the first person to place grids over his map and used parallels and meridians to link together every place in the world. His map also featured over 400 cities and their accurate locations, which had never been done before. 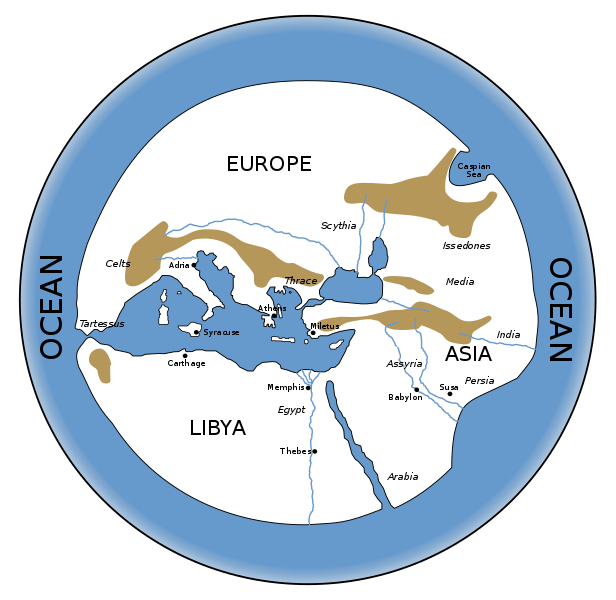 Hecataeus of Miletus was the first known Greek historian and geographer. Hecataeus lived in the same city as Anaximander, who is credited with creating the first world map. However, they did not live at the same time but Hecataeus was inspired by Anaximander’s work and added improvements to his world map.

Hecataeus’ version of the world map was more detailed and accompanied by a book called the Periodos ges. The book was a comprehensive work on the known geography of Europe, Asia, and Africa at the time.

In addition to detailing the known lands, Hecataeus included information about the people and places that a person would encounter if they followed his map from the Straight of Gibraltar clockwise to the Black Sea. 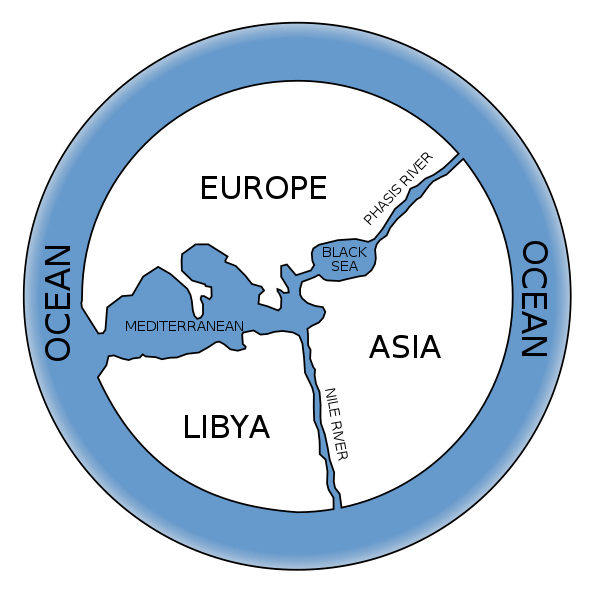 Although there were older maps drawn in ancient times, the pre-Socratic Greek philosopher Anaximander is often credited with being the first person to publish a map of the world. Unlike earlier maps — which featured roads, towns, and other geological features — Anaximander chose to show all of the inhabited lands known to the ancient Greeks.

In this way, Anaximander’s map was the first world map.

No copy of Anaximander’s map exists but there are written records that describe in detail what the map depicted. The map shows what was known of Europe, Asia, and Libya (the name given to the region of Africa that was known at the time), the Mediterranean Sea, the Black Sea, the Nile, Lake Maeotis, and the Phasis River (now called the Rioni).

5. Babylonian Map of the World 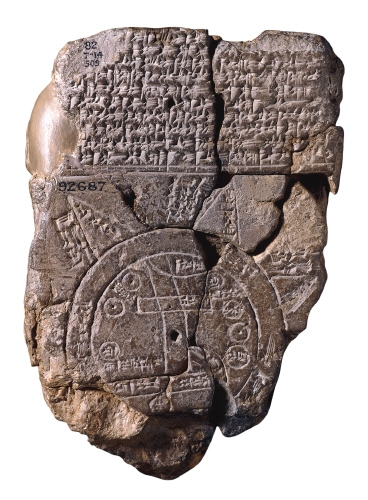 The Babylonian Map of the World is considered the oldest world map as the map depicted the known world at the time. The areas on the map are labeled and the clay tablet also contains a short and partially lost description written in cuneiform.

The map is circular and features two outer defined circles. The center of the map shows the Euphrates river flowing from north to south and the city of Babylon is shown along the river. Some of the other cities shown on the map include Uratu, Susa (the capital of Elam), Assyria, and Habban. The map also shows a mountain, the ocean (labeled as “bitter river”), as well as unknown outer regions beyond the Ocean.

The Turin Papyrus Map is widely considered the oldest existing topographical map from the ancient world. The map was created around 1160 BCE and due to diligent ancient Egyptian record keeping, researchers know who drew the map and what it was for.

The map was drawn by a well-known scribe Amennakhte and prepared for Ramesses IV, who wanted to quarry the Wadi Hammamat in the Eastern Desert. Ramessess IV wanted to use bekhen-stone (metagraywacke sandstone) to build statues of himself.

Depicted in the map is a 15-kilometre stretch of Wadi Hammamat and shows where the wadi merged with wadis Atalla and el-Sid. The map also shows the surrounding hills, the bekhen-stone quarry, and the gold mine and settlement at Bir Umm Fawakhir.

In addition to being the oldest topographical map, the Turin Papyrus Map is also the earliest known geological map because it showed the local distribution of different rock types, the diverse wadi gravels, and contained information on quarrying and mining. 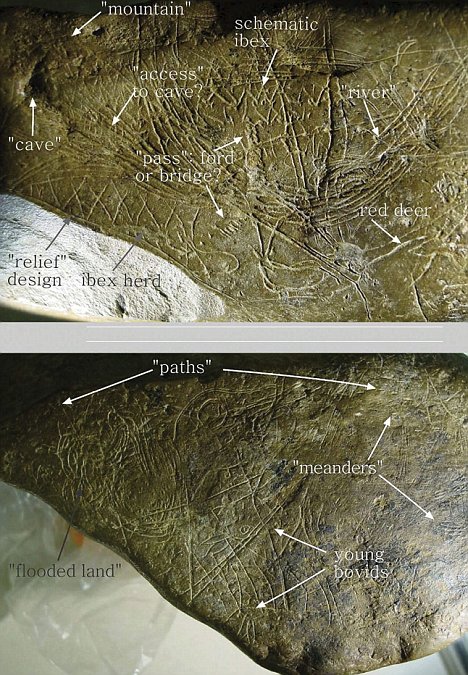 The map engraved into a hand-sized rock found in the Abauntz Lamizulo cave in the Navarre region of Spain is believed to be the oldest map ever found in Western Europe. The rock was initially discovered in 1994 but it took researchers about 15 years (2009) to decipher the meaning of the etched lines.

According to the research team led by Pilar Utrilla from the University of Zaragoza in Spain, “All of these engravings could be a sketch or a simple map of the area around the cave. It could represent the plan for a coming hunt or perhaps a narrative story of one that had already happened.”

The research team believes that the cave would have been a strategic location for the hunters who probably drew out the map. Further evidence backing up the belief that the map depicts the area around Abauntz Lamizulo is the drawing of the mountain, San Gregorio, that can be seen from the cave. 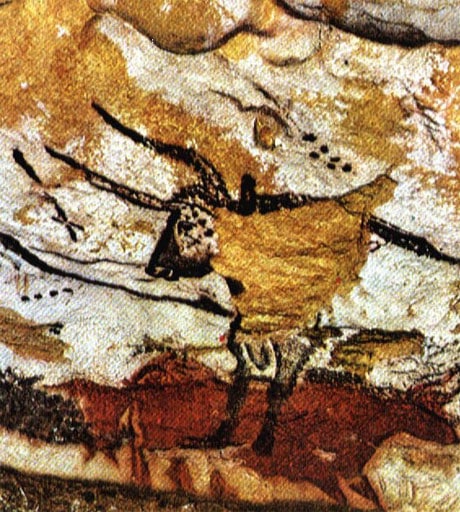 The prehistoric paintings found in Lascaux caves are some of the most beautiful and well-known pieces of art left by our ancestors. There are thousands of figures of animals, humans, and abstract signs in the paintings and many interpretations of what the paintings represent have been presented over the years.

One of the more recent theories suggests that some of the paintings may have been prehistoric star maps.

According to German researcher Dr. Michael Rappenglueck of the University of Munich, some of dots in the area of the paintings known as the Shaft of the Dead Man correspond with constellations such as Taurus, the Pleiades, and the Summer Triangle.

Another researcher, Chantal Jègues-Wolkiewiez, believes that the Great Hall depicts an extensive star map with key points on major figures corresponding to stars in the main constellations from the Paleolithic. 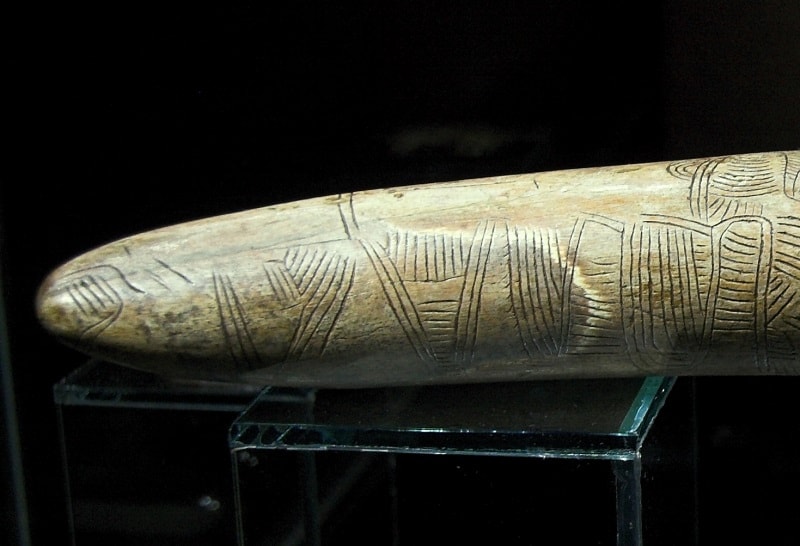 The mammoth tusk map from the village of Pavlov in the Czech Republic is believed to be the oldest known map in the world. While archaeologists aren’t completely sure, the markings on the tusk may have depicted the landscape of Pavlov at the time. Researchers also think that the mammoth tusk was used as a hunting map.

The curved markings are thought to represent the Dyje (Thaya) river. There are also symbols that show clay slopes that disappeared in the 20th century after being used to make a brick kiln. The map also shows the foothills where the river met the clay slopes and is represented by a double circle.

The original mammoth tusk map is stored in the Archaeological Institute of the Academy of Sciences of the Czech Republic in Brno.