Haplogroups are a complex genetic genealogy concept. We’re going to do the crash course version. Basically, haplogroups refer to organisms that have a common ancestor, identified by studying the nucleotide and mitochondrial mutations in cells. In other words, these mutations are so unique that they could only come from other cells with the same mutations. Therefore, the world and human history can be separated by regions and periods, approximately, using haplogroups to find people with similar types.

Here’s the shortest version: the small genetic material identified in haplotypes can be used to sort people’s ancestry. These 8 haplogroups are the oldest in the world! Therefore, they indicate the genetic lines of people and the regions they come from that are the oldest we’ve been able to identify.

Haplogroup K has been estimated to be as old as 22,000 years, though research is narrowing down to 16,000 in the Anatolia/Egypt region. It’s most concentrated in Northwest Europe and on the Southern Arabian Peninsula.

Despite being relatively young, Haplogroup K has more subgroups than any other, the largest of which being K1a. The Neolithic K belongs to this group, supported by Neolithic sites that predate European migration patterns at that time.

Haplogroup K is actually a subgroup of Haplogroup U8. In genetic genealogy, these subgroups are called “subclades.” 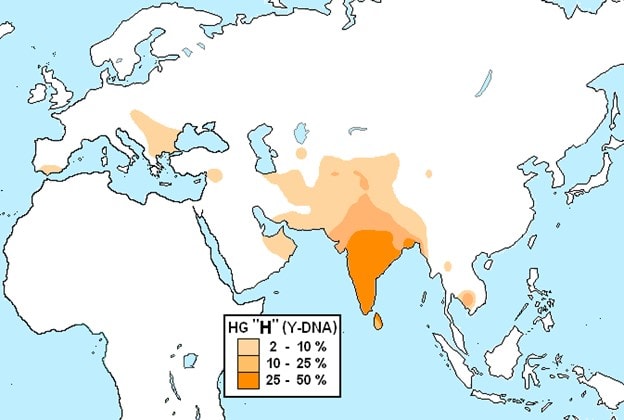 Haplogroup H is thought to have originated in Southwest Asia, evolving around the Last Glacial Maximum, which was the last time ice sheets were at their highest level, starting at around 26,500 years ago. Researchers have pointed to Iberian migrations to suggest that the Haplogroup and its other subclades reached Europe after expanding through Turkey, Egypt, and other parts of East Asia.

Today, Haplogroup H is hugely prevalent in Europe, with approximately 40% of maternal lineages belonging to this group. It originated from Dravidian populations in Southern India and Sri Lanka and spread through predominantly Romani populations throughout the Paleolithic.

The Dravidian peoples are the ancestral geographical people of the regions that now encompass South Asia and South India, including Sri Lanka. The Davidian languages have been largely debated in terms of their connection to the Indu Valley and Indu-Aryan speakers as well as the mixed origins of indigenous South Asian nomads. Iranian farmers and other “steppe pastoralists” may have contributed to the mixture of ethnicities that now encompass Haplogroup H. 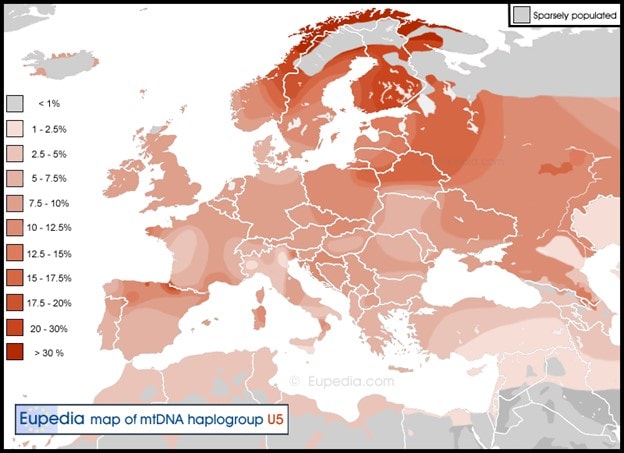 Haplogroup U emerged as Homo Sapiens left Africa, mostly towards the Middle East and India. Some of the common U subtypes like U3 and U4 can be found in Europe. Rarer ones like U9 show up in Ethiopia and Pakistan.

The South Asian Haplogroup U2 was identified in Russia in a 30,000-year-old Cro-Magnon. Researchers believe that this group after migrating North became the dominant lineage among the foragers who eventually settled in Central and South Asia, becoming the Indo-Iranian groups.

Haplogroup U dispersed widely. U4 connects with the Y Haplogroup R1a in Europe in Balto-Slavic regions, particularly during the Mesolithic. It seems U4 faded during the Neolithic period in Europe but revived when proto-Indo-European settlers came up from Russian into Europe sometime during the Bronze Age. 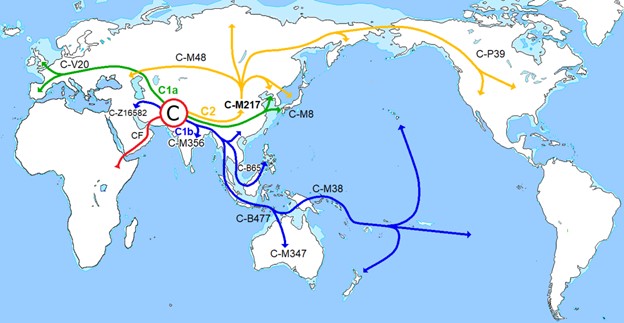 Once Homo Sapiens had migrated beyond Africa, they began to belong to new haplogroups who settled in Asia, the Indian subcontinent, and the Arabian Peninsula. These groups split into other sub-haplogroups such as CTS11043 in central Asia and C-M8 in Japan. The C tribes continued to migrate throughout Southeast Asia.

Haplogroup C is one of the rarest lineages to find in Europe. Scattered Haplogroup C variants do exist there, however, believed to be the result of Mongolian and Hunnic invasions. 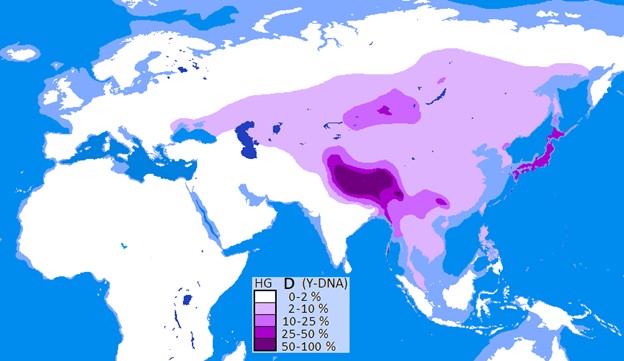 Haplogroup D is passed through fathers primarily in the regions of East Asia. However, its probable place of origin is West Africa. Haplogroup D was first discovered in Nigeria and traced back through other samples, tracing the likely movement of ancestral peoples out of Africa. This initiated Neanderthal subgroups mixing around 55,000 years ago.

This movement of Eurasia’s ancestors out of Africa supports widely held theories about an African origin for the older haplogroups, such as D and its subclades.

Haplogroup D’s carriers are largely responsible for the rapid expansion of Eastern-Eurasian populations 45,000 years ago, which is why these groups are now most common in modern East Asia. This kind of rapid expansion can often be seen in areas of explosive diversity due to haplotypes being passed quickly up the ancestral chain, such as in Tibeto-Burmese peoples in the Southeast Asia area around this time. 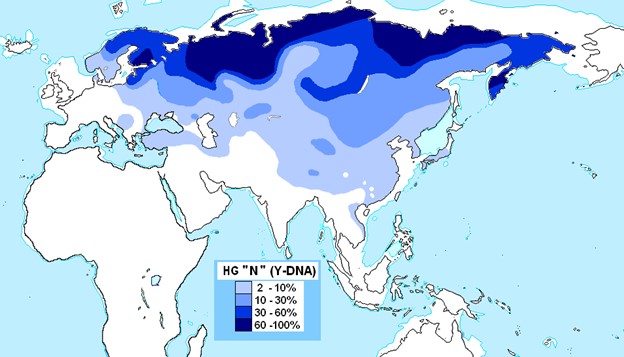 The European N haplogroup represents ancient migrations of humans out of Africa and North into Europe. Haplogroup N cannot be traced accurately due to how few base pairs are available for aging mitochondrial DNA (the N group is an mtDNA group, based on mitochondria, as opposed to being based on chromosomes like Y).

However, we’ve traced the N group between 60,000 and 80,000 years ago and learned a lot about migrations during the Ice Age. Our hunter-gatherer ancestors were moving around throughout the Neolithic, even as late as the Bronze Age, and spread this group with them. It remains one of the oldest haplogroups, particularly among people of European descent.

Haplogroup N does not have a coherent trend in terms of the ethnicities of people who passed it on. This is potentially because mitochondrial or mtDNA haplogroups like N are passed by women. And women, even back in the Neolithic era, were more likely than men to procreate with someone that did not belong to their ethnic group. 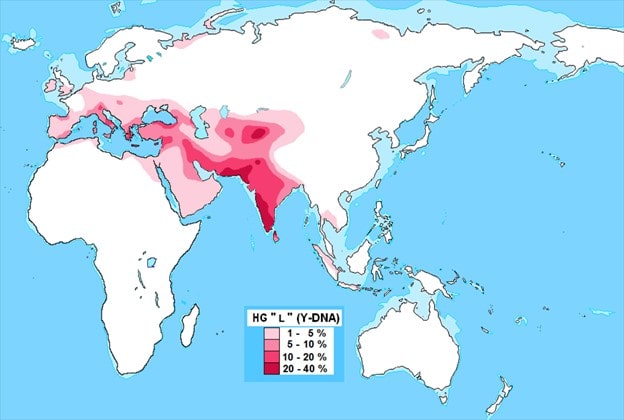 Haplogroup L is the most ancient ancestral line that can be traced directly back from modern Homo sapiens. In other words, the mitochondrial lineage or mtDNA of this haplogroup is the most recent common ancestor of all living humans.

All lines of human evolution in the present converge at some point from mother to mother to mother back maternally through the ages to the origin of haplogroup L, a woman that researches named Mitochondrial Eve. South Africa produced this lineage as well as its numerous subclades, including haplogroups L1 through L6. These have been found in Neanderthal fossils throughout Africa between 200,000 and 150,000 years ago.

Mitochondrial Eve is not the first woman, first human, or first of a new species of human. Many people could be assigned the status of Mitochondrial Eve if their mtDNA showed patterns of mutation of greater depth since the mtDNA in question is not the oldest in the world, but just the oldest whose lineage can be traced straight back through only female ancestors. 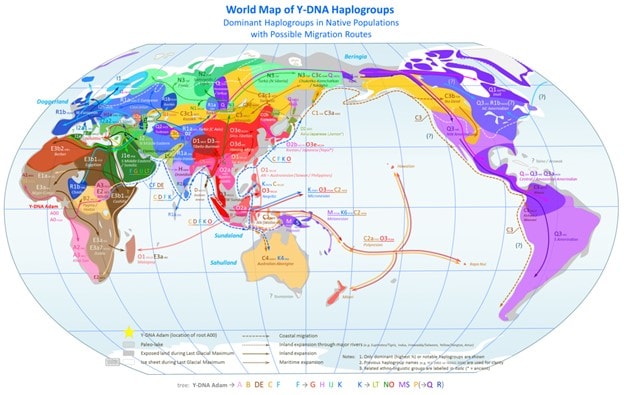 The oldest haplogroup is haplogroup A00. This Y-haplogroup indicates a genetic line of people older than what we call homo sapiens, or modern humans. Its age is still being estimated based on mutation rates, but 270,000 years is a close estimate (some researchers claim it could be nearer to 581,000!).

This early-mid Paleolithic line comes from a group of people co-existing in Africa, Europe, and Asia. They belonged to multiple human types, including Homo erectus, Homo heidelbergensis, and even Neanderthals.

Haplogroup A00 and other A groups are extremely rare outside of Africa, though some have been found in Norway and Finland. It is believed to have been brought to Europe by Levantine migrants in the Neolithic age, such as the Jews and Phoenicians among the Romans’ immigration into Europe.

The idea that modern humans come from a multiregional genetic pool is highly theoretical. Most genetic genealogists support the notion that humans come from more isolated pockets, primarily from Africa. The haplogroup A discovery supports a new model, based on the fact that modern Eurasian people contain traces of Neanderthal and Denisovan DNA. This would only be possible with a multiregional origin.

Haplogroups define changes in the land and sea, the migrations and evolutions of people, and the building blocks of who we are. The oldest ones are not always the most plentiful but they are most descriptive of ancient patterns of movement and change. In a very real way, the dispersion of haplogroups defined your family ancestry and the regional differences that make us, us. So it definitely doesn’t hurt to learn about them.

Posted by Lauren Johnson 19
Spread the loveThe continent of Europe is the smallest after Australia, and it is divided into roughly 50 independent sovereign…

Posted by Shasha Neil 0
Spread the loveThe world’s countries come in all shapes, sizes, landscapes, and ages. Each of the 194 universally recognized countries…