Humans have been eating grains for as long as anyone can remember, but the first true cereals, didn’t come about until the 19th century. Before the first cold cereal was invented, people did eat hot cereals or porridges. However, breakfast tended to be a heavy affair and the first cold cereals were created as healthier alternatives.

These early cereals were made from wheat and were tough and not that great. Eventually, cereal recipes got better and they have evolved into what we see all across grocery shelves today.

While a few of the cereals on this list are long gone, several are still actually around today and nearly as popular. 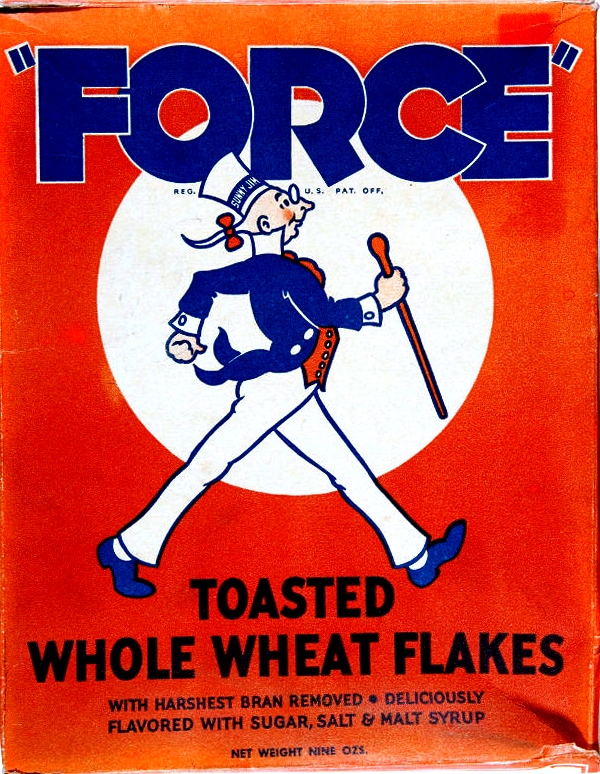 Force was originally created in 1901 by the Force Food Company, which was owned by Edward Ellsworth. It was one of the earliest cereals advertised with a popular mascot, a cartoon man named Sunny Jim. In addition to the popular character, Force was the only well-liked wheat based cereal besides Shredded Wheat.

Eventually, Force became a staple in Britain as it lost favor in the United States. Sunny Jim and his jingles were slightly modified for the British audience and they took to him immediately. Force changed ownership several times over the years. The cereal was last manufactured by Nestlé only in the UK until 2013.

To advertise Force, Minnie Maud Hanff, a freelance jingle writer, invented the character Jimmy Dumps, a morose character who on eating the cereal was transformed into Sunny Jim. 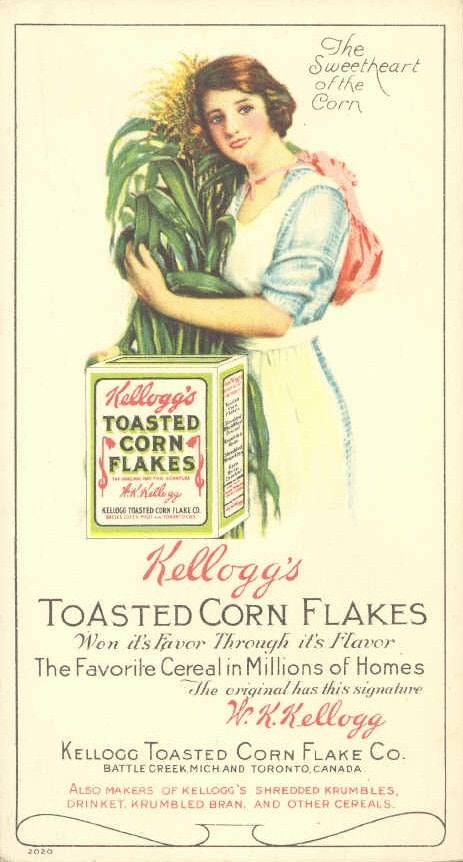 Kellogg’s Corn Flakes might not be the oldest cereal ever, but it is definitely one of the most iconic and often comes to mind when people think of breakfast. The Kellogg brothers had already been in the cereal business for over a decade, selling granola. However, they kept experimenting with different techniques and eventually produced corn flakes.

The Kelloggs’ new cereal was lighter, crispier, and tastier than the most of the tough early cereals of the 19th century. Of course, as we all know, Kellogg’s Corn Flakes were a hit and are still very popular today.

After many disagreements, William Kellogg bought the recipe for Corn Flakes from his brother and left to form “Battle Creek Toasted Corn Flake Company,” which is now the Kellogg Company. 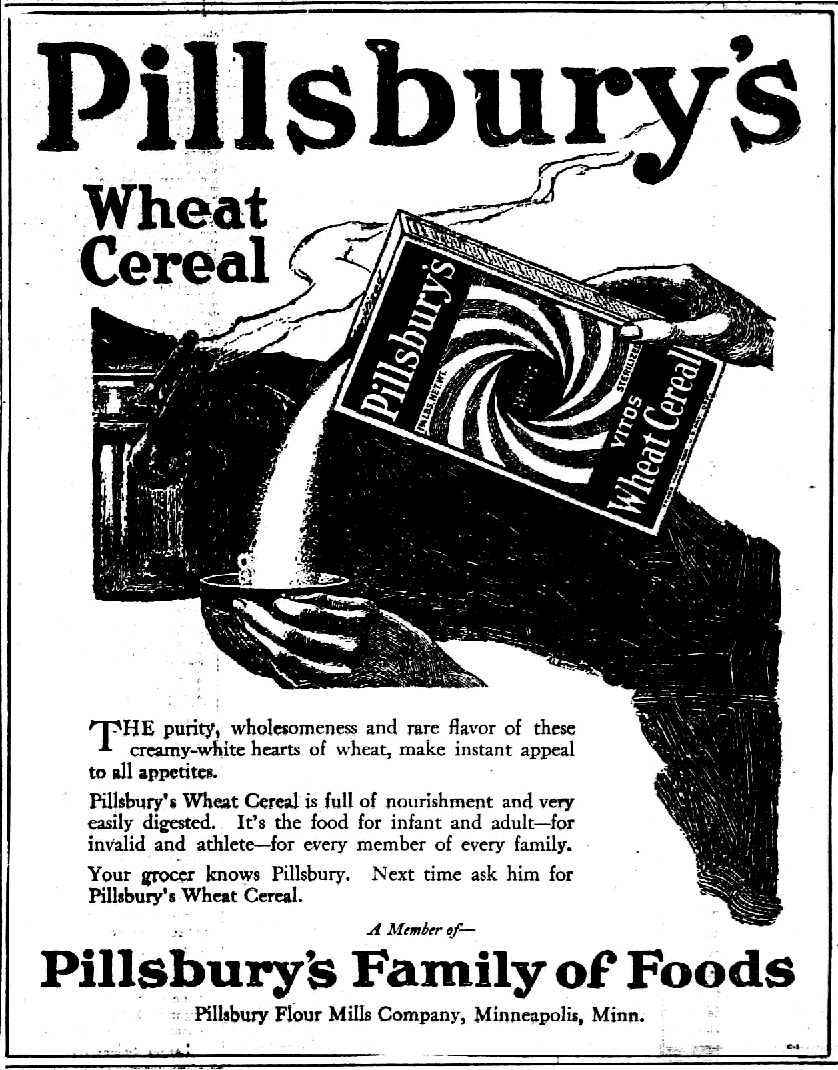 As the competition in the cereal industry was heating up, Pillsbury decided to enter the fray with their own cereal, Vitos. Like the other early cereals of the time, Vitos were made from wheat.

Pillsbury tried to make Vitos stand out from the competition by letting consumers know it could be eaten in many different ways. The company even ran an amateur recipe competition using Vitos in 1900.

According to Vitos packaging, the cereal was sterilized, which was unique to Vitos as no other cereals were advertised as sterilized. 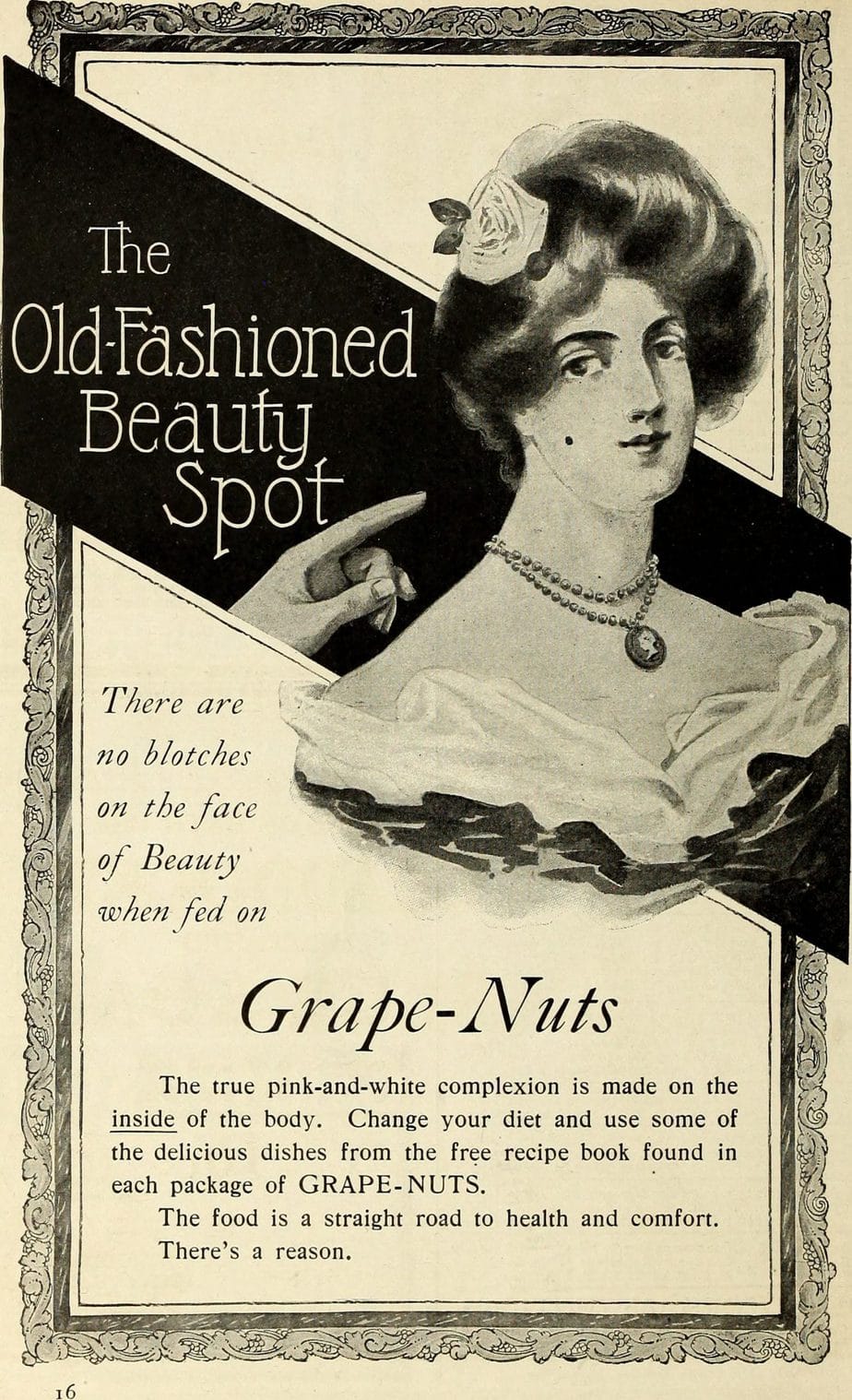 Grape-Nuts made their debut all the way back in 1897 after C. W. Post visited John Harvey Kellogg’s Battle Creek Sanitarium and became interested in all of Kellogg’s recipes. Post decided to open up his own company in Battle Creek and produced his own cereal, Grape-Nuts.

Like all early cereals, Grape-Nuts was advertised as a health food. Grape-Nuts were made from a dough that was baked into a rigid sheet. The dough was then passed through a coffee grinder to produce  “nut” sized kernels.

Grape-Nuts are such a hearty shelf-stable food that during World War II, the cereal was part of the rations sent to Allied forces stationed in Panama and other tropical parts of the world. 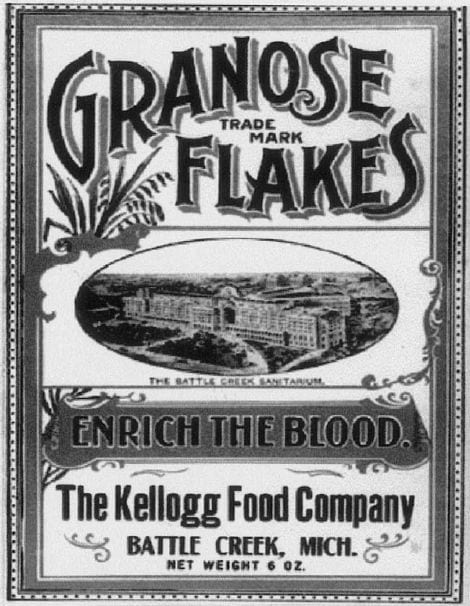 Before coming up with Corn Flakes, John Harvey Kellogg and his brother William Kellogg did a lot of experimenting. They were trying to come up with the perfect cereal and something that could compete with Shredded Wheat, which had become really popular at the time.

According to Kellogg Company lore, Granose Flakes were the result of an accident. Will Kellogg left a batch of wheat berries to soak overnight and after discovering his mistake, he decided to run them through the machine rollers anyway. This resulted in a thin sheet of dough that produced large flakes. Will Kellogg baked these flakes and thought they were delicious. The Kelloggs dubbed this new cereal Granose Flakes.

The name “Granose Flakes” is a combination of grain and the scientific suffix “ose,”or metabolism.

Shredded Wheat is another popular old-fashioned cereal that dates back to the late 19th century. The cereal was invented by Henry Perky in 1890. Perky went on to start the Cereal Machine Company and he initially sold his new shredded wheat cereal to vegetarian restaurants in 1892.

In 1893, Shredded Wheat made its national debut at Chicago’s World Columbian Exposition and the cereal soon exploded in popularity.

While a few different brands produce their own version of Shredded Wheat, the original recipe is now manufactured by Post Consumer Brands, who acquired the cereal from Nabisco in 1993 – Nabisco had been making Shredded Wheat since 1928. 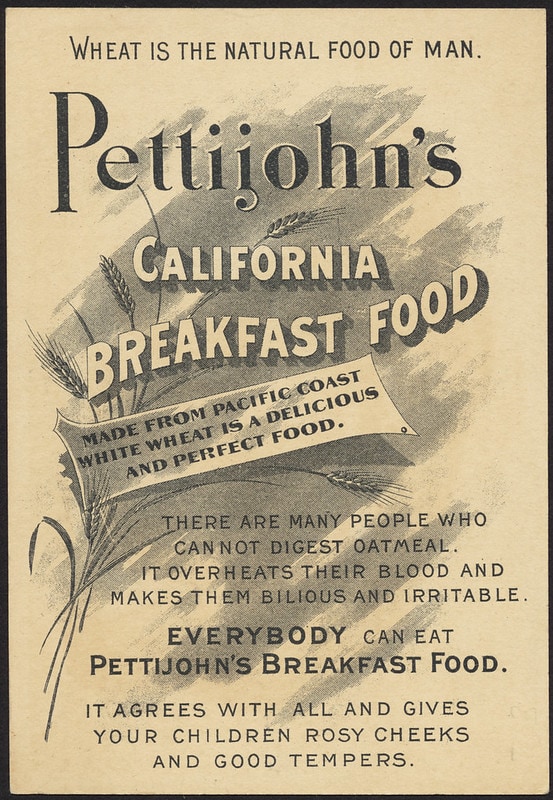 Pettijohn’s was made “from the best pacific white wheat” and was touted as a health food that had all the benefits of whole wheat without the bran. 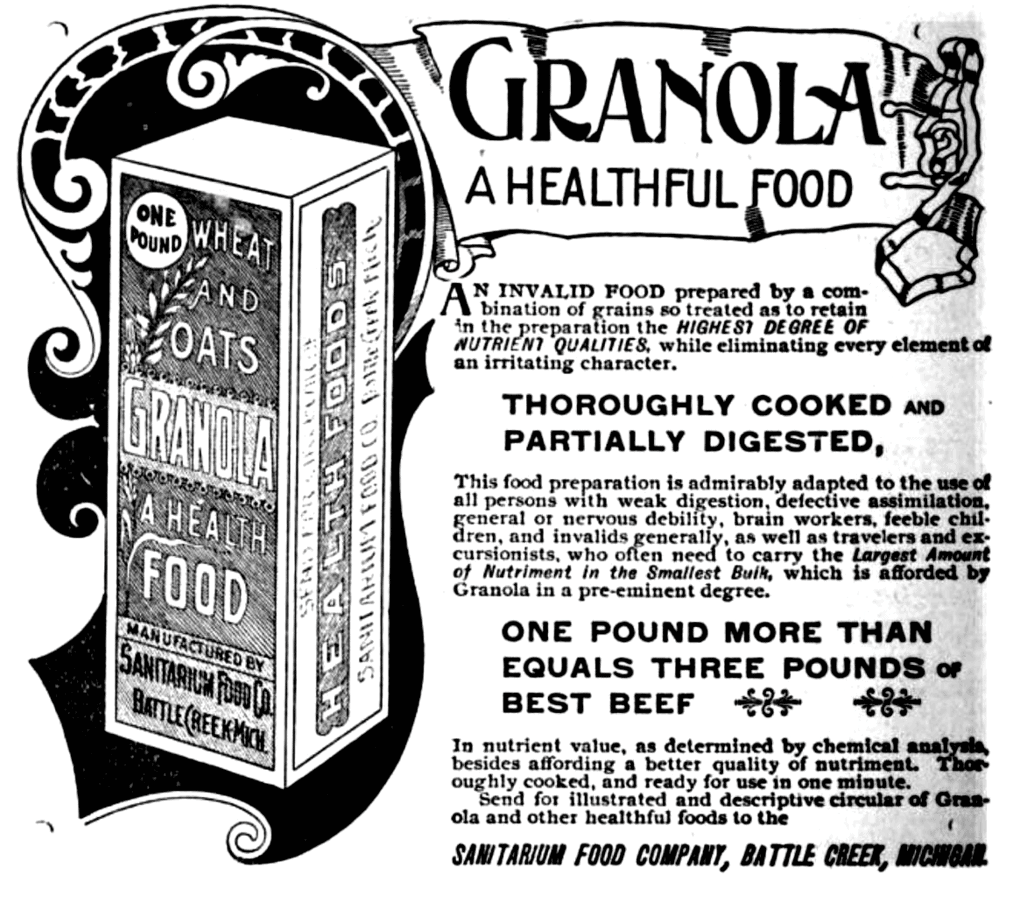 While granola is now a widely available cereal from many different brands, it actually started out as a specific brand created by John Harvey Kellogg sometime around 1881. Kellogg was inspired by James Caleb Jackson’s Granula and actually initially called his own cereal Granula.

Even though Kellogg’s Granula was very different from Jackson’s product, Jackson filed copyright infringement against Kellogg, who then changed his cereal’s name to Granola.

Kellogg’s granola was made from oats instead of the Graham flour that Jackson used. Kellogg also used a different rolling process to make the oats more chewable than Jackson’s cereal, which had to be soaked over night.

John Harvey Kellogg’s Granola was so popular that within a decade, he was selling two tons of the cereal annually. 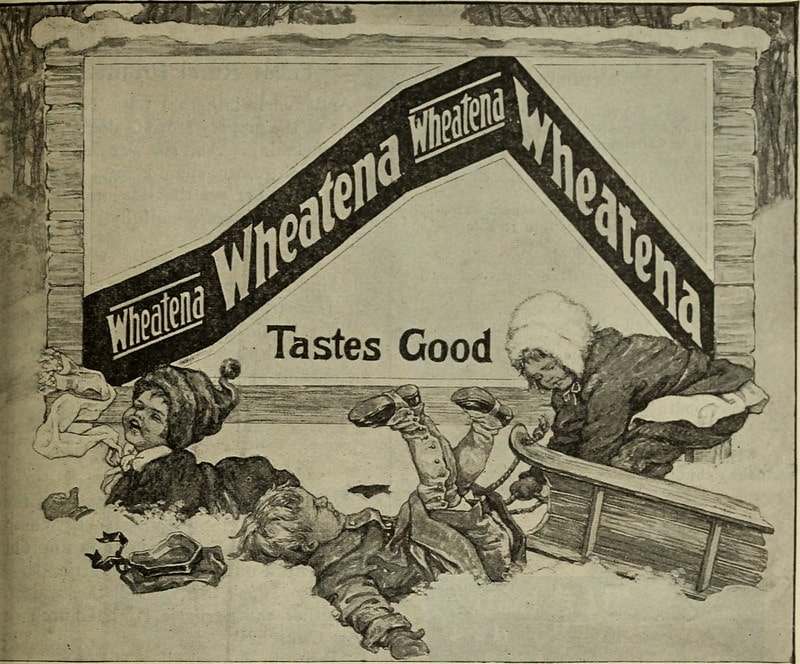 
Wheatena might not be a widely recognized cereal today, but it is one of the oldest continuously manufactured cereals dating back to the 19th century. The cereal was created by George H. Hoyt and it was one of the first cereals to be packaged in a box. At the time, most cereals were kept in large barrels at the grocery store and scooped out by the pound for customers. Hoyt felt that his sanitary packaging would appeal to customers.

Wheatena hasn’t changed much over the years and the cereal is produced by Homestat Farm, which is owned by Camden Holdings.

In the 1930s, Wheatena often sponsored radio shows, including 87 episodes of the Popeye the Sailor radio program on NBC’s Red Network. 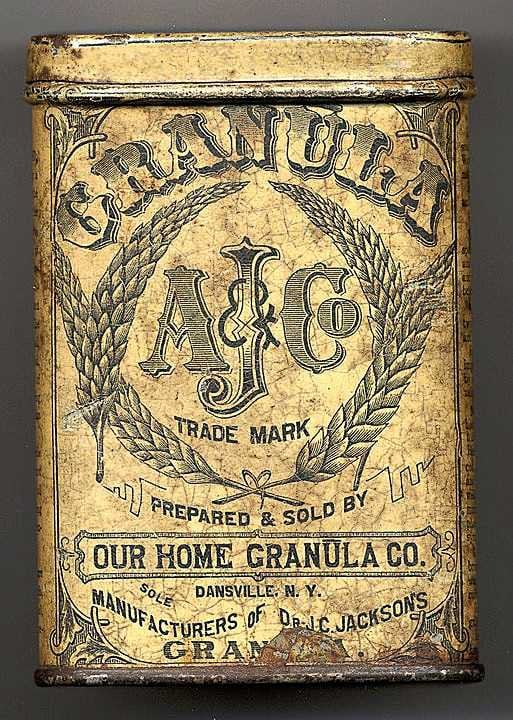 First invented in 1863, Granula is the oldest cereal ever created in the world. While cereal grains and hot cereals have been eaten by people for years, Granula was the first breakfast cereal, as we know it today.

Jackson came up with Granula, which was made from Graham flour dough that was rolled into sheets and baked. These dried sheets were then broken into pieces, baked again, and broken down again into smaller pieces. As you can imagine, Granula was very tough and it didn’t take off with the public, but Jackson’s creation ended up inspiring one of biggest cereal titans, John Harvey Kellogg.

Granula was such a hard cereal that it had to be soaked overnight before it could be eaten and it was nicknamed “wheat rocks.”