Not long after coming America, often in the pursuit of religious and political freedom, the first European colonists established the very first institutions of higher learning. Like all early universities, most of these schools were founded to help clergyman (often of Puritan or Presbyterian faith) further their education. Several of the schools on this list are part of what is known as the nine colonial colleges as they received their charters prior to the American Revolution. However, this list includes schools that were established before 1776, but are not considered colonial colleges because they did not receive their charters until after the United States was officially formed. 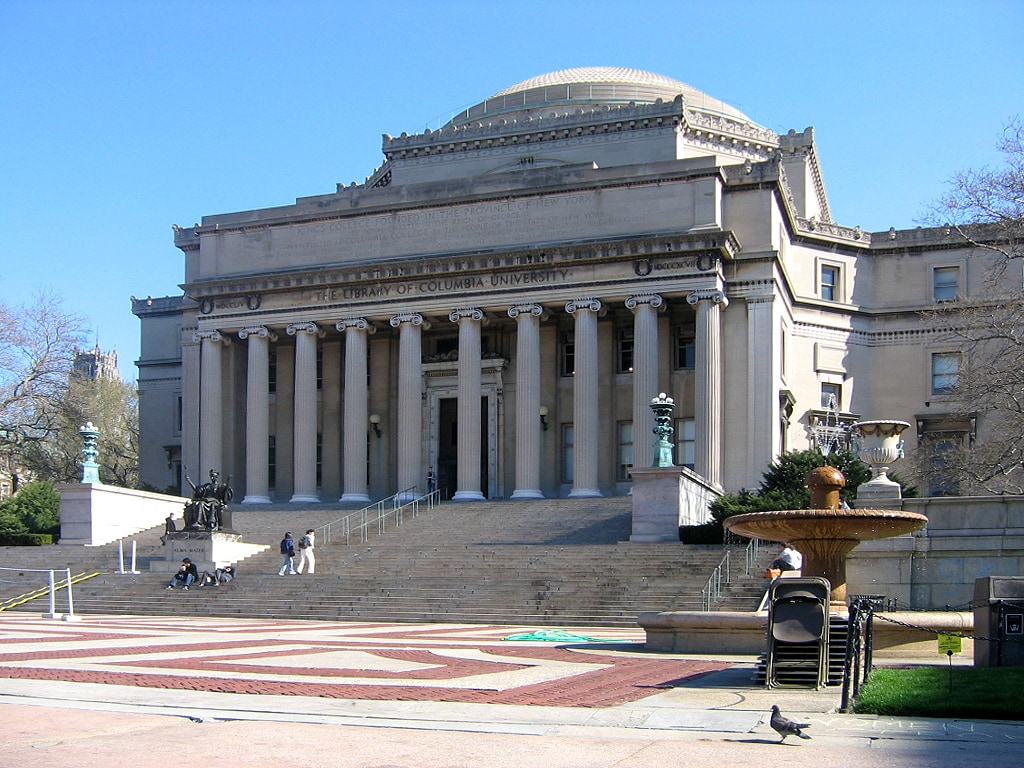 Columbia University dates back to 1754 when it was founded as King’s College by a royal charter from King George II of England. While Columbia University is the last entry on this list, the school claims that it is the fifth oldest university in the United States; Columbia is the oldest institute of higher learning in the state of New York.

From the beginning, Columbia University has been a distinguished school, drawing high caliber students and nurturing their pursuit of knowledge. For example, in 1767 Columbia established the first American medical school that granted an M.D. degree. Although the school was growing and drawing in some of the colonies’ greatest minds, Columbia suspended instruction when the American Revolutionary War broke out in 1776. British loyalists were kicked out of the school and the American rebels seized the school and renamed it Columbia College. In 1784, the school was restored and Columbia University’s current charter dates to that year.

Washington and Lee University was founded in 1749 as Augusta Academy. The school was established by Scots-Irish Presbyterian pioneers about 20 miles north of where the university is presently located. A few decades later, inspired by the formation of the United States and American patriotism, the school changed its name to Liberty Hall.

Over the next decade, the school struggled, but in 1796 George Washington saved the school by giving it its first major endowment of $20,000 of James River Canal stock. After this the school changed its name to Washington College. The second half of the school’s name is in honor of General Robert E. Lee, who served as president of Washington College from 1865 until his death in 1870. Lee was initially reluctant to accept the position as the school’s President because he did not want the school to receive negative backlash for Lee’s Confederacy involvement during the Civil War. However, Lee believed in restoring national unity and recruited students from the reunited country.

One of the most unique features of Washington and Lee University is student-run Honor System, which was first established by Robert E. Lee while he was the school’s President. Under the Honor System, students promise not to lie, cheat, or steal, and anyone who violates these rules is asked to leave the school. 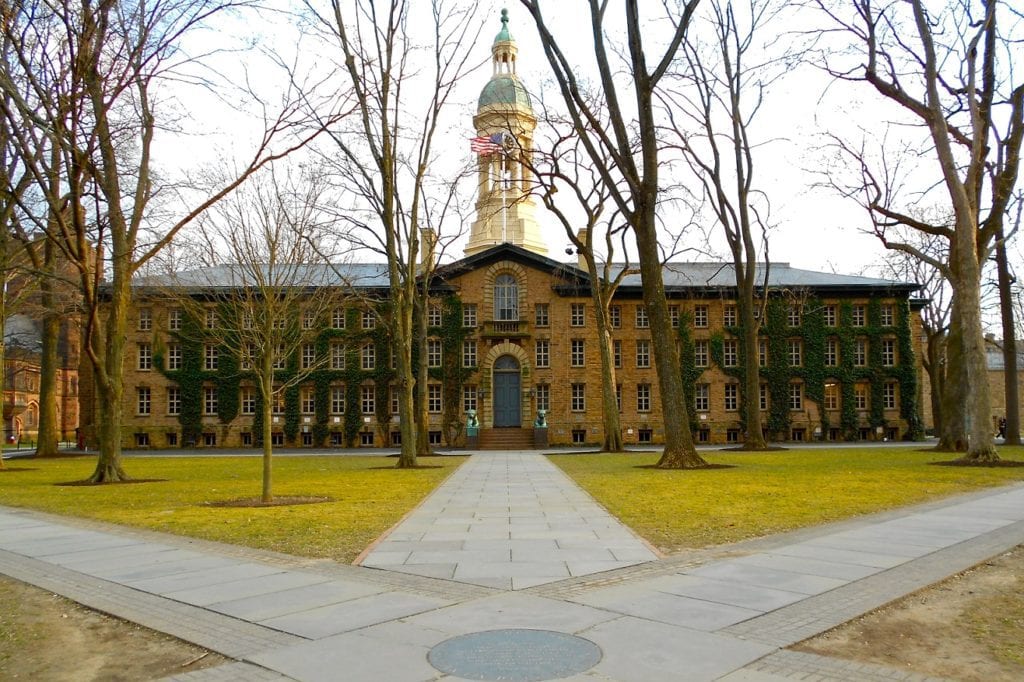 Princeton University was founded in 1746 as the College of New Jersey by the New Light Presbyterians in order to train ministers. Although there are several colleges that were founded before Princeton, the school is often cited as being America’s fourth oldest institution of higher learning. The school was initially located in Elizabeth, New Jersey and then moved to Newark a year later. It was finally relocated to Princeton in 1756.

For nearly 50 years, the entire college was located in one building, Nassau Hall, which was named after King William III, Prince of Orange of the House of Nassau. As one of the largest buildings in the American colonies, Nassau Hall was used to quarter soldiers from both sides during the American Revolution.  As part of its 150th anniversary celebration, the college changed its name to Princeton University in honor of the town it resided in. Over the years, Princeton has become one of the most highly regarded schools in the world and has produced many notable alumni including, two U.S. presidents, 12 U.S. Supreme Court Justices, and many prominent members of the U.S. Congress and the U.S. Cabinet.

In 1783, the Continental Congress met in Princeston’s Nassau Hall, making it the capital building of the United States for a short period of time.

The University of Delaware was started in 1743 the Presbytery of Lewes expressed the need for an educated clergy. This led to Presbyterian minister Reverend Dr. Francis Alison to open a school in New London, Pennsylvania. The school relocated to Newark, Delaware and was chartered by the colonial government in 1769 as the Academy of Newark. At the time Delaware was a part of the Pennsylvania Colony (until 1776), and the school was denied a charter as a college to prevent competition with the University of Pennsylvania. The school was finally designated as a degree-granting institution in 1834 and changed its name to Newark College.

In 1843 the school had its name changed once again, this time to Delaware College and it officially became the University of Delaware in 1921. The university became a coeducational institution in 1945 after merging with the nearby Women’s College of Delaware. Although the school is a privately governed university, it receives public funding for being a land-grant, sea-grant, space-grant, and urban-grant state-supported research institution.

In 1923, the University of Delaware became the first American university to offer a study abroad program. 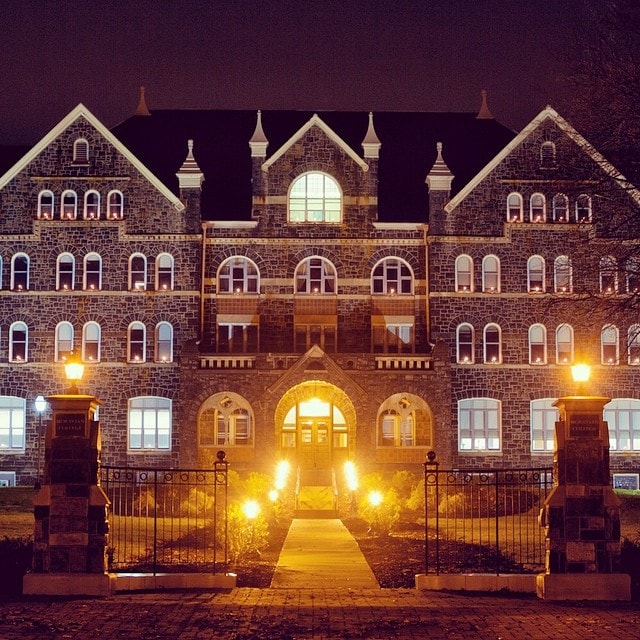 Moravian College traces its roots back to Bethlehem Female Seminary, which was founded in 1742 by 16 year old Countess Benigna von Zinzendorf, the daughter of Count Nikolaus Ludwig Zinzendorf, who was the benefactor of the fledgling Moravian communities in Nazareth and Bethlehem, Pennsylvania. The seminary was the first girls’ boarding school in the U.S. Around the same time that the Bethlehem girls’ school was established, a boys’ school was opened in the same town and another opened a year later in nearby Nazareth. These boys’ schools merged in 1759 to form Nazareth Hall and in 1807, a men’s college called the Moravian College and Theological Seminary was established.

In 1863, both the men’s school and the Bethlehem Female Seminary were chartered to grant baccalaureate degrees. Some time in 1913, Bethlehem Female Seminary changed its name to the Moravian Seminary and College for Women and in 1954, the schools finally merged to form Moravian College – the Moravian Theological Seminary maintained a closely related but academically distinct identity as a graduate school of theology. Today, Moravian College is a small private liberal arts college that has been named one of the best in the nation by the Princeton Review.

Not only was Moravian College the first to educate women in the U.S., it was also the first university to hold classes for Native Americans in their own language. 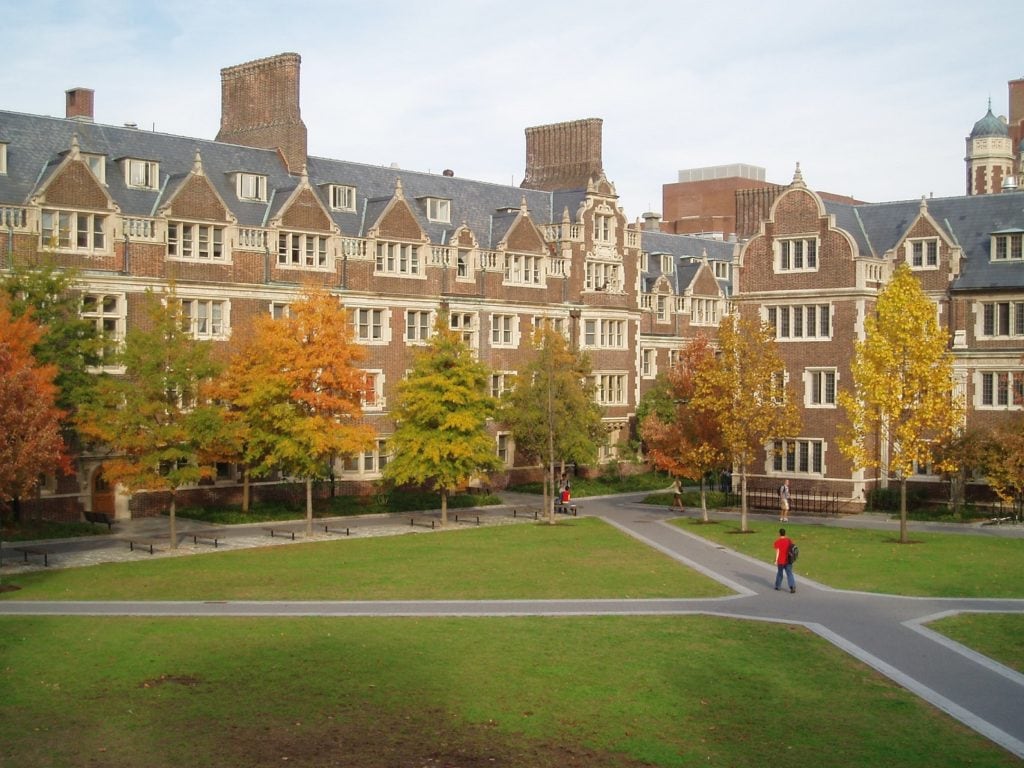 
Although the University of Pennsylvania officially cites its founding as 1740, Benjamin Franklin and his assembled Board of Trustees did not meet to discuss establishing a school until 1749 and the first classes were not taught until 1751. The university chose 1740 as its founding date because the original building of the school was first built that year by a group of Philadelphians who wanted to erect a preaching hall for the traveling evangelist George Whitefield, which would also be used as a charity school.

However, the funding for the school fell through and the building was vacant for over a decade. In 1749, Benjamin Franklin released a pamphlet called “Proposals Relating to the Education of Youth in Pennsylvania”, which detailed his desire to educate future generations. Later that year, he gathered the leading citizens of Pennsylvania to form a Board of Trustees, who decided to open the new school in the old building built in 1740. The “Academy of Philadelphia” opened in 1751 and the “College of Philadelphia” was chartered in 1755.

Yale University was founded as the Collegiate School in 1701 in Saybrook a town in the Connecticut Colony as a place “wherein Youth may be instructed in the Arts and Sciences (and) through the blessing of Almighty God may be fitted for Publick employment both in Church and Civil State.” In 1716, the college’s trustees voted to move the school to New Haven, Connecticut.

The school changed its name to Yale College in 1718 to honor Welsh merchant Elihu Yale, who had donated the proceeds from the sale of nine bales of goods together with 417 books and a portrait of King George I. Yale is also home to the third largest academic library in the U.S., which holds more than 15 million volumes.

The very first scholarships for higher education in America came from the Reverend George Berkeley, who established the Berkeley Scholarships for students to pursue their graduate studies at Yale University. 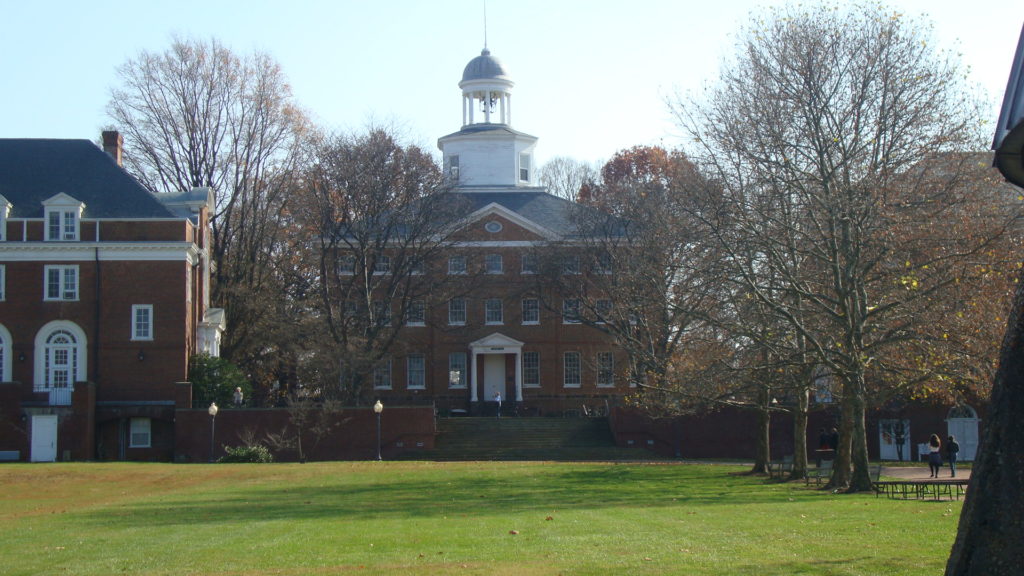 The school received its current collegiate charter in 1784 when the state of Maryland merged St. John’s College with King William’s School. Like most of the oldest universities in the U.S., St. John’s college is associated with the early days of the country. Four of the schools founders signed the Declaration of Independence. Some sources claim that St. John’s College may have also been associated with the Freemasons and that the school was named after Saint John the Evangelist. Despite its name, the school does not have any religious affiliation.

The main building of St. John’s College is McDowell Hall, which was converted from the governor’s mansion in 1789 – McDowell Hall is the third oldest academic building in continuous use in the U.S.

2. The College of William & Mary 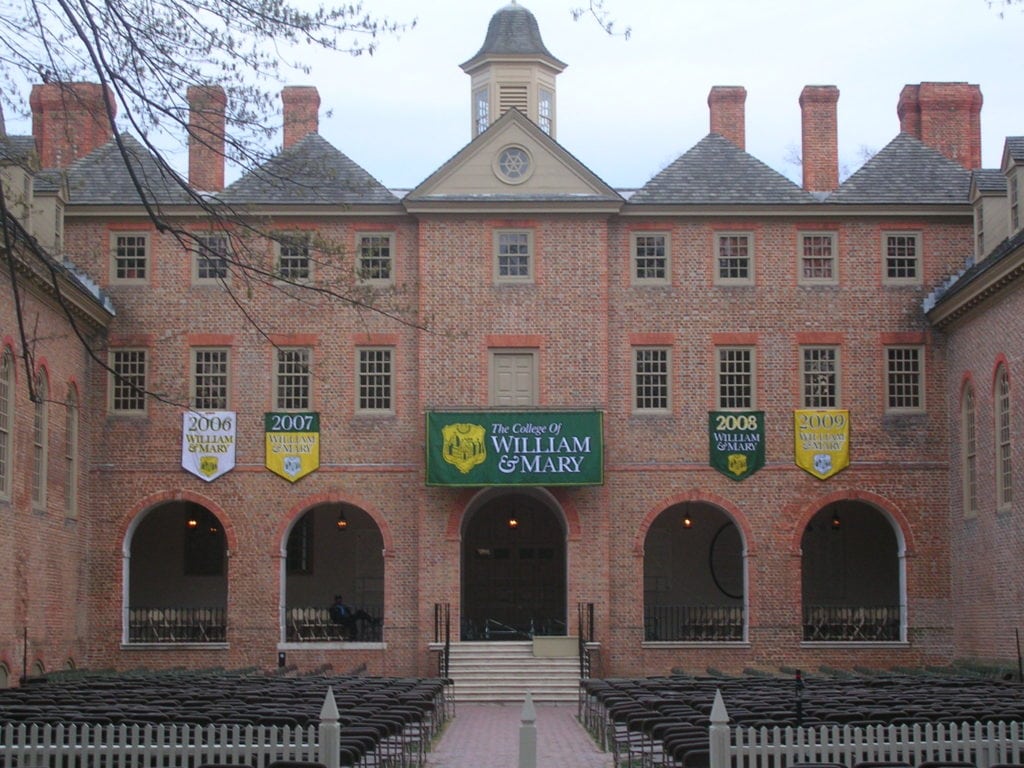 The College of William & Mary is the second oldest university in the U.S. and the oldest institution of higher education in the American South. According to the school’s history the plans for the college date back to 1618 (long before Harvard), but these plans were derailed due to an “Indian uprising.” The college is named for King William III and Queen Mary II of England, who signed the charter on February 8, 1693, for a “perpetual College of Divinity, Philosophy, Languages, and other good Arts and Sciences” to be founded in the Virginia Colony.

Several of America’s founding fathers attended William & Mary, including George Washington, who received his surveyor’s license from the school and later became its first American chancellor; Thomas Jefferson, John Tyler, and James Monroe all received their undergraduate educations at the university.

The original building of the College of William & Mary, the Sir Christopher Wren Building (originally called the College Building), is the oldest college building still standing in the U.S. 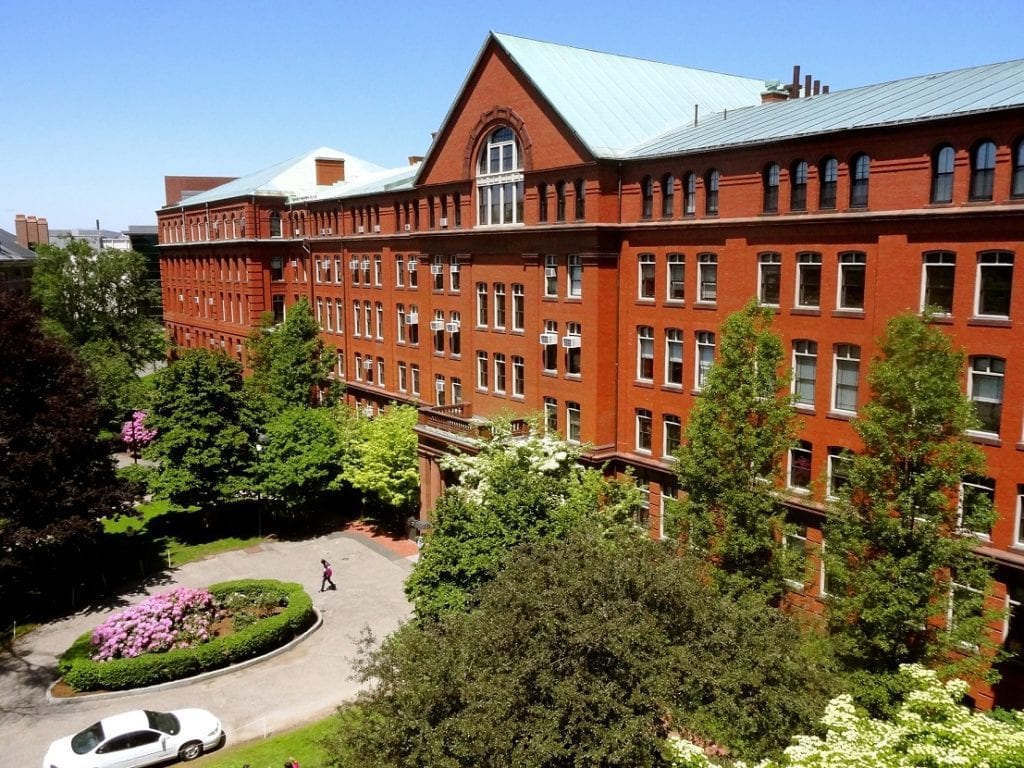 Harvard University claims to be the oldest university in the United States as it was established in 1636 by vote of the Great and General Court of the Massachusetts Bay Colony. The school was founded because the colonists anticipated the need for training clergy in the new commonwealth and was called “New College.”

Harvard received its charter in 1650 and established itself as the Harvard Corporation. Although Harvard is known for many things, it was home to the very first printing press in the New World, which it received in 1638. As the only printing equipment in the colonies at the times, it was used to print English America’s first book, its first periodical literature, and its first best-sellers. Not only did the printing press help birth American literature, but it also helped to legitimize the school. Today, Harvard is one of the most prestigious universities in America and around the world.

Harvard changed its name in 1639 after a clergyman named John Harvard gave the new school £779 pounds sterling (over $1,000) and his library of around 400 books.