No one knows for sure when early humans decided to start intentionally burying the dead. The earliest undisputed burials date back to around 100,000 years ago and cemeteries — intentional mass gravesites — would not emerge for thousands of years. Early hunter-gatherers often buried their dead right next to their houses.

So far, the earliest true cemetery ever found is from 8,500 years ago and other ancient cemeteries have yet to be discovered. 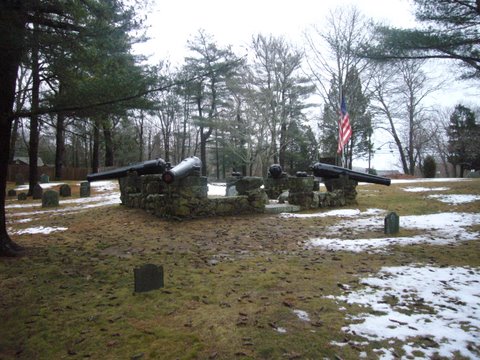 According to the American Cemetery Association, the Myles Standish Burial Ground is the oldest maintained cemetery in the United States. The cemetery is located in Duxbury, Massachusetts and was in use from 1638 – 1789. It only contains about 130 marked graves, which belonged to several well-known Pilgrims who traveled on the Mayflower, including Captain Myles Standish, the cemetery’s namesake.

A majority of the early graves were only marked with fieldstones or wooden markers, which have deteriorated or vanished. The oldest existing carved gravestone belongs to Captain Jonathan Alden who died in 1697.

The cemetery was abandoned in 1789 and reclaimed in 1887 by the Duxbury Rural Society. They set out to find Myles Standish’s grave, which was unmarked and eventually found it and built a memorial over his gravesite. It was added to the National Register of Historic Places in 2015. 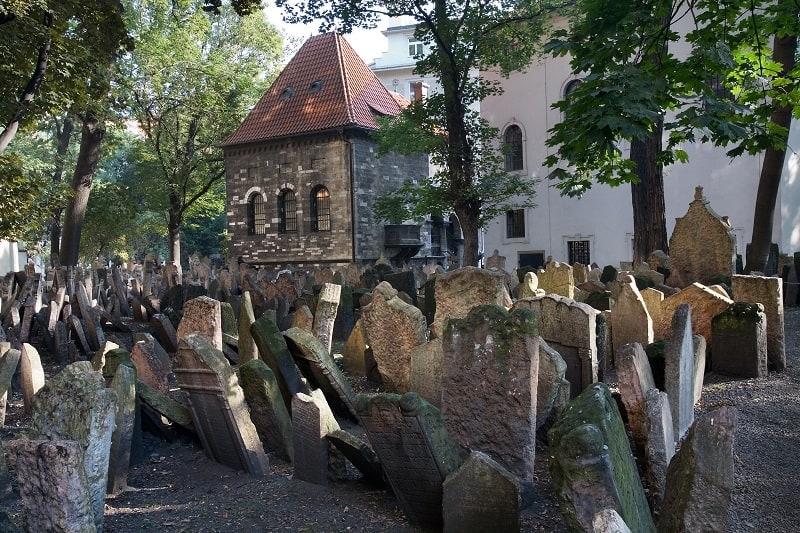 The Old Jewish Cemetery in Prague is the oldest surviving Jewish cemetery in the city one of the oldest in all of Europe. The cemetery dates back to about 1439 (the earliest tombstone belongs to Rabbi Avignor Kara), but may have been in use much earlier.

Between 1439 – 1787, it was the only burial place for Prague’s Jewish community, as they were not allowed to buried outside their designated ghetto.

There are over 12,000 tombstones in the cemetery, but it is believed that there are about 100,000 individuals buried beneath them. Some graves may contain as many as 12 bodies stacked on one another.

Although the earliest tombstone are simple and plain, starting around the 16th and 17th century, more elaborate tombstones were built. These ornate tombstones feature symbols representing a person’s family name and/or profession. 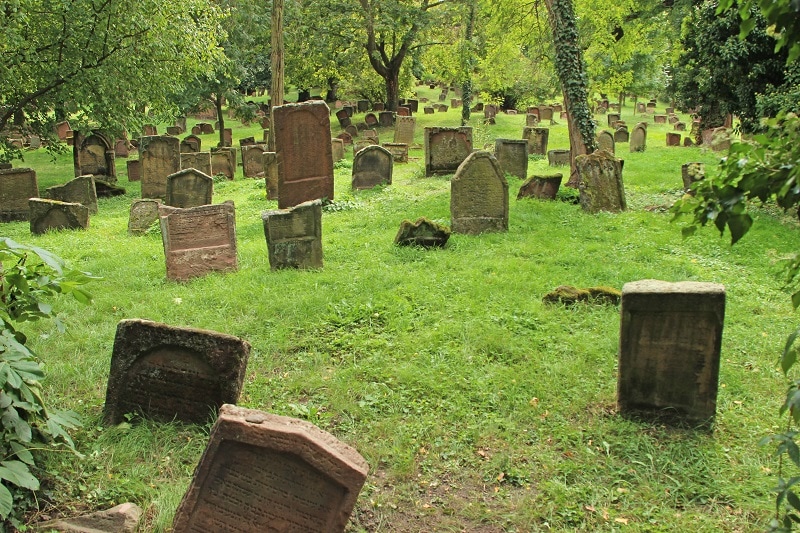 The Jewish Cemetery in Worms, Germany, which is also called Heiliger Sand (Holy Sand), is the oldest existing Jewish cemetery in Europe. The Jewish community in Worms was established sometime in the 11th century and the oldest grave in the cemetery dates back to around 1058/59. In medieval times, the Jewish community in Worms thrived and many notable Jewish leaders lived in the area and are buried in the cemetery.

Some of the most important graves belong to rabbis such as Rabbi Meir of Rothenburg, Alexander ben Salomon Wimpfen, Rabbi Nathan ben Issak, and Rabbi Jakob ben Moses halevi, called MaHaRil. The last burial at the cemetery took place in 1940, in the middle of the Holocaust.

Somehow, the cemetery survived World War II and is maintained by the the Jewish Congregation of Mainz. Today, Heiliger Sand is a pilgrimage destination for Jewish visitors from around the world. 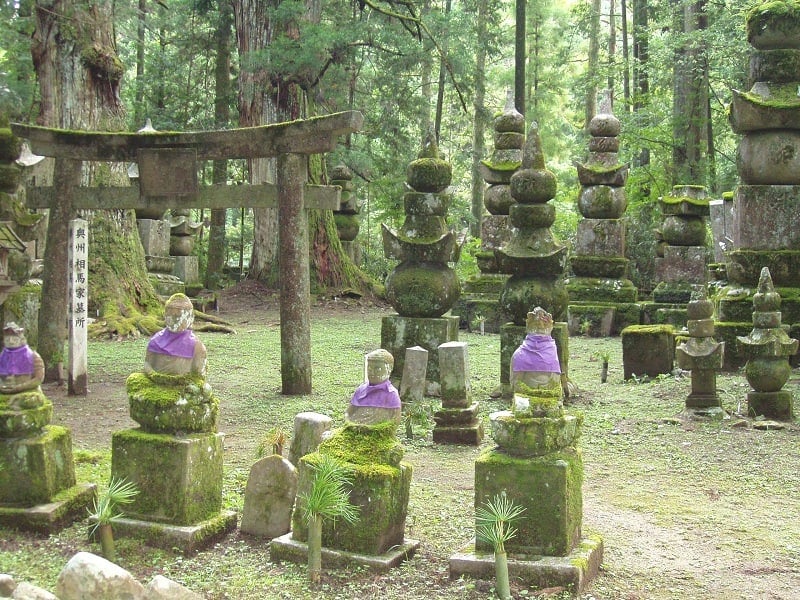 Okunoin Cemetery is the oldest, largest, and most sacred cemetery in Japan. The cemetery is located in Mount  Kōya, which was first settled in 819 by Kūkai, the founder of Shingon Buddhism. When Kūkai died in 835 he was interred in his mausoleum.

According to Shingon Buddhism beliefs, Kobo Daishi ( Kūkai’s posthumous name) is not really dead, but is in a state of eternal mediation awaiting the appearance of Maitreya (called Miroku by the Japanese), the future Buddha.

Since Kobo Daishi’s burial, Okunoin has become a popular pilgrimage site and many many people, including prominent monks and feudal lords, have been buried here to be close to Kobo Daishi and also await Miroku.

The main area of worship in the cemetery is called Torodo Hall, which contains 10,000 lanterns. The lanterns were donated by worshippers and kept eternally lit. Reportedly, two of the lanterns have been burning since 1088 CE. 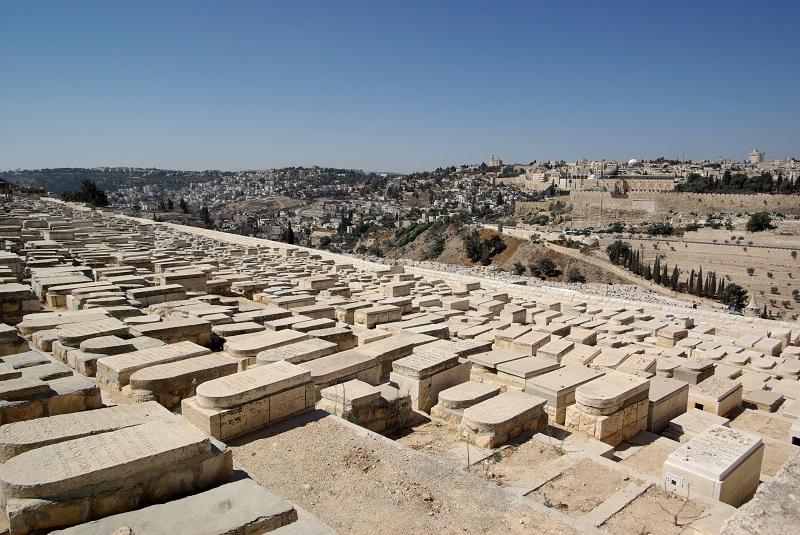 The Jewish Cemetery on the Mount of Olives is one of the oldest and most important Jewish cemeteries in the world. The Mount of Olives has religious significance and is tied to biblical events. Due to this, the area served as the center of Jewish life in Jerusalem. The mountain was sanctified and it became a place of Jewish pilgrimage.

During the First and Second Temple periods, the Jewish people in the area began burying their dead in burial caves on the slopes of the mountain. Since then, the cemetery has been used to bury all of the city’s Jewish population, including notable Jewish figures from around the world. One of the most important archaeological  sites of the cemetery is the Silwan necropolis. The tombs were used by the highest ranking officials in ancient Jerusalem and date back to the 9th – 7th centuries BCE. 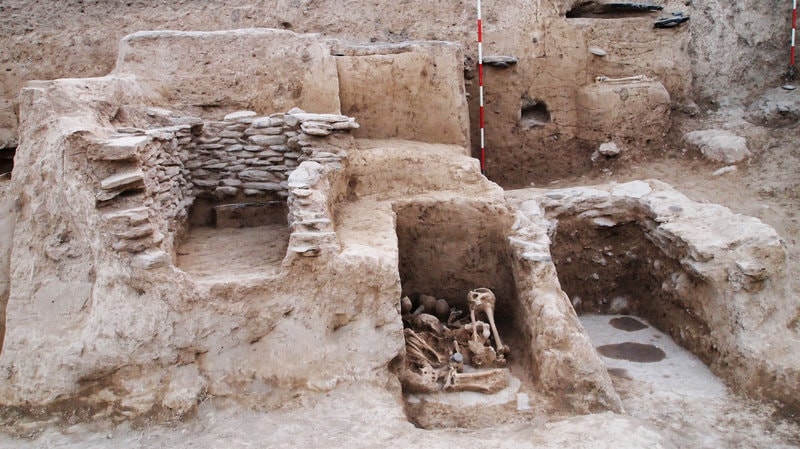 Around 2012, a team of Italian archaeologists led by Luca Maria Oliveri announced that they had uncovered an ancient cemetery in the village of Udegram, located in Pakistan’s Swat Valley. Although the remains had not been carbon-tested at the time, the archaeologists believed the bodies belonged to members of the Dardic community. They also said that the cemetery was used between the end of the second millennium BCE and the first half of the first millennium BCE.

Udegram has been excavated since the 1950s, but this was the first time that archaeologists noticed the graves. They discovered 32 sealed graves, which contain a wealth of artifacts. Some of the graves contained hairpins, spindles, copper and bronze ornaments, beautifully preserved pots, and pieces of iron. 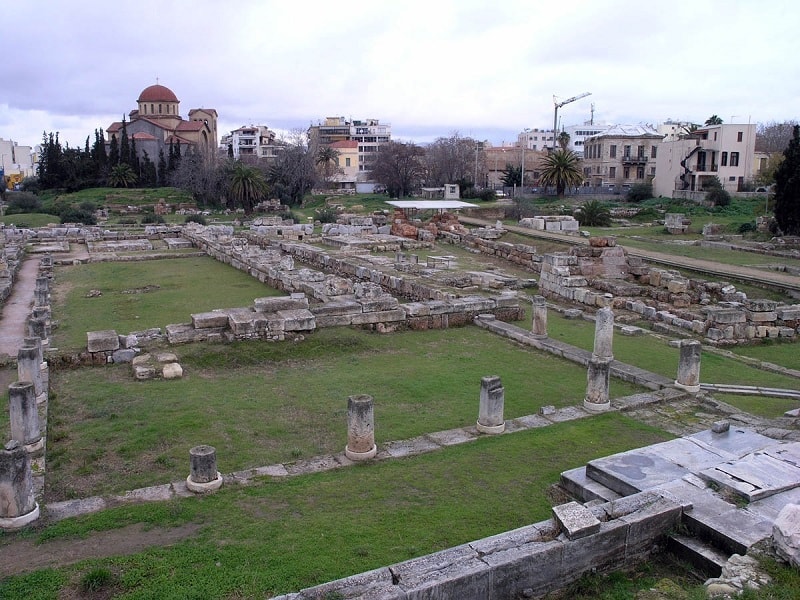 For several centuries, Kerameikos was the most important cemetery in ancient Athens. The graveyard is located north of the Acropolis and was originally an area of marshland on the the banks of the Eridanos river. Ancient Greeks had been using the site to bury their dead since at least 3000 BCE and an organized cemetery was established around 1200 BCE.

Kerameikos is divided into two major sections, the older area is located within the ancient city walls and the other is one the outside. The two sections are divided by the Wall of Themistocles, which is also a historical monument. In addition to the graves, the cemetery houses other structures such as private homes, pottery workshops, and the pompeion — which was a large building complex most likely used to prepare for various religious festivals. 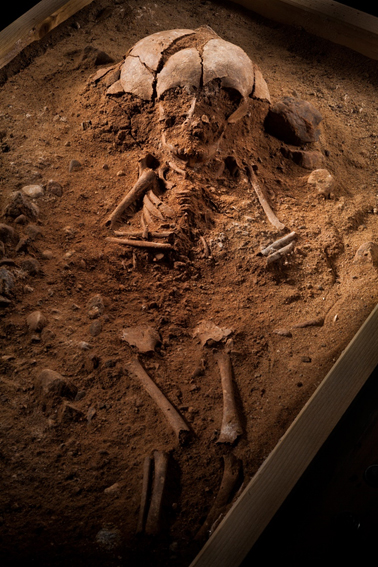 The ancient European cemetery known as Gross Fredenwalde is currently believed to be the oldest cemetery in the world. According to researchers, it is the earliest known instance of a “true cemetery”, in which people purposely and carefully buried the dead together.

The grave site dates back to the Mesolithic era and finding multiple graves at one site from this time period is rare. People did not start burying the dead together until about 3,000 years later.

As of 2016, archaeologists have excavated nine skeletons and there is evidence that there are many more at the site. Five of the remains belong to children under six years old with one of them belonging to an infant. It is the oldest infant skeleton ever found in Germany and one of the earliest in Europe. The graves and their contents provide significant insight into this time period in early human history.