Archaeology has roots dating back to the early civilizations that were curious about the past. The Greek historian Herodotus (c.5th century BCE) was the first to systematically study the past and may have been the first person to examine artifacts. Since then, archaeologists have uncovered thousands of artifacts from different periods of human history.

The entries on this list are some of the oldest artifacts ever found in their category (instruments, tools, sculptures, etc.).

Some of the oldest artifacts on this list predate Homo sapiens and were most likely created by early human ancestors such as Homo erectus. 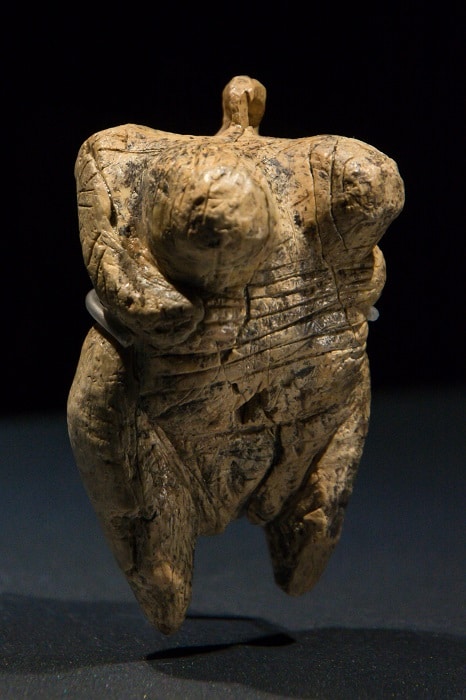 The Venus of Hohle Fels figurine is the oldest sculpture depicting the human figure. It is the oldest “Venus figurine” — any Upper Paleolithic sculpture of a woman — and dates back to about 35,000 – 40,000 years ago. It was discovered in 2008 in the Hohle Fels cave by an archaeological team led by Nicholas J. Conard.

The team discovered several other ancient artifacts, including the world’s oldest instrument (further down on this list).

Since the figure’s discovery, there have been numerous debates over nature of the figure, with Conard suggesting that it is about “sex, [and] reproduction.” He added that the exaggerated female features of the figurine are “an extremely powerful depiction of the essence of being female.”

7. Löwenmensch Figurine (Lion-man of the Hohlenstein-Stade) 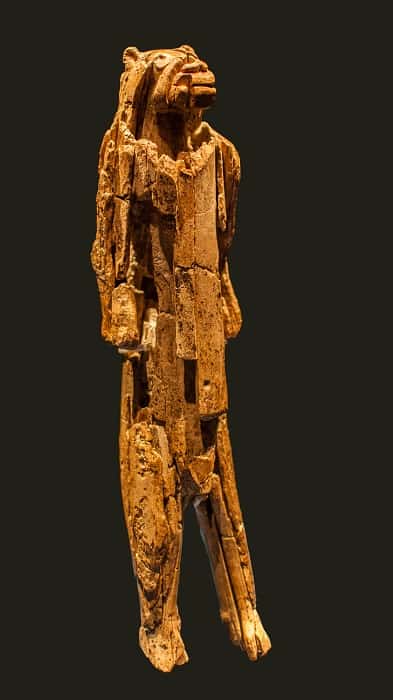 The Löwenmensch figurine is the oldest known piece of figurative art in the world. It is an ivory sculpture of a lion headed human that is between 35,000 – 40,000 years old.

The sculpture was first discovered in 1939 by geologist Otto Völzing at the Hohlenstein-Stadel cave, but the start of World War II lead to cave’s research being shelved.

The fragments of the sculpture were forgotten for over 30 years in the Museum of Ulm, until archaeologist Joachim Hahn began piecing them together. More pieces of the figure were uncovered in 1962 and they were added Hahn’s reconstruction in 1982. In 2009, further excavations were conducted and more minute fragments were discovered.

Today, the figurine is almost completely restored and is displayed at the Ulm Museum.

According to scientists, the bone flutes found at Geissenkloesterle Cave in Germany are the oldest musical instruments ever found in the world. Researchers used carbon dating to determine that the flutes were between 42,000 – 43,000 years old.

The flutes were made from bird bone and mammoth ivory and are from the Aurignacian archaeological culture, which is associated with the earliest modern humans in Europe. The instruments may have been used for recreation or religious rituals.

These flutes are older than the previous record holder, found at the famous Hohle Fels cave in Germany, that was dated to 35,000 years ago. 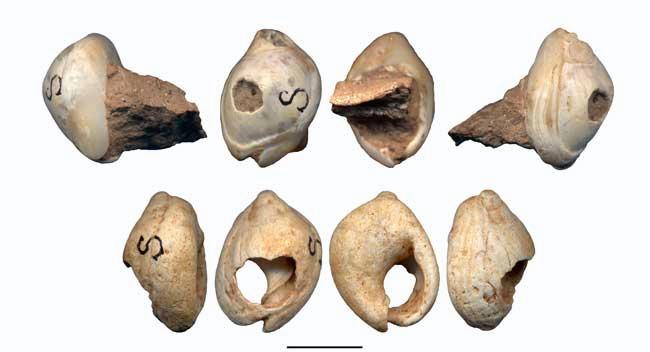 The shell beads from Skhul Cave in Israel are thought to be the oldest pieces of jewelry created by humans. The two beads from Skhul are date back to at least 100,000 years ago and a third bead from Oued Djebbana in Algeria is between 35,000 – 90,000 years old.

According to archaeologists studying the shells, the snails that produced the shells are from the sea, which is 3.5 kilometers away from Skhul. This means that the beads hold cultural significance because the people who made them had to travel a long distance to collect them. 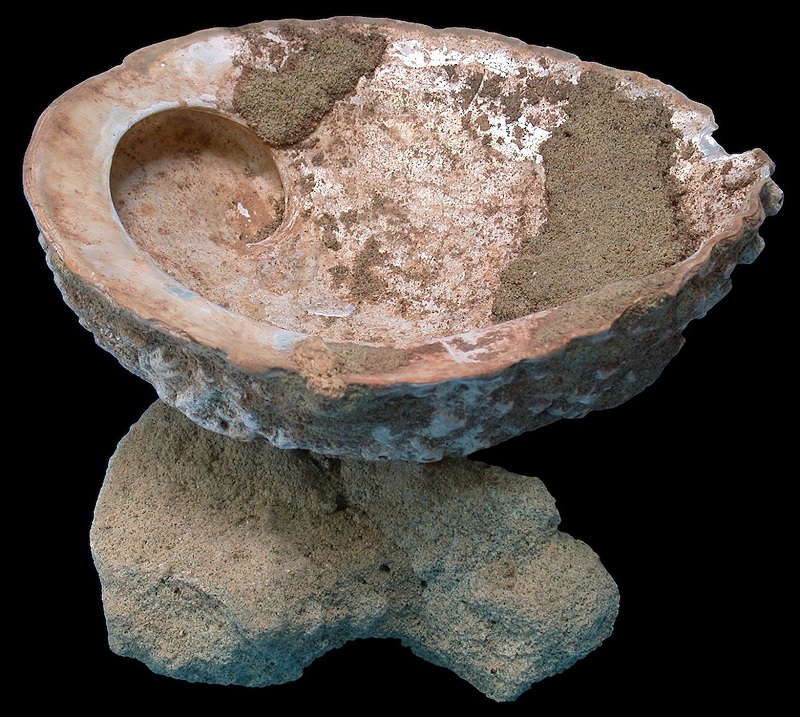 The Blombos Cave archaeological site has been under excavation since 1992 and over the years, they have discovered many artifacts. One of their most recent finds from 2008, was a paint making studio consisting of two toolkits dating back to 100,000 years ago. Researchers discovered traces of a red, paint-like mixture stored in two abalone shells.

They also found ocher (colored clay), bone, charcoal, hammer stones, and grindstones that they believe were used by early Homo sapiens to create the paints.

Although the researchers don’t know what the paints were used for, they do know that they used quartzite stones to grind the ocher down and combined it with the oil from the marrow of heated bones. 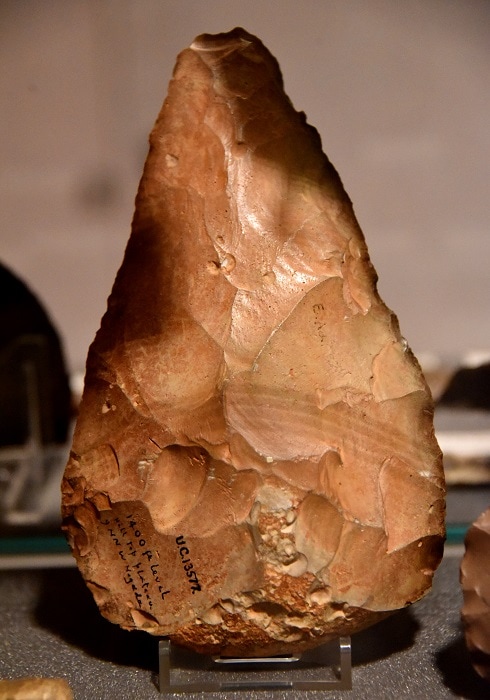 Acheulean Hand Axes were used throughout most of early human history. The tools are believed to have first been developed by Homo erectus about 1.76 million years ago and used until the Middle Stone Age (300,000 – 200,000 years ago).

The hand axes are named after the St. Acheul archaeological site in France where the first of these tools were uncovered in the late 1860s.

The oldest Acheulean hand axes were found at archaeological site Kokiselei 4 in the Kenya and are dated to about 1.76 million years ago.

The oldest hand axes found outside of Africa are about 900,000 years old and were found at two cave sites in Spain. 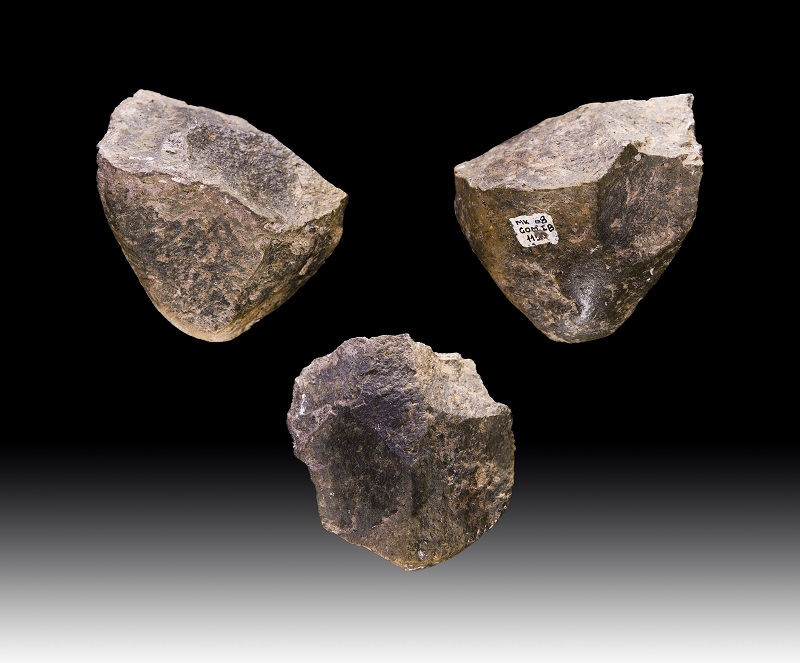 Until a 2015 research paper was published, the Oldowan stone tools found in Gona, Ethiopia were believed to be the oldest stone tools ever found. The oldest of the Oldowan tools was dated to about 2.6 million years ago.

Researchers aren’t sure who created the tools from Gona as no fossils were found near the artifacts. The tools might have been made by Australopithecus garhi, a hominid species that was discovered about 55 miles south of Gona, near animal bones that show signs of butchering — suggesting the use of tools.

The first Oldowan tools were discovered by famed paleoanthropolgist/archaeologist, Louis Leakey, in the 1930s; these tools are about 1.8 million years old. 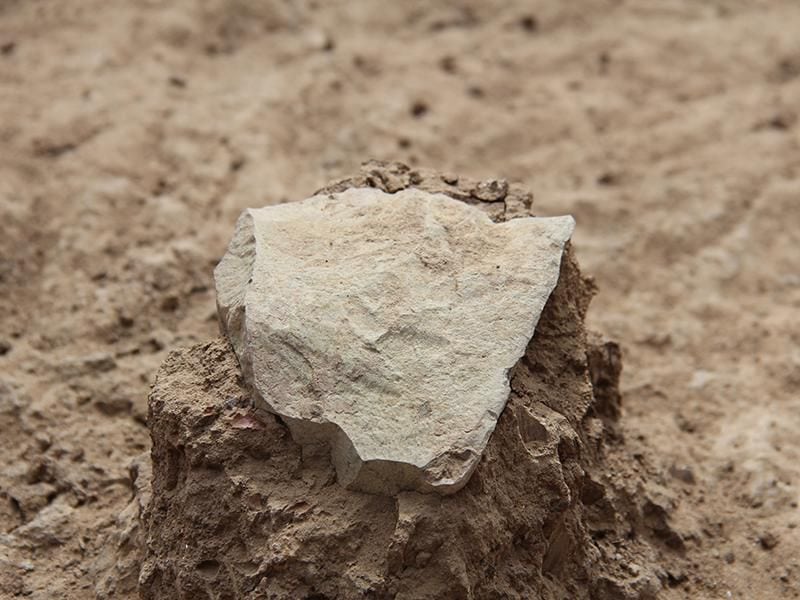 The stone tools unearthed at Lomekwi 3, an archaeological site in Kenya, are the oldest artifacts in the world. These stone tools are about 3.3 million years old, long before Homo sapiens (humans) showed up.

While researchers aren’t sure which of our early human ancestors made the tools, the discovery suggests that our ancestors had the mental ability to craft tools before any member of the Homo genus was even born.

Some of the artifacts uncovered at Lomekwi include anvils, cores, and flakes. The tools are the largest known stone tools and researchers suggest that they be classified as their own tool making tradition called Lomekwian.

8 Oldest Universities in the U.K.