As a large breed dog, boxers are not known for living very long. On average, boxer dogs only live for about 10.5 years and have an expected range of 9 to 12 years. According to AllBoxerInfo, boxers have high cancer rates and heart problems. It is pretty rare to see a boxer dog live into their teens. However, all of the boxer dogs on this list, lived well into their teen years.

All information in this list was gathered from AllBoxerInfo (ABI), which appears to be the only place keeping track of and documenting long-lived boxer dogs. In addition to the boxer dogs on this list, ABI also has a slideshow of pictures of other old boxer dogs, which were sent in to the site by their owners. Many of the dogs in the slideshow also lived into their teens, but more information is not available about their lives. 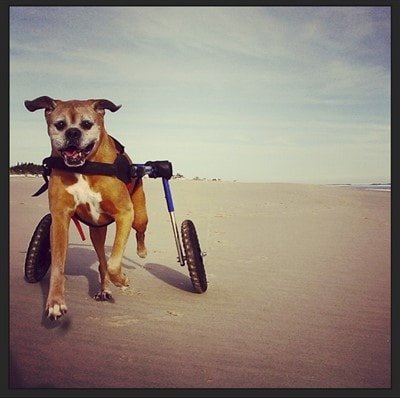 Roscoe is the only boxer dog on this list that has a special page dedicated to him on AllBoxerInfo. This is because Roscoe suffers from Canine Degenerative Myelopathy (DM), which is a progressive disease that affects the spine. DM weakens the muscles of the hind legs and affects coordination. Unfortunately, Degenerative Myelopathy commonly occurs in boxer dogs as well as German shepherds and Pembroke Welsh corgis.

Although Degenerative Myelopathy is a hard disease to deal with, Roscoe is lucky enough to have loving owners, Billy and Nicole Squier (yes, famous rock musician Billy Squier). The Squiers had adopted Roscoe when he was just 12 weeks old. Roscoe did not start showing signs of DM until later in life and he lost feeling of both his hind legs in 2015, when he was 13 years old.

Before and after being diagnosed with DM, Roscoe was very physically active. As Roscoe’s DM progressed, he began swimming as an alternative to walking/running. After becoming pretty much immobile in 2015, the Squiers decided to get Roscoe a wheelchair so he could walk on his own again. After a brief adjustment period, Roscoe was back to his playful self and running around on the beach.

The last time that Roscoe and the Squiers were interviewed by AllBoxerInfo was in 2017. We were not able to find any updates on Roscoe and he has most likely passed on.

Before meeting his wife Nicole, Billy Squier already had another boxer dog named Simon, who also had Degenerative Myelopathy like Roscoe. Simon passed away at the age of 12.5 after suffering from a seizure in his sleep. 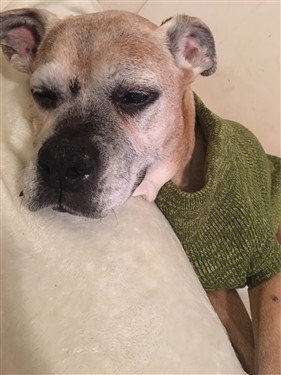 CeCe is the only female boxer dog on this list and was also 16 years old like the two oldest boxers on this list, Maccabee and Brewski. She died just four months after her 16th birthday. CeCe’s owner, Sophy Korm, said that CeCe died peacefully at home surrounded by her loved ones.

Like all older dogs of any breed, CeCe did have a few health problems in her later years. CeCe’s main issues were cataracts and arthritis, but overall she was healthy for her age.

In 2016, CeCe did have a health scare after she was attacked by a stray dog. CeCe had severe puncture wounds on her neck and hind leg. While the vet suggested that Sophy put CeCe down because of her extensive injuries, she was able to make a full recovery and live for another year.

Despite having arthritis and being injured on her hind leg in 2016, CeCe was still able to walk for up to a mile a day until she passed away. 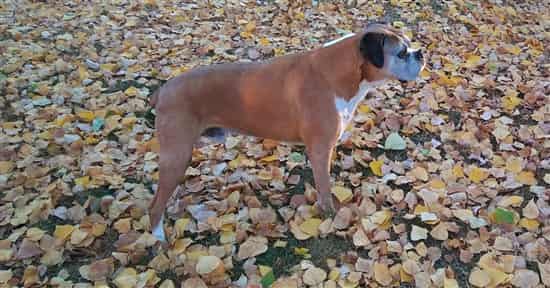 Brewski was also 16 years old like Maccabee, but was a few months younger when he died in 2017. Owned by Linda Klosterman of Vacouver, Washington, Brewski was a very active dog in his younger years. He loved to play and run with children.

As Brewski got older, he developed arthritis in his lower spine as well as inflammation in his larynx. However, Brewski’s heart and lungs were in repetitively good condition. Unfortunately, Brewski died after having an unexpected and severe seizure.

Although Washington is a fairly chilly state, Brewski had a low tolerance for the cold and preferred to stay inside during the winter months. 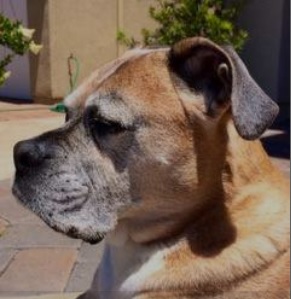 Maccabee was just a few months shy of his 17th birthday when he passed away during the summer of 2016, this makes Maccabee the oldest known boxer dog ever in the world. AllBoxerInfo does have evidence of Maccabee’s age, which were provided by his owner Jessica Kolis of Northern California.

Although Maccabee was healthy for most of his life, he did start to slow down when he was around eight years old. When he was 10, Maccabee had surgery on a ligament tear on his knee. As time wore on, Maccabee became partially deaf and blind.

According to Jessica Kolis, Maccabee lived so long because he had regular vet checkups and Kolis made sure to look after Maccabee’s teeth with regular brushing and dental treats. Maccabee was also never allowed off his leash and he received a lot of fun, mental and physical stimulation, and love.

Until his 16th birthday, Maccabee used to walk for one mile everyday. In his last few months of life, Maccabee’s walks were shortened to 20 minutes. 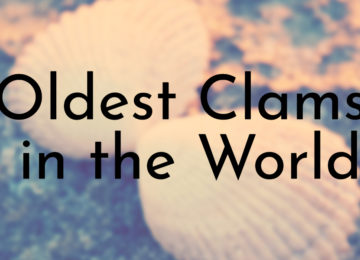 Posted by Lauren Johnson 0
Did you know there are more than 3,000 species of snakes on the planet, found everywhere except for Antarctica, Iceland,…